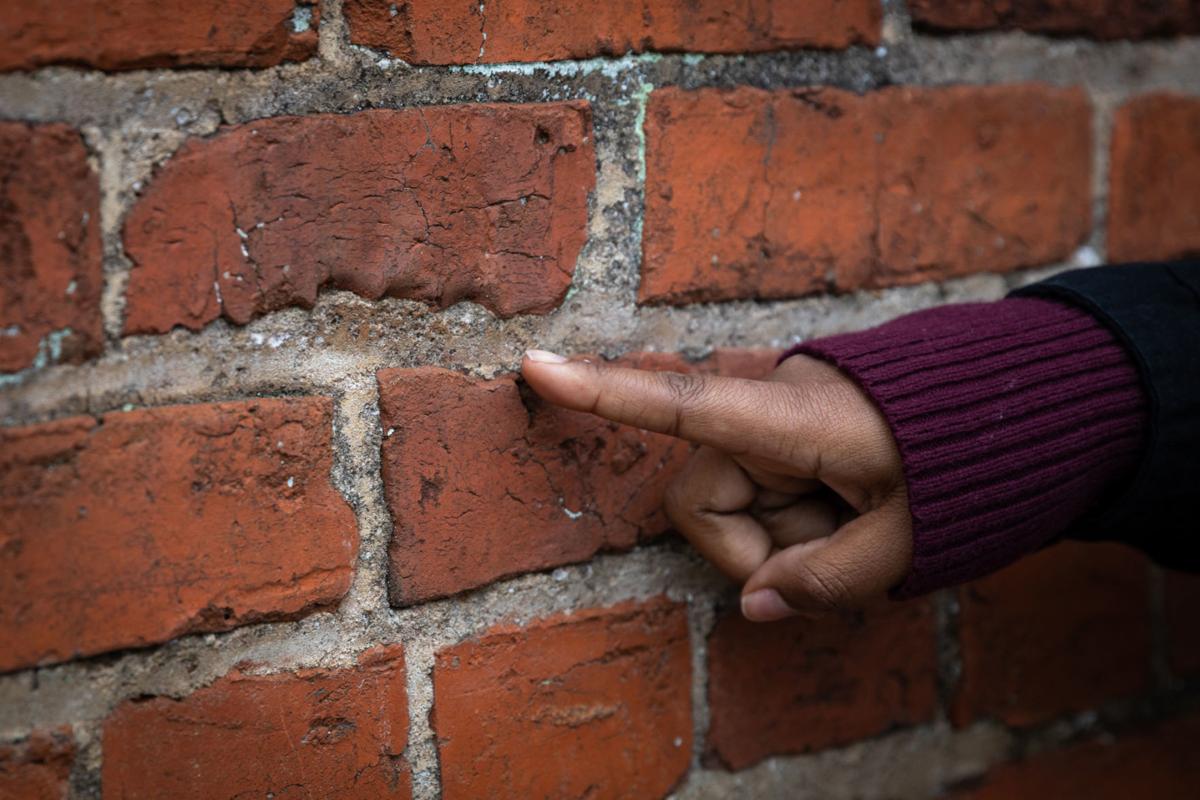 Khadija McNair, the assistant site manager at the Stagville Plantation in Durham, points to knuckle imprints left by enslaved builders on a brick chimney at a Horton Grove slave house. 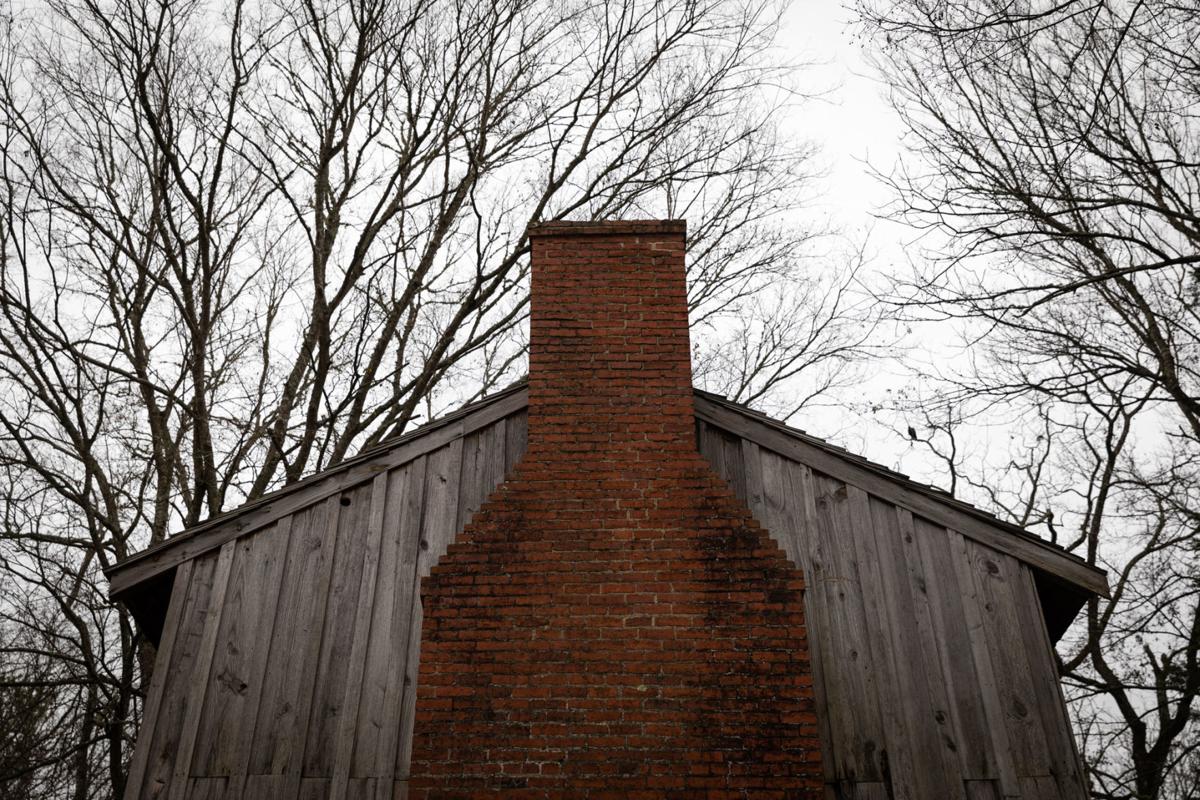 The brick chimney of a Horton Grove slave dwelling on the Stagville Plantation. Enslaved brick masons built the structures in the early 1850s. 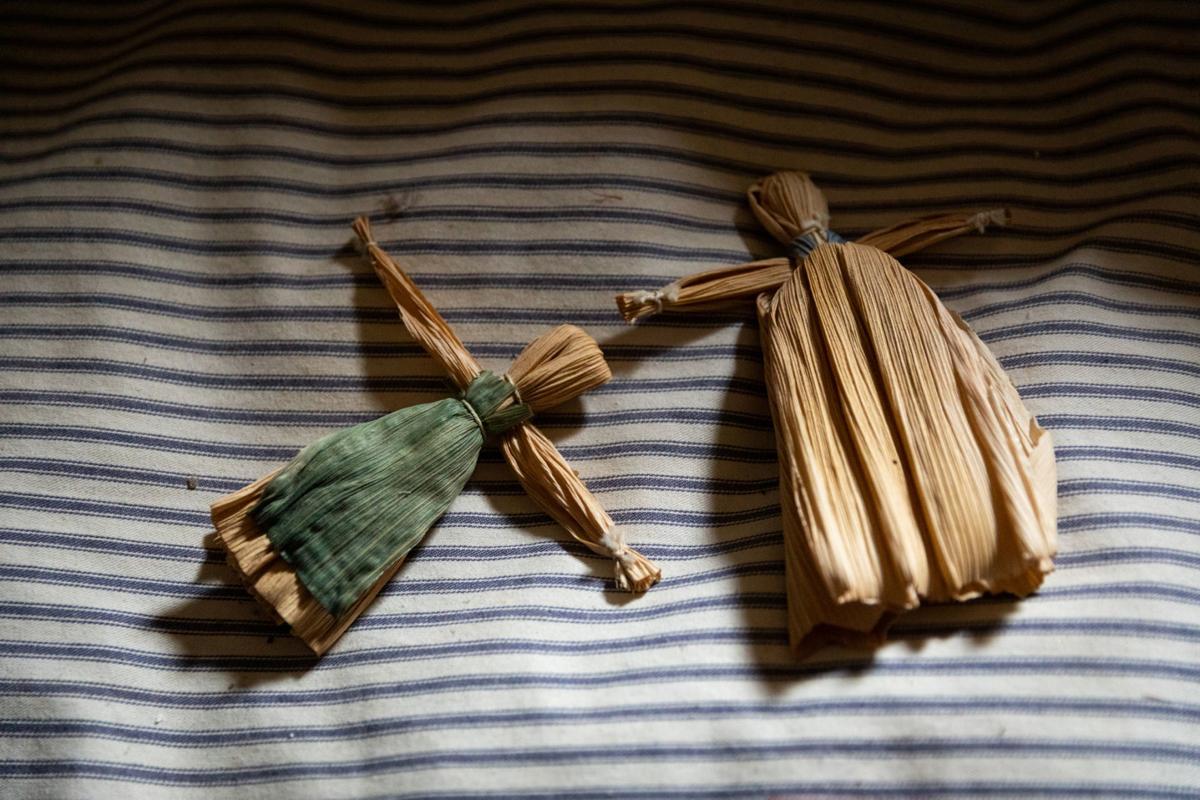 Children’s dolls lie on a bedside mattress inside a Horton Grove slave dwelling on the Stagville Plantation in Durham. It was illegal for slaves, including children, to be educated in North Carolina. 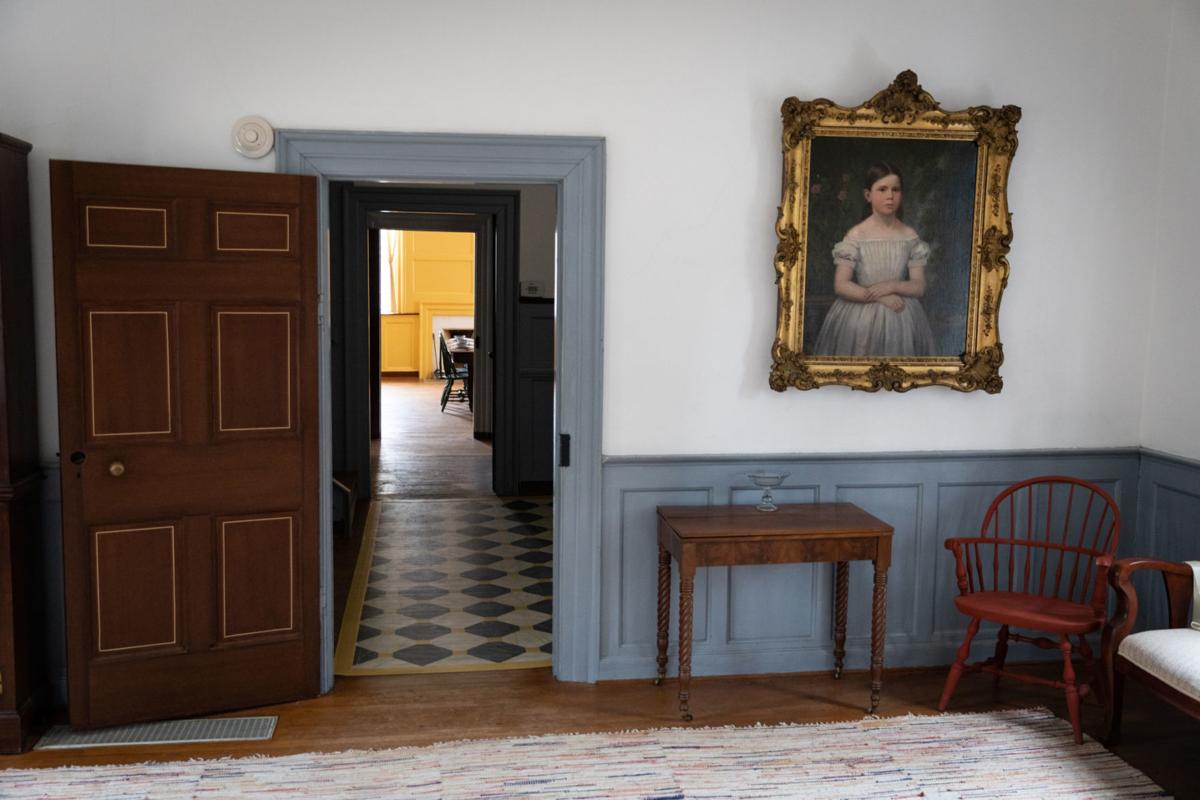 A portrait of Mary-Anne Cameron, one of Duncan Cameron’s daughters, hangs in the great room inside the Bennehan House at the Stagville Plantation. 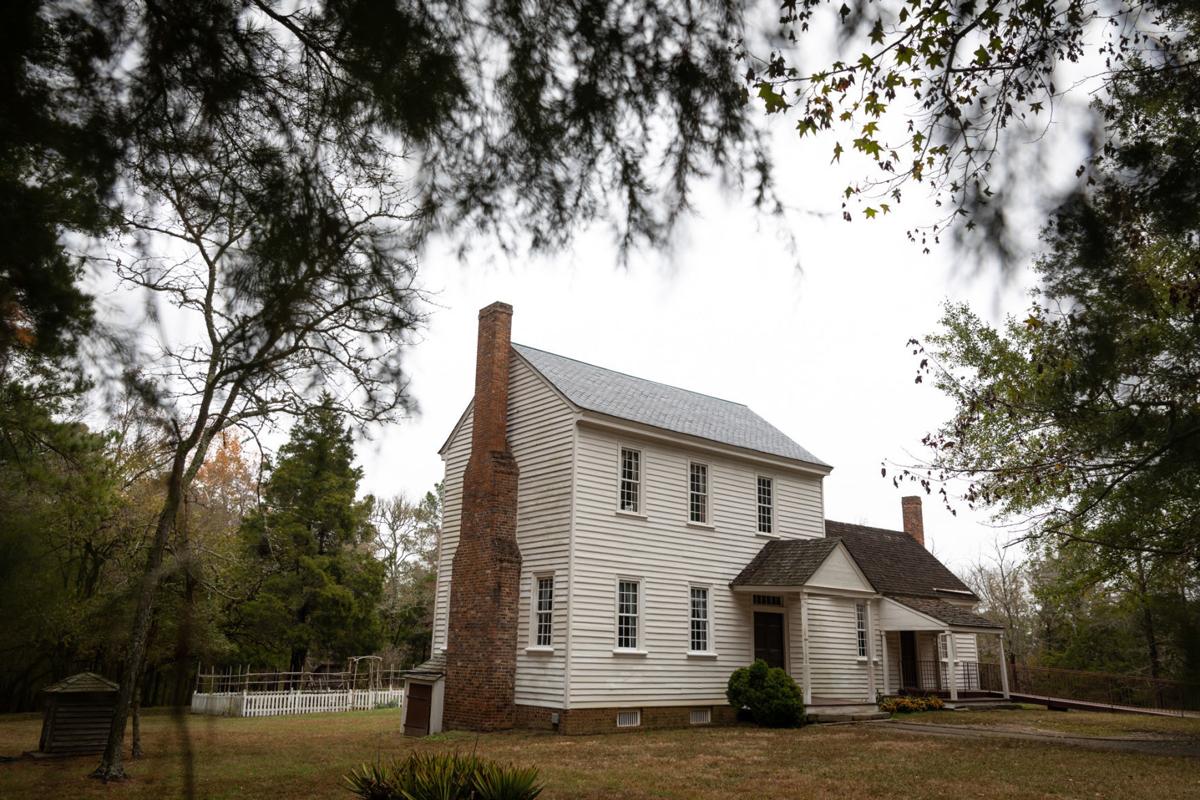 The Bennehan House at the Stagville Plantation. The structure was built in about 1787, with a two-story addition completed in 1799. Stagville was self-sustaining, and many slaves were trained as blacksmiths, barrel-makers and seamstresses. 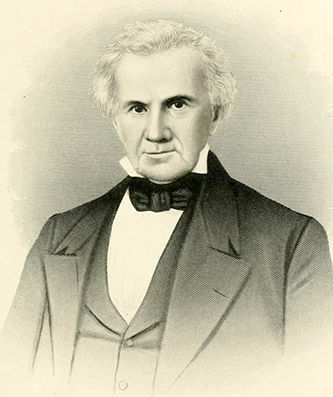 A portrait of Duncan Cameron hangs in the kitchen of the Bennehan House at Stagville Plantation.

Khadija McNair, the assistant site manager at the Stagville Plantation in Durham, points to knuckle imprints left by enslaved builders on a brick chimney at a Horton Grove slave house.

The brick chimney of a Horton Grove slave dwelling on the Stagville Plantation. Enslaved brick masons built the structures in the early 1850s.

Children’s dolls lie on a bedside mattress inside a Horton Grove slave dwelling on the Stagville Plantation in Durham. It was illegal for slaves, including children, to be educated in North Carolina.

A portrait of Mary-Anne Cameron, one of Duncan Cameron’s daughters, hangs in the great room inside the Bennehan House at the Stagville Plantation.

The Bennehan House at the Stagville Plantation. The structure was built in about 1787, with a two-story addition completed in 1799. Stagville was self-sustaining, and many slaves were trained as blacksmiths, barrel-makers and seamstresses.

A portrait of Duncan Cameron hangs in the kitchen of the Bennehan House at Stagville Plantation.

CHAPEL HILL — Every day, students at UNC-Chapel Hill walk down Cameron Avenue on the way to class. To their left sits Memorial Hall.

The students know this street as the center of campus. They know this building as the place where students come together. What they don’t know is that both are tied to the man who was North Carolina’s largest slaveholder, Paul Cameron.

Four hundred years since the first slaves were brought to America, the political power and status of slaveholders and the repercussions of slavery can still be felt in Orange County.

The stories of slavery lineage in the area follow two parallel tracks.

On one, the profits, ideologies and impressions of the Bennehan-Cameron family, who ran Stagville Plantation in Durham, are still recognized today in schools in Raleigh, in buildings at UNC and in monuments in Durham.

On the other, the contributions of the African American families who were emancipated from Stagville and who shaped these same communities can be felt, too.

In 1776, Richard Bennehan purchased 1,213 acres of land in North Carolina on which his family would run a plantation for the next 200 years. Known as Stagville, the Bennehan-Cameron family’s plantation would become one of the largest in the state, growing to nearly 30,000 acres and enslaving more than 900 people.

A plantation of this stature was unique for North Carolina, as only about 25% of the white adult population in the state were slaveholders and most owned fewer than 10 slaves.

Stagville was self-sustaining, and many slaves were trained as blacksmiths, barrel-makers and seamstresses. William Andrews, a professor emeritus of English at UNC and an expert in North American slave narratives, said that resulted in a sort of class system among the slaves.

“Because workers who have more skills have more leverage with their owner, they know they’re valuable and they are able to get certain kinds of opportunities, or privileges as it was called.”

The Bennehan-Cameron family did not work on the land, as most other slaveholders in the state did. Family members involved themselves with various industries and organizations in the state. In particular, Paul Cameron — who brought the plantation complex to its peak in the 1860s and was one of the wealthiest men in the South — left his mark through involvements with various institutions, especially the University of North Carolina.

The son and nephew of active trustees of the university and the grandson of one of its earliest benefactors, Paul Cameron entered UNC in 1823 but did not graduate. Still, he later returned as a trustee and chairman of the alumni association.

After the Civil War, UNC closed from 1870 to 1875. Former Gov. and UNC President David Swain donated money to help reopen the university. A political acquaintance of Swain’s, Cameron became involved, visiting campus frequently and donating money. He contributed $8,000 to build Memorial Hall, and he delivered the dedication speech in front of the street that now bears his name.

In a note to a friend, Cameron wrote: “If I deserve credit for any work of my life it is for the part I have taken in discharge of my office as a Trustee of the University; steadfast and true to its interests at all times, and anxious now to make it in future the best ornament of the State. I am glad to recall that I was able to save the Trustees in 1859-’60 from the humiliation of seeing the new East and West Building left standing incompleted for the want of funds — and Memorial Hall in ’84-’85 would have stood uncovered and unfinished if I had not willingly advanced the necessary sum.”

Andrews said that even though Reconstruction offered hope for future public education, it did not offer much hope for the slaves who had been emancipated from Stagville and other North Carolina plantations. Their opportunities didn’t reflect the freedom they had been given, and Cameron used this to his advantage.

Shortly after UNC reopened, Cameron gave a speech at the UNC Normal School in which he expressed his disapproval of Reconstruction.

“Four thousand years of alternate wilderness and domination has not materially changed the African,” he said. “If the race were blotted out today, it would not leave behind a city, a monument, an art or an invention to show that it ever existed.”

Experts such as Andrews and the staff at Stagville dedicate their work to sharing the narratives of slaves.

“I think those are all reasons why I find these narratives, No. 1, tremendously inspiring — because they show us a side of America that we can genuinely be proud of: the heroes and other people who resisted this institution and overcame it,” Andrews said. “And the other side of the coin: the depravity of so many of the people who were part of it and who didn’t free themselves from it, even though they were white and could have.”

Today, employees at Historic Stagville and the ancestors of those emancipated from there join together to make their own marks on North Carolina — to share the other parallel track.

As the assistant site manager at Historic Stagville, Khadija McNair stays in contact with many of the ancestors of the plantation’s slaves.

“A large part of our work is working with descendants of enslaved communities here,” McNair said. “We have a large community of descendants. People come back and have fun reunions here.”

Of the countless individuals who can trace their ancestry to Stagville, hundreds are living in the Triangle, just miles from where their ancestors were enslaved.

“Those families are living in towns and cities that have been shaped by the profits that were taken from slavery here,” said Vera Cecelski, Stagville’s site manager. “And those families continue in some places and spaces to be in community with each other in church congregations and schools and neighborhoods, bound together still partially by having endured this place and having endured the generations after emancipation together.”

Ricky Hart remembers his father taking him to the Hart House at Stagville as a child. His father, born in 1922, had lived and worked on the land until he married. Even though slavery was over, many generations remained on the plantation.

“I think people don’t realize that,” Hart said. “My uncle, who was the oldest boy, he stayed out on the plantation until 1975. He stayed because he was in the same house he was born and raised in.”

For years after leaving Stagville, Hart’s family members continued to work in agriculture. Today, he and his five remaining siblings still live and work in the Durham area, miles down the road from Historic Stagville. They have worked hard to gather the stories and documents of their ancestors and to learn the stories of their loved ones — to keep their memories alive.

“When you break down history as we do in the black community, it becomes ‘his story,’ ” Hart said. “I take it and change it to my story. It’s our story.”

Writer Olivia Clark is a senior from Charlotte majoring in reporting.

Photographer Nathan Kilma is a senior from Chapel Hill majoring in photo/video journalism and global studies.