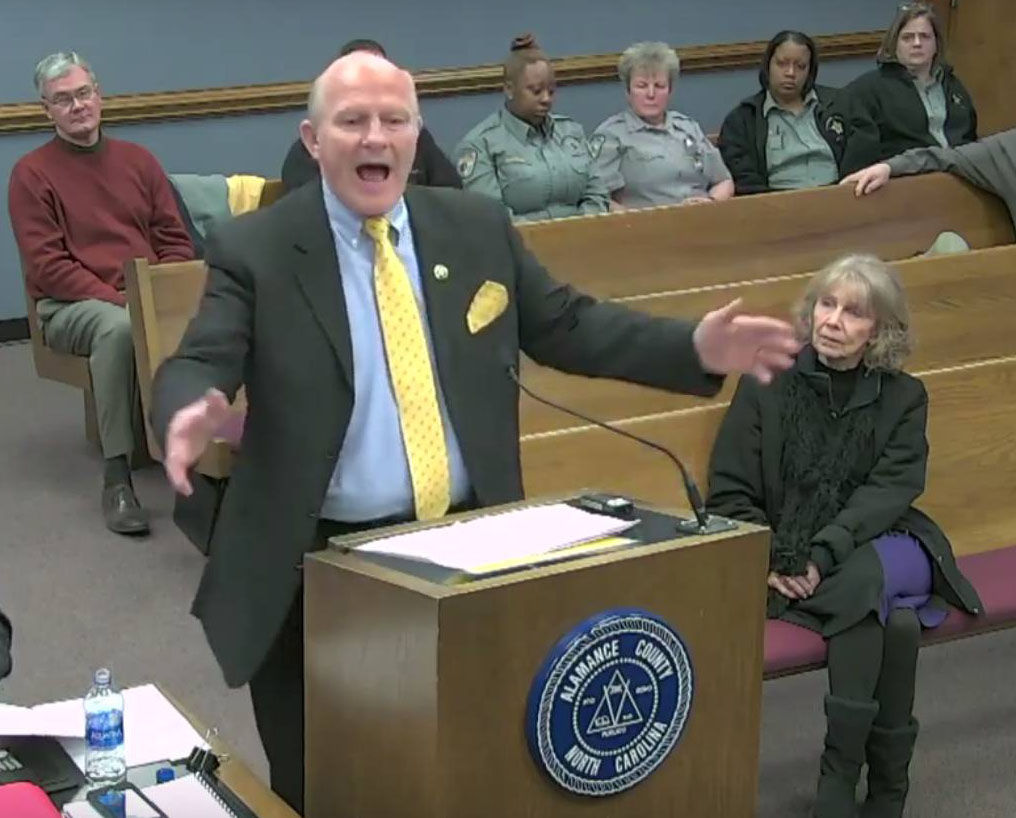 Terry Johnson asks the Alamance County Board of Commissioners earlier this year to add $2.8 million in federal funding to his budget to house inmates for Immigration and Customs Enforcement and the U.S. Marshals Service. 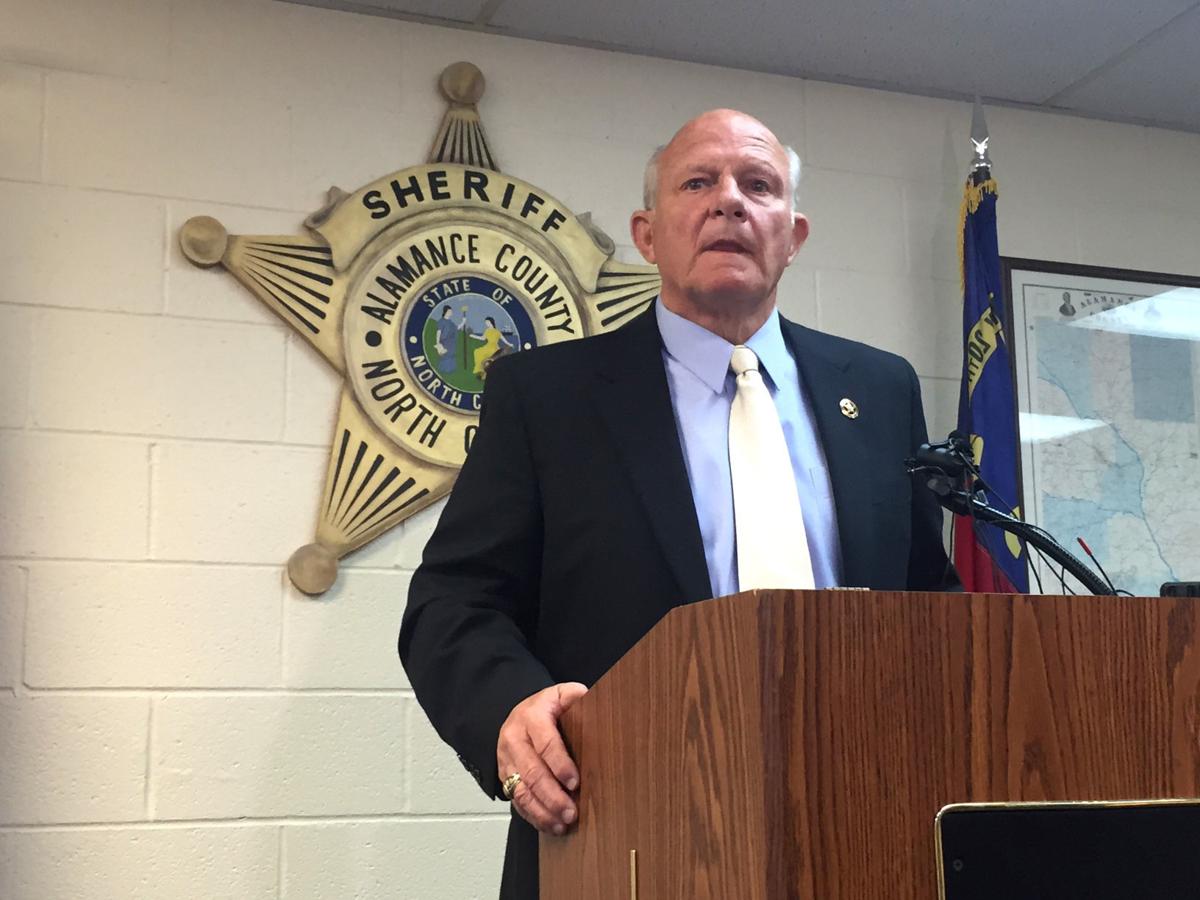 Alamance County Sheriff Terry Johnson says that he didn’t hesitate when the federal government approached him about housing immigration detainees. 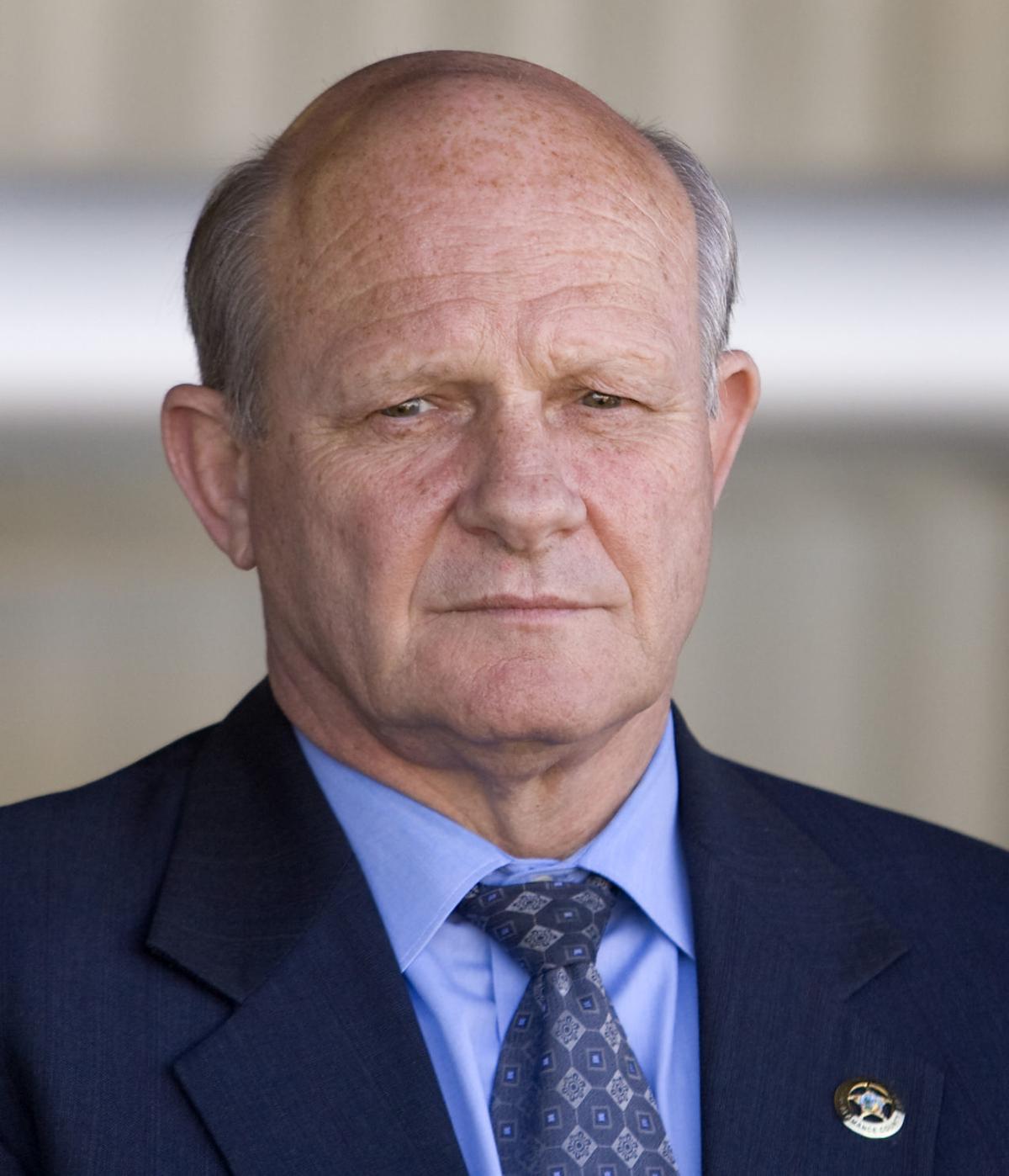 Terry Johnson asks the Alamance County Board of Commissioners earlier this year to add $2.8 million in federal funding to his budget to house inmates for Immigration and Customs Enforcement and the U.S. Marshals Service.

Alamance County Sheriff Terry Johnson says that he didn’t hesitate when the federal government approached him about housing immigration detainees.

Alamance County Sheriff Terry Johnson once allegedly told his deputies to “bring me some Mexicans” and “go out there and get me some of those taco-eaters,” according to a federal investigation.

During a county board meeting this year, he accused “criminal illegal immigrants” of “raping our citizens in many, many ways.”

The racial discrimination coming from his department was so severe, according to a lawsuit by the Department of Justice, that Latino drivers were between 4 and 10 times more likely to be stopped by his deputies. (That lawsuit was settled in 2016.) Even U.S. Immigration and Customs Enforcement distanced itself from Johnson, canceling a partnership that allowed his office to act on the agency’s behalf and citing his “discriminatory practices.”

In February, though, ICE negotiated a $2.3 million contract to house its detainees in Alamance County Detention Center, about halfway between Greensboro and Durham. More recently, the agency has sent Johnson’s jail dozens of asylum-seekers through that agreement, ICE spokesman Bryan Cox confirmed to The Observer.

Besides showing how the border crisis is quietly reaching North Carolina, the unexpected, unannounced arrival of the migrants in Alamance has also raised concerns among local lawyers and activists. They worry about putting asylum-seekers — fleeing violence and corruption — in a facility run by Johnson, who has a history of alleged civil rights violations against immigrants and Latinos.

“They’ve basically been using Alamance as a processing center,” said Atenas Burrola, an immigration lawyer at Mi Maletín in Durham who has advised the migrants. “As the beds keep emptying, ICE keeps filling them up.”

Cox said in a statement that the agency “considers many factors when selecting detention facilities,” with “the foremost factor being ICE’s operational need for any given facility.”

But he also hinted that political shifts in local law enforcement across the state, especially in Mecklenburg and Wake Counties, have limited where ICE can operate — perhaps with unintended consequences.

After newly elected sheriffs in the state’s biggest counties cut contracts with ICE, the agency says it lost most of its bed space in North Carolina jails. ICE has turned to Alamance instead, as it struggles to provide beds for a surge of migrants crossing the U.S.-Mexico border.

Activists, however, charge ICE is rewarding Johnson for his political loyalty through millions of dollars in federal funds.

“He has demonstrated that he does not have respect for the rights of immigrants,” said Andrew Willis Garcés, an organizer with the immigrant rights group Siembra NC. “He’s put forward a totally false narrative to get this funding.”

Johnson told the Observer that he didn’t hesitate when ICE approached him about housing immigration detainees. The jail now holds about 50 to 60 of those detainees each day, including asylum-seekers, individuals arrested by ICE or picked up at other county jails.

“I owe it to our state and to our county to have secure homeland security,” he said in an interview. “We need to assist ICE in their endeavor to rid our country of serious criminal violators.”

Depending on how they arrived in the U.S., migrants have not necessarily broken the law. But Johnson also said asylum-seekers needed to follow set procedures, just as his office needed to enforce the law.

“If they’re seeking asylum in this country, they’re going to be held until the process can be run to effectively and legally let them into our country,” he said. “There has to be a process. I didn’t develop that process.”

Since May, Burrola said, Alamance’s jail has housed about 30 to 40 adult men at a time, including asylum-seekers from Cuba, Brazil, Mexico and China who recently crossed the southern border near Brownsville, Texas.

Burrola has spoken to migrants who have been detained in Alamance for as long as two-and-a-half months, she said, waiting for what’s called a “credible fear interview”: A phone call with an asylum officer in Arlington, Va., who determines if a migrant has a “credible fear” of persecution in their home country — or if they should be placed in deportation proceedings instead.

It’s a process that’s supposed to happen quickly, lawyers say, and often occurs right on the border. In other cases, it might happen at a facility specifically built to detain immigrants, like the 1,750-bed Stewart Detention Center in Lumpkin, Ga.

Changing policies and an unprecedented surge of migrants arriving at the border, however, have put strains on the system. There’s an increasingly long backlog for interviews and less bed space.

As ICE’s own detention facilities have reached capacity, Cox said, it has sent asylum-seekers to a handful of county jails across the country. They have ranged from a thousand-person facility in rural Mississippi to a smaller jail in Albany, N.Y.

Dedicated detention centers like Stewart, run by the for-profit company CoreCivic, offer legal orientations to asylum-seekers in which lawyers describe the asylum process and can answer questions.

But that hasn’t been the case in Alamance, where many asylum seekers underwent their interviews before being able to consult with Burrola or another lawyer about the process — potentially hurting their chances of staying in the U.S, she said.

Burrola pointed to the case of a 19-year-old from Cuba, who did not know that the interview would be kept confidential. As a result, the man did not tell officers about being attacked by Cuban police — information that she said could have turned his negative finding into a positive one.

The 19-year-old was sent back to Stewart, where he will begin deportation proceedings before a court inside the detention center.

Most asylum-seekers receive a positive credible fear finding in the interview, though the Trump administration has been trying to limit the categories migrants can use to claim that fear.

This winter, the agency sent hundreds of asylum-seekers to the county jail in Charleston, S.C., to await their phone screenings. As migrants were cycled in and out of Charleston, Burrola said, she and other lawyers provided pro bono legal aid, often showing up early in the morning and late at night.

But in March, Charleston County Sheriff Al Cannon announced that the jail would stop housing asylum seekers. The detention center needed to fill 85 openings in order to be fully staffed, he said, and cutting down on immigration detainees would address the overtime burden.

Weeks after that happened, Burrola learned that asylum-seekers had begun arriving in Alamance. She suspects one jail’s capacity has replaced the other, she said.

ICE has pointed to other shifts in terrain: From 2013 to 2018, Cox said, the agency did not use its contract with Alamance.

Last year, under newly elected sheriffs, Mecklenburg and Wake Counties ended their contracts — which he said previously accounted for “most of” ICE’s detention space in the state.

Since March, the federal agency has paid the county $6,750 per day to house a minimum of 50 immigration detainees, regardless of whether those beds are filled, plus $135 for each additional detainee, Johnson said.

(In contrast, ICE pays CoreCivic about $100 for each day a detainee is kept in Stewart, which has long been near, at or over capacity, according to Marty Rosenbluth, a lawyer at Durham’s Polanco Law Firm.)

Burrola said there is, in some sense, a silver lining to the arrival of asylum-seekers in Alamance. Although the jail has lacked proper legal orientations, it is geographically closer to pro bono lawyers like her, who can advise migrants on their asylum cases.

In comparison, less than five such attorneys live in all of South Carolina, she said, and Rosenbluth is the only immigration lawyer who lives near Stewart.

But unlike Charleston, Alamance lacks online infrastructure that allows Burrola to track which asylum-seekers are still being held inside the jail.

While detainees are allowed to go outside in Stewart, migrants in Alamance and Charleston have been held in jail for months without ever seeing the sun, she said.

Willis Garcés, the Siembra NC activist, also alleged that an immigration detainee held in the county jail last month had been denied food for as long as three days.

The Alamance County Sheriff’s Office called those allegations a “total falsehood.” That detainee did not file a complaint with the jail and appeared to be eating on video recordings, Johnson said.

For activists, lawyers, and politicians who have pushed local law enforcement to cut ties with ICE, these trade-offs ultimately get at a much larger question that has become increasingly relevant in the Carolinas.

If Mecklenburg and Wake hadn’t cut their jail contracts short, would the asylum seekers have ended up there instead? If lawyers hadn’t overwhelmed the Charleston sheriff, would the migrants be there instead?

“It’s a game of whack-a-mole,” Burrola said. “You win in one place, but then the fight moves somewhere else.”

For her and others, though, it’s a game worth playing.

“Any county that takes money to criminalize asylum seekers is hurting our society,” Willis Garcés said, “and undermining everything this country is supposed to be about.”