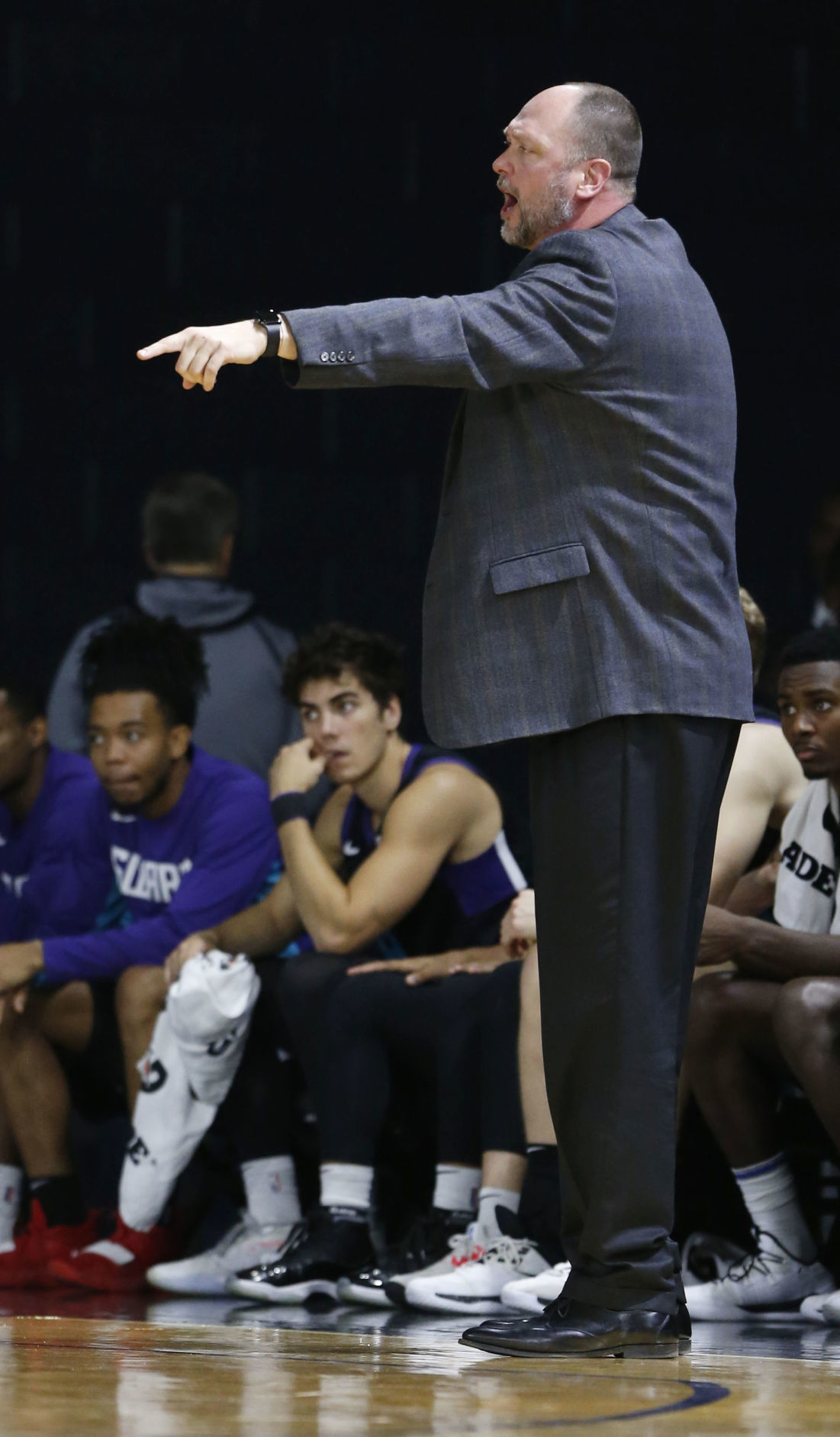 Greensboro Swarm head basketball coach Joe Wolf directs his team from the sideline during the game against Westchester in Greensboro, N.C., on Wednesday, November 13, 2019. 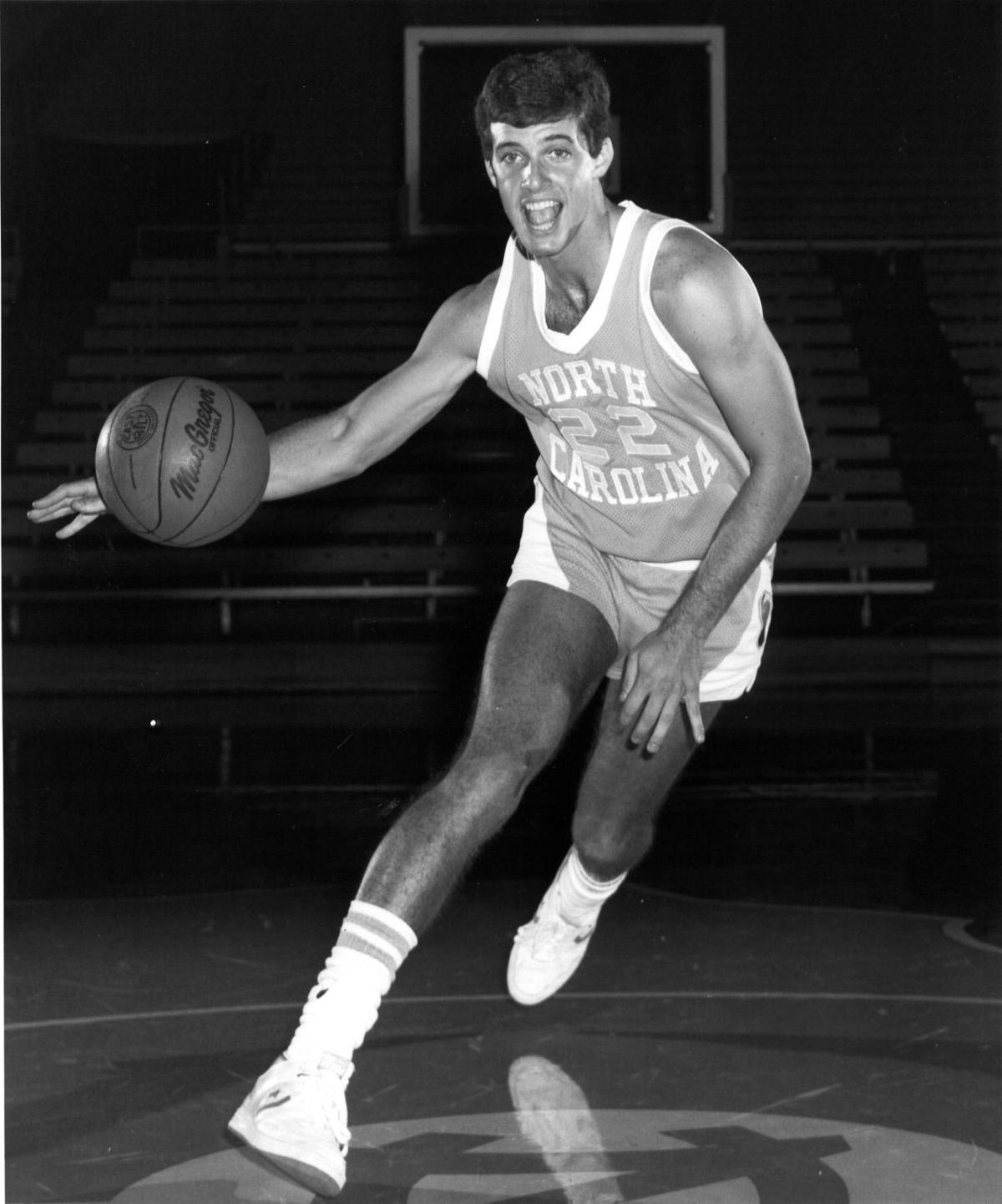 Buzz Peterson and Michael Jordan entered Carolina together to begin play during the 1981-82 basketball season. 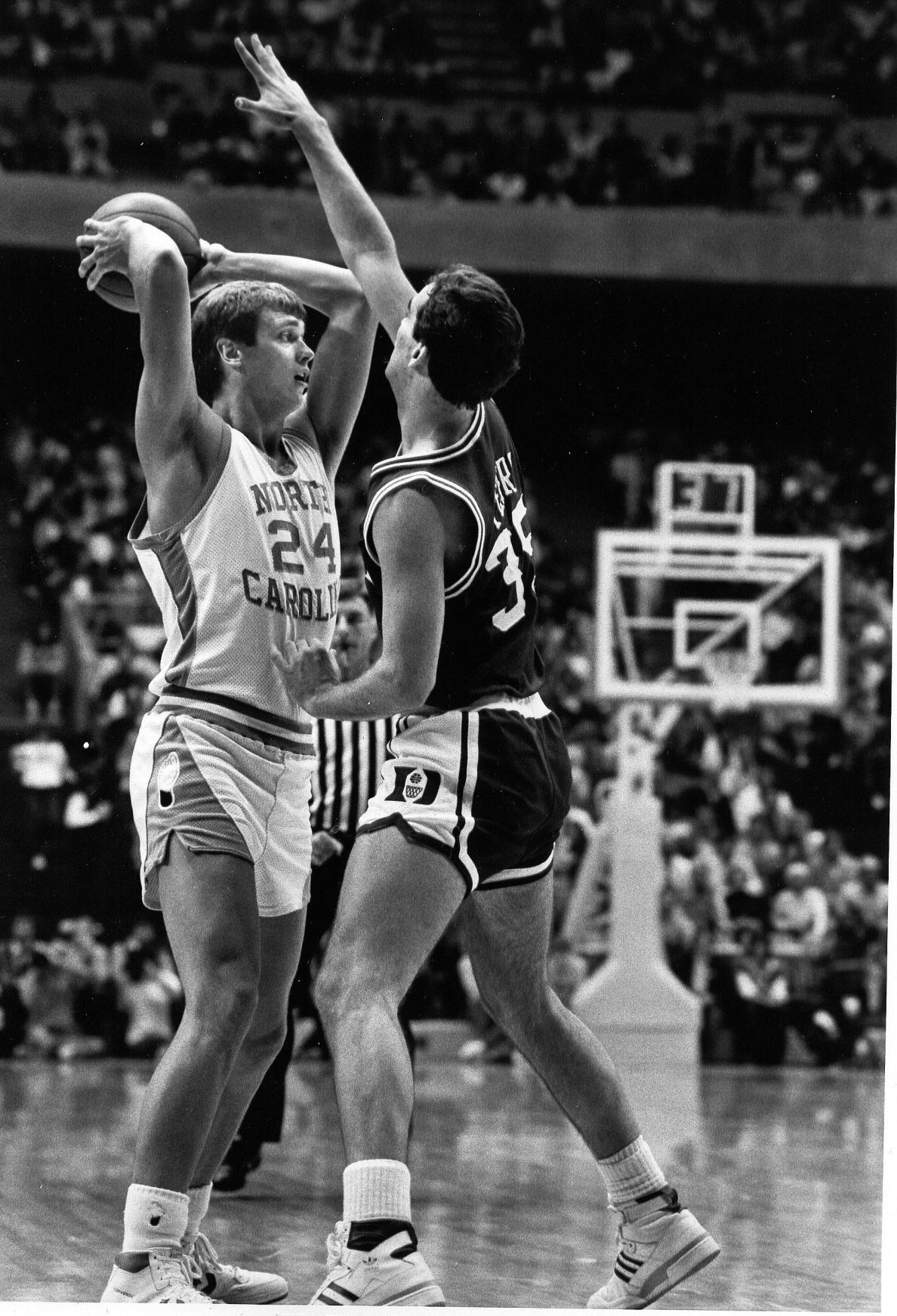 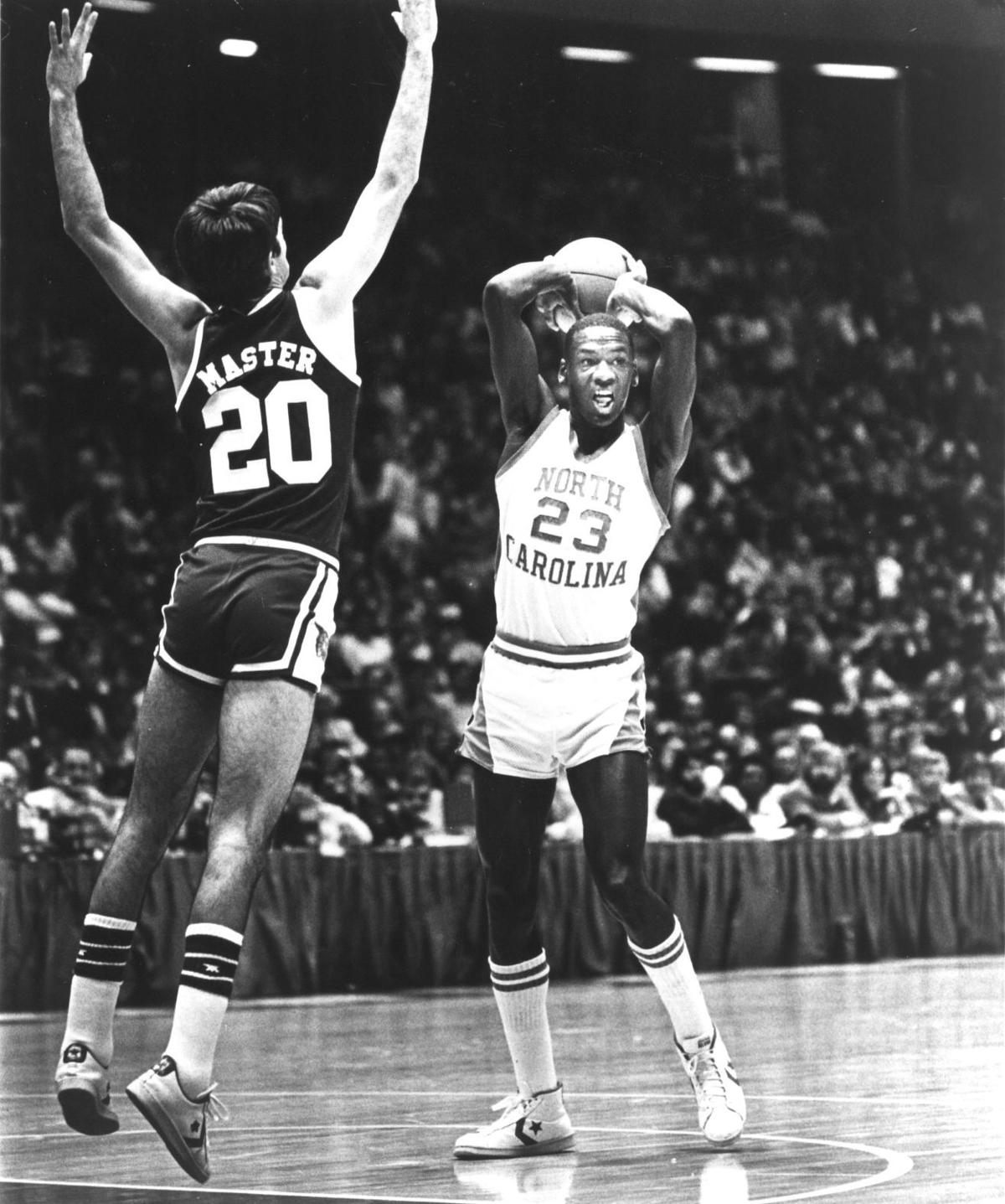 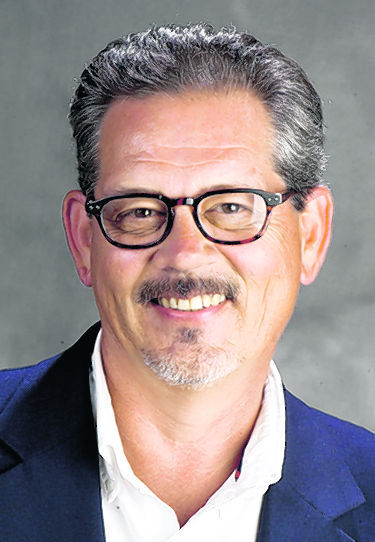 As we await two more new episodes of the basketball documentary “The Last Dance,” a couple of Michael Jordan’s former college teammates reminisced this week about another last dance with the man who is now their boss.

Joe Wolf and Buzz Peterson were at Carolina in 1984 when Jordan and the Tar Heels went on a wild ride that looked for a while like they would go down in history as one of the greatest college basketball teams of all time.

But that dance didn’t end the way they dreamed.

“We knew we were great,” said Wolf, now the coach of the Charlotte Hornets' NBA G League team in Greensboro. “We knew we had a chance to win it all. I just remember being in that locker room after it ended just bawling my eyes out.”

That NCAA Tournament loss to Indiana was Jordan’s last college game. It was the end of a great story and the beginning of a fairy-tale career in the NBA.

The story of Jordan’s rise from his parents’ driveway in Wilmington to that last season at Carolina is vaguely familiar to most of us. But there are stories we don’t know that help explain how he went from a frustrated junior varsity player at Laney High School to maybe the best player in the history of the game.

“It all started in that driveway,” said Peterson, now the assistant general manager for the Hornets, owned by Jordan. “He had two older brothers. A lot older. And they would beat the crap out of him everyday. That’s where that competitive drive started. He just wanted to beat his brothers.”

Those brothers, by the way, are now on Jordan's staff in Charlotte.

Jordan said in a recent interview he was worried about how he would be portrayed in the documentary, how he famously demanded every teammate put every ounce of energy into every single game and every single practice.

If not, they risked confrontation with the most competitive man in the game.

“He had that instilled in him,” Peterson said. “It came from his family.”

Wolf said Jordan brought that from Wilmington to Chapel Hill. And it didn’t end on the basketball court.

“I had known Michael since the ninth grade.” Wolf said. “We had played against each other at Coach Smith’s camp. To be around him everyday and see that competitive drive in every aspect was amazing. But we were all like that. Coach Smith recruited confident and competitive players of high character. That’s who we were. It didn’t matter if it was practice inside Carmichael or pickup games at Granville Towers. It was even that way when we played ping-pong and pool.”

Wolf tells an amazing story of how he and team manager Dean McCord would play a high-powered game of ping-pong every night after games or practices.

“We were the best two players by far,” he said. “No one else was close. But every single night, Michael would watch us and wait to play the winner. He lost all the time. But he would still challenge me every night. I mean every night. And eventually, he got better. Eventually, he was better than us at ping-pong.

“And the same thing happened with pool. I was the best pool player for a while, before Steve Bucknall came over from England. Michael played me because I was the best, but Bucknall had played snookers in England, and when Michael realized that he was better than me, Michael left me in the dust and played Bucknall every night.”

Peterson said it didn’t matter what game it was or just elements within the games. Jordan was going to get better at something every year of his life.

“I’ve known Michael since the summer of 1980,” he said. "We met at the North Carolina basketball camp, though we never saw each other play. We knew of each other. He just walked up to me one day and said, ‘Hey, my name’s Mike Jordan. I’m from Wilmington.’ We became friends. And we became competitors.”

Peterson played at Asheville High School on the other side of the state from Jordan, but they competed anyway. And when Peterson and not Jordan was named high school player of the year in North Carolina, well, let’s just say Jordan has never forgotten it.

“He still talks about it,” Peterson said.

“I remember talking to him that summer about camps I was going to, and he didn’t know about any of them," Peterson said. "It angered him a little to hear that the top 200 players were going to a camp in Atlanta or the Five-Star Camp that he didn’t know about.”

Roy Williams, then a Carolina assistant coach, would later watch Jordan in a pickup game and call Howard Garfinkel to arrange his invitation to Five-Star, a weekend that Jordan would later say “changed how I felt about basketball. It was the turning point in my life.”

Peterson said to watch Jordan’s game develop year after year was amazing, even though he had his own dreams of playing in the NBA one day. Playing against Jordan every day, he said, was hard.

That last season before Jordan would go pro, Carolina won its first 21 games and went undefeated in the ACC. Six players would go on to play in the NBA, and Jordan would indeed go on to be one of the greatest to play the game.

But the last dance at UNC would end in injury and defeat, first freshman point guard Kenny Smith against LSU and then Brad Daugherty in the NCAA Tournament. Jordan even fouled out of his final game, limited to 13 points.

“He was hungry,” Wolf said. “He never took a day off. We had a special team and we worked hard. And it didn’t matter what game we were playing.”

Peterson said it was more than a month after that season when Jordan decided to go pro, but even then he was torn.

“We’d been out the night before, I think with Davis Love,” Peterson said. “I remember the last thing I asked him that night when my head hit the pillow. I asked him what he was going to decide that next day.”

Jordan’s last dance at Carolina ended the next day.