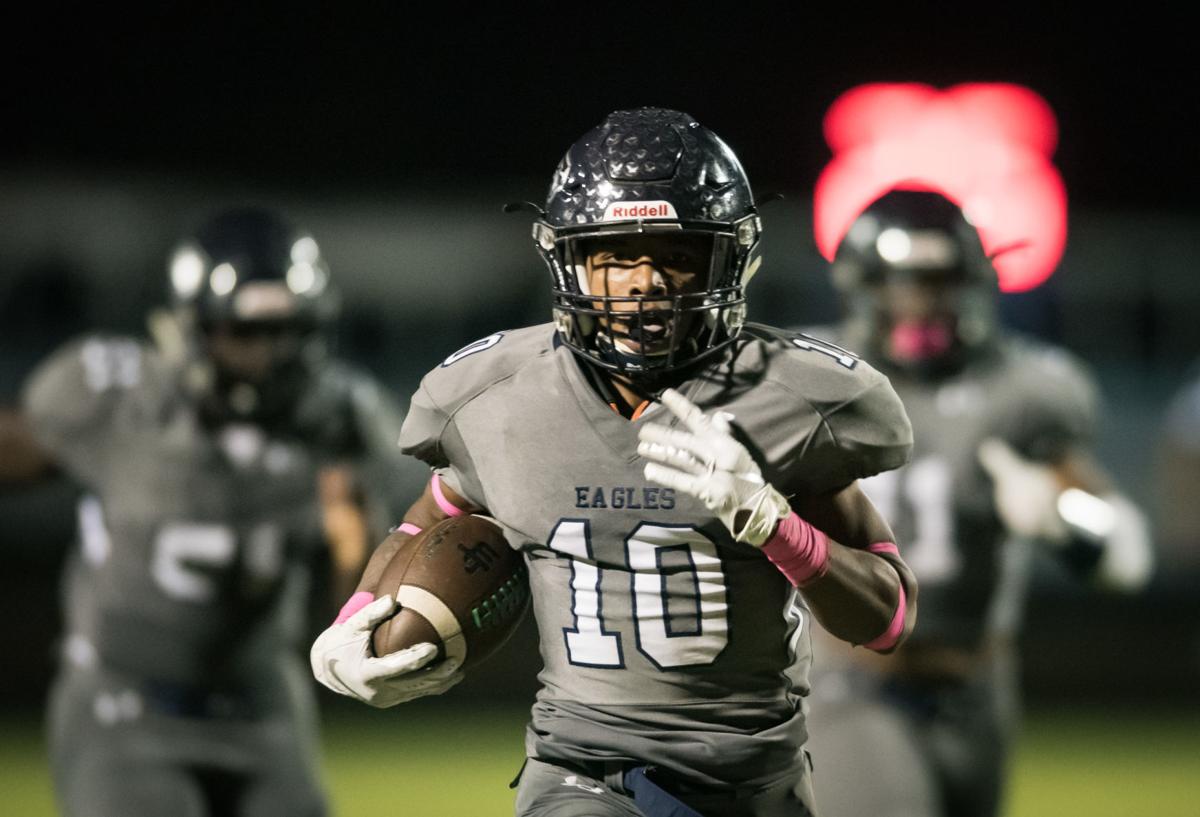 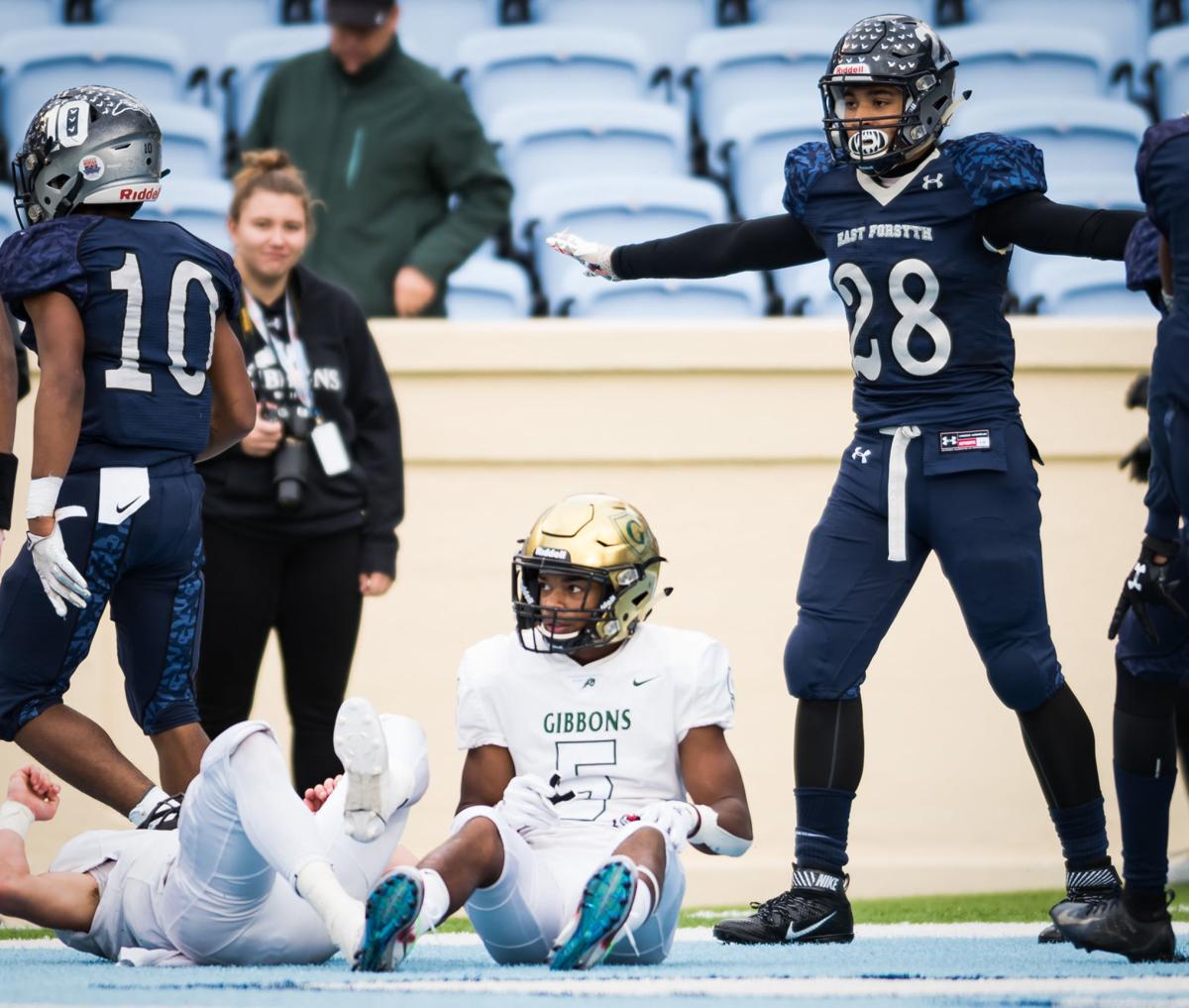 East Forsyth's Elijah Thomas (28) celebrates after a pass intended for Raleigh Cardinal Gibbons was stopped by the defense in the fourth quarter of the NCHSAA Class 4-A title game on Dec. 14 in Chapel Hill. 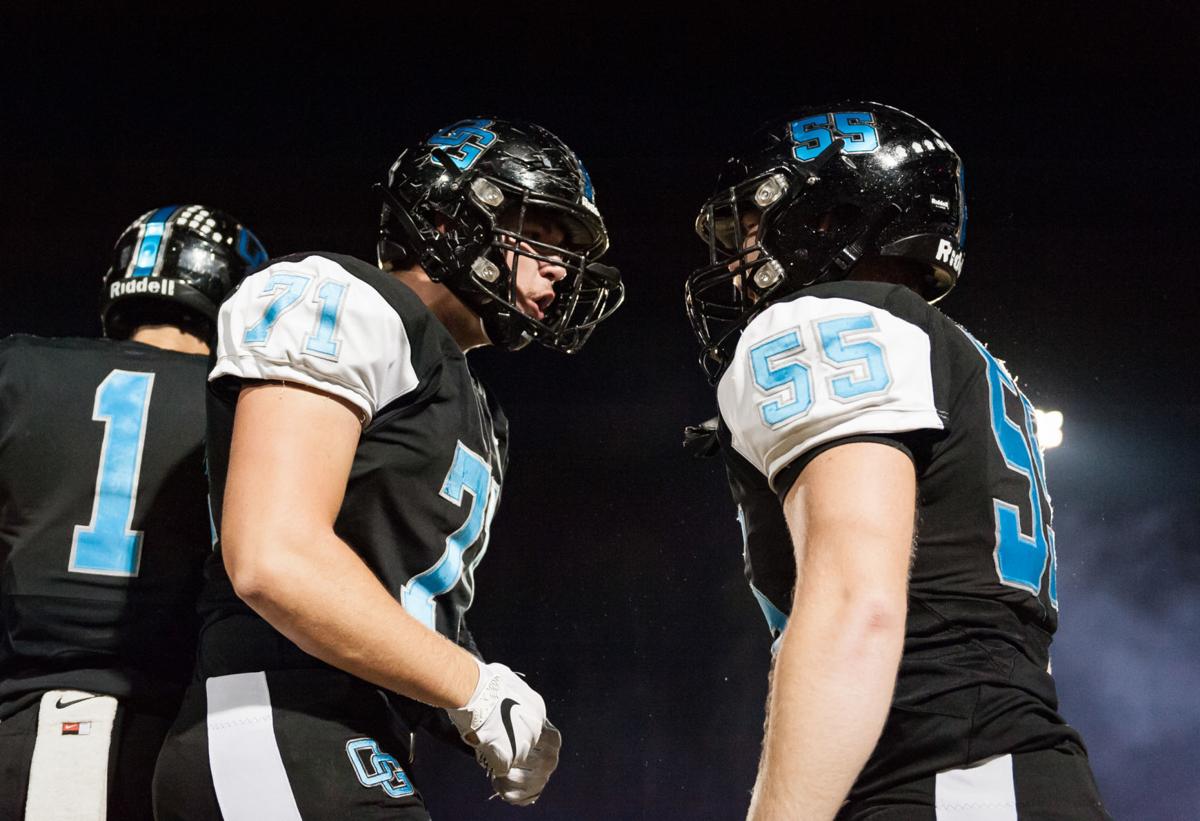 Oak Grove seniors Nikolas Everhart (71) and Logan Boyer (55) get pumped up prior to the first quarter of a Central Carolina 2-A conference football game on Oct. 25 in Midway. 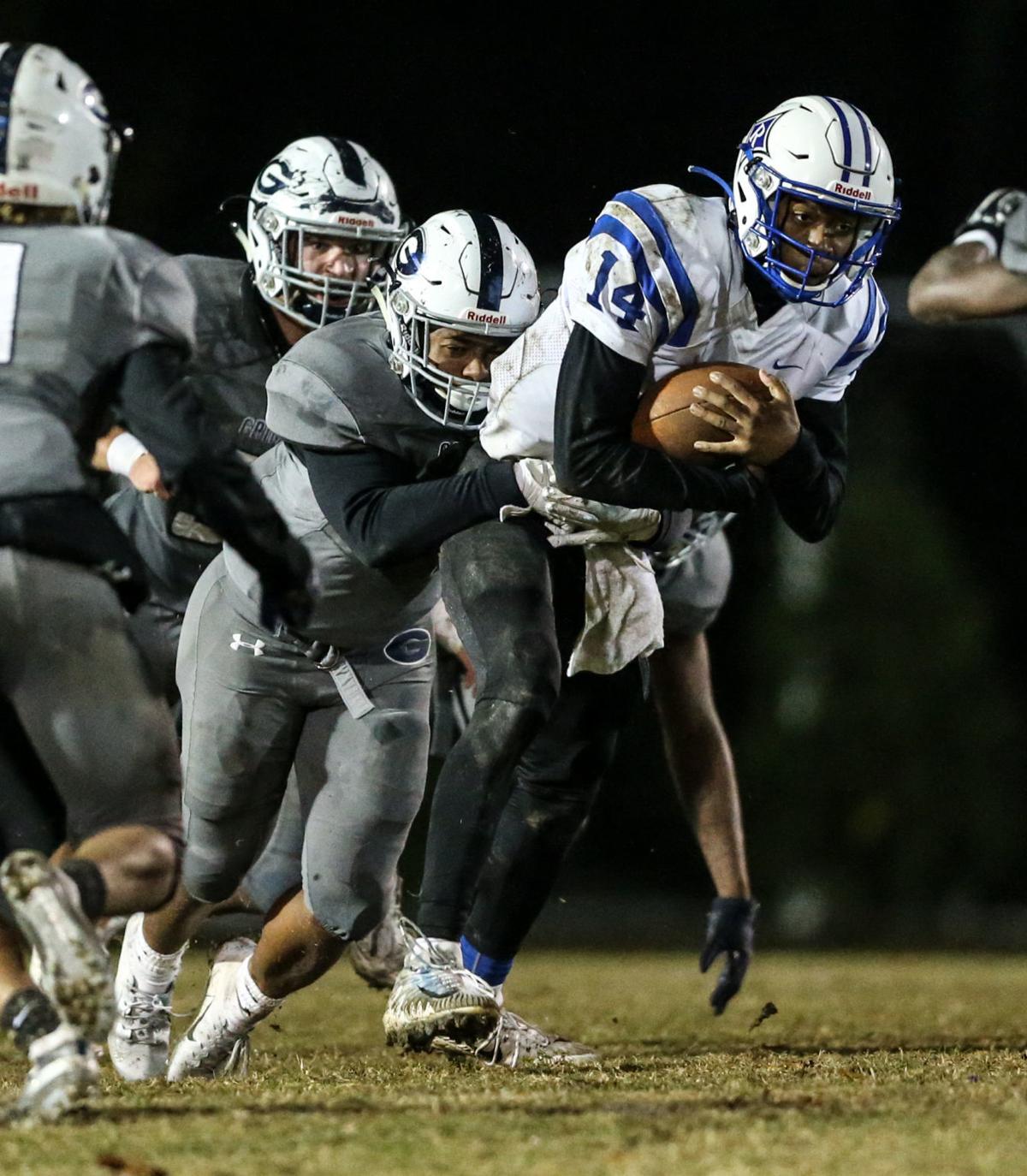 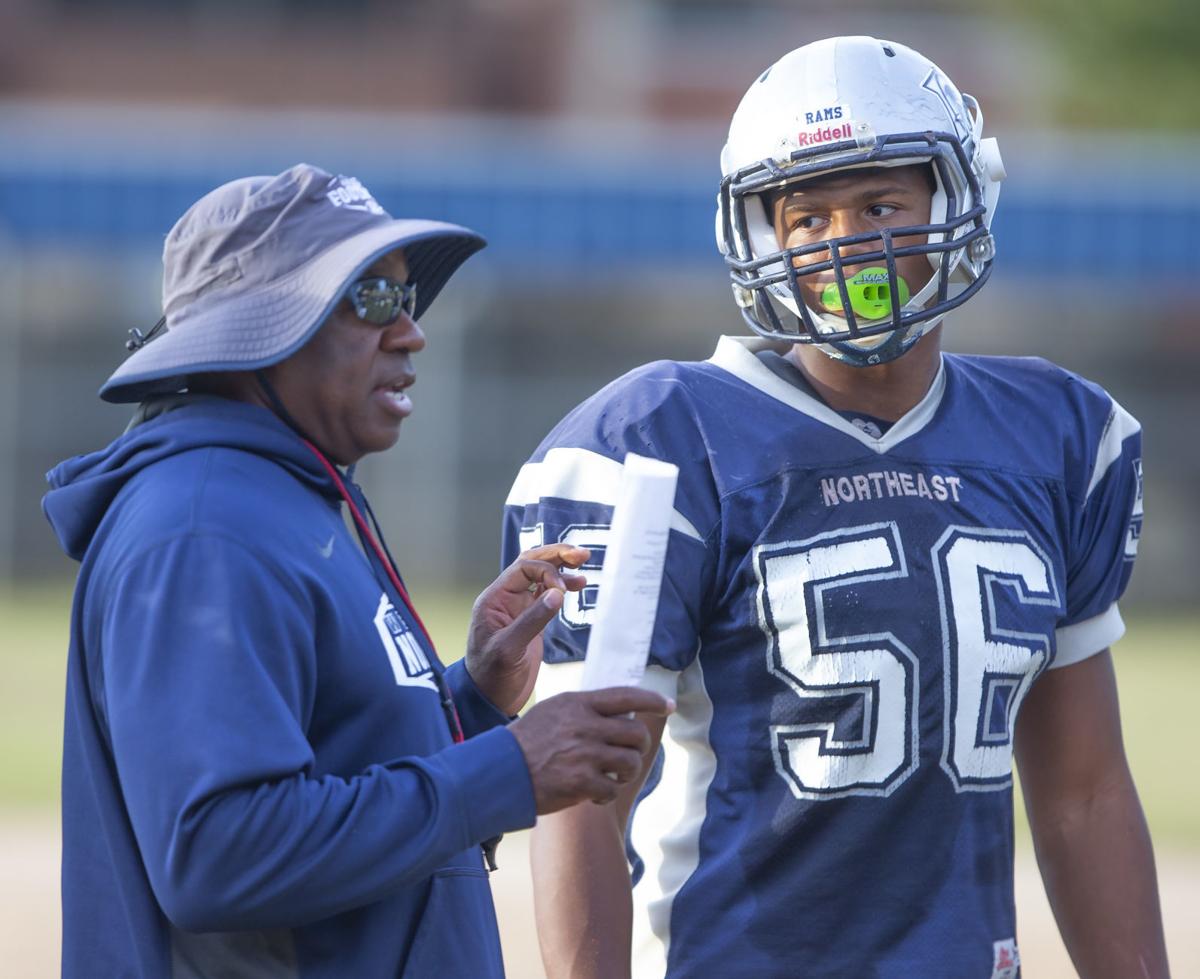 East Forsyth's Elijah Thomas (28) celebrates after a pass intended for Raleigh Cardinal Gibbons was stopped by the defense in the fourth quarter of the NCHSAA Class 4-A title game on Dec. 14 in Chapel Hill.

Oak Grove seniors Nikolas Everhart (71) and Logan Boyer (55) get pumped up prior to the first quarter of a Central Carolina 2-A conference football game on Oct. 25 in Midway.

Standouts from state champions East Forsyth, Reidsville and East Surry — in addition to Northeast Guilford, Jamestown Ragsdale, Reagan, Thomasville, Oak Grove, Elkin, North Forsyth and North Davidson — filled spots on the West team led by Coach Doug Robertson of Greensboro Page. Chuck Cannon of Wilkes Central was tapped as an assistant. The East-West All-Star Game, which annually features recently graduated seniors from the western and eastern regions of the state, kicks off July 22 at Jamieson Stadium on the campus of Grimsley High School in Greensboro.

East Forsyth, which claimed its second straight NCHSAA Class 4-A title in December, was represented by Javon McAllister and linebacker Elijah Thomas. McAllister, a 5-foot-9 defensive back, amassed 70 tackles and five interceptions this past season. The 6-foot, 200-pound Thomas finished his career with an interception during the second quarter of the Eagles' 24-21 state title win over Raleigh Cardinal Gibbons at Kenan Stadium.

Reidsville's Lionel Long was also selected. The 6-foot running back racked up more than 1,700  rushing yards and 34 touchdowns as the Rams claimed a Class 2-A championship in 2019 — the 21st title in program history. East Surry's Quincy Smith, a 6-foot-2 linebacker who helped the program win its first state title in Class 1-AA, earned a nod as well.

Three standouts from the Central Carolina 2-A were picked. Nikolas Everhart, the 6-foot-2 and 240-pound defensive lineman from Oak Grove, helped the program claim conference title in just its second season fielding a varsity team. That also included Jordan Williams, a defensive back at Thomasville who was named to the Journal's All-Northwest team in 2019, and offensive lineman Tradjon Suggs, a two-time all-conference pick, from North Davidson.

Elkin was represented by Austin Longworth an All-Northwest selection as a 6-foot-4 standout defensive end. Reagan's Jovan Turner, who earned a nod for the All-Northwest team as a 6-foot-1 offensive guard, and Nasir Lawrence, a wide receiver and linebacker at North Forsyth, were named to the roster as well.

Two players from Guilford County were also named. That included Ragsdale quarterback Alston Hooker, who will move on to a Division I career at N.C. A&T, and Northeast Guilford's Anthony Hairston — a 6-foot-2 and 225-pound defensive lineman.