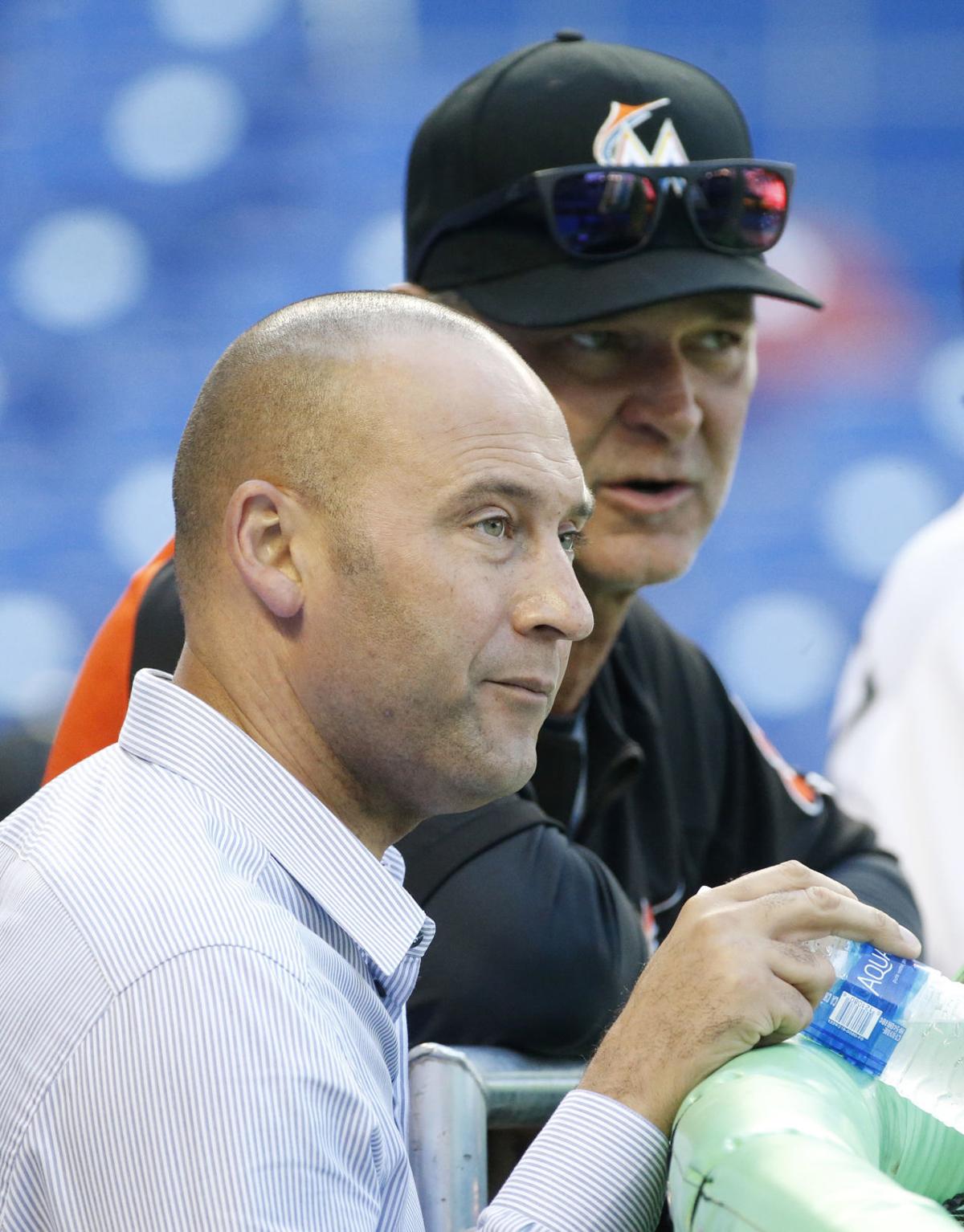 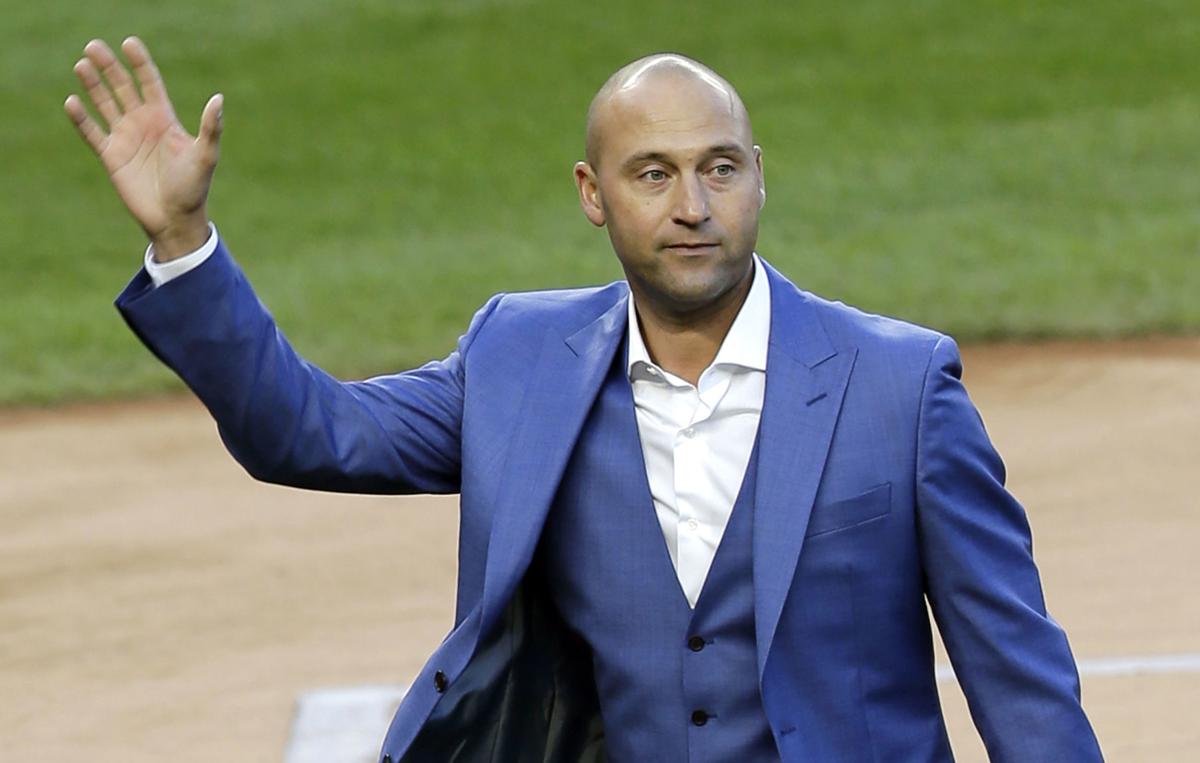 On the night the Greensboro Grasshoppers wore throwback Hornets jerseys, the last starting shortstop to wear a Hornets jersey to work every day is at First National Bank Field, watching intently from the upstairs seats outside Suite 202.

“Coincidence, right?” Derek Jeter says, memories flooding back from that long-ago summer of 1993. “They look good, don’t they? We heard about the throwbacks today when we got into town. I always wore either 13 or 31 (in the minors). I always tried to get No. 13, because my dad wore 13 in college. So I always wanted 13, and if I couldn’t get it, I’d flip it to 31.”

Today the 14-time All-Star and five-time World Series champ with the New York Yankees wears the mantle of baseball executive as a part-owner and CEO of the Miami Marlins.

And this is a business trip, his first time in Greensboro since he batted .295 with 11 triples and 71 RBIs in 128 games for the Hornets 25 years ago.

“We’re going to see a few of the (affiliate) teams, yes,” Jeter says. “We want to get an opportunity to see some of these young guys in person. That’s very important. You get the scouting reports and you see the videos, but, no question, it’s different to see a guy in person.”

But it's also a night for nostalgia, a chance for the 44-year-old Jeter to remember what it was like to be an 18-year-old South Atlantic League All-Star.

“I love Greensboro,” he says. “I’ve got a soft spot for Greensboro.”

Jeter pauses and looks out across the downtown ballpark, an unfamiliar place that wasn’t built until 2005. His eyes sweep the changed skyline. And he smiles.

“It was great playing here. It really was,” he says. “We had a lot of fan support at War Memorial Stadium. Every game attendance was great. They built that Grandstand bar in the left-field corner … and it was always packed. I have nothing but great memories about playing here. Well, except for those 56 errors.”

Jeter can laugh about the errors now after winning five AL Gold Gloves. But at the time, when he shared an apartment with utility infielder R.D. Long, it gnawed at him.

“I loved the town, but I was the youngest one on the team, so I couldn’t really do much,” Jeter says. “I was 18 years old, so I was stuck in the apartment most nights after the games.

“But when you’re in the minor leagues, your mindset — at least my mindset — is all about making it to the next level. I struggled quite a bit here, especially defensively. Fifty-six errors. So I spent a lot of time at the ballpark trying to get better. A lot of early work. A lot of late work after the games. However you want to define it, it was work. I spent a lot of time at that ballpark.”

And he spent a lot of time with manager Gary Denbo, starting a friendship that goes back 26 years to when they met in the Gulf Coast League.

It’s a key relationship today. Jeter trusts Denbo and hired him as the Marlins director of player development and scouting.

“Gary taught me consistency,” Jeter says. “His was a consistent approach, and that’s important when you’re in player development. You want to have an approach and stick with it. You don’t want to change things every year. You want to improve, but you do that through consistency.”

Jeter built a career on consistency. And as it wound down, he started thinking about getting into the business of baseball.

“You learn as you play, because you make decisions about marketing, public relations, investments, contract negotiations,” Jeter says. “That’s all part of the business of baseball. So I made the effort. I lived in Tampa (the Yankees minor-league headquarters), so I learned about player development and scouting. You meet a lot of great people, and you pick their brains. That’s how I prepared for it towards the end of my career.”

But nothing could prepare him for his newest role: Dad.

Hannah and Derek Jeter are the parents of 10-month-old Bella Raine. And it’s only changed everything.

“Fatherhood is much more challenging than anything we’re doing here at the ballpark,” Jeter says. “I’ve prided myself on always being prepared in everything that I do. Well, I don’t think you can prepare to be a parent. You just sort of wing it, right? You learn something new every single day. And you just don’t want to screw anything up. That’s the best way to put it. It’s hard to prepare. People can tell you all they want, but it’s something you have to experience to understand. And it’s by far the greatest experience I’ve ever had.”

The grin returns, and Derek Jeter looks out across the diamond again, looks back in time on a throwback night at the old ballgame in a city full of fond memories.

Jeff Mills: All business on trip, Jeter shows sense of humor about errors