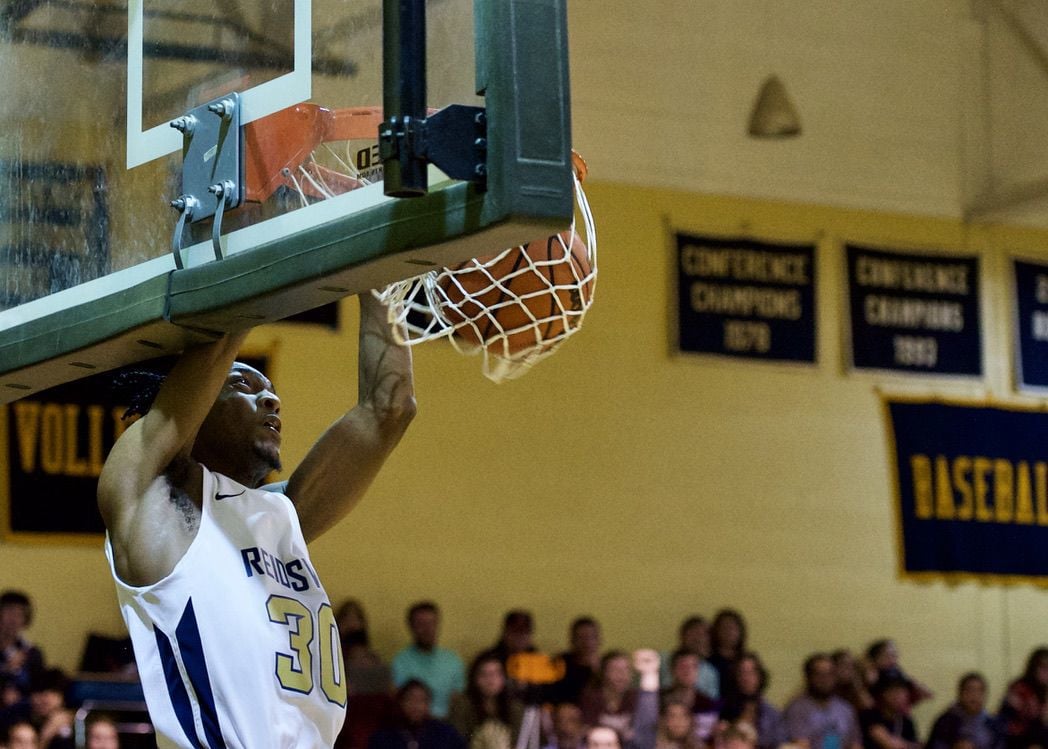 Reidsville senior Jacob Marshall throws down a dunk on a transition bucket in the Rams 77-57 win over Rockingham on Monday night. 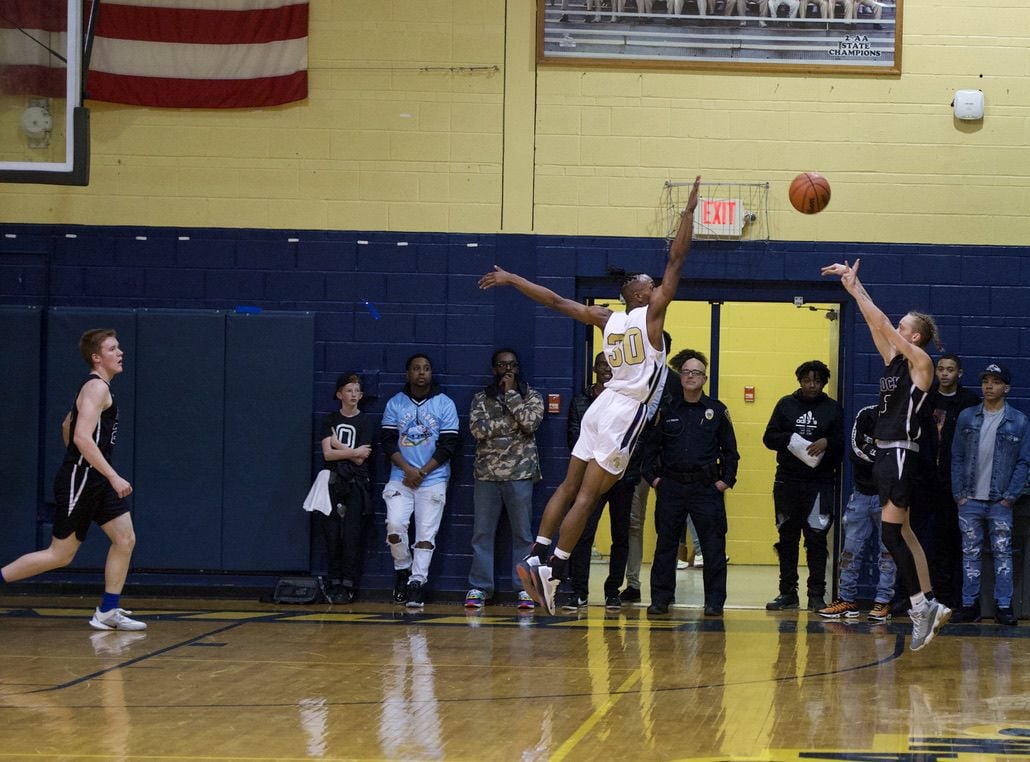 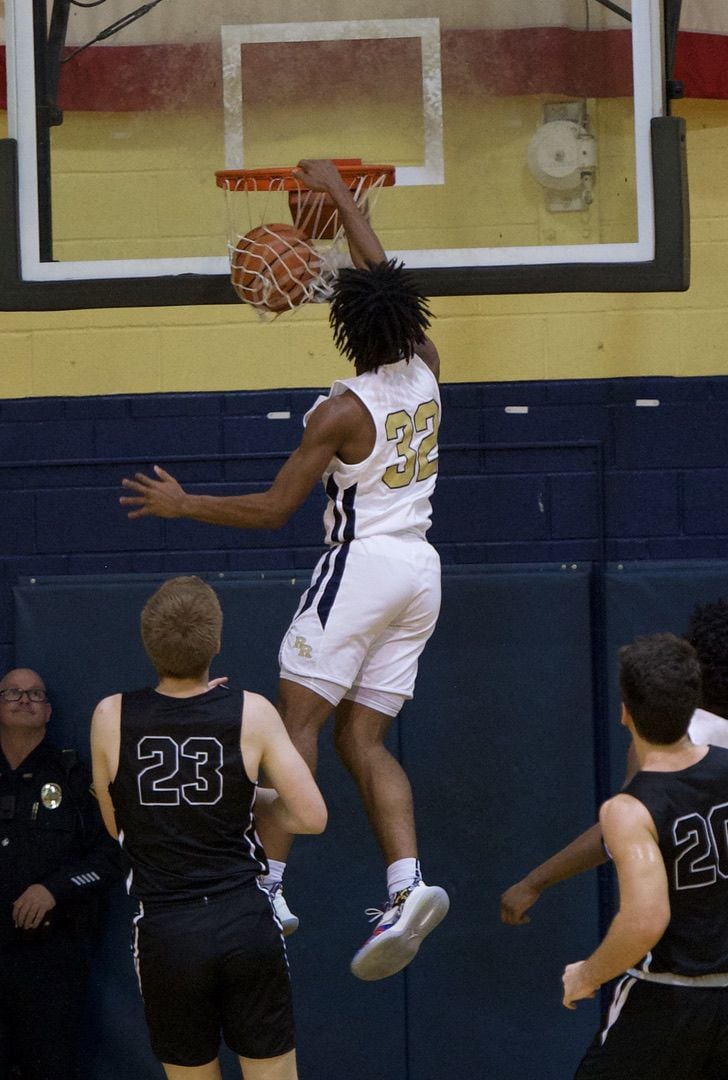 Junior Breon Pass leaps for a bucket in the Rams season opening win over the Cougars Monday.

Reidsville senior Jacob Marshall throws down a dunk on a transition bucket in the Rams 77-57 win over Rockingham on Monday night.

Junior Breon Pass leaps for a bucket in the Rams season opening win over the Cougars Monday.

Playing in front of a standing room only, capacity crowd, Reidsville defeated rival Rockingham 77-57 to pick up the teams first win of the season on a very emotional night for both players and fans alike Monday.

“Before we came out of the locker room and went up the stairs, some of the guys were very emotional. It was the first time we hadn’t had coach with us for many years. We just told them that you just have to block it out, and when the whistle blows, just play — and they did,” new RHS head coach Jason Ross said.

To start off the night, it was all Rockingham in the opening minutes, and the rust on Reidsville’s end was evident as the Cougars opened with a 7-0 run.

But the Rams finally started to get things going as they cut it to 7-6 with under three minutes remaining in the first quarter.

A break away jam by Jacob Marshall helped RHS close out with a 10-9 lead heading into the second period and then Reidsville started to press and run more. That pressure started to pay off following a steal and a flip to Breon Pass as the junior guard threw down a right-handed jam to close out the half with a 29-21 lead.

The Rams stuck to what helped them close strong in the second quarter, as the combination of pressure defense and their ability to run and finish in transition helped them build a double-digit advantage.

Later, Marshall was on the receiving end of one of those transition conversions. Following a steal at half court, Marshall raced to the paint and finished with a two-hand jam which gave RHS a 47-29 lead with under two minutes to play in the third. Moments later, an alley opp layup to Pass, followed by another score by Marshall in the post, put the Rams up 53-35 to close out the third quarter.

Rockingham, thin on experience and depth, started to succumb to Reidsville’s deep bench that continually rotated fresh players in as RHS traded baskets and ran out the clock to lock down the win.

“The difference in the ball game was rebounds. I thought neither one of us shot the ball very well, but with their athleticism, they were able to out jump us, dish the ball out to somebody already heading down the floor, and we didn’t get back on defense. I told them going into the game two things we had to watch was rebounding and getting back on the ball in transition. After we started to get fatigued, it showed they were a better team on the night when it comes to rebounds,” RCHS head coach Adrian Doss said.

Senior Auldon Edwards led the way for the Rams with 18 points, including a pair of 3-point baskets. Three other Reidsville players scored in double figures. Stevian Harrison had 14, Pass added 12 and Marshall chipped in 11.

Bryson Barnes led the Cougars with a game-high 23 points, which included a pair of 3’s. Bryson Patterson added 19 and Mason McDow had 8.

It was a late start to the season once again for the Rams out of necessity because 10 of the 15 players on the roster were also members of the 2019 2A state championship football team which just wrapped up the title on Dec. 14. That left RHS just one week of practice.

Ross said coming together as a team in that short time frame was certainly not easy.

“It was very tough. You know, this was our first game without coach Pass and when he passed away back in June, that was right before camp. We didn’t have an opportunity to go to team camp, so this was our first opportunity for us to come out and play together in about six or seven months. Getting the football players back five or six days ago, we only had four practices. This was actually our first live scrimmage in seven months. They weren’t making shots, but they defended well. In the second half, the guys came around,” Ross said.

The Cougars (0-3, 1-7) will get a chance to avenge the loss when the Rams pay a visit to Rockingham in the second half of the round-robin rivalry on Jan. 3 in Wentworth.

Following a short break for the Christmas holiday, both Reidsville and Rockingham have a busy end to the week on the docket.

The Cougars will host the Parks Chevrolet Tournament on Friday and Saturday while the Rams hit the road to compete at the Eastern Guilford Holiday Classic on the same days.