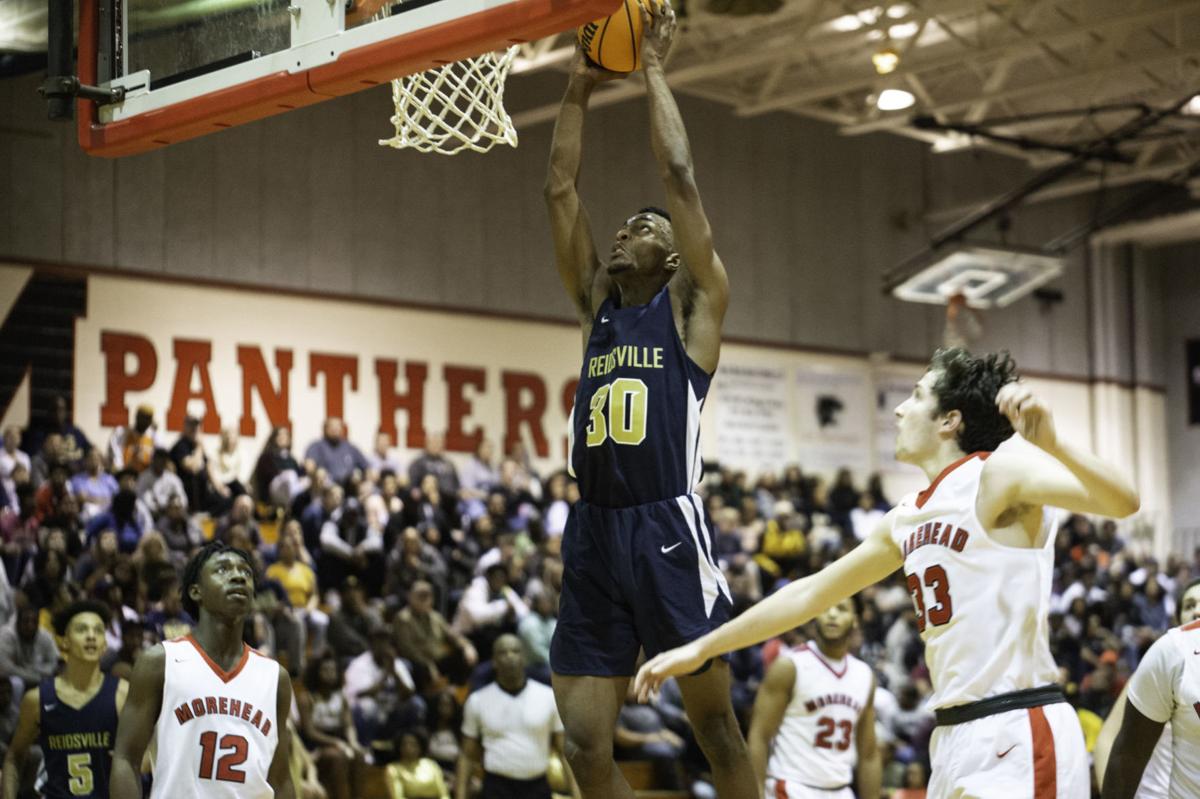 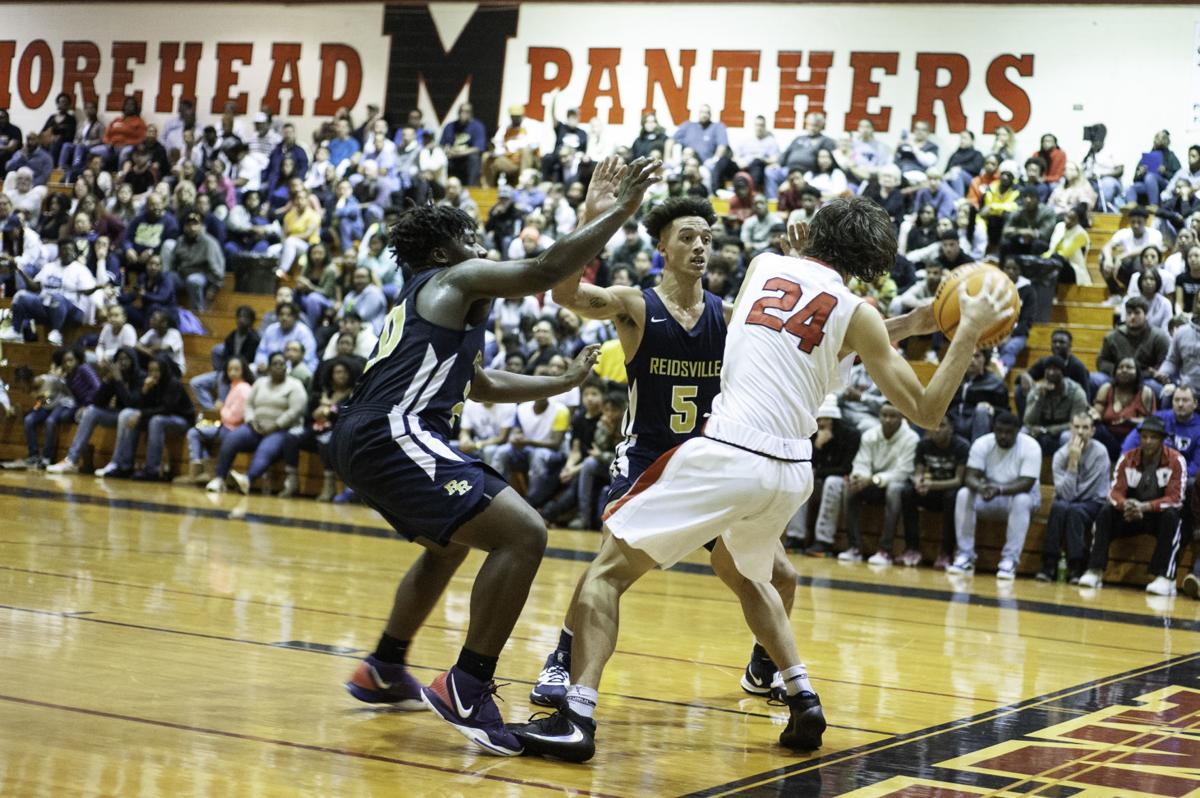 Shown from left, Reidsville guards Auldon Edwards and Stevian Harrison put the trap on Morehead’s Jarret Stewart on the baseline late in the fourth quarter of the Rams victory. 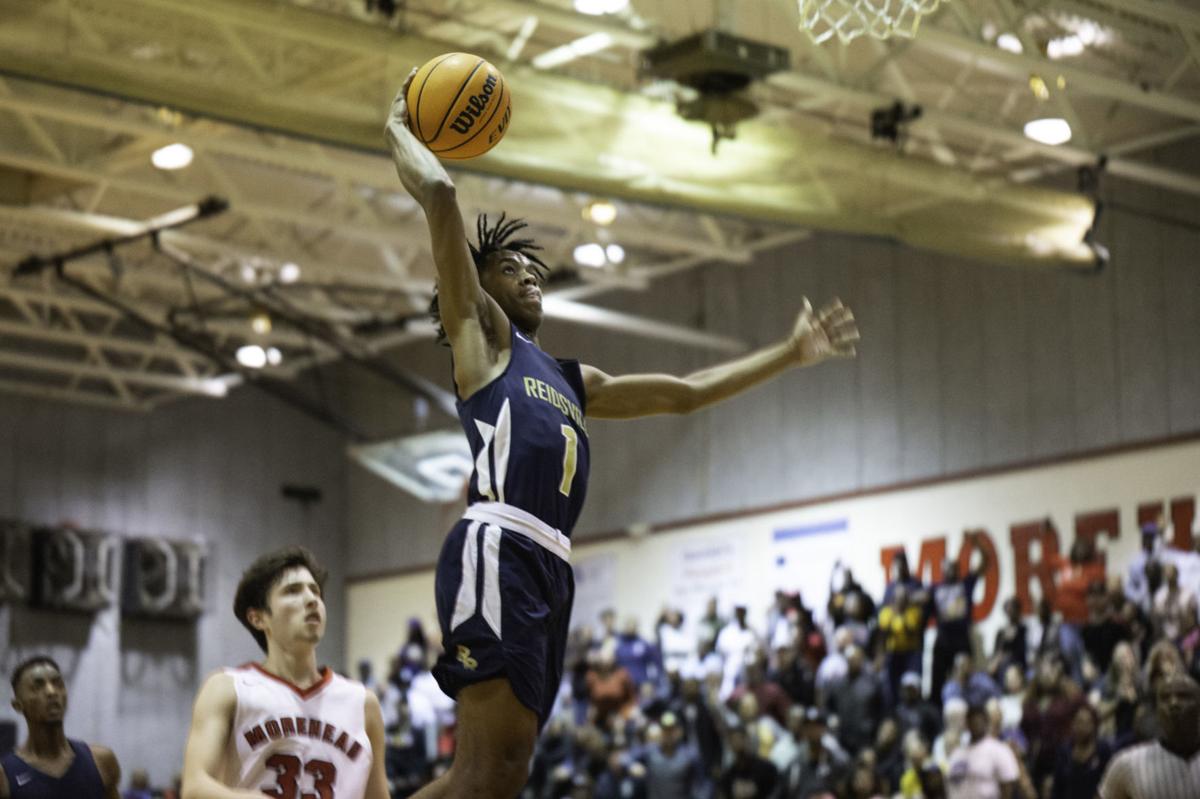 Junior guard Breon Pass goes up for a jam as the Rams began to pull away late in the fourth quarter versus the Panthers. 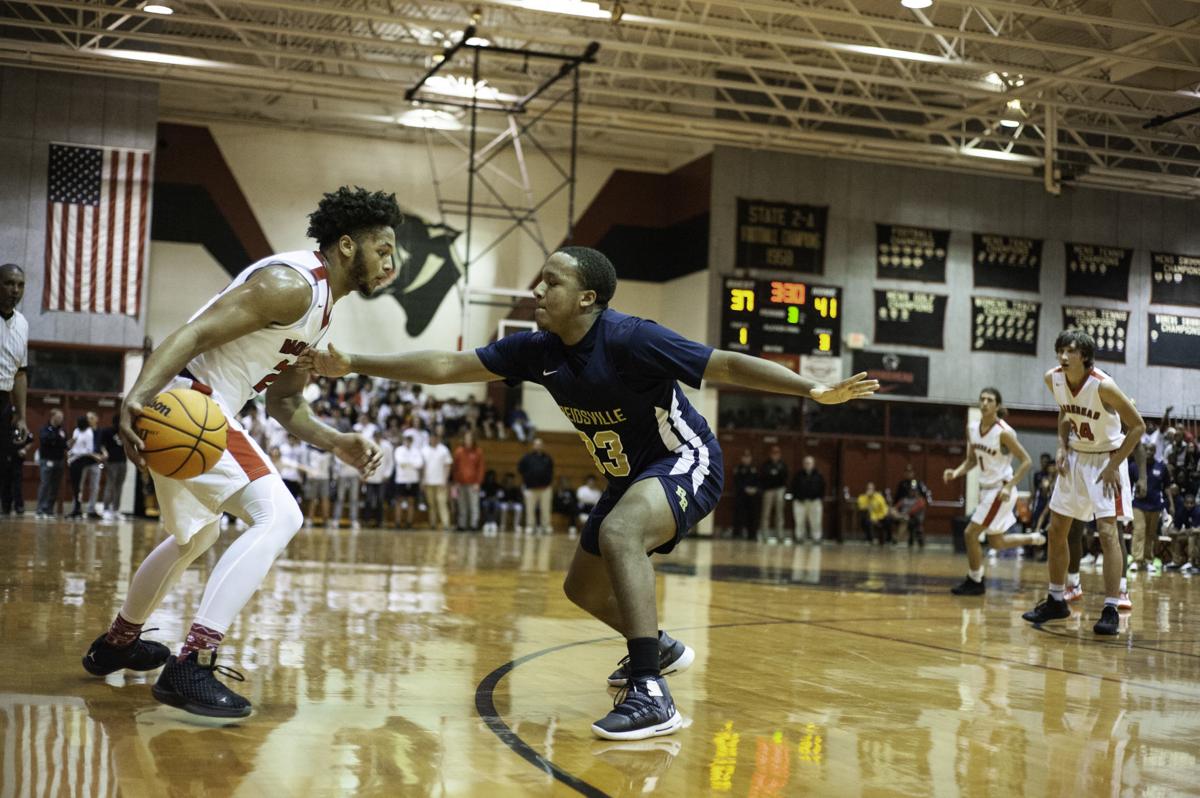 Reidsville’s Levar Strange puts the pressure on Morehead guard Shy Lampkin. His strong defense forced a five second call to give the Rams the ball back. 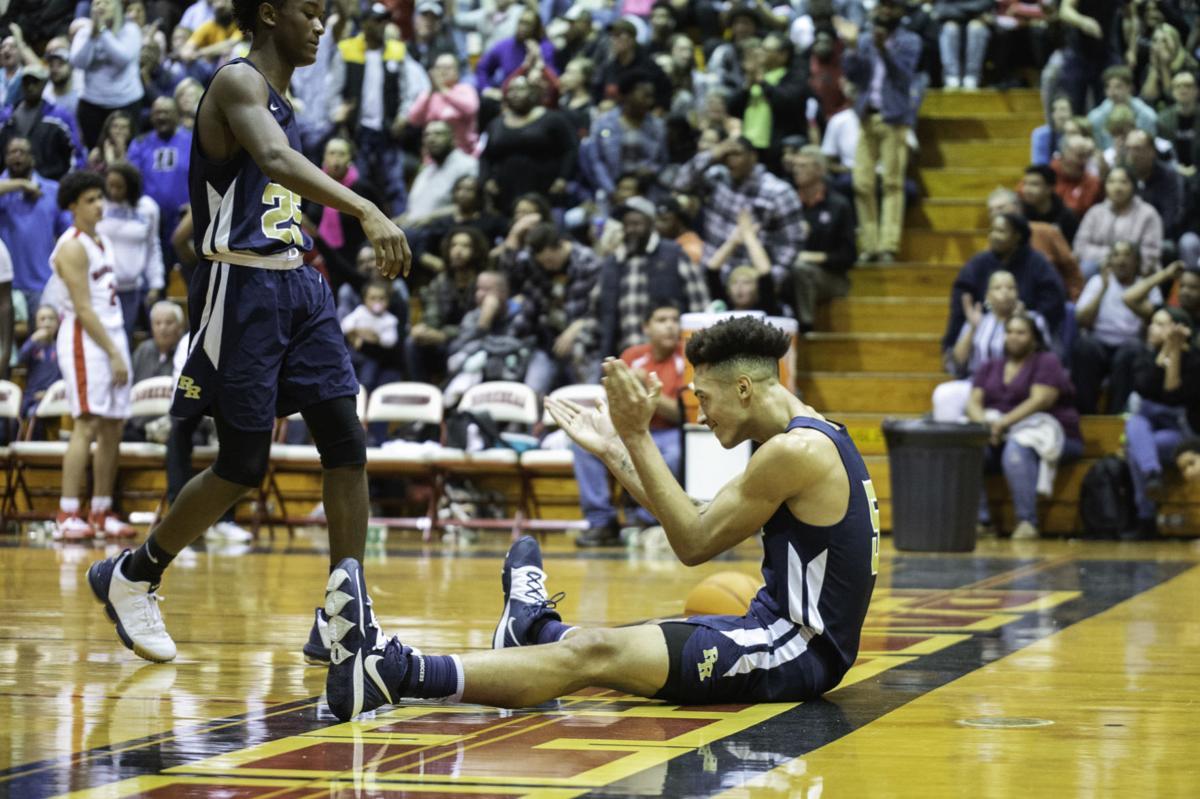 Reidsville senior guard Auldon Edwards celebrates after drawing a charge in the second half versus Morehead.

Shown from left, Reidsville guards Auldon Edwards and Stevian Harrison put the trap on Morehead’s Jarret Stewart on the baseline late in the fourth quarter of the Rams victory.

Junior guard Breon Pass goes up for a jam as the Rams began to pull away late in the fourth quarter versus the Panthers.

Reidsville’s Levar Strange puts the pressure on Morehead guard Shy Lampkin. His strong defense forced a five second call to give the Rams the ball back.

Reidsville senior guard Auldon Edwards celebrates after drawing a charge in the second half versus Morehead.

EDEN — Trailing by 13 points at the end of the second quarter, Reidsville flipped the script in the second half to rally for a 65-55 win over cross-county rival Morehead Wednesday night.

Hot shooting from beyond the perimeter with 3’s by Blake Byrd, Shy Lampkin and Javen Chandler — put the Rams in an early hole, and by the end of the first period, the Panthers had built a 24-13 lead to close out the first quarter.

Initially offense wasn’t easy to come by for the Rams, who were having a tough time in the post and perimeter as Morehead turned up the heat on both ends of the floor.

A pick-pocket steal off of a Reidsville inbound pass by Dominique Dalton, followed by a quick bucket and a subsequent 3-point basket by Kenyan Allen, increased the Panthers lead to 15 points with 2:30 to play in the half. Jacob Marshall would help the Rams keep the game from getting away however, with a timely breakaway two-handed jam for the final points of the second quarter with the Panthers leading 34-21.

It’s worth noting, the Rams entered the game short-handed in the first half with junior Breon Pass on the bench as he served a two quarter suspension for an earlier disqualification he received in Saturday’s game versus Smith.

With his blue-chip player set to get back on the court in the third quarter, Reidsville head coach Jason Ross said he felt confident his guys would rally and rise to the challenge.

“I knew going in that they were going to be tough. I just wanted to stay connected within 10 to 13 points without Breon by halftime, and when we reached that goal, we were going to be okay because I knew at some point, our defense was going to take, which it has all season,” Ross said.

Coming out of the locker room, all went according to plan as Pass drained a 3-pointer on his first shot in the third quarter, then another trey by Auldon Edwards on the Rams next trip down the court, cut it to a two possession game.

Later, a pair of free throws by Pass, followed by another bucket from beyond the perimeter, made it a 41-40 game with 1:36 remaining in third.

Moments later, a pair of free throws by Jacob Marshall gave the Rams their first lead of the game at 45-44 heading into the fourth quarter.

Jordan Sharpe helped put Morehead back in the driver’s seat when he made a slick dish to a slashing Byrd to give the Panthers the 46-45 lead on the first possession in the final period of play.

But the Rams answered on a Kenneth Allen score in the post to reclaim the lead. Reidsville got the cushion they were looking for in the moments that followed beginning with a corner 3-pointer by Pass. Then the junior gave his team a two possession cushion on a steal and a right-handed tomahawk dunk that nearly blew the roof off of a packed house.

Marshall would seal the deal on another breakaway jam, his second of the night, as the Rams bled the final moments of the clock to secure the come-from-behind win.

The play of Pass was certainly the missing component for RHS, and Panthers head coach Damien Price said he definitely helped turn the tide of the game.

“He injected energy and that played a big part in them winning. His presence alone, you saw when he came in and made the first jumper, it seemed like he gave the team a whole new life . . . he played a major role in their comeback,” Price said.

As for Reidsville, Ross said the quality road win was just what his team needed as the Rams prepare to get into the heart of Mid-State 2A Conference play.

“It gives my coaching staff and players a tremendous amount of confidence. We knew they were 11-0 coming in and ranked pretty high in the state, and we needed this game. So we just focused in — locked in. We came here for business and we got the business done,” said Ross.

Though extremely disappointed, Price said the loss wasn’t exactly the end of the world for his veteran squad.

“I don’t like losing, but sometimes I think it does help to take a loss, or for somebody to play you really close to let you know that you are not invincible. My message after the game was we lost this game, but we still have major goals of winning this conference. We’ve got one day to bounce back and play a conference game at Eastern Alamance, a team we haven’t beaten in the last three years, so we have to bust our behinds and move on,” Price said.

Lampkin and Byrd each had 11 points and Chandler added 10 more to lead the Morehead offense.

Edwards led the Rams with a game-high 18. He was 4 of 5 from the free throw line and hit three 3-pointers. Pass hit a trio of 3’s as well, was 4 for 4 from the line for 17 points, and Jacob Marshall added 10 more on the night for RHS.