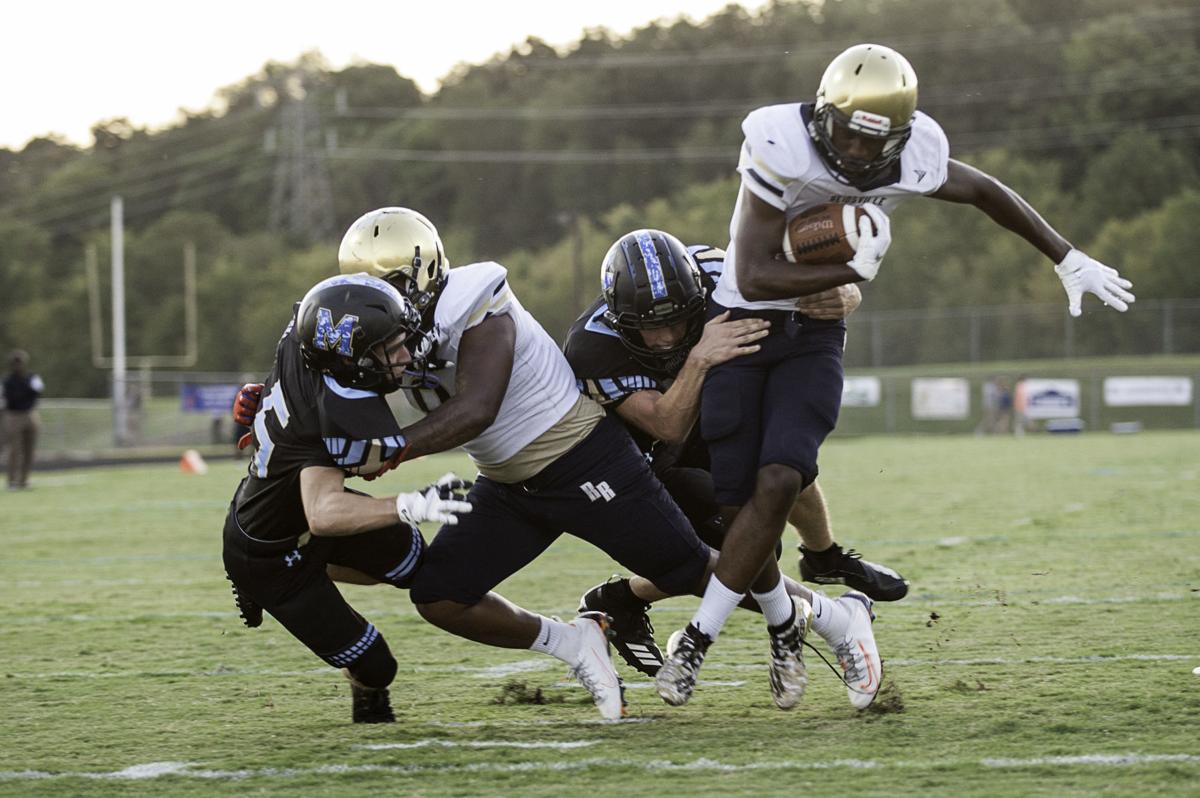 Reidsville senior running back Lionel Long bulls ahead for a gain in the Rams dominant 70-0 shellacking of McMichael in week No. 2 on Friday night. 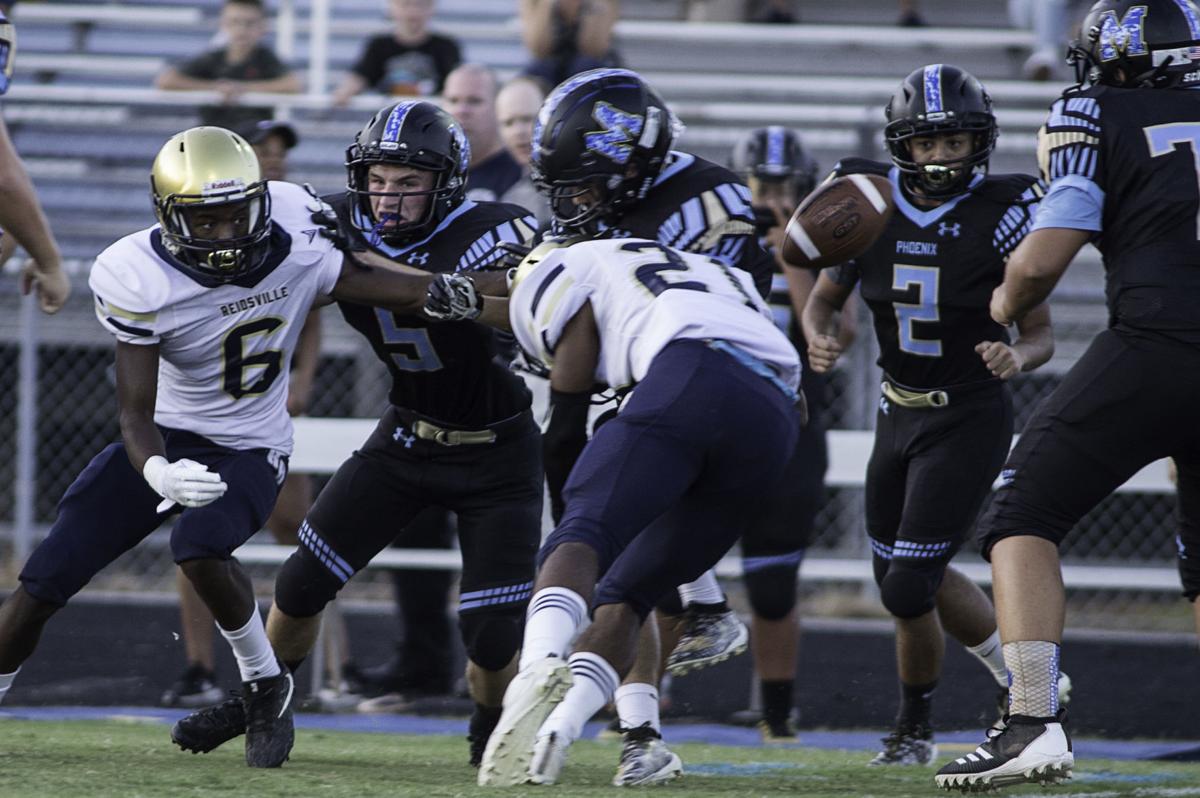 Reidsville defender Jevon Burton puts a shot on a Phoenix ball carrier forcing a fumble in the Rams win over McMichael at Macfield Stadium. 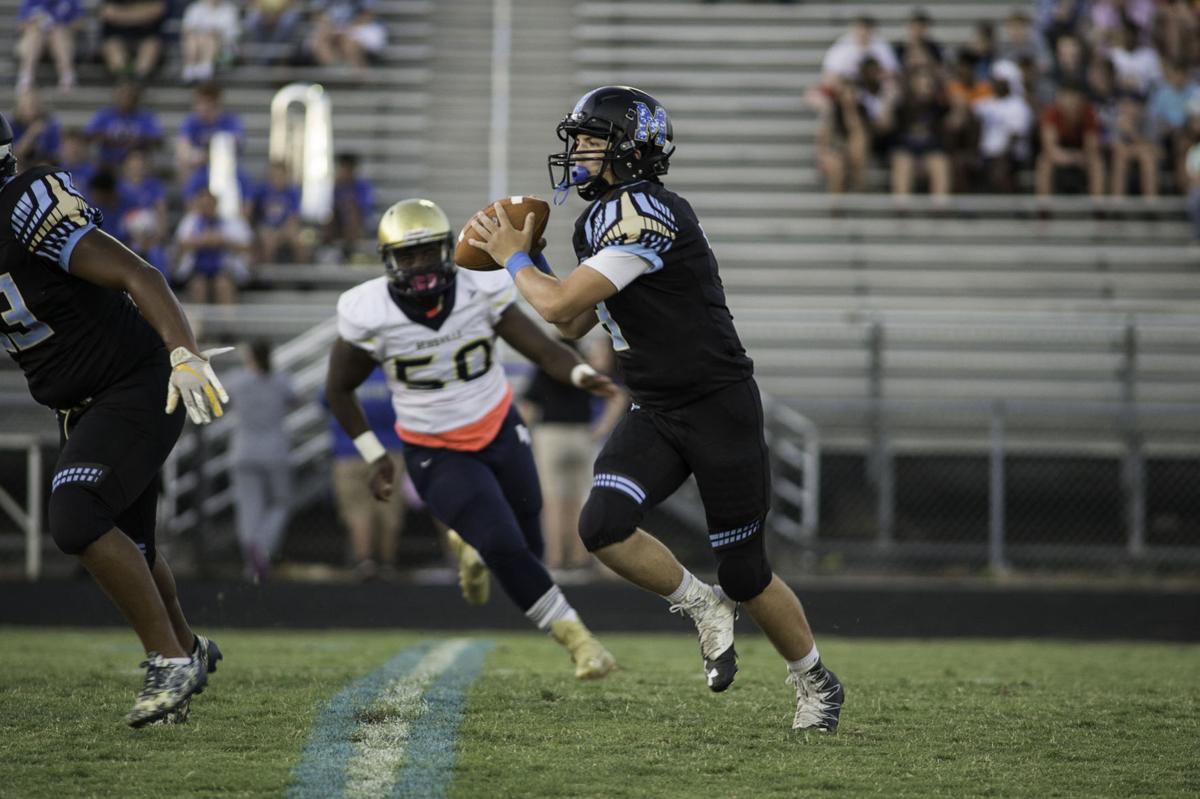 McMichael quarterback Matthew Wright rolls out for a pass in the loss to Reidsville in week No. 2.

Reidsville senior running back Lionel Long bulls ahead for a gain in the Rams dominant 70-0 shellacking of McMichael in week No. 2 on Friday night.

Reidsville defender Jevon Burton puts a shot on a Phoenix ball carrier forcing a fumble in the Rams win over McMichael at Macfield Stadium.

McMichael quarterback Matthew Wright rolls out for a pass in the loss to Reidsville in week No. 2.

MAYODAN – Reidsville pretty much had its way with McMichael on Friday, the Rams routing the outmatched Phoenix 70-0 in a game they dominated throughout.

Despite the outcome, Reidsville (2-0) did everything it could to keep from running up the score. The Rams, as the saying goes, “substituted liberally” almost from the outset. Three quarterbacks took turns leading the Reidsville attack.

Starting signal caller Kyle Pinnix threw four touchdown passes, each scoring strike hauled in by a different receiver. The Rams took their time getting off snaps as the game wore on, trying as hard as anyone to let the clock wind away.

Still, there’s only so much a team can do to keep from scoring.

Pinnix finished seven-of-nine for 199 yards despite taking probably only half of Reidsville’s snaps.

“It trickles down,” he said of the substitution by the Rams. “We all support one another, regardless of who’s on the field.”

The opening kick, which McMichael fumbled away at its own 30, set the tone for the evening. Reidsville’s Omarion Pettiford pounced on the stray ball and the Rams were in business.

Reidsville’s second possession resulted in a 5-yard touchdown run by Lionel Long. The third score came on a 42-yard scamper by Pinnix. The fourth touchdown was a 19-yard pass from Pinnix to Demontez Canada.

And on it went.

By the end of the first quarter, it was 36-0. That’s about the time a running clock was implemented to see that damage was kept to a minimum.

McMichael didn’t get its first first down until Nolan Hall bulled ahead for 4 yards with only a few seconds remaining in the first half. By then the Phoenix (0-2) were on the short end of a 50-0 score.

McMichael finished with just three first downs and 42 yards of offense. The team’s most successful play was an 11-yard scramble by quarterback Matthew Wright late in the contest.

Meanwhile, the Rams racked up 433 yards of offense.

Reidsville coach Jimmy Teague said he worked to see that as many of his players saw action as he could. But he said that when it comes to holding down the score in a runaway, there’s only so much anyone can do.

“Our second group practices hard all week,” Teague said. “You can’t put them in and tell them not to try to score.”

One of the few drawbacks to Reidsville’s assault came in the second half when an apparent 62-yard scoring strike to Auldon Edwards was called back for an unsportsmanlike call. Edwards was ejected, a call that Teague said he didn’t understand.

“They said he celebrated too much,” Teague said. “We didn’t see it like that.”

One of McMichael’s few signs of life came late in the first quarter. Already down 29-0, the Phoenix got a break when Jalen Hairston recovered a fumbled punt at Reidsville’s 36. Wright carried for 6 yards to Reidsville’s 30, but it was the deepest drive of the night for the Phoenix, who would turn the ball over on downs.

From there, Reidsville’s Breon Pass carried for 64 yards to McMichael’s 5. Long finished the job on the next play, scoring to boost the Rams’ lead to 36-0.

“I’ve got a lot of respect for coach Bradford,” Teague said. “It’s a process and he’s going to turn things around. Little things have a tendency to snowball and it snowballed on them tonight.”

Bradford, in his second year heading the McMichael program, said if there’s a positive for his program, it’s in the number of underclassmen who took the field Friday. His team is woefully short on senior leadership, Bradford said.

“They got an opportunity to see a varsity football game tonight,” he said of the freshmen and sophomores who suited up and played.

Reminded that Teague said he admired what he was trying to do, Bradford managed a grin.

“I have the utmost respect for Jimmy Teague,” he said. “I just wish I could give him a game occasionally.”