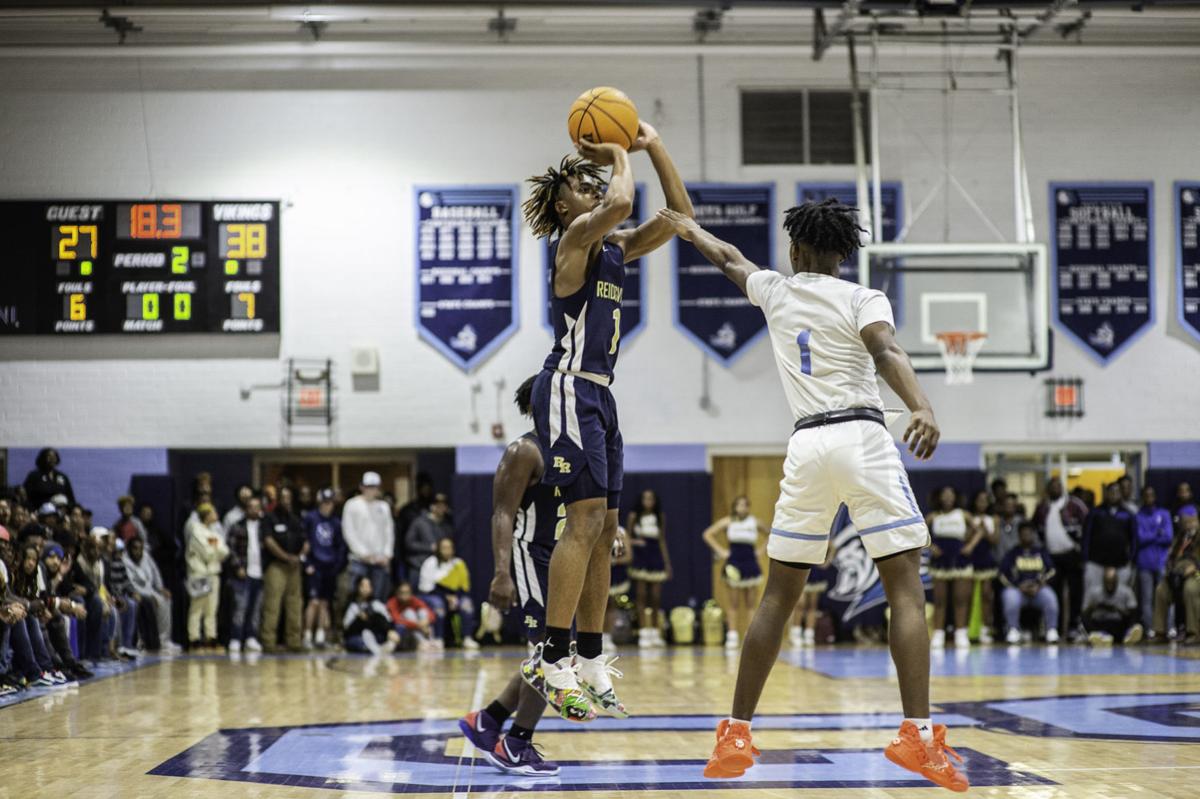 Rams junior Breon Pass spots up for a jumper in the fourth round of the 2020 2A NCHSAA state playoffs versus South Granville on March 5, 2020 during his junior season. 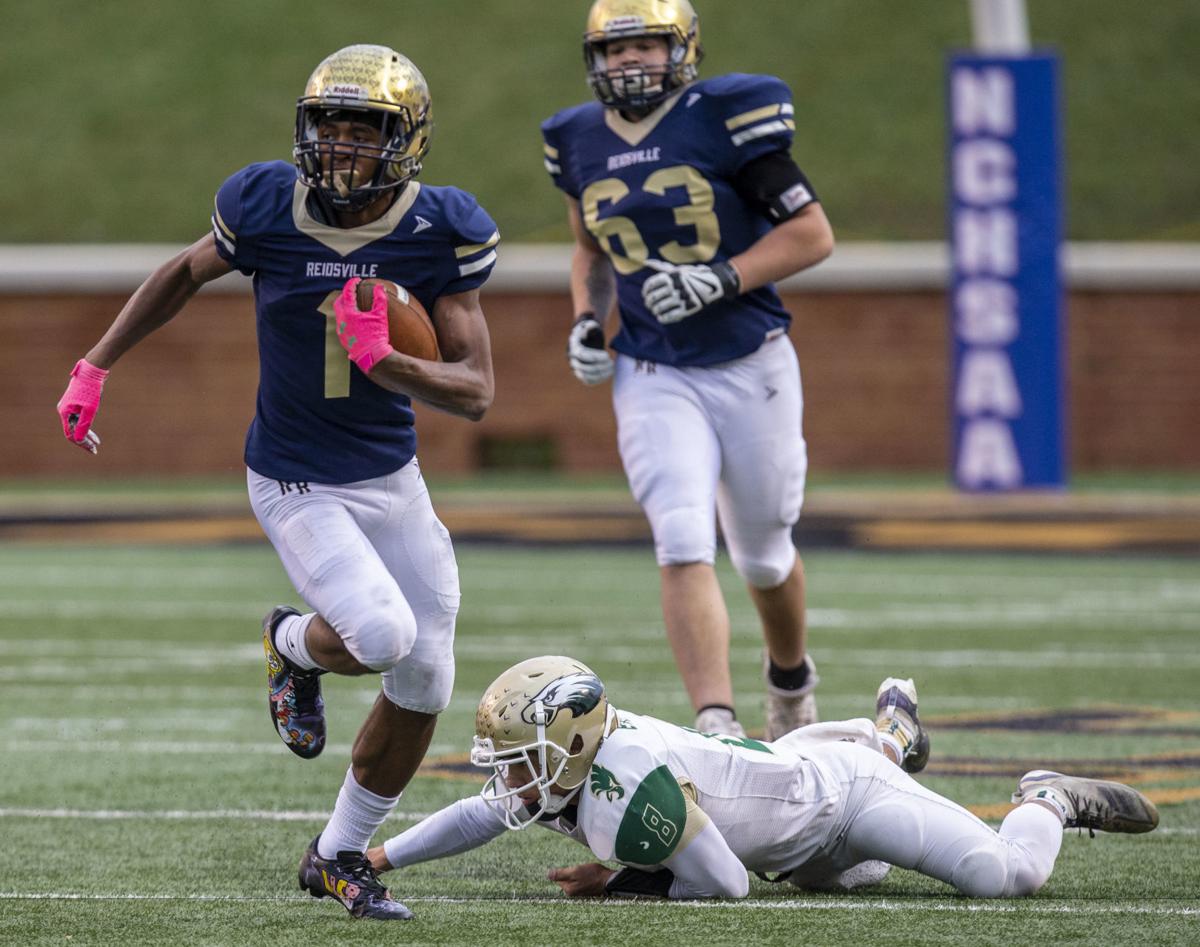 One of North Carolina’s most prized recruits, RHS's Breon Pass breaks free from an Elizabeth City Northeastern defender in the Rams 14-0 win in the NCHSAA 2A state championship game on Dec. 14, 2019.

Rams junior Breon Pass spots up for a jumper in the fourth round of the 2020 2A NCHSAA state playoffs versus South Granville on March 5, 2020 during his junior season.

One of North Carolina’s most prized recruits, RHS's Breon Pass breaks free from an Elizabeth City Northeastern defender in the Rams 14-0 win in the NCHSAA 2A state championship game on Dec. 14, 2019.

Reidsville Rams two-sport star Breon Pass admitted it’s been a year full of firsts and uncertainty during the pandemic crisis as a student-athlete.

For the 16 year-old rising senior, who has already received nearly 20 major Division I scholarship offers in both football and basketball, only one thing has been certain over the course of the last two years when college coaches first came a-calling — Pass has a bright future ahead of him.

He still hasn’t made the decision yet on which school — or what sport, for that matter he will ultimately choose. Pass has even hinted he might play both at the next level.

As one of North Carolina’s top players in both sports, who is to say he couldn’t or shouldn’t?

His decision depends on the school and how coaches might view playing two sports as an option, as well and what ultimately is the right fit academically, athletically and what could put him in the best position to achieve his dream of playing professionally.

“I haven’t made a decision yet. I’m holding onto that for now. I probably won’t make a decision until the end of the summer. My prospects in basketball have been steadily rising, so it’s making it tougher, but for now, I plan to make a choice by summer as to what I’m going to do,” Pass said.

Because of the coronavirus, which forced a nation-wide shutdown on schools, sports and businesses — unfortunately, all of that is on the shelf as the world copes with the COVID-19 predicament.

Pass said not only has it been a difficult adjustment with academics, having to adapt to online instruction, but it has completely derailed his typical training schedule.

“It’s really tough, especially with the AAU, missing out on that. Usually I’m playing basketball and training during the summer. I’m missing my teammates and the exposure through the recruiting process. All of that is on hold right now because of the pandemic, but all we can do is hold out hope this will get better. All we can do is stay safe,” he said.

Still, Pass said there are high hopes for final his year of high school.

As a rising senior, Pass said he feels he needs to set the proper example for the younger guys. One of the top football wide receiver prospects in the state, and considering his Rams team has a good shot at making it back to the NCHSAA championship for the fifth-straight appearance in the title game, Pass said he and his teammates are looking to add another chapter to the Reidsville legacy.

The Rams have won three of the last four state football titles.

Pass said the attention he has received from both recruiters and fans alike has been overwhelming.

“Really it’s just a dream come true. I’ve wanted this since I was like 5 years old and I’ve just been grinding, staying humble and trusting the process. It’s very hard being a two-sport athlete. It didn’t come easy and I’m not cocky, but I am confident. I don’t see myself as that type of person. I’m humble and a laid back kind of a guy. I just try to take it all in and hopefully good things will come.”

For now, Pass said he has to continue to train and be a good role model for his teammates.

“I stay in touch with the younger guys and the guys from middle school and stay tell them to stay positive and don’t get out-worked because when you are sleeping, other people are working, so this is not a time in life when you can just lay back and take a break. This is just an opportunity to see who is hungry and whether they want it or not. It’s a time when you’ve just got to go get it by yourself,” said Pass.