Members of the Luckies Batting Academy organization used part of their Christmas vacation to spruce up the three-mile mountain bike trail at Lake Reidsville back in December. 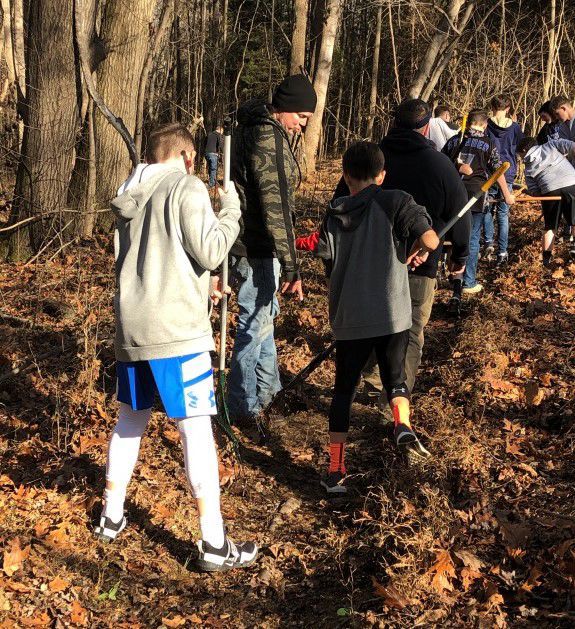 Luckies players are shown clearing the trail at Lake Reidsville on Dec. 20, 2019.

Members of the Luckies Batting Academy organization used part of their Christmas vacation to spruce up the three-mile mountain bike trail at Lake Reidsville back in December.

Luckies players are shown clearing the trail at Lake Reidsville on Dec. 20, 2019.

On Friday, Dec. 20, 2019, a group of young men from the Reidsville Luckies Batting Academy spent the first afternoon of their Christmas vacation giving back to the local community. Under the leadership of Scott Strader, the young baseball players worked with the city’s parks and recreation staff to perform routine maintenance on sections of the trail. Strader worked with Reidsville Parks and Recreation Superintendent Fred Thompson to coordinate the community service project.

The Luckies have engaged in several such projects. The batting academy has also been instrumental in helping the city strengthen its recreational baseball leagues. These players not only engage in travel ball but have been active in the city leagues.

“Due to the collaboration between the city and the Luckies Batting Academy, this cleanup effort was a great opportunity for the two entities to work together again,” said Reidsville Assistant City Manager of Community Services Haywood Cloud.

“The volunteer efforts of the Luckies have been invaluable in assisting Lake Reidsville Park in maintaining its uniqueness and beauty,” Thompson said.

The group targeted the portion of the bike trail that city staff had not yet gotten to as part of their regular maintenance efforts. Cloud was impressed by the players’ willingness to take a day out of their Christmas vacation to work on the trail. Strader was not surprised by the players’ enthusiasm to help with this project.

“These players are a great group, who excel not only on the baseball field, but also want to help make a difference in their local community. I am very proud of their work on the trail,” said Strader.

He continued, “Reidsville is my hometown and made me who I am. I wanted to start the Reidsville Luckies to give back to the community because of what it gave to me. Starting the Luckies has now allowed me to work with the City of Reidsville, both as a business and a partner with the parks & recreation department, and these 20 kids got to experience that by giving up a part of their Christmas vacation. This speaks volumes about what the Reidsville community, leaders, schools, and citizens offer and why so many other industries, businesses, and people choose our city over other places. In addition to winning championships in Reidsville, we ‘pay it forward’ and I am thrilled to see the next generation of Reidsville continuing that today,” Strader said.