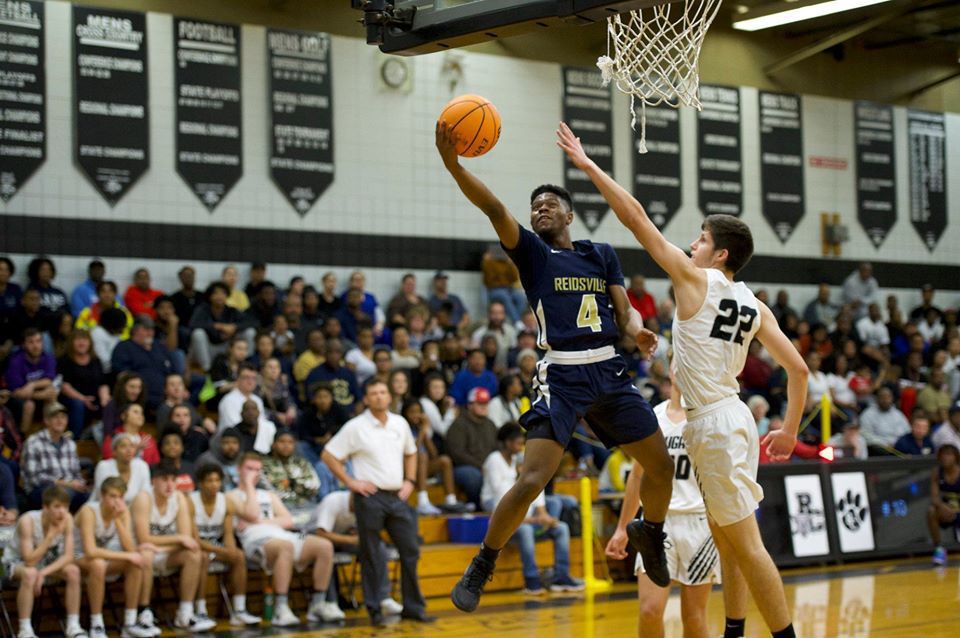 Reidsville senior Kenneth Allen goes up for a shot in the Rams win over Rockingham last Friday night. Reidsville has another tough assignment this week when they hit the road to take on undefeated Morehead Wednesday night. 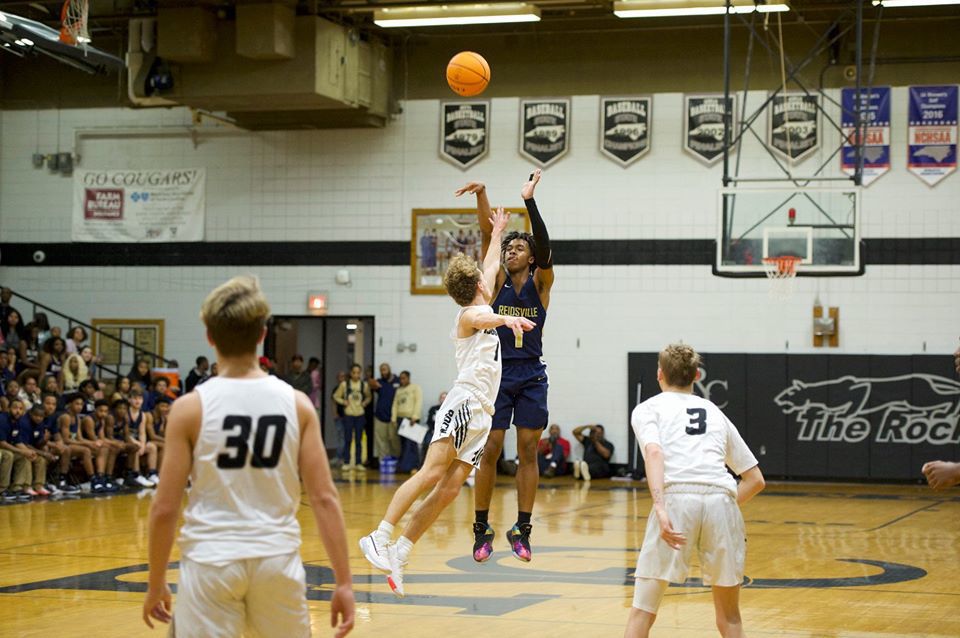 Rams junior guard Breon Pass pulls up for a 3-pointer in action versus the Cougars last week.

Reidsville senior Kenneth Allen goes up for a shot in the Rams win over Rockingham last Friday night. Reidsville has another tough assignment this week when they hit the road to take on undefeated Morehead Wednesday night.

Rams junior guard Breon Pass pulls up for a 3-pointer in action versus the Cougars last week.

GREENSBORO – Despite the 82-56 loss to powerhouse Smith (11-2) on Saturday night, Reidsville head coach Jason Ross left the game with the report card he said the Rams needed at this critical stage of the season.

The Golden Eagles, a team with four Division I, Power 5 verbal commitments, was the caliber team Reidsville will likely face in the post season if they are to reach the ultimate goal of winning a 2A NCHSAA state championship.

That was the goal that former head coach Curtis Pass, who passed away last summer, set for his team – and it’s a mission the Rams are intent on seeing through.

“One thing I learned from my mentor coach Pass was you have to prepare in January for what’s to come in late February and March, so playing a team like Smith gave us a forecast of where we are. If we want to get to where we want to get, which is ultimately a state championship, we are going to see a team like Smith down the road, so that game helped prepare us. It let us know where we are and we feel pretty good about where we are. That was our sixth game and we were right there toe-to-toe with them right there in the third quarter, so we were happy with where we were as a team,” said Ross.

The Golden Eagles took the initiative as they built a 17-8 lead to close out the first quarter, but the Rams would rally as they cut it to 36-30 at the half.

The third quarter was a different story however, as Smith outscored the Rams 26-13 for a 62-43 lead heading into the fourth period. That momentum would carry over as the Golden Eagles continued to score as they locked down the win.

Both teams reached the charity stripe a combined 79 times over the course of the night.

“It was a very physical game. They tried to get in our guys faces and tried to bother them mentally. Obviously they were bigger than we were. They had several guys that were 6-7 or better, so we knew we had to be as physical as we could be, but for them to shoot 50 free throws in a game, that’s unheard of,” Ross said.

Like Smith’s talented guard tandem of Hinds and Mason, Reidsville’s back court of Auldon Edwards and Pass have received Division 1, Power 5 offers as well. They draw major crowds and with that attention, it often results in not only the adulation of fans, but the ire as well and the best from the competition, but that is something Ross says his players expect and relish.

“We’ve played six games now and just about every game we have played has pretty much been standing room only in the gym. So we know that every game we play is going to draw a huge crowd and it’s going to draw the best effort from the other team, but we are up to the challenge. My players are poised and honed in on what we are trying to do going forward. They accept the challenge — they actually love the challenge, so we are ready for what lies ahead,” Ross said.

The Rams (4-2) will be back in action with a road trip to cross-county rival red-hot Morehead on Wednesday with tip off set for 7:30 p.m.

The Panthers, undefeated at 10-0, are playing as good as any team in the state and it is a challenge Ross says Reidsville is ready for.

“Looking at Morehead, obviously they are very well-coached and probably one of the best coaching staffs assembled in the triad and they have one of the best teams in the triad. They are 10-0 for a reason, so we are just going to have to play our game, coach the best that we can and hopefully come out on top. We are just looking forward to the challenge,” the coach said.