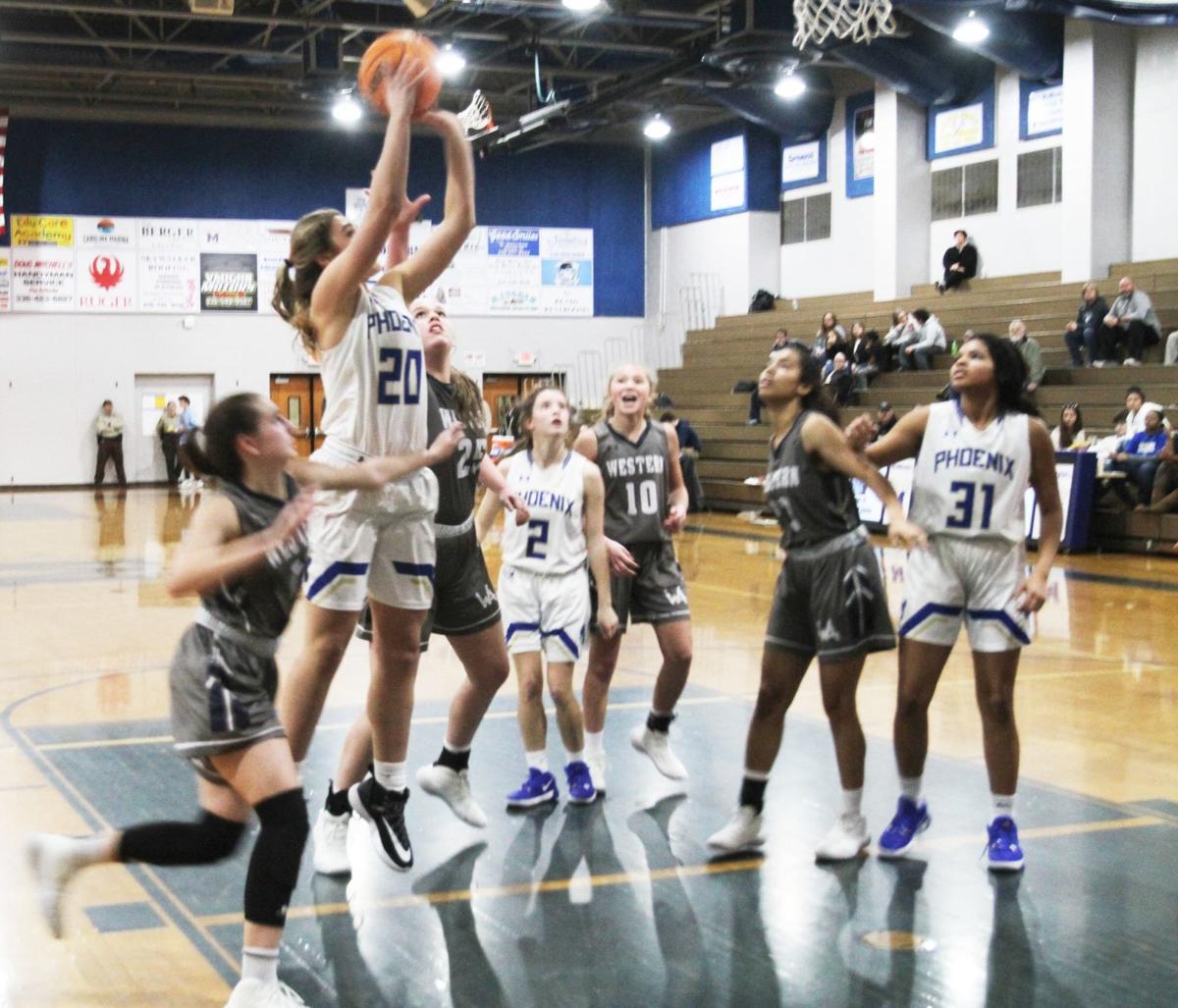 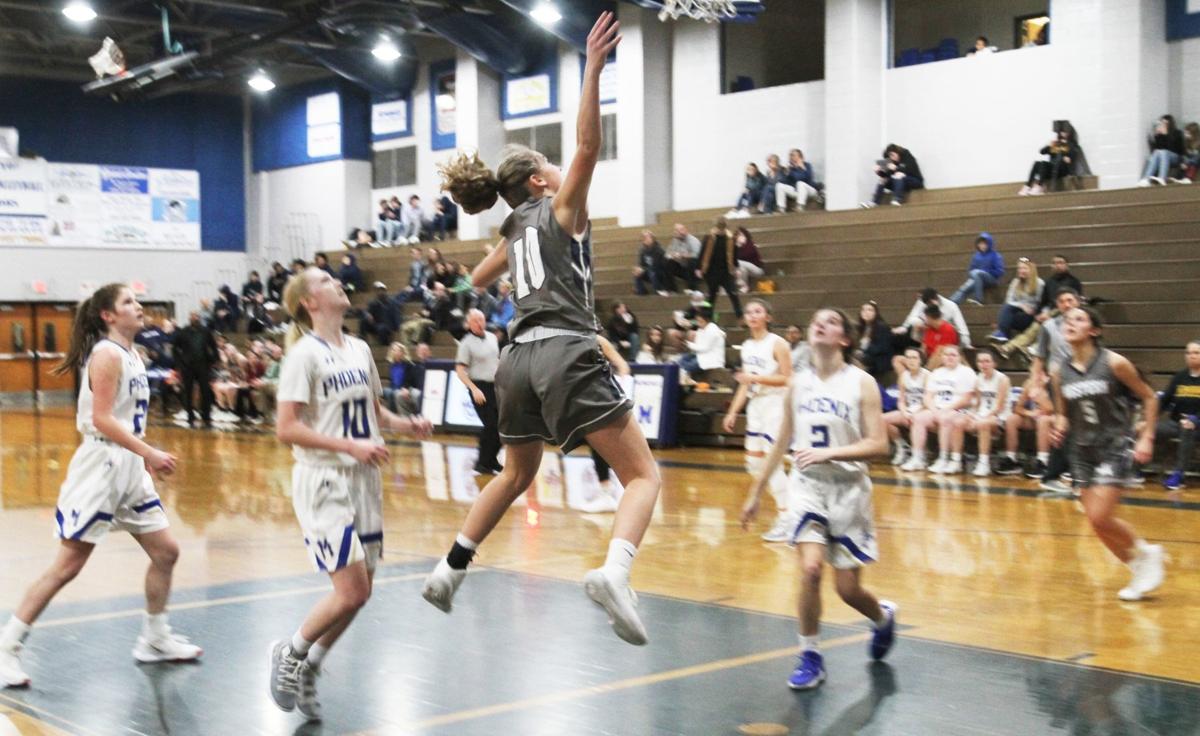 Western Alamance guard Lydia Stucker finishes on a fast break for a score in Tuesday night’s game at McMichael. 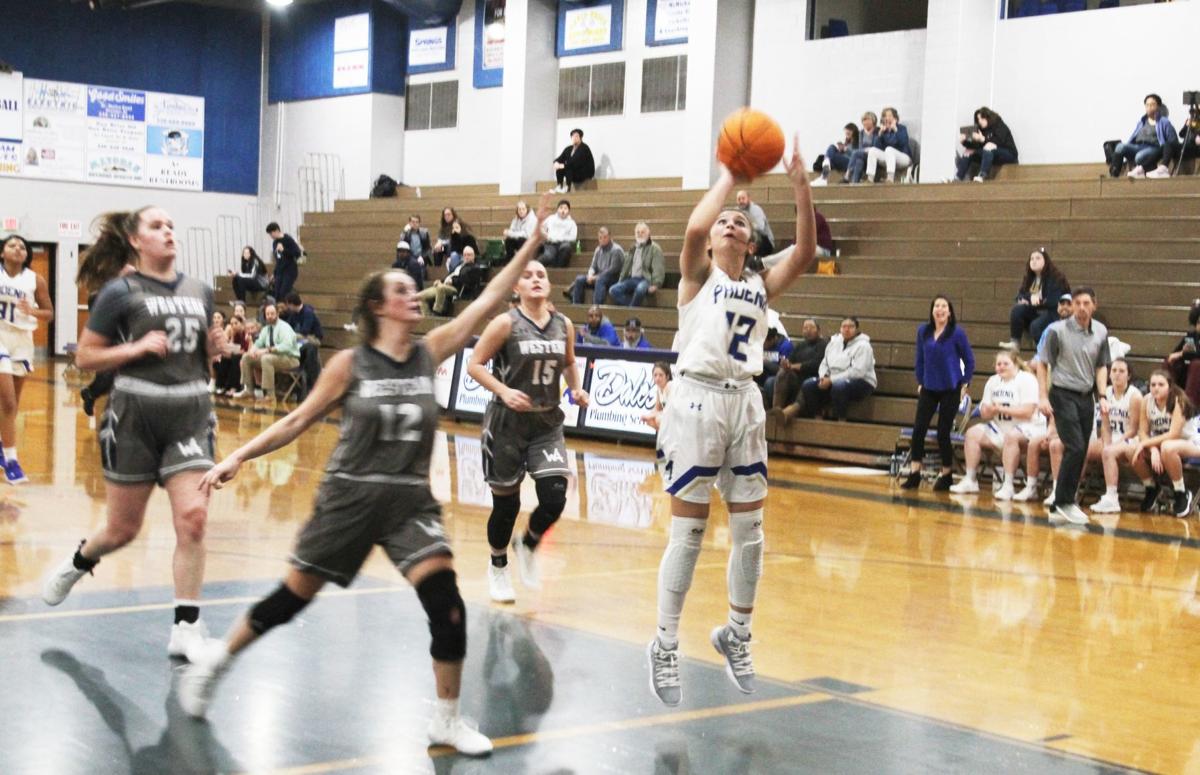 Phoenix senior Hollie Hawkins goes up for a bucket in second half action versus Western Alamance earlier this week.

Western Alamance guard Lydia Stucker finishes on a fast break for a score in Tuesday night’s game at McMichael.

Phoenix senior Hollie Hawkins goes up for a bucket in second half action versus Western Alamance earlier this week.

MAYODAN – In a tightly contested game from the opening tip, down to the final two minutes of overtime, it was anyone’s game for the taking, but ultimately, first place Western Alamance was tough when it counted most as they picked up a gritty 68-55 win over McMichael in Mid-State Conference play Tuesday night.

It was a game that was much closer than the final score indicated. McMichael was forced to foul since they were down two possessions, and a late technical put more points on the board to secure the victory for the Lady Warriors.

“McMichael is a much better team than they were last year and we knew it was going to be a dog fight, especially being on their home floor. We missed a lot of shots – a lot of free throws, but one of the things that we pride ourselves on is being gutsy and that was a gutsy win right there. We battled back. I think we were down 7 points at one point, but we play one possession at a time, and that is the thing that we talk about all of the time. Just digging in and taking it one possession at a time and we were fortunate enough to make some shots when it mattered,” said Western Alamance head coach Ray Edmond.

Both teams came out a little tight to start the night, and points were hard to come by initially, but as each team utilized the full court press to set up the offense, eventually shots started to go down. Freshman point guard Faith Robinson’s 3-pointer at the top of the key gave the Lady Phoenix an 11-10 lead at the 1:42 mark of the first quarter, but Western would reclaim the advantage with time winding down. McMichael senior Sadie Nester tied it at 13-13 with under a minute to go, then a steal and coast-to-coast score by Chaya Tatum in the closing seconds gave the Lady Phoenix a 15-13 lead heading into the second quarter.

More back-and-forth play ensued throughout the entire second period, but a pair of free throws by Robinson with 1.7 seconds remaining put McMichael back on top at 27-26 to close out the first half.

That same seesaw battle continued after the break, but late in the third quarter, but the tide would turn as a runner in the lane by Chandler Joyce gave McMichael a 7 point 39-32 lead heading into the fourth quarter.

Western went back to the man-to-man defense and started to have more success on the offense boards which led to second chance points — and the lead would again ebb and flow down the stretch.

But after several tense possessions, with both teams desperately trying to clinch the win at the end of regulation, the score was tied at 51-51 to set up the overtime.

McMichael’s entire starting five had foul trouble down the stretch, just simply due to the physical nature of the game, but ultimately the little things cost McMichael the victory.

Lydia Stucker led the charge offensively for the Lady Warriors while Hannah Russell was solid as well with 16. Allie Quinn added 13 and Erika Thomas knocked down a pair of 3’s.

Robertson had a career-high 26 and Nester added 12 more points to pace the Phoenix offensively.

McMichael was finally back up to full strength with the return of senior guards Danni Lester and Sadie Nester.

“We’ve had some girls in and out – sick – hurt – trying to play through some injuries, but they are one of the best teams in our conference. They are what, like 4-0 right now? That’s the kind of team that we want to be. We just have to take that, learn from that, and next time, come out on top,” said McMichael head coach Taylor Luegers.

The win for the Lady Warriors was their tenth in a row. Their only loss of the season was on the road at Ragsdale on Dec. 4.

The loss snapped a four-game winning streak by McMichael.

Because of the loss, the Lady Phoenix dropped to a fourth place tie with Person County in the Mid-State 2A / 3A Conference at 2-2, but with just two games separating first place Western Alamance (4-0, 11-1) and fourth, there is still plenty of time to build a winning resume and have a chance to win the regular season crown.

Luegers said he knows that type of game, going up against top-notch competition, is what his team will have to face if the Lady Phoenix close out strong enough to reach the post season.

“Playing very good teams that are 3A, with us being a split 2A / 3A conference, all this does is make us better when we face 2A teams down the road. To be honest, I don’t think we are getting some of the respect that we deserve as far as the rankings and what-not, but we are leaving it all out there on the court and letting our play show what we are,” said Luegers.

The two teams will meet up for the second half of the round-robin rivalry on Feb. 4 at Western Alamance.

McMichael will be back in action with a road trip to Bassett and Western Alamance will travel for a league match up at Northeast Guilford next Friday with both games set for 6 p.m.