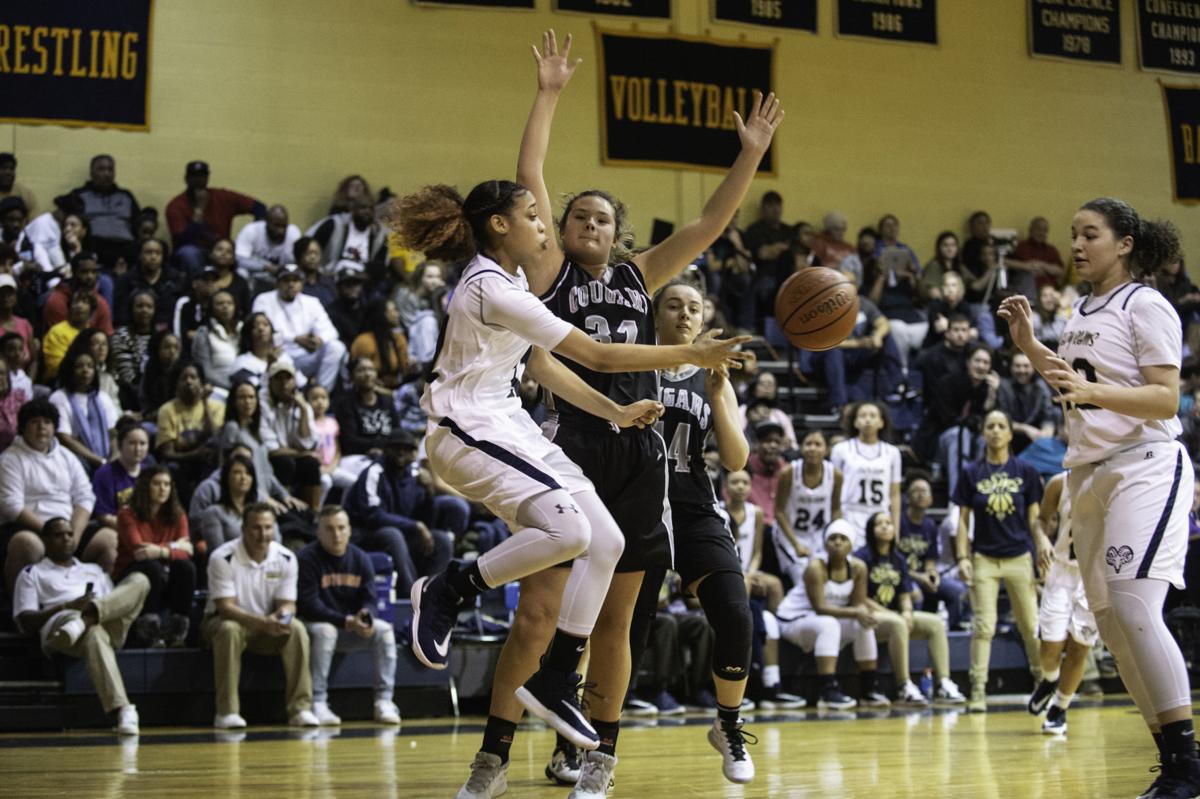 Junior guard Chlo’e McGhee dishes a pass to Torri Parson for a score in Reidsville’s 59-51 win over Rockingham Monday night. 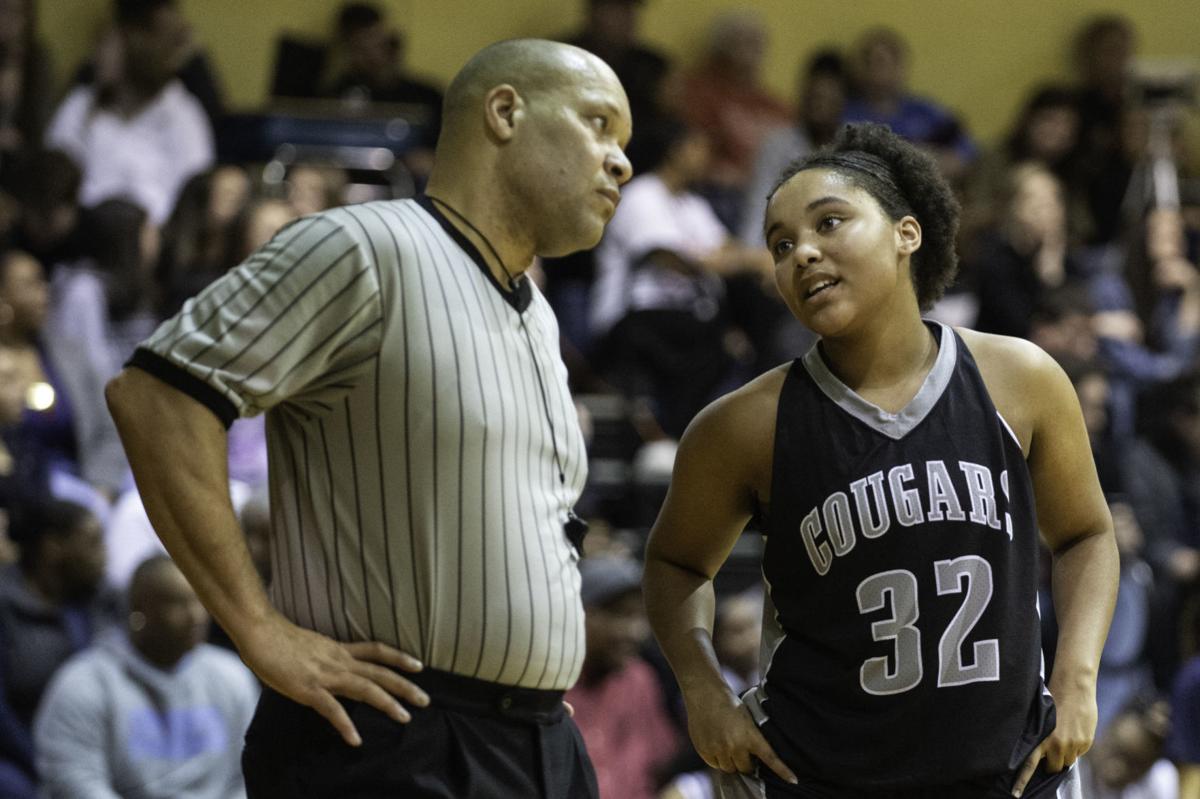 RCHS senior Trinti Hammond Flemming pleads her case to an official in Monday’s rivalry matchup with the Lady Rams. 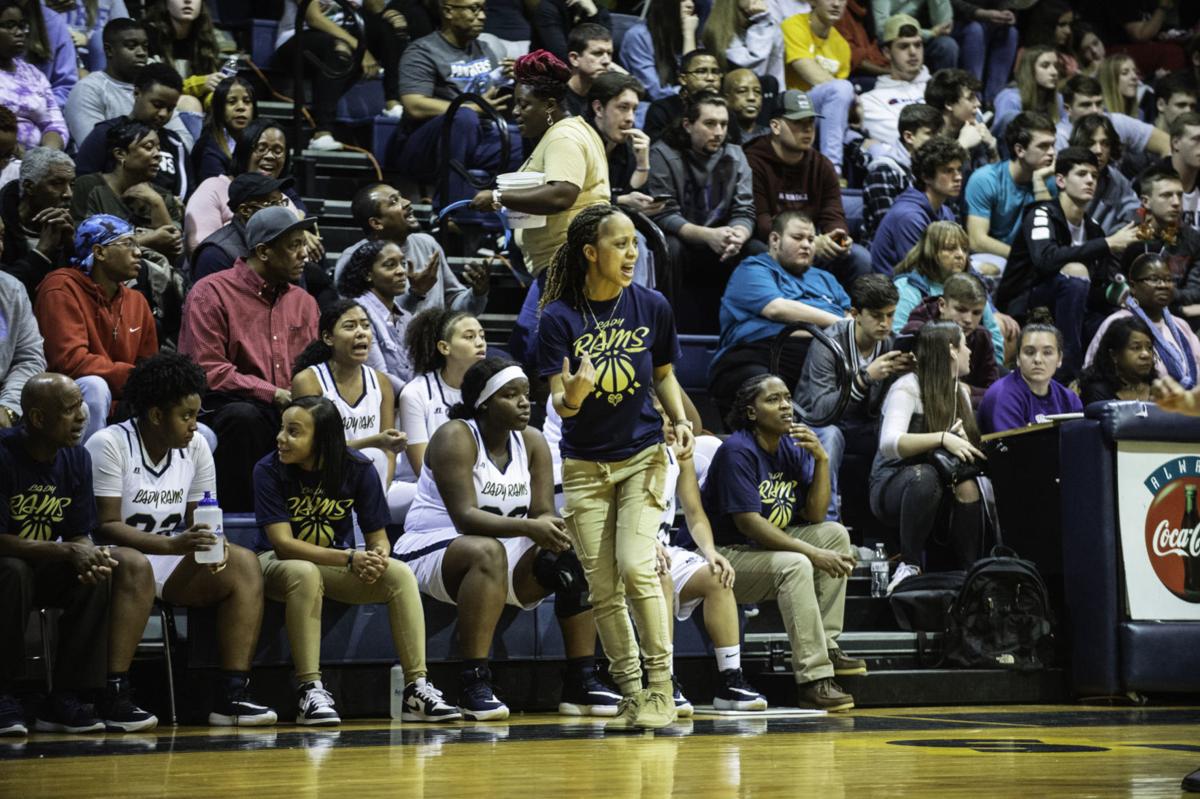 Junior guard Chlo’e McGhee dishes a pass to Torri Parson for a score in Reidsville’s 59-51 win over Rockingham Monday night.

RCHS senior Trinti Hammond Flemming pleads her case to an official in Monday’s rivalry matchup with the Lady Rams.

It was a long time in the making, but Reidsville finally secured a win over their long-time cross-town rival Rockingham by a 59-51 margin Monday night.

After a tight first half, it looked like the Lady Rams had the game on lock as they pulled ahead by as many as 16 in the third quarter. Even though the young Rockingham squad started to show signs of fatigue, they never gave up however, as they flipped the script in the fourth quarter, outscoring Reidsville 27-19 to nearly pull off the come-from-behind victory.

That final period of offense by Rockingham was the complete opposite in comparison to the third quarter, where the Lady Cougars managed just 3 points.

Poor clock management in the final few minutes by the Lady Rams nearly snatched defeat from the jaws of victory. Leading by several possessions with the game winding down, all Reidsville had to do was burn clock. But inexplicably, on three different occasions, RHS chucked up ill-advised quick shots which kept Rockingham in the game.

The Lady Cougars took advantage of the multiple blunders as they cut the lead all the way down to one possession at 51-48 with 1:13 to play on a Hope Smith 3-pointer. But ultimately, Reidsville hit their free throws down the stretch to salvage the win.

“When we went into the locker room at halftime, the girls took everything I said and they applied it. They are working really hard and to pick up the win against Rockingham, it means a lot,” Lady Rams head coach DeAnna Solomon said.

“They just have to understand to slow down and don’t be in such a rush when we’ve got a multiple possession lead late in the game.”

Prior to the RHS victory on Monday, Rockingham had dominated the series in recent years as the Lady Cougars entered the series on an 11-game, six-year winning streak that dates back to 2013 when the Lady Rams last won 61-52.

It’s been a fairly rough start to the 2019-2018 season for RCHS, a perennial top-tier Mid-State 3A Conference team who was likely still smarting from a 65-39 loss to McMichael on Dec. 20. The Lady Phoenix is another team that hasn’t had much success against Rockingham historically. So for the first time in recent memory, the county championship is up for grabs, and right now, it looks like Reidsville and McMichael might be the front runners for the title.

Thanks to several points off turnovers, the Lady Rams took control early as they went on a 6-0 run, but Rockingham went on a run over their own as they seized the lead at 7-6. It was a fairly tight affair in the closing minutes of the first quarter as Reidsville entered the second period with an 11-9 lead.

Rockingham guard Kerry Nelson hit a pair of 3-pointers and a shot in the low post by Skyler Fowler to help put the Lady Cougars on top 17-13, but Reidsville would answer in the closing minutes as Chlo’e McGhee knocked down a perimeter 3, then Kiera Perkins scored on a runner in the lane to give the Lady Rams a 21-17 lead with just over a minute to play in the first half. Each team had opportunities to add to the total, but came up empty prior to the buzzer in a two possession game.

The tide would turn in the Lady Rams favor in the third quarter however, as a series of transition plays and good perimeter shooting helped Reidsville go up by as many as 16 late in the period to set up the wild finish in the fourth.

Reidsville’s Amani Smalls had a game-high 22. She shot 10 of 15 from the free throw line including 7 of 9 in the fourth quarter to help the Lady Rams close out the win.

Nelson had 15 points including, three 3-pointers and Hope Smith had 15 as well for RCHS. She shot 7 of 9 from the free throw line and knocked down a pair of 3’s in the second half to help the Lady Cougars claw back into the game.

Following a break for the Christmas holidays, both Reidsville and Rockingham have a busy end to the week.

RCHS (0-3, 4-4) will host the Parks Chevrolet Tournament on Friday and Saturday, while the Rams hit the road to compete at the Eastern Guilford Holiday Classic on the same days.

The Lady Cougars will get a chance to avenge the loss when the Lady Rams (2-0) pay a visit on Jan. 3 with tip off set for 6 p.m. in Wentworth.