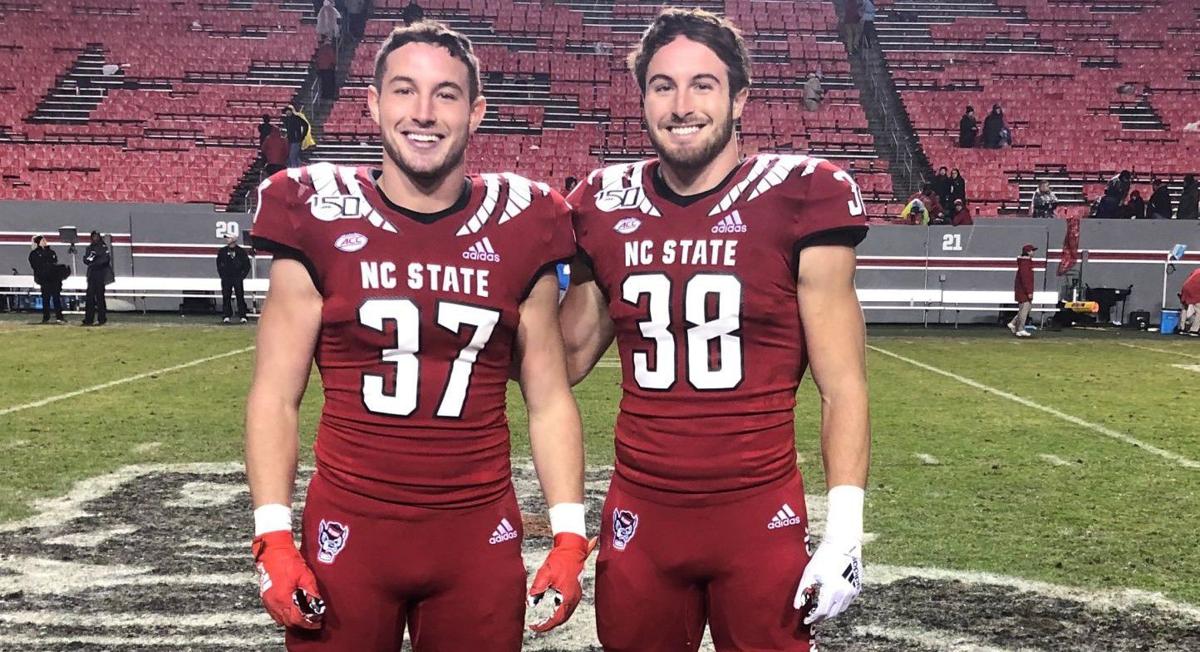 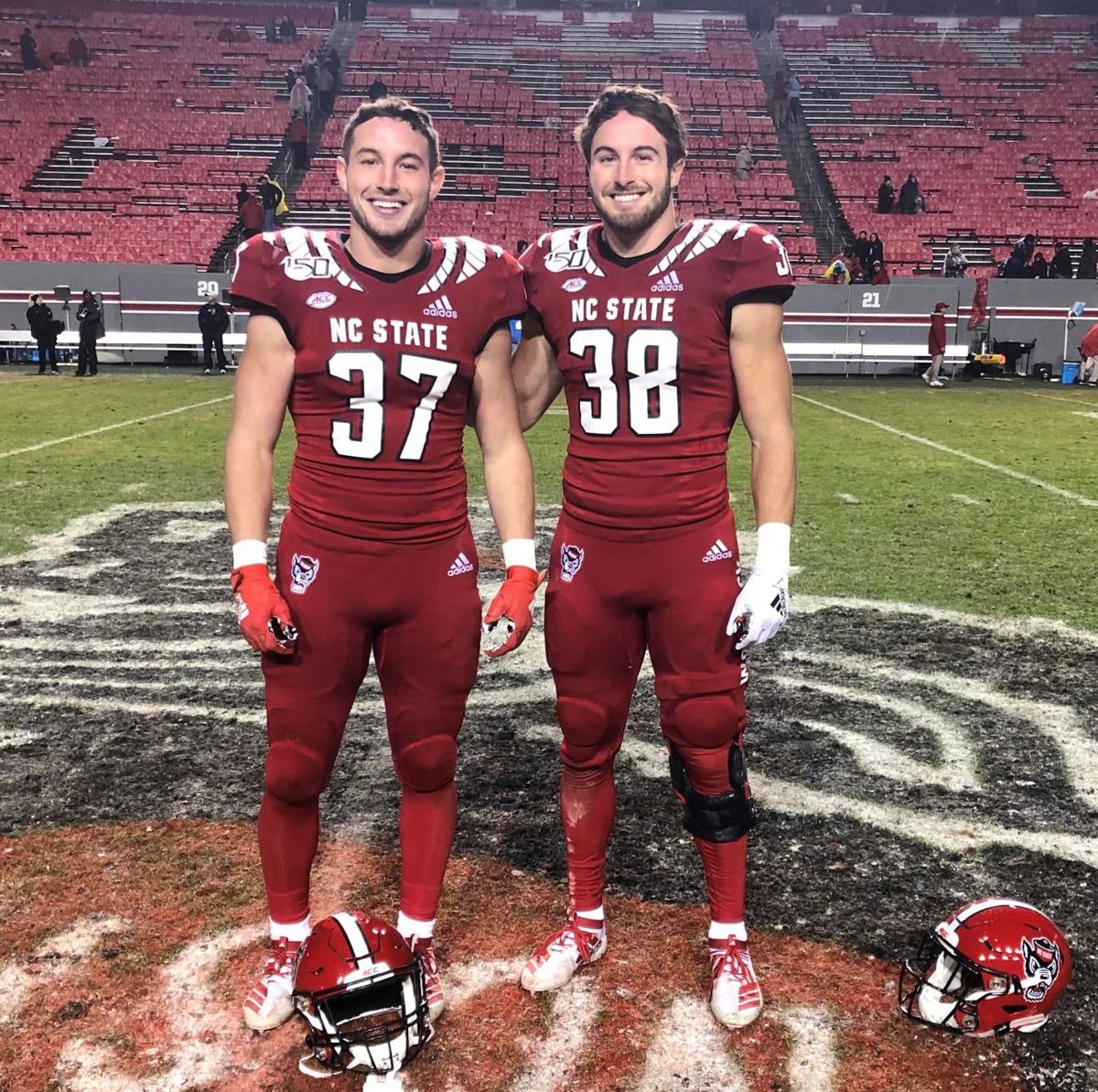 Twin brothers Tyler (left) and Will Dabbs stand together after their final college football game at N.C. State on Saturday night. The brothers, both former Morehead players, made the difficult decision to step away from the game to concentrate on medical school after they complete undergraduate studies.

Twin brothers Tyler (left) and Will Dabbs stand together after their final college football game at N.C. State on Saturday night. The brothers, both former Morehead players, made the difficult decision to step away from the game to concentrate on medical school after they complete undergraduate studies.

I’m pretty sure they didn’t want to take off their helmets.

At the end of NC States disappointing 41-10 loss to North Carolina on Nov. 30, 2019, Wolfpack football players, and twin brothers, Tyler and Will Dabbs, lingered on the field — saying goodbye to teammates, friends —and the game of football that has helped define their lives for the better part of two decades.

I had to ask them to take off their head gear for a photo, but the good-natured, warrior-brothers did as I requested and put their helmets on the turf at the 50 yard line on the Wolfpack logo for one final picture on their last night in pads at Carter-Finley Stadium Saturday.

For most serious players, football ends in high school. For a selected few, it ends in college. And for the really lucky ones, it ends in the pros. Not many though, and sometimes it is unexpected. But no matter who you are, it ends — and it’s difficult for those that truly love the game. Both brothers admitted that fact.

“Man it’s tough, it’s tough. We just reminisce on all of the time that we have put in with this sport and all of the people we have met along the way. It’s definitely a tough decision to step away from it. I think we all knew it was going to be an emotional night, on top of not having the outcome that we wanted, but I think that we can both rest easy knowing that this is a good decision for us and we are still 3-1 against the Tar Heels,” Tyler said.

The NCSU red-shirt juniors, who each accepted a preferred walk-on offers with the Wolfpack after graduating from Morehead High School in 2016, had one more year of eligibility remaining, but decided it was time to turn the page and concentrate on the next chapter of their lives.

“We could have one more year of eligibility since we red-shirted, but we are both looking at doing something in the medical field and we just thought it was time to move on and improve on our application process after we graduate,” Will said.

Both, who finished No. 1 and No. 2 in their high school class academically, said they are ready to concentrate on the future.

The heralded duo from Morehead’s football team that made it to the third round of the 2015 3A NCHSAA state playoffs were also key members of the Panthers 2014 and 2016 3A NCHSAA dual team state championship wrestling teams.

They played both ways during their four-year varsity career — Will as the quarterback and linebacker, and Tyler, as a running back and defensive back.

As they contemplated playing at the next level, they made it clear — the Dabbs brothers were a package deal.

Since they were knee-high to a grasshopper, they dreamed of playing major Division I, Power Five football, but that lofty goal was never a given.

Both received offers to play at a number of division III and II schools during their senior year of high school, but there was always a hitch. They wanted one, but not the other. Will and Tyler told those schools unequivocally that they would play together, or not at all. After attending

several camps, NC State was one of several universities that extended the brothers invited walk-on offers, and for both, it was a dream come true.

Humble, salt-of-the-earth young men, they never sought out the lime-light, but it always seemed to find them nonetheless.

Both faced many obstacles regarding injuries over the years. Tyler missed his entire high school senior season due to a broken ankle, then Will missed most of his sophomore college season with a bad knee injury.

The brothers, who also call one another best friends, said having the support of the other through those difficult times was tremendously valuable because both knew what the other was going through.

“I think just having each other, we were all about playing through each other. We had our injuries at different times so we just kept living the game through each other and it fueled our passion for the game, so I think that was really big,” Tyler said.

They leave the game with no regrets and the brothers said it all started with a dream and they encourage other young people with a big-time dream to always follow their heart.

“It was an incredible experience. What I would say to them is just believe in yourself. You know, we come from a small town and very few people get the opportunity that we got. I think the biggest thing is that we just believed in ourselves and that hard work would pay off and it has,” Will said.