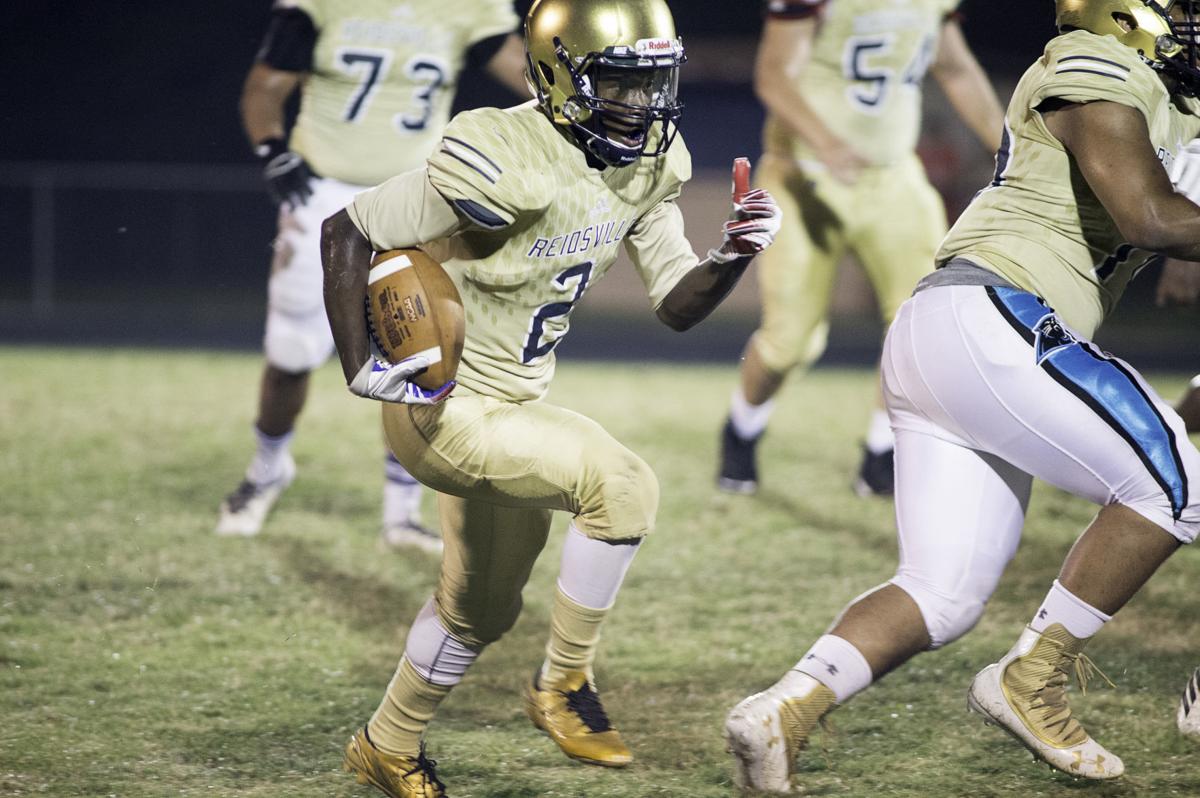 Reidsville senior wide receiver Demontez Canada looks for an opening in last Friday’s scrimmage versus Northeast Guilford. Canada was one of the Rams top weapons on both sides of the ball in the team’s 2018 championship run, and that should once again be the case this season. RHS opens up the regular season with a road trip to High Point Central on Friday night. 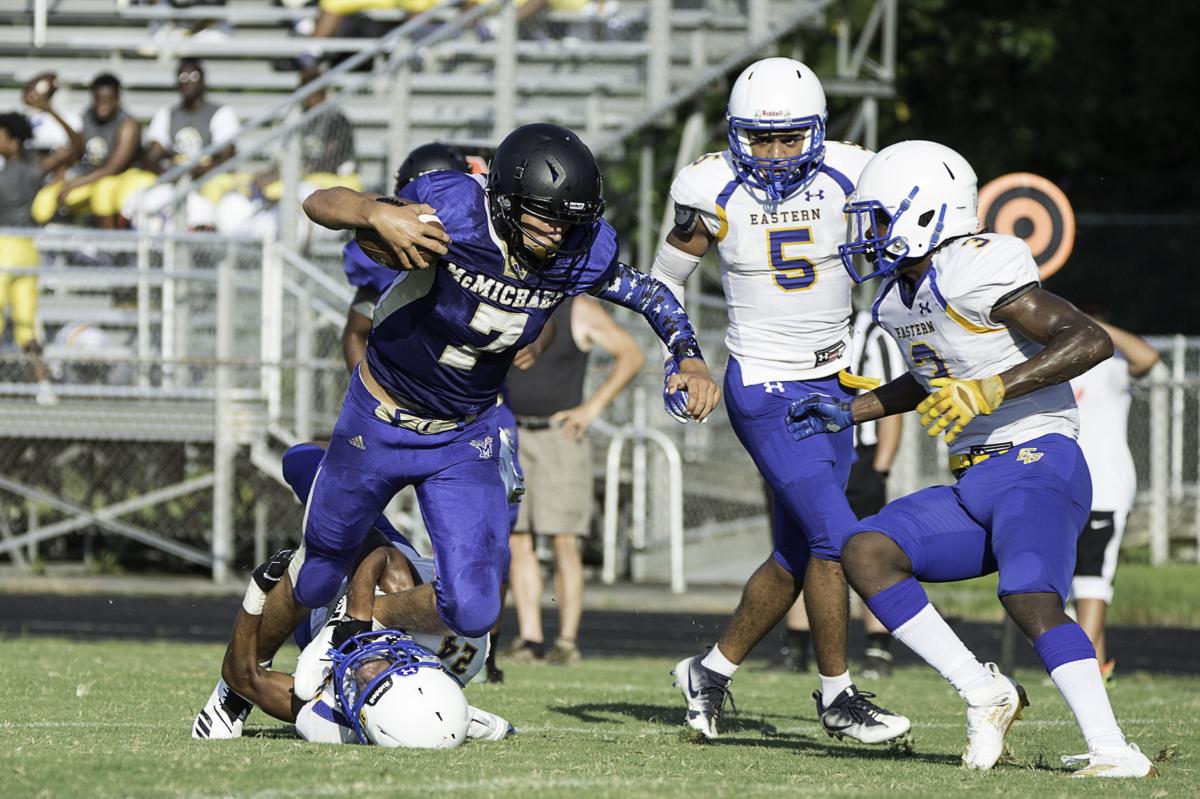 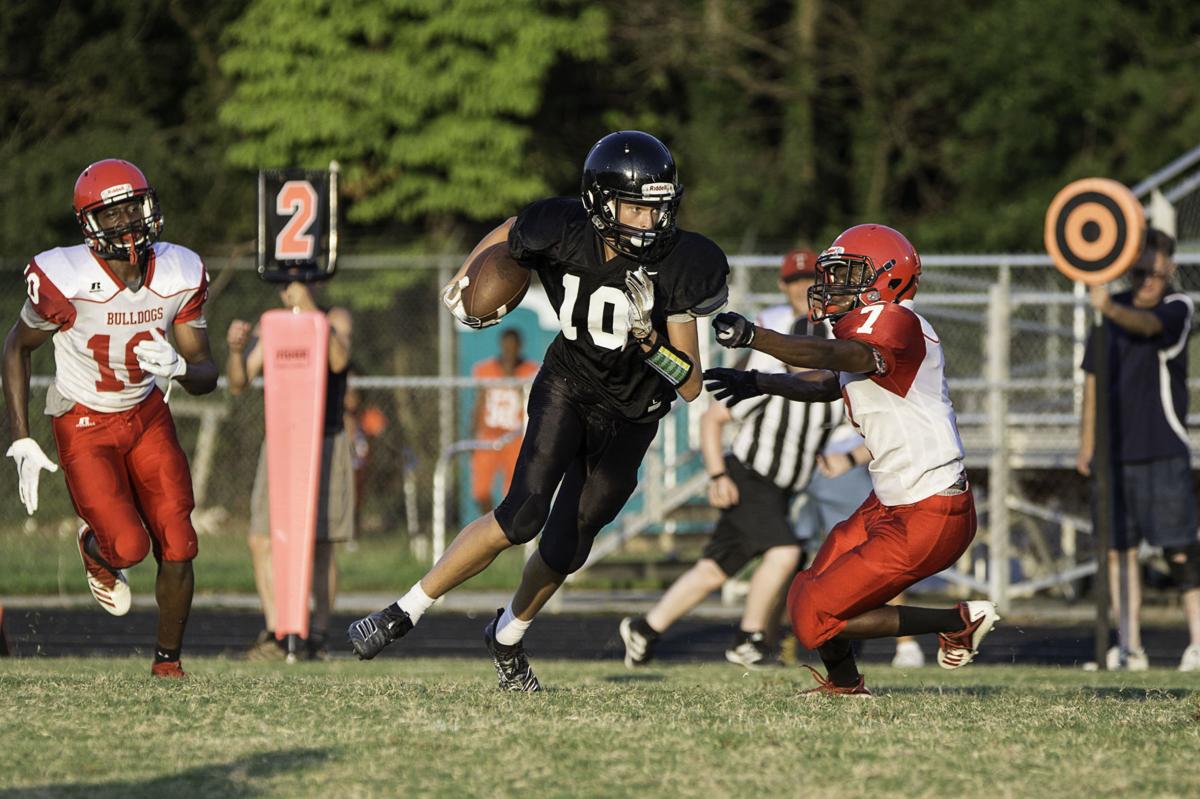 Rockingham junior wide receiver Drew Lee breaks free for a gain during a scrimmage versus Thomasville last Friday at the Farm Bureau Jamboree. The Cougars will host J.F. Webb in the 2019 regular season opener on Aug. 23. 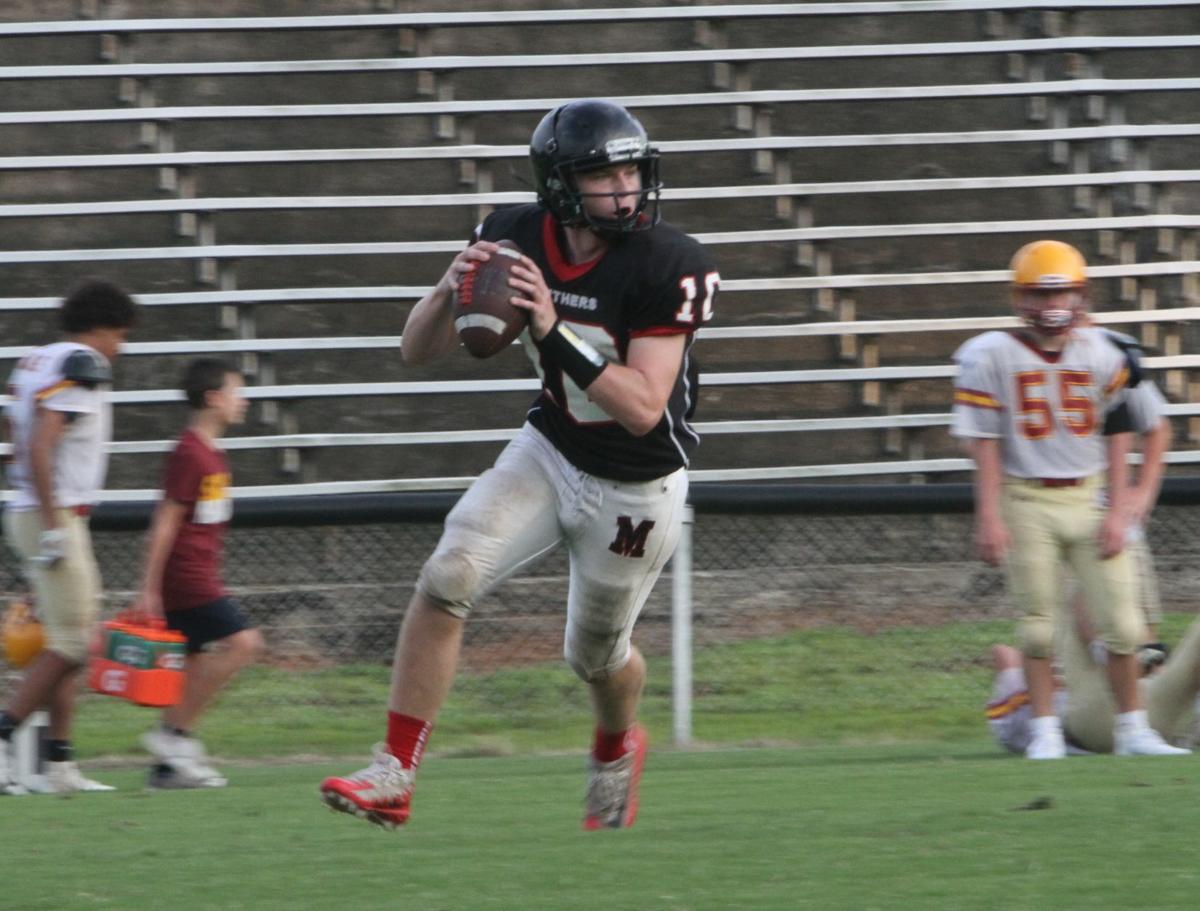 Morehead junior Hatcher Hutchins got in several quality repetitions at quarterback last week in a scrimmage versus South Stokes. The Panthers will open the 2019 season with a road trip to Western Guilford on Friday.

Reidsville senior wide receiver Demontez Canada looks for an opening in last Friday’s scrimmage versus Northeast Guilford. Canada was one of the Rams top weapons on both sides of the ball in the team’s 2018 championship run, and that should once again be the case this season. RHS opens up the regular season with a road trip to High Point Central on Friday night.

Rockingham junior wide receiver Drew Lee breaks free for a gain during a scrimmage versus Thomasville last Friday at the Farm Bureau Jamboree. The Cougars will host J.F. Webb in the 2019 regular season opener on Aug. 23.

Morehead junior Hatcher Hutchins got in several quality repetitions at quarterback last week in a scrimmage versus South Stokes. The Panthers will open the 2019 season with a road trip to Western Guilford on Friday.

County teams will kick off the 2019 season later this week

The clock is running and the countdown is on, so let’s get set to light this candle. Kickoff for the 2019 North Carolina High School Athletic Association football season is set to get underway later this week and McMichael, Morehead, Reidsville and Rockingham County are eager to strap it up for real and show what they’ve got.

Months of speculation and scrimmages are officially in the books, and now the quest begins for a select few elite teams vying for a shot at winning the 2019 NCHSAA state championship. Let’s take a look at what is on deck for week one:

At the top of the list in the county is Reidsville because until someone knocks them down, they are still king of the mountain. The defending 2018 2A state champs are loaded, experienced and expectations are once again sky high for a program that has been to the title game for the past three years in a row. Reidsville defeated Elizabeth City Northeastern 31-28 last season, narrowly lost to Wallace-Rose Hill 35-28 in overtime in 2017 and crushed John A. Holmes 58-12 in the 2016 state title game. During that span the Rams posted a collective record of 47-1 while putting up big numbers along the way.

Those expectations combined with the confidence success breeds along with the returning experience factor means Reidsville will be in the hunt for the title once again.

Their first step in the quest for another championship begins with a road trip to High Point Central on Friday. They will meet up with a Bison team eager to rebound from last season’s disappointing 3-8 finish. HPC, who competes in the tough Metro 4A Conference, have 18 returning seniors and possess the numbers from a roster perspective to give the Rams a solid test.

Reidsville’s offense will likely look to set the tone early. Led by quarterback Kyle Pinnix, last season’s state championship MVP, the junior has looked much improved from last season, and that spells bad news for the opposition. Blessed with mind-boggling depth at wide receiver, Pinnix has so many options that he has the potential to put up big numbers this season. The receiving core, led by seniors Demontez Canada, Colby Johnson and Breon Pass — are all potential game breakers. The Rams also have depth and experience running the football led by senior Lionel Long. Big, powerful and explosive, Long is looking to have a breakout season. Up front on offense and defense are the biggest question marks for Reidsville after losing several key players from last season’s team. But the new crop is eager to earn their stripes and early indications say the Rams will once again be tough to beat in the trenches.

McMichael has got nowhere to go but up coming off an 0-10 finish in 2018. The Phoenix faced more than their fair share of hardships in head coach Daniel Bradford’s first season at the helm as injuries and inexperience forced McMichael to fold the JV team and incorporate them into the varsity squad. It was a dual edged sword in many regards because underclassmen were baptized by fire, but on the positive side, those young guys now have varsity experience under their belts. The Phoenix opens up on the road at T.W. Andrews on Thursday.

The Red Raiders, who finished at 3-8 playing in the Pac 7 2A Conference last season, should be a good matchup for McMichael.

The Phoenix looked solid collectively at all positions during preseason scrimmages, and sophomore quarterback Matthew Wright looks like he could be the real deal. For the most part, he made good decisions in the pocket and threw crisp passes. McMichael’s success will ultimately come down to if they can stay healthy. Bradford said numbers, although better than last year, are still relatively low. He’s hoping to be able to have a JV team as well, but said if injuries do start piling up, the Phoenix may once again be forced to incorporate the two programs into one.

Similar to McMichael, Morehead head coach Lin Stadler said numbers and the health of his players is a concern as well. The Panthers will get their first regular season test on the road versus Western Guilford, a team that Morehead has beaten twice in a row.

The Hornets will be eager to avenge their previous two losses to the Panthers, especially considering they blew fourth quarter leads in both games.

Stadler says he thinks he’s got a solid team, but depth and a reliable shot gun snapper are the two biggest question marks heading into the regular season opener. Poor snaps caused plenty of headaches last week and if that doesn’t get fixed by the end of the first quarter, don’t be surprised to see quarterback Johnnie Dalton line up under center. If they have to abandon the shot gun altogether, that’s going to put an added emphasis on the importance of the run game and blocking up front in order to give Dalton time in the pocket.

Western Guilford has looked much improved in the preseason coming off last year’s disappointing 1-10 finish. Hornets head coach Brian Terwilliger has two seasons under his belt, so the players are starting to adapt and buy-in to his system.

Morehead should be the favorite for this one, but a shaky start by the Panthers could change expectations rather quickly.

Rockingham opens up the 2019 season at the friendly confines of Cougar Pride Stadium when J.F. Webb comes to town on Friday night. Rockingham should be favored in this one as the Warriors seek to get back on track after a disappointing 0-10 finish last season. The Cougars went through their share of growing pains last year as well as they closed out at 3-8. Injuries were a key factor in Rockingham’s slump last season, and so far, they have looked like a much-improved team in the preseason. RCHS head coach Brad Baker’s has a full two seasons under his belt as he continues to lay the foundation for what he hopes will become a winning program. A victory versus Webb would go a long way as a confidence builder. Rockingham has three very winnable games in Webb, Eastern Randolph and Western Guilford in successive weeks to begin the season before they go up against powerhouse Reidsville.

Don’t expect Baker, who teaches the philosophy of being 1-0 at the end of each day, to be looking that far ahead. But considering the strength of the Mid-State 3A Conference that the Cougars will face down the road, for it to be a successful season, Rockingham needs a strong start.