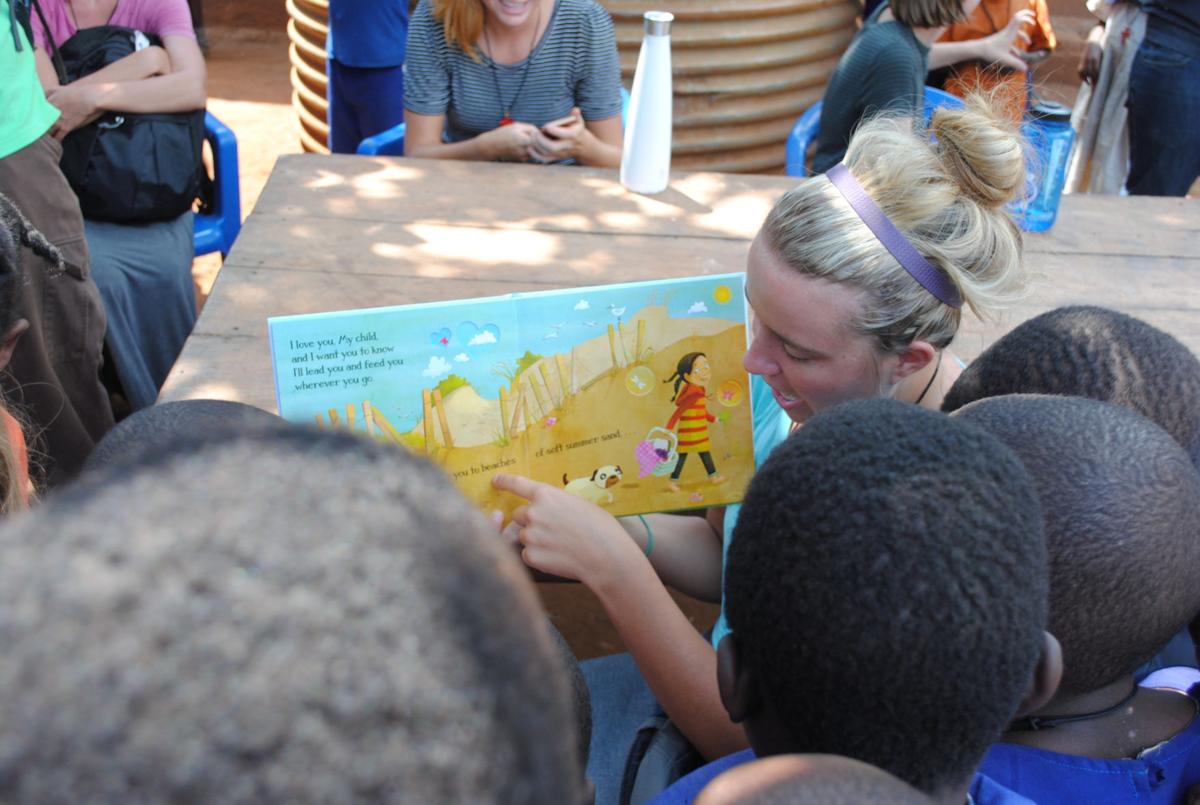 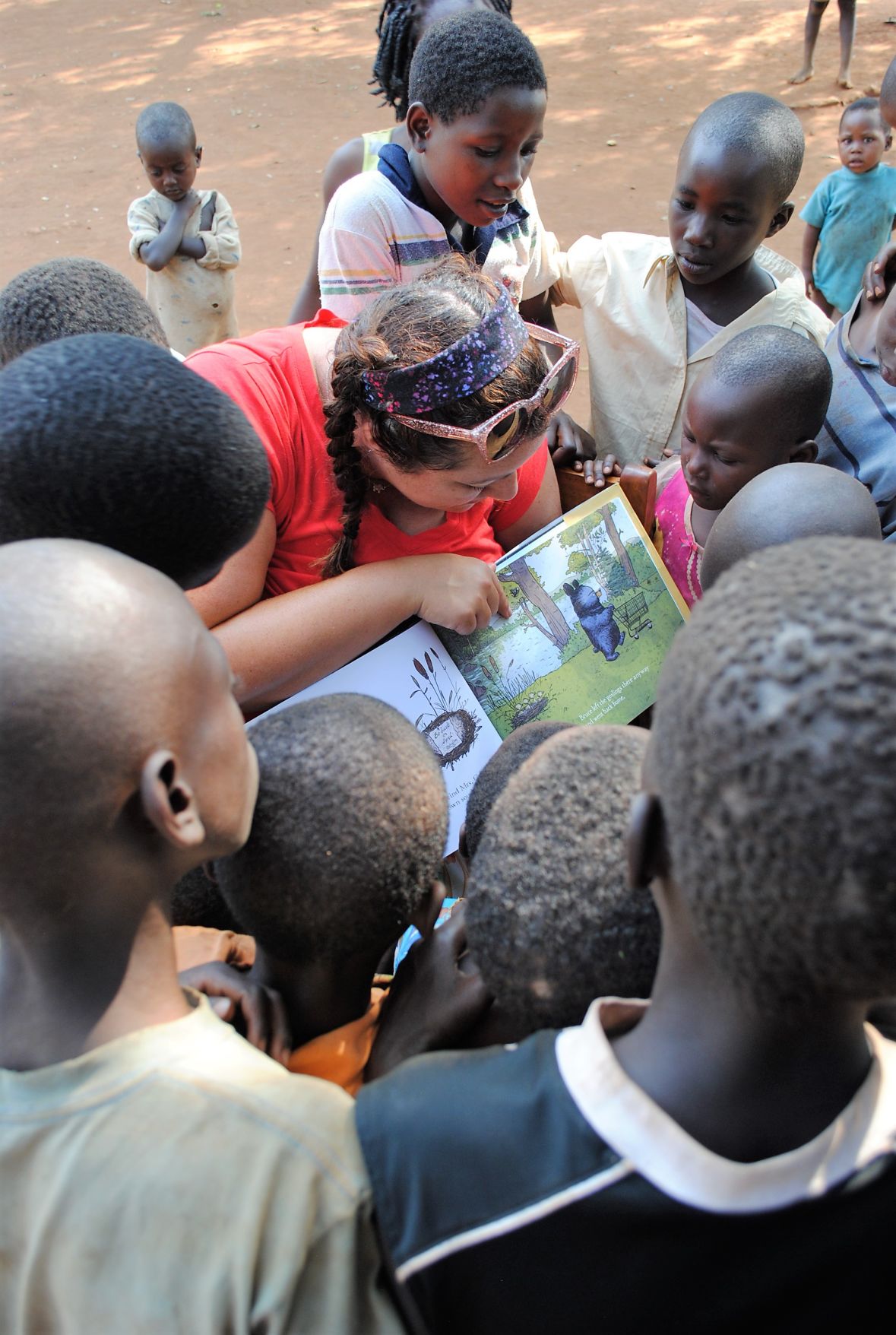 Draper Elementary School Principal Christy Bailey reads to a group of students during the July 2017 trip to Coburwas Primary School. 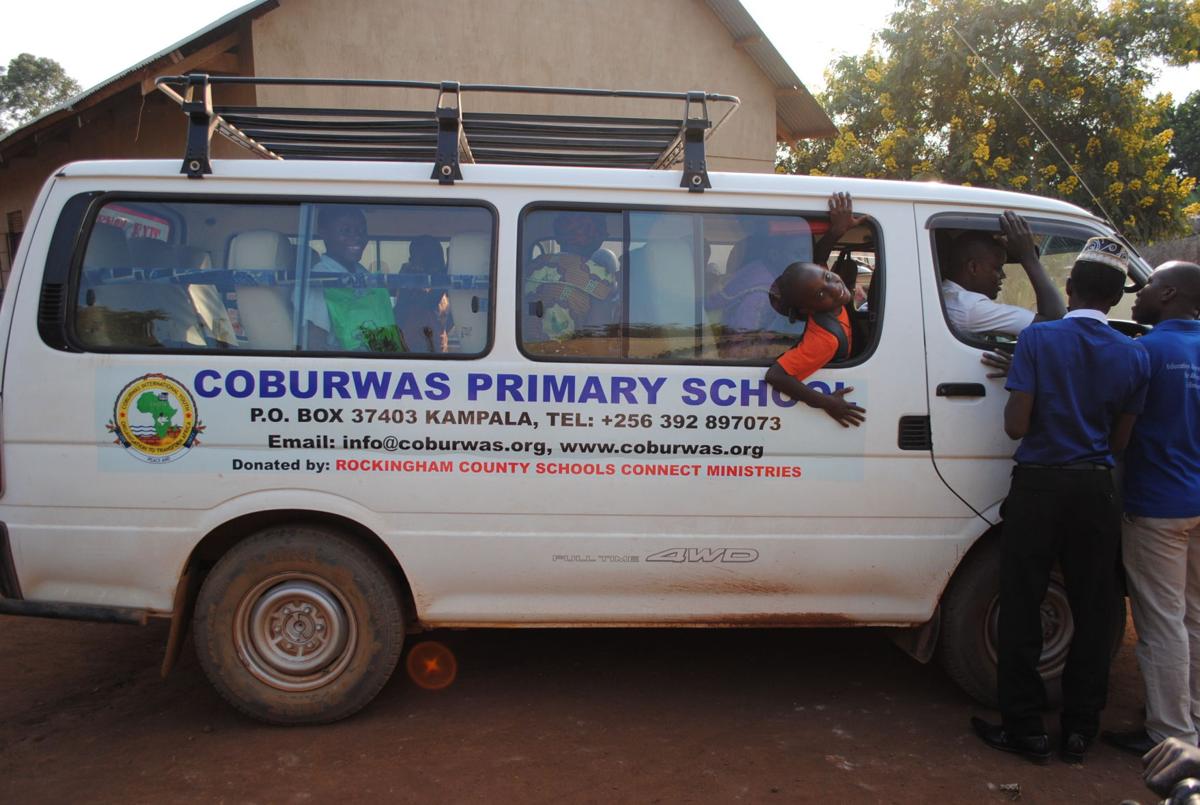 Coburwas Primary School students ride in the school's new van for the first time in July 2017. This van was purchased with funds raised by Rockingham County teachers. 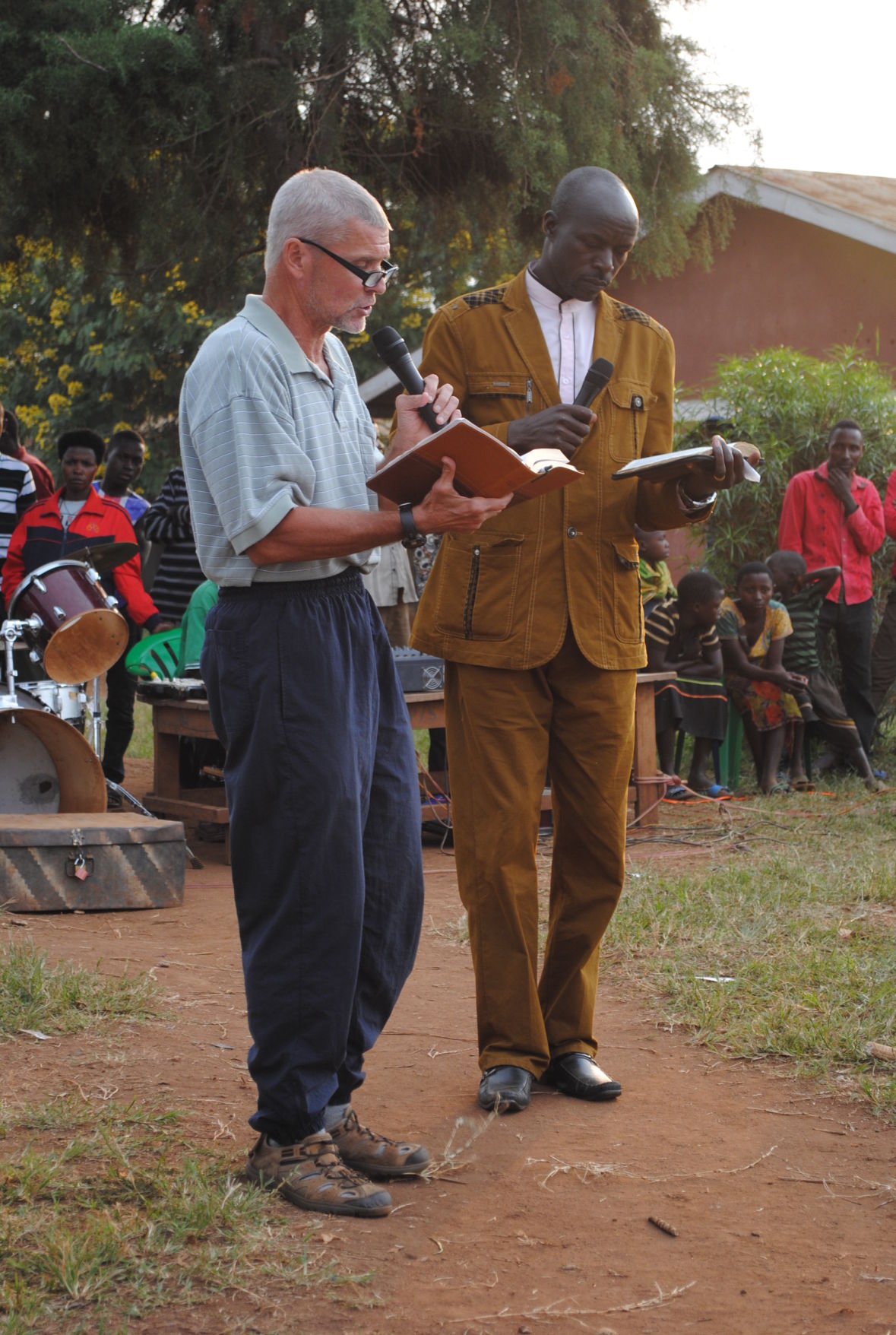 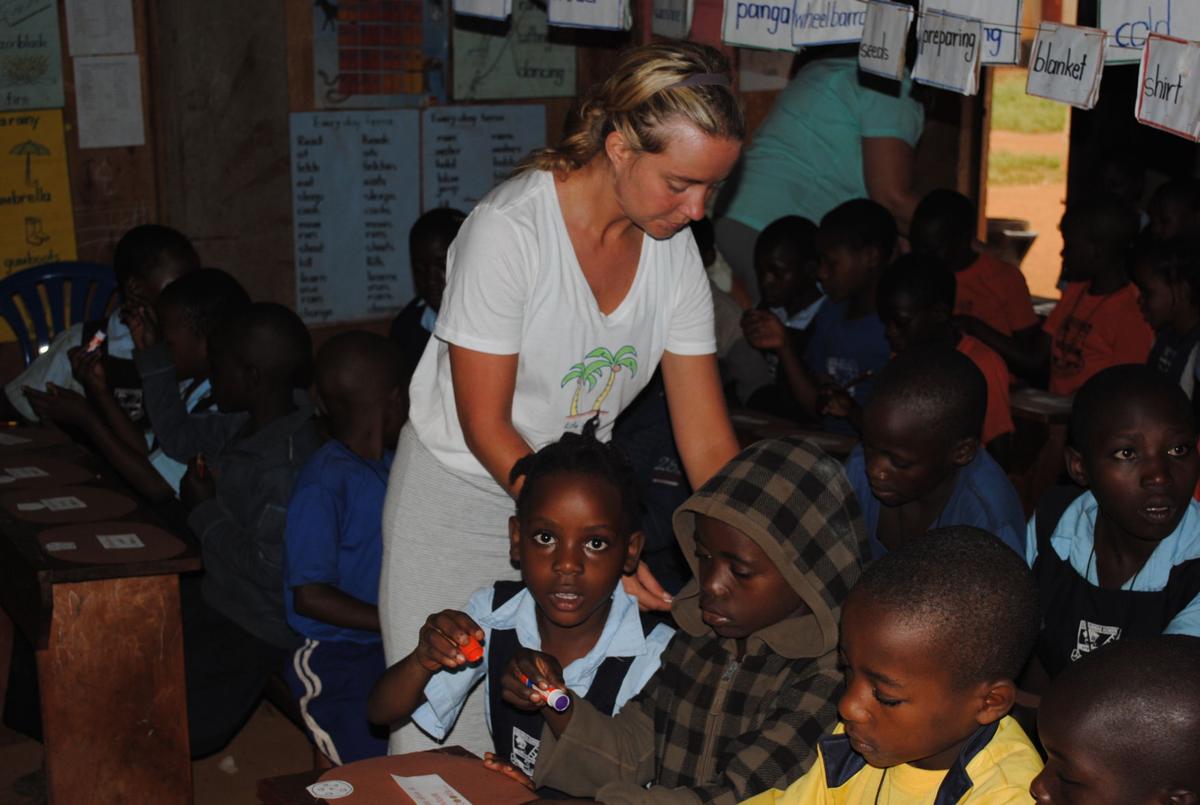 Leaksville-Spray Elementary School Teacher Dawn Crews leads an arts activity about information recall from a story she read to the students at Coburwas Primary School in July 2017. 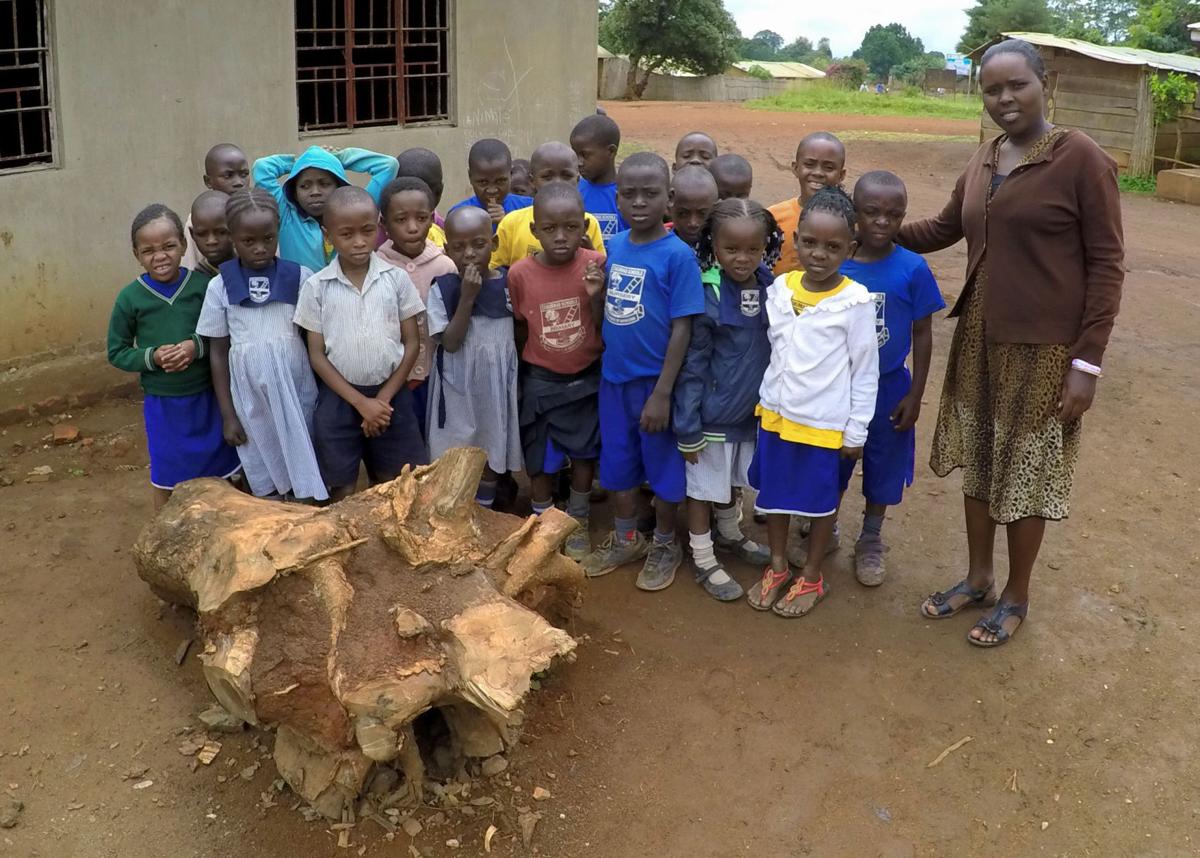 The Coburwas Primary School Pre-K class comes together for a group photo in July 2017.

Draper Elementary School Principal Christy Bailey reads to a group of students during the July 2017 trip to Coburwas Primary School.

Coburwas Primary School students ride in the school's new van for the first time in July 2017. This van was purchased with funds raised by Rockingham County teachers.

Leaksville-Spray Elementary School Teacher Dawn Crews leads an arts activity about information recall from a story she read to the students at Coburwas Primary School in July 2017.

The Coburwas Primary School Pre-K class comes together for a group photo in July 2017.

EDEN — Each year since Rockingham County teachers kindled a relationship with a Ugandan school for refugee children back in 2015, the mission has continued to grow more ambitious.

The partnership was forged by Holmes Middle School teachers and students as they Skyped with kids over 7,000 miles away at Coburwas Primary School in the Kyangwali Refugee Settlement.

Now, as local educators prepare for the third mission trip to the camp as part of Rockingham County Schools Connect Ministries, their service to the refugee community has evolved from helping out at the school to assisting in the school leadership’s economic development vision.

On a smaller scale, the group plans to help rid the small school of pests big and small.

To keep cattle off school grounds, the visitors plan to finish building a fence around the primary school.

“When we got there last year, we found out the government had, since they were so successful, given them more land, so of course you need a bigger fence, so we're raising money to extend the fence,” said Holmes Middle School teacher David Winn, North Carolina chapter leader of Coburwas International Youth Organization to Transform Africa.

To protect the kids from chigoe fleas, parasitic insects that burrow under skin, the travelers plan to offer footwear.

“We are shoeing, buying shoes for the whole school, and we're not going to carry shoes,” Winn said. “We're going to buy them there in the local economy, so that'll help the economy there.”

The group’s larger plans focus on helping the organizers at the settlement to build and develop that economy and preparing young people with life skills for after graduation.

“The biggest picture, they want to get an economy inside,” Winn said. “Everything now, most of the stuff, the money, everything comes from outside. It's not very self-sustaining inside the refugees' settlement, and most of those people are not going back to the Congo or South Sudan, any, in the foreseeable future, so they need something there where at least the income would stay in there.”

Winn explained that one of the biggest focuses for CIYOTA founder Joseph Munyambanza is developing a youth center.

“Ideally, all the kids would go to school after high school, but that's not realistic and so unemployment for kids after high school is just astronomical, so Joseph is trying to give them some life skills,” Winn said. “We're going to build a center and hopefully they'll be able to staff it with people who can teach them. We're going to hopefully provide some of that teaching expertise too.”

The center, which would function like a trade school, would focus on the skills young people need to be self-sufficient in their environment, skills like farming, construction, carpentry and mechanics for bota botas, or motorcycles.

The youth center concept already has land with one building present.

Another long-term goal is to establish a second high school.

“Only one high school in the camp and it’s got two, three thousand people there,” Winn said. “You've got classes with two hundred kids in them and that's where Joseph went to high school.”

Children that don’t go to the Kyangwali high school end up divided and sent out to boarding schools hours away, according to Winn.

This year, Rockingham County teachers and others will visit Kyangwali in two groups from June 16 to July 2 and July 2 to 17.

As organizers ready for the summer service trip, they are still seeking funds to go toward the service projects. In addition to individual support, Winn is interested in bringing in local businesses, churches and whole communities as partners.

“I'd like Eden, Rockingham County to adopt that school, and we pool our resources and have Rockingham County's adopted Coburwas Primary School in Uganda,” Winn said. “Eventually I'd like to get another school system to adopt another one somewhere and just help.”

In 2017, funds raised supported the purchase of the school’s first van, a significant gift for a school to which most students walk more than two hours each morning, as well as fencing.

Organizers ask that those interested in supporting the trip make a monetary donation.

To donate to the mission, visit loveafricamission.org and click Support, then Support a Team Member. This trip is listed under the Uganda Summer 2018 category as David Winn/Supplies.

According to Winn, the group has encountered unexpected bag fees for the flight at $35 per bag. The group expects to have more than 38 bags of supplies to bring.

ROCKINGHAM COUNTY - A group of Rockingham County teachers have left their mark, yet again, a…

ROCKINGHAM COUNTY — In July, 12 Rockingham County teachers will journey to the Kyangwali Ref…

EDEN — From half a world away, Holmes Middle School students have had a chance to talk about…