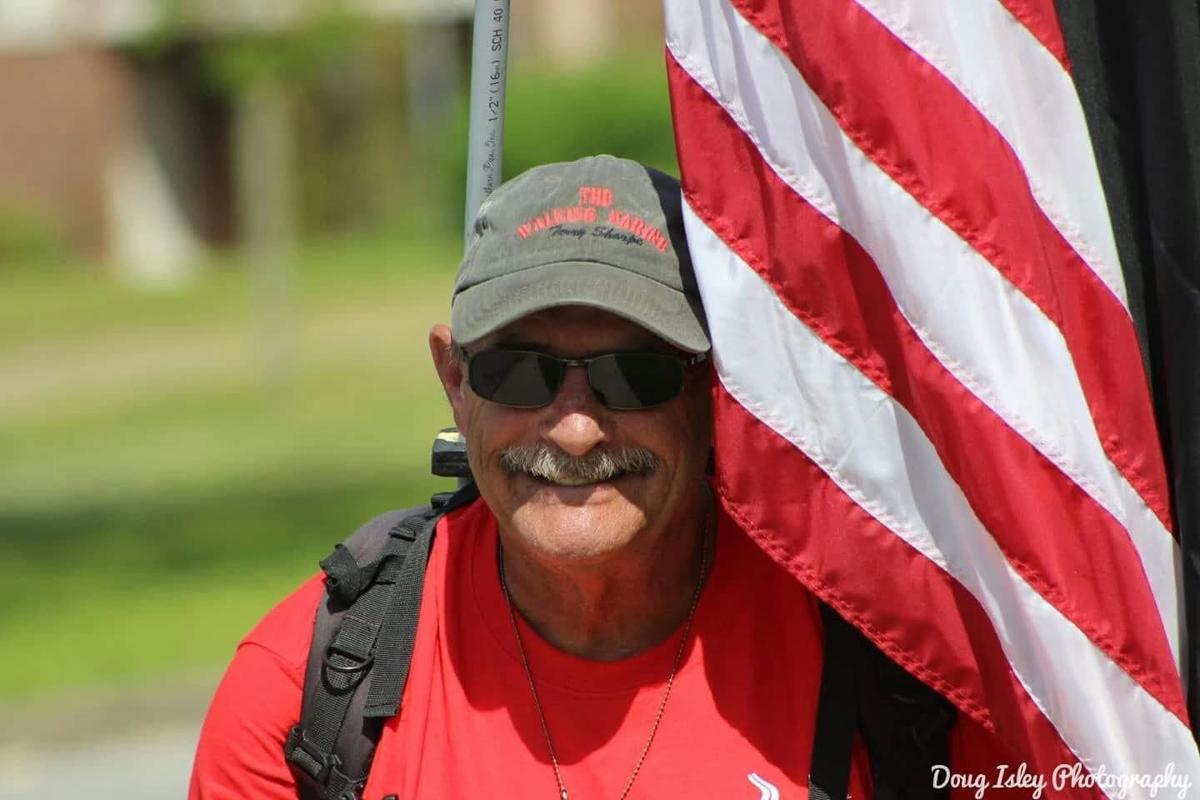 Terry Sharpe, 68, is better known in the region as “The Walking Marine.” 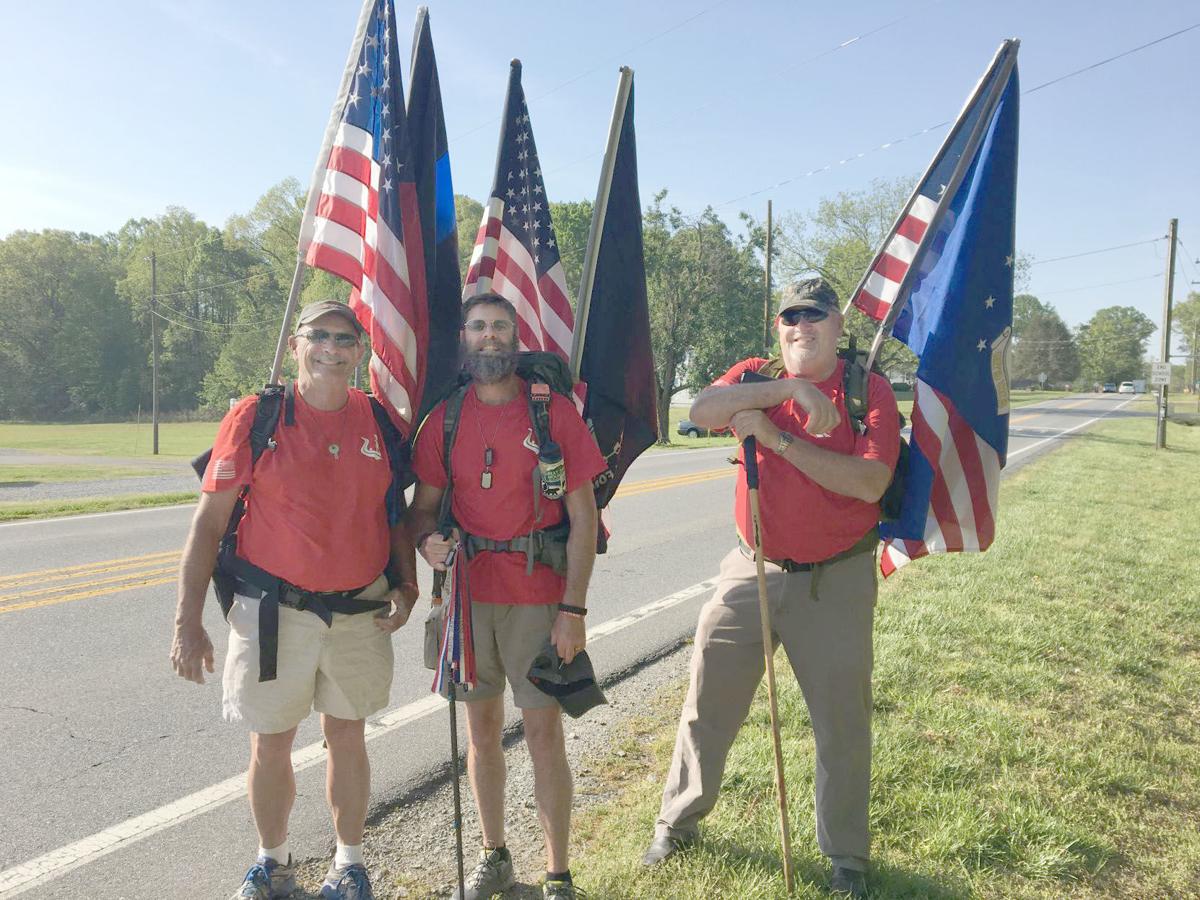 Terry Sharpe (left) and fellow veteran Mike Boncek (middle) take a quick break in Monroeton during their second day of a 300-mile walk to Washington, D.C., in 2018. Steve Moore (right) also joined them as they walked through Rockingham County. 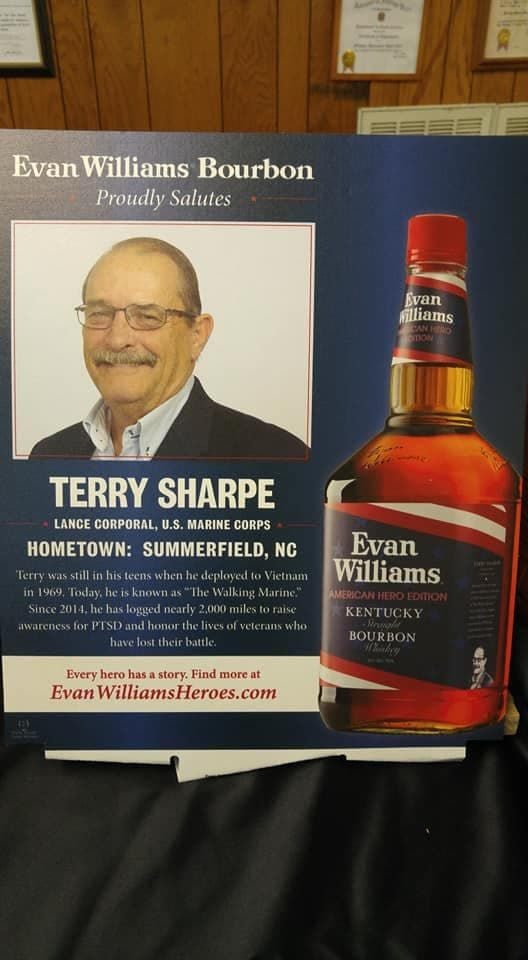 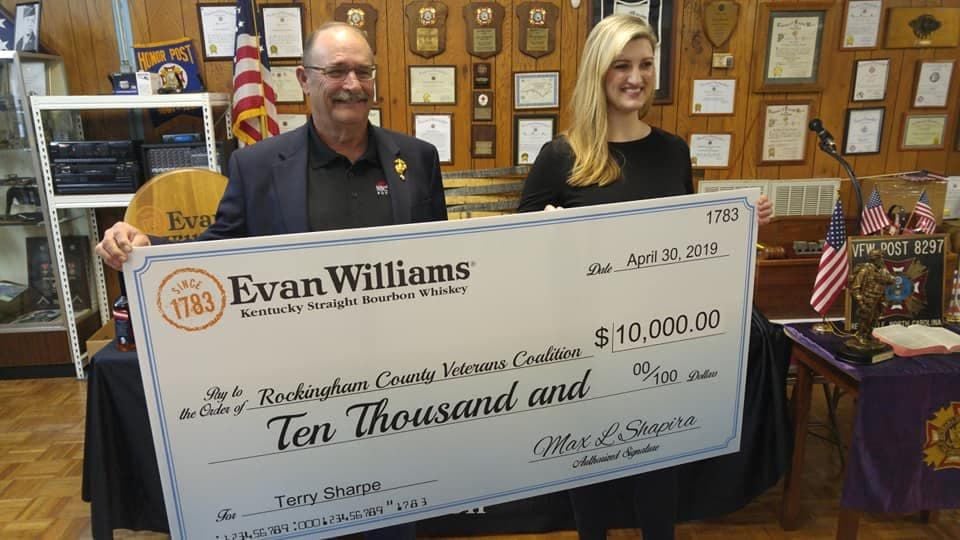 Terry Sharpe, 68, is better known in the region as “The Walking Marine.”

Terry Sharpe (left) and fellow veteran Mike Boncek (middle) take a quick break in Monroeton during their second day of a 300-mile walk to Washington, D.C., in 2018. Steve Moore (right) also joined them as they walked through Rockingham County.

That’s the level of dedication Marine Corps Veteran Terry Sharpe has committed to his journey to increase awareness of veterans’ issues.

Anyone who has witnessed “The Walking Marine” in action knows his devotion to informing the public of the troubling fact that each day, 22 veterans take their own lives in the U.S.

Step-by-step, day-by-day, the 68-year-old has made an impact during his seven 300-mile walking trips from Summerfield to Washington, D.C.

The 68-year-old will be the first to tell you he’s just a messenger and advocate, but his dedication to increasing suicide awareness has had a direct and positive impact on the local community and veterans’ loved ones who carry a heavy burden.

And his walk has helped provide light for veterans who at one time couldn’t see a way through to peace of mind.

Sharpe, who served a 13-month stint in Vietnam at 18 as an M-16 gunner, says it isn’t his experience overseas that compelled him to take action.

“It’s the Marine in me,” said Sharpe, who enlisted at the age of 17 and worked his way up to Lance Corporal before returning stateside after two years of active duty.

Sharpe began his walks in September of 2014 following boiled-over frustration and a $100 bet with his wife.

Outraged by the lack of public concern, Sharpe took to the road following the arrest of Marine Andrew Tahmooressi — who was detained by Mexican authorities after accidentally crossing the border near Tijuana with legally registered weapons and ammunition in the back of his pickup truck.

Sharpe walked out of his house with only one plan — to increase awareness of Tahmooressi’s plight to a level that would help the fellow Marine return home.

Along the way, Sharpe found a new friendship with Allen Brown — a fellow Marine who had served in Sharpe’s battalion.

Brown, who ran into Sharpe near Danville during the initial walk, fell in line with Sharpe all the way to D.C.

But for Sharpe, one 300-mile walk was not enough.

Frustrated with the lack of response to Tahmooressi’s arrest, the proud and hard-headed Marine turned right back around for a second trek to Washington.

Finally, 600 miles later, he returned — just one day before Tahmoressi was released from Mexican custody.

Since then, the Summerfield resident has continued to devote his time and resources to veterans.

With the help of others, Sharpe has continued his annual 300-mile mission over the last five years. But since those first two trips, he’s shifted his focus exclusively to veteran suicide.

“I always honor veterans, but my sole purpose is to bring awareness every day,’’ Sharpe said. “There are well over 8,000 suicides a year. We’ve lost more than was killed in Vietnam.”

Sharpe said that he suspects the national statistics tallying 22 death a day are actually too low. And he’s not naive enough to think the daily suicide rate can shrink from 22 to zero.

“There’s always going to be someone that you can’t stop, but there is somebody out there that all they need is somebody to pull them back and stop them,” Sharpe said.

He stressed that friends and family play a key role in helping the mental health of vets by talking and checking in with their veteran loved ones.

“They can tell when they are doing things that are out of character. That’s when you need to talk to them and check on them. If they need help, get the help,” Sharpe said.

The advocate says it’s not his place to provide advice for veterans going through tough times, because he isn’t as qualified as a trained doctor or psychiatrist.

His work is in spreading the message and providing tools to help veterans connect with the professionals that can help.

And even when Sharpe isn’t on one of his 300-mile walks to the nation’s capital, he’s literally standing up for the veterans who’ve taken or may attempt to take their lives.

In October, Sharpe molded himself into the “Stand Tall Marine” on behalf of the Nine Line Foundation.

For 22 hours straight, Sharpe stood at the corner of Battleground and New Garden Roads in Greensboro — again trading the luxury of comfort for the benefit of others.

The stalwart not only spread the word about a growing epidemic — his efforts landed public support and $700 in donations toward Nine Line’s initiative to build mini houses for homeless veterans.

Earlier this year, Evan Williams Bourbon paid tribute to Sharpe’s efforts by featuring the Lance Corporal on one of its American Hero Edition labels.

The distiller also donated $10,000 to the Rockingham County Veteran’s Coalition, which went to its food pantry.

In May 2018, Sharpe was given the honor of placing the wreath at the Tomb of the Unknown Solider in Arlington National Cemetery.

Sharpe said the stand was tough and that he would gladly trade it in for an opportunity to walk 22 miles in the same consecutive 22-hour time frame for which he stood.

Sharpe, who suffers from emphysema, admits that with every passing year, the walks to Washington get harder and harder.

Yet, despite the pain and struggle, one thing is clear.

Sharpe will continue to stand up and walk forward for others with the American flag strapped to his backpack.

The steadfast Marine plans to tighten up his shoelaces yet again on May 1, and embark on another 22-day walk to D.C. — his eighth and another 600,000 steps in the battle to bring veteran suicide to the forefront.

“I just keep telling myself that I might be hurting, but not as bad as some of our veterans that are hurting — men and women,” Sharpe said. “It’s painful, but they are in a lot more pain. I know that my day will end, and I will be able to sit down and put my feet up and start over the next day.”

To learn more about “The Walking Marine” visit http://thewalkingmarine.com and to donate to his upcoming efforts to bring awareness to veteran suicide, visit: https://www.grouprev.com/NineLineFoundation-TheWalkingMarine.

Summerfield Veteran Terry Sharpe on the importance of thanking veterans