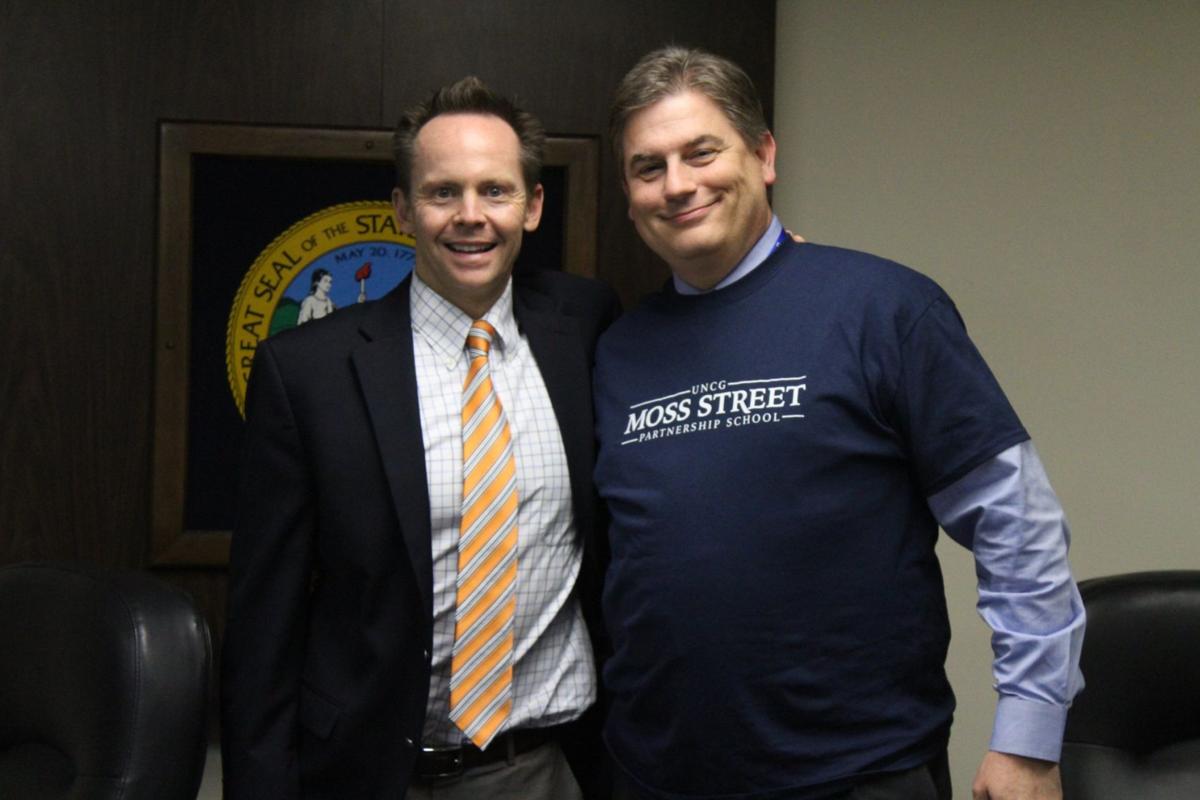 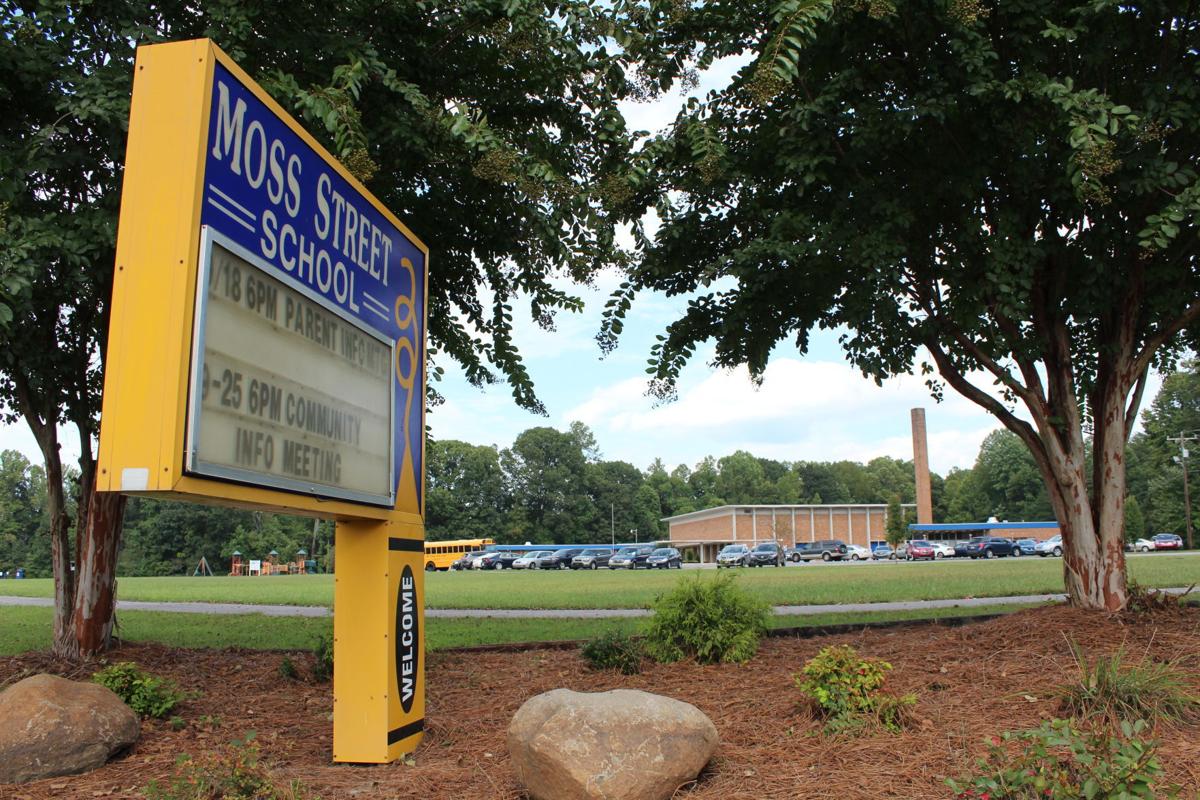 Moss Street Elementary is located at 419 Moss St. in Reidsville.

Moss Street Elementary is located at 419 Moss St. in Reidsville.

“As superintendent of schools, it’s my duty to make sure that my number one concern before anybody else in this entire school district is the children,” said Superintendent Rodney Shotwell. “It’s with my heart and soul that I feel like, (with) a positive vote here tonight, you will be forever changing the lives of children to infinity, because changing one life will change the life for the children that they have.”

By unanimous vote, the school board approved the Memorandum of Agreement and lease, finalizing the yearlong planning process. Board Member Wayne Kirkman was absent for the vote.

“We've worked very hard with this," Shotwell said. “This was something I could remember (Board Attorney Jill Wilson) telling me back in November, ‘You know, you can't get this done in a week,’ and here we are, March 1.”

The agreement goes into effect immediately and places the school under UNCG’s jurisdiction and supervision from Aug. 1 through June 30, 2023 unless RCS or UNCG elects to terminate the agreement early or extend it.

UNCG selected Moss Street as the site for their lab school based on the school board and community’s interest, distance to UNCG and resources and community support available to the university, according to the agreement.

The idea stems from a law passed by the North Carolina General Assembly in 2016 which was modified in 2017.

The UNC system office selected UNCG to run one of these public lab schools, and, in May, UNCG officials and Shotwell began discussions around this project.

Through this partnership, the university plans to introduce and expand creative, cutting edge initiatives at the school.

The five year goal of the partnership school is to raise the school’s rating to a B with 80 percent of students passing state tests. As of 2016-2017 data results, Moss Street holds a School Performance Grade of D.

For Rockingham County Board of Education Chair Amanda Bell, signing this agreement helps to repay a debt to the families affected by the closure of Lawsonville Elementary School in Reidsville.

“In 2013, we stood in a gym filled with parents who loved Lawsonville Elementary School, but this board decided to close that school and to send that population to Moss Street,” Bell said. “At that time in that facility with weeping parents, upset children, we made a promise. We said we would do ever thing we could do to give these children all of the resources that they need. Tonight we have an opportunity to make that promise a reality.”

The Memorandum of Agreement and lease outline both RCS and UNCG’s expectations and plans for the partnership.

“We have stakeholders out here who are here to see if this is going to see if this is a positive move for Rockingham County Schools, so I'm charging you to hold UNCG to the agreement and I'm charging UNCG to hold us to the agreement,” said Board Member Ophelia Wright to the school board. “That is my charge to each and every one of us sitting here.”

In the agreements, RCS agrees to continue to provide transportation services using state-approved buses and will be reimbursed by the North Carolina Department of Public Instruction for all such transportation expenses.

Additionally, nutrition services will remain under RCS authority with the district continuing to oversee, execute and administer all aspects of the nutrition program

RCS will facilitate and collaborate with UNCG on student recruitment.

As a partnership lab school, Moss Street will operate as a magnet rather than using an attendance zone.

This means that current Moss Street students would need to enroll in order to attend the Moss Street Partnership School. Moss Street, however, would also be open to students currently attending low-performing schools or students who failed to meet expected growth in the previous year.

Enrollment forms will go home with all Moss Street students from Kindergarten to 4th grade on Tuesday, Shotwell said.

This form will allow families to enroll all eligible children at once, and once enrolled children remain enrolled for the rest of their elementary school experience.

UNCG hopes to have the school near capacity, which is set at 420 students, by the end of April or early May.

In the agreement, both parties acknowledged that sharing training and professional development information is in their best interest from time to time

Further, Shotwell expects that UNCG will become a more active member of the RCS family.

“All of our schools in Rockingham County are going to benefit from this because there will be opportunities to do innovative programs and things at some of our other schools, and they have the resources,” Shotwell said. “Many of you all have asked in the past, what about a grant writer? That's one of the things they can do for us.”

Already UNCG has reached out to Reidsville Middle School and Reidsville High School for collaboration, and RCS is in discussion with UNCG and North Carolina A&T State University regarding the New Vision-Dillard merged elementary school in Madison, according to Shotwell.

RCS agrees to lease UNCG the furniture, the school library, current classroom technology and textbooks and instructional materials at $55,000 a year and the physical property for $5,000 a year.

UNCG agreed to contract with RCS for maintenance, reimbursing up to $35,000 of work after which costs fall to the school district.

The physical lease agreement for the facility is a three-year agreement lasting until June 30, 2021 with an option to renew for two more years. The agreement may, however, be terminated early or extended.

Either party can modify or terminate the agreement immediately — temporarily or permanently — as long as it does not prevent the other party from providing students with legally-required educational services or increase operation costs for the other party.

Both parties can also agree in writing to revise or amend the agreement to remove or add services.

ECU’s school is three classrooms within an elementary school. WCU’s is 50 middle school students within a high school. Moss Street will be the first full laboratory school in the state.

Appalachian State University and UNC-Wilmington both plan to open lab schools this year.

Four others will open in fall 2019, bringing the state total to nine.

The public has spoken, and now the superintendent and UNC-Greensboro will move on to seek school board approval for a UNCG-run laboratory school at Moss Street Elementary.

REIDSVILLE — Signatures are rolling in to sign up families for the Moss Street Partnership School.