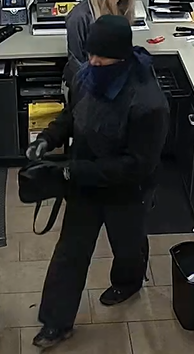 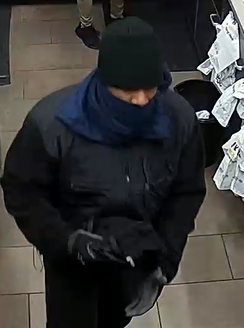 The Reidsville Police Department is offering up to $1.500 for information on the man who robbed Love’s Travel Stop Tuesday.

The Reidsville Police Department is offering up to $1.500 for information on the man who robbed Love’s Travel Stop Tuesday.

REIDSVILLE — For the third time in less than a month, a masked man pulled off a heist at Love’s Travel Stop on Barnes Street — this time, just before dawn on Tuesday.

And police on Wednesday said the culprit may indeed be the suspect they’re seeking in two previous Love’s heists and a recent Quick Mart robbery here. The Reidsville Police Department is offering up to $1,500 for information leading to an arrest.

In all of the crimes, the suspect wears dark pants, jacket, toboggan and a face mask and demands money from clerks without brandishing a weapon, according to RPD press releases.

In all four crimes, the suspect fled the seen before police arrived, getting away with undisclosed sums.

Police, who had reviewed Love’s security camera footage of the culprit, previously said they were unsure about whether the same suspect was involved in the first three cases.

Anyone with information regarding the investigation should call RPD Sgt. Hatfield at 336-347-2335.

Those who wish to remain anonymous, may leave tips with Rockingham County Crime Stoppers at 336-349-9683.