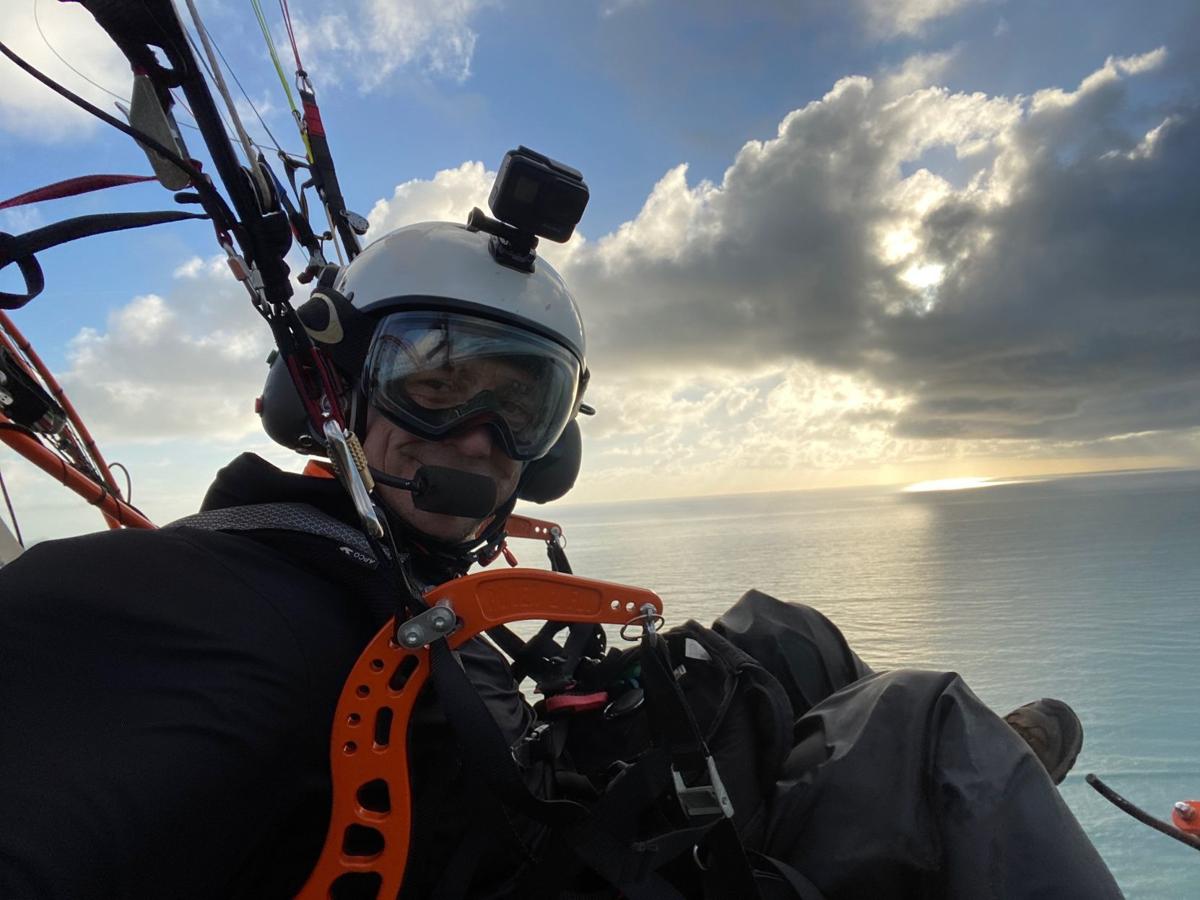 Flying buddies James and Scott do a “wing touch” in middair with their powered paragliders. 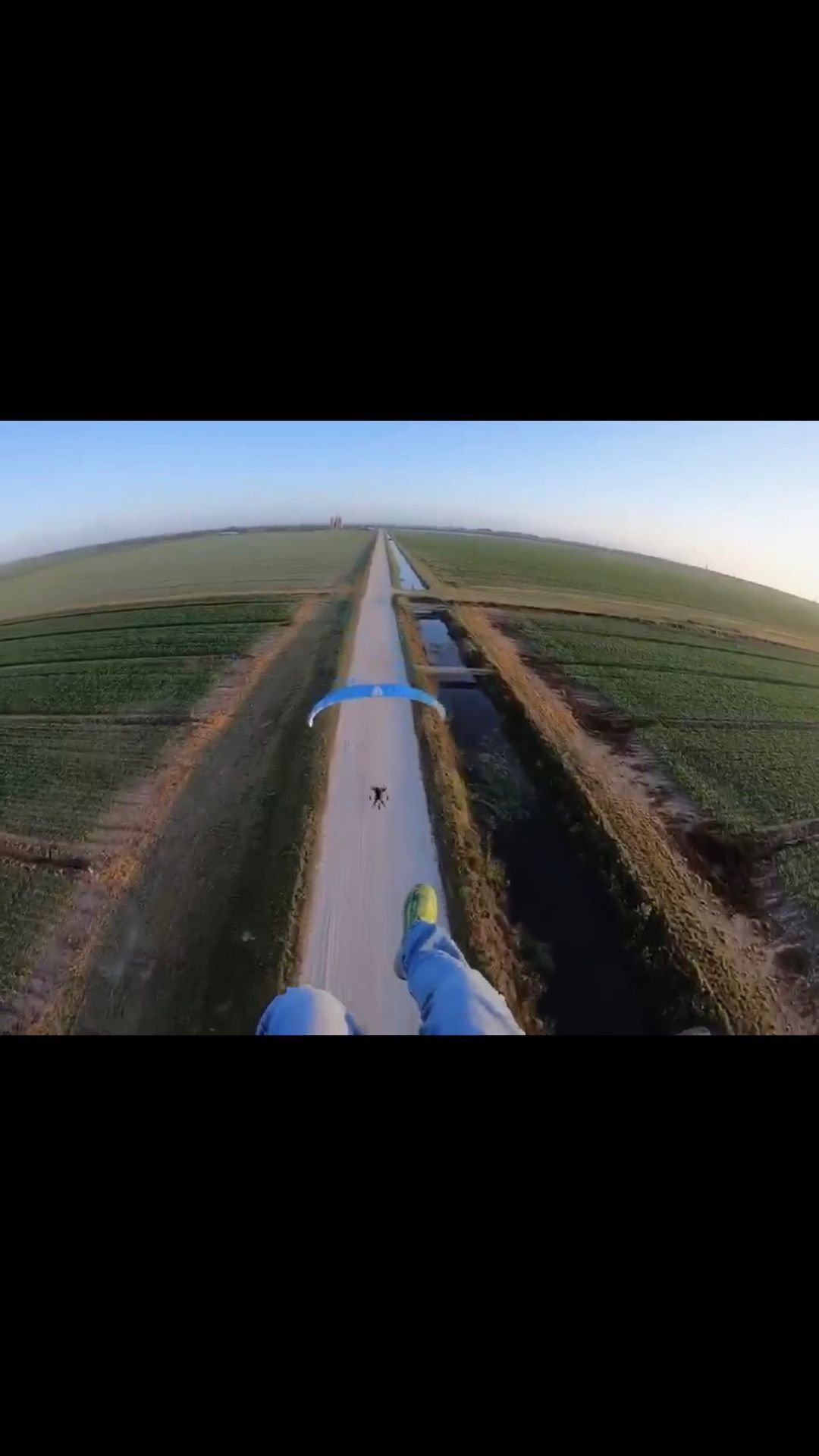 View from on high. James Sutherland peers down at the Rockingham County landscape from his powered paraglider.

Flying buddies James and Scott do a “wing touch” in middair with their powered paragliders.

View from on high. James Sutherland peers down at the Rockingham County landscape from his powered paraglider.

“Up, down, flying around,

looping the loop and defying the ground.

They’re all frightfully keen, those magnificent men in their flying machines’’

— theme song from the 1965 film, “Those Magnificent Men in their Flying Machines.’’

MADISON — If you have ever met a Sutherland, you will find them to be quick-witted, charming, innovative and highly intelligent. There’s a certain gleam in their eyes that assures one almost immediately that you’ll soon be engaged in a good story or two.

The second oldest son of Charlie Sutherland is James Richard Daniel Sutherland. The 42-year-old epitomizes these Sutherland characteristics. Good natured, bright and sensitive, James is a co-owner of his father’s empire, Charlie’s Soap, along with his three siblings. His job as vice president of the International Sales Division has Sutherland handling umpteen industrial accounts and private sales.

For the last decade, and with tremendous ingenuity, James and his brothers have catapulted sales of Charlie’s Soap to consistently rank number one in detergent sales on Amazon.

If there is a challenge before him, James meets it.

He says he lives by a business quote which sits front and center, framed on his desk and likens a good businessman to a railroad conductor.

James says the conductor doesn’t drive the engine, doesn’t blow the whistle, and doesn’t change or grease the wheels, but if the whole train gets off track, the conductor knows he holds responsibility for the derailment.

Knowing how all these parts work collectively and making sure they are working efficiently are the keys to avoiding a derailment, he said.

And the younger Sutherland doesn’t sweat the small stuff.

His coworkers often question what he calls his enthusiasm for “contention.” But James explains that he believes there is always something to be learned when two things are in contention.

In fact, he relishes ups and downs and believes that life is not real unless there is such contradiction.

Life’s failures and successes have taught him the perspective, and James incorporates the benefits of both into his work, daily life and his passion — navigating the skies in his gas-powered paraglider.

Instead of reading bedtime stories to young James, his chemist/inventor dad regaled him and his brothers with stories of his flying adventures and escapades while a U.S. Navy pilot.

Ultimately, some of his so-called “exciting stunts” got Charlie demoted.

But they instilled in James an appetite for flight. By age 8, James knew how to fly a single engine aircraft. He wanted nothing more than for his father to put him in the co-pilot’s seat and let him trim the wings. Single engine plane

Instead, his dad did what to James was the “unthinkable,’’ and tapped his younger brother Morgan for the first go at steering the craft from the coveted seat.

Morgan was carefree and not really that interested in airplanes, but James was super serious about flying and had already decided he would try to attend the U.S. Naval Academy and learn to fly fighter jets.

What really shocked him was when his dad yelled over the engine, “Hey, Morgan, just yank on the stick,’’ yielding the plane’s controls. Trembling, James recalls, Morgan yanked on the plane’s yoke, and sent the plane lurching forward. James felt weightless. He saw his young life flash before him with freezing fear, for he didn’t realize the power his father had to quickly correct Morgan’s error.

That episode gave James his first taste of in-flight terror.

Then came the stories throughout childhood about the near-fatal crash his grandparents survived in the early 1970s as passengers in a four-seater.

Loggers found the Sutherland couple amid the wreckage in Washington State’s Olympic State Park. They had lived through a tragedy that claimed the lives of their pilot and his wife.

Still a child, James was developing a flying phobia that would follow him into adulthood.

The very thought of going up was debilitating, he recalled. Flying commercial for work meant sedating himself to get through trips, then reserving a recovery day to shake off the stress. He would experience mini panic attacks with sweaty hands and heart palpitations during flights, he said. And until five years ago, he would not fly alone.

Three to four days after his close friend Scott Watford crashed his powered paraglider in an accident that nearly left him paralyzed, James decided he had to address his fear … a kind of contention in his spirit, he said.

Through in-depth research and a keen eye for precision, James set out to understand exactly what had happened to cause Watford’s crash.

His study of the situation revealed equipment failure to be the culprit, yet Watford’s craft of choice was proven to be the safest type of craft to fly.

To his surprise, Watford encouraged James to pursue his revitalized dreams of flying. And James was determined. By early 2016, he enrolled in a powered paragliding school in coastal New Bern, N.C.

To date, he insists his first flight adjacent to the Neuse River is still his most exhilarating and emotional.

Recalling it through tears, James recounts the day when his dad watched him fly and his panic dissolved into what he refers to as “Hindu Cow Calm.’’

“You know Hindus don’t eat red meat,’’ Sutherland said. “Think about it. The cows have not a care in the world because they are holy.” During his first solo, he reached 378 feet, and upon landing, heard his beaming father exclaim, “So you’re finally an aviator!”

For James, the process of flying is very scientific and preparation is appropriately handled with the utmost care and detail.

His normal routine is to go out into a field with his wing and motor. Unlike basic paragliding, power paragliding can be done without wind and thermals to create lift. A motor, James explains, allows him to create his own wind power, and through the paraglider’s motorized pulleys, it allows him to control his flight.

James stretches out his wings like a kite and then pulls on the strings.

With the motor rolling and the use of a trike, his style of paragliding requires very little physical force, he noted.

Once airborne, James almost always has tunes rolling, too. He said he likes his music best on shuffle, and claims songs played at random often dictate his flight pattern and style.

In flight, James says he is further freed of worry about what’s next. The future is not a priority with so many things to get right in the moment … checking that the motor is running and the wings are working.

As carefree as he characterizes his flying, it’s not been without a few seriously close calls, he admitted.

After his 16th flight, James decided to purchase a brand new motor. Handy as he is, James builds his own motor supports and always calls on a second pair of eyes to confirm safety and security measures.

Adrenaline rushing, James realized he had accidentally hit his kill switch. To save himself, he threw his shoulder out of joint restarting the motor, then forced his shoulder back into place to end excruciating pain.

His greatest fear remains being alone somewhere following a flight malfunction without discovery for hours, he divulged.

Such is the oft-heard exclamation of little ones around Rockingham County who witness James flying high above them.

In fact, James so loves enthralling youngsters with his flying stunts, he often dips down on golf courses and makes loops over parks for the gleeful cheers of children below. Lucky kids may even catch toy paratroopers James launches for their delight. These small novelties sum up the childlike wonder James seems to experience on each flight.

Many folks on the western side of the county have watched in awe and with a few chills, the wonder of his art.

He’s the county’s answer to the famed “ magnificent man with the flying machine.’’ His craft is his life’s joy, and in many ways, James sees it as an opportunity to share joy with a vast audience below.

A studio art major in college, James believes flying is the highest form of art.

He speaks with great humility of hovering above homes of beloved friends and neighbors who often come out to greet him.

Flying for him is the real deal.

And he says he feels as though God gifts him with an opportunity to spread good thoughts and prayers to those who take the time to look up and wave.

“Everything you can think of flying is so good and true,’’ he said, explaining he never wants to lose the exhilaration it brings … the way it reinforces the innocence of his youth. “You just want to conscientiously fly over familiar friends and homes and cry. I hope I never get used to it.”

James doesn’t linger long on these thoughts. Instead, he describes his new van, which he calls his “paracamper’’ — the vehicle he hopes to soon drive to Moab, Utah for a launch at Arches National Park one day soon.

The flight through the park’s Corona Arch is a rite of passage for many power paragliders and a feat he wants to accomplish.

Some other dreams include offering tandem paragliding rides and making overseas flights.

James’s father — his inspiration and hero — is always close in his thoughts as he flies, he noted.

And things have come full circle in many ways. While he is now willing to take the same risks he did as a child, the mature James is more serious about doing due diligence regarding pre-flight safety.

Does he feed on the thrills?

“Nah, not an “adrenaline junkie,” but a “calm junkie,’’ really,’’ he said of his personality. “What you are looking for is that moment when the adrenaline is not pumping anymore ... when you can take off with ease and look ahead at the joy that awaits.”

May we all have such eyes to see beauty during these trying times. No matter what our perspective.

Lindsay Barham Moore Morris is a free-lance writer and mother of daughters, Millie and Lucy. She was a longtime assistant to the late U.S. Rep. Howard Coble.