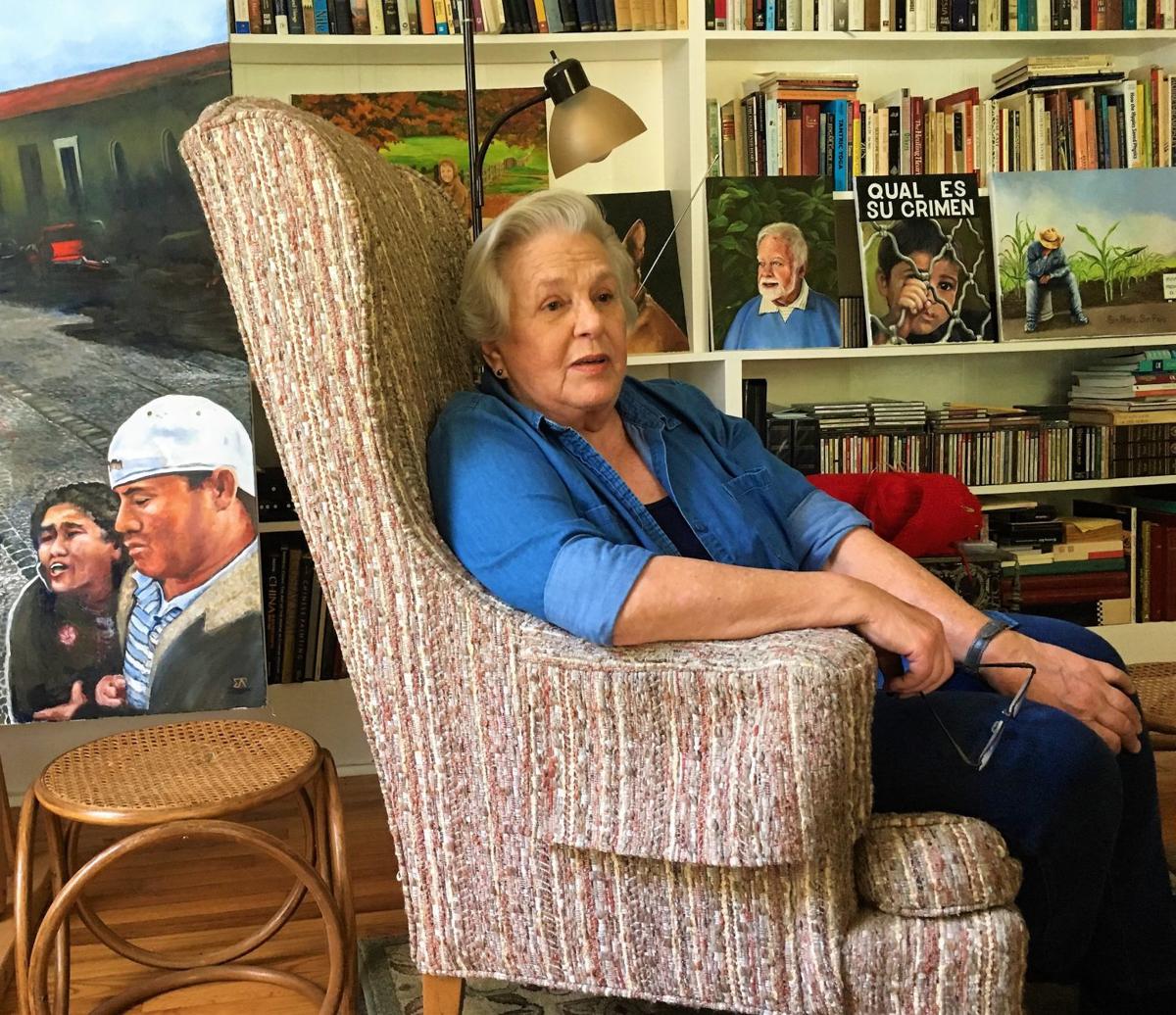 Sonya Lindblom-Gressel in her living room in Madison where she works each morning to chronicle the lives of immigrants in crisis through her paintings. 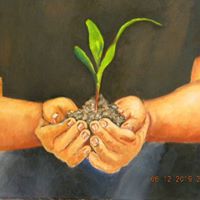 Lindblom-Gressel's paintings chronicle the struggles of immigrants to travel to the United States and resettle.

Sonya Lindblom-Gressel in her living room in Madison where she works each morning to chronicle the lives of immigrants in crisis through her paintings.

Lindblom-Gressel's paintings chronicle the struggles of immigrants to travel to the United States and resettle.

MADISON — For most of her life, Sonya Lindblom-Gressel has been between her stable and her easel.

At 82, the former horse trainer and dressage aficionado is busy most mornings by the south window of her living room, building with brushstrokes a bridge to her activist life.

Some 30 canvasses make up her collection of arresting portraits of immigrants. The works tell stories of violent struggles in their homelands and the fight to find refuge in the United States.

There is tension between beauty and despair in Lindblom-Gressel’s work.

In one rendering with a rich terracotta backdrop, “Mother’s Day at The Border Wall,’’ a mother and father sit stoic with weary small children. Another portrait depicts a bewildered young boy with fingers laced through cyclone fencing at a detention center gate.

Social justice is central to the artist’s life, and Lindblom-Gressel works diligently to educate herself, her friends and those in need of a welcoming hand.

Before dawn, she’s busy synthesizing political news of the day and composing a daily blog for her wide circle of friends to read on Facebook. Built-in bookshelves make up an extensive personal library to feed Lindblom-Gressel’s undeniable curiosity.

After launching her blog, she prepares oil paints, mixing hues in a process she learned decades ago called the Double Complement Method. “It’s sort of like having all the keys on a piano,’’ Lindblom-Gressel says with a smile. “I feel like my palette is naked if I don’t mix up the whole value range.’’

That “range” refers to the respective coolness and warmth of colors. And through precision with hues and tones, an artist can best tell a story.

Lindblom-Gressel makes similarly artful choices with her vocabulary, spinning out synopses of her life’s chapters with lively language and delight.

Compassion colors her personality and acts. The granddaughter of Swedish immigrants says she feels an acute understanding of immigrants’ hope of building a life in the United States.

“All of my grandparents were Swedish immigrants, so I have a connection to the people who immigrate,’’ she said during a recent interview from her cozy living room.

Fleeing the Swedish potato famine and social unrest, most of Lindblom-Gressel’s kin made their way to the U.S. between 1880 and 1920, along with about one-third of Sweden’s population, in fact.

As teenagers, her grandparents settled in the northeast. Born into a strong Swedish-American community in New Jersey, Lindblom-Gressel and her family spent a few years in Connecticut before moving South when she was in third grade.

An accountant, Lindblom-Gressel’s father took a job in finance with a Spartanburg, South Carolina, textile mill during the 1940s, and his only child learned the new life of a Southerner. “That was culture shock,’’ Lindblom-Gressel said, chuckling.

Her mother, Gertrude, was a farm girl from Pennsylvania, and Lindblom-Gressel’s father, Andrew, made his mark in accountancy as an auditor for top national firm Arthur Andersen in New York.

Smiling at the memory, Lindblom-Gressel described a loving father who brought back exotic Latin dance steps to teach her from his trips to Cuba and Puerto Rico to audit sugar cane plantations.

Two years after the move to Spartanburg, Lindblom-Gressel’s mother succumbed to tuberculosis.

Her paternal grandmother, an aunt and a stepmother would patch the loss somewhat, but by age 15, Lindblom-Gressel grew frustrated with her stepmother’s racist views and left home.

By 17, she had married and given birth to a daughter Roxanne. But by 20, Lindblom-Gressel returned home to enter Converse College and study art.

Passionate about learning realism, Lindblom-Gressel said she was lucky to have found a top realist instructor as a mentor at the college.

Remarriage would bring a son, Adam. Then a move to North Carolina in the 1970s, and a stint as a Girl Scout leader would deliver Lindblom-Gressel to equestrian life.

“I had a scout troop and they wanted to learn how to ride horses,’’ she said of the catalyst to seek instruction from legendary Sedgefield Farms trainers, the Bryson Family.

Lindblom-Gressel struck a deal with the Brysons, who gave her lessons twice weekly and facilitated affordable scouts’ lessons. “They taught me how to ride and how to jump, and I was able to teach the girls.’’

A natural, Lindblom-Gressel was quickly groomed by the Brysons to evaluate horses. She accompanied the experts on numerous buying trips to study the saddle bred set, eventually becoming a trainer.

Her reputation grew nationally as a particularly gifted rehabilitator of horses, and top stables often sent her multiple animals to build back into show competitors.

Horse life would blend with Lindblom-Gressel’s art life, too, as she learned to goldsmith and make equestrian-themed charm bracelets and brooches for the stable set.

She also spent several years during the 1970s helping Vietnamese refugees resettle in Guilford County, an experience that informs her politics and work today.

By around 2001, Lindblom-Gressel found herself back in the barn.

Daughter Roxanne Griffin bought a horse farm in Stokesdale around that time and invited Lindblom-Gressel to join in coaching riders and training thoroughbreds, including the Lipizzaner breed.

But a meeting with the love of her life around 2004 would see the artist leave horse life and take up world travel.

Lindblom-Gressel and Alan Gressel tied the knot and looped around the globe three times, then traveled the Pacific Rim and the Mediterranean Rim. The couple enjoyed five years together before Alan died from cancer.

Since then, Lindblom-Gressel and her daughter have sold the Stokesdale farm and made a home on the west side of Madison where Griffin helps garden and spends time working in politics as head of the Rockingham County Democratic Party.

Lindblom-Gressel, whose lawn is regularly studded with the campaign signs of Democratic candidates, keeps her hand and voice in politics, too, helping out at the polls and campaigning door to door during elections.

She also takes time to build friendships with members of the county’s Hispanic community by attending a Latino fundamentalist church where she helps teach women about the political process and aids with translation.

Most importantly, though, Lindblom-Gressel returns daily to her easel to tell the immigrants’ stories.

“What am I gonna do next? I look around at all the faces in the church. I could do a portrait of every one of these people and it would be fascinating,’’ said Lindblom-Gressel. “All of their stories. Maybe that’s what I will do next.’’