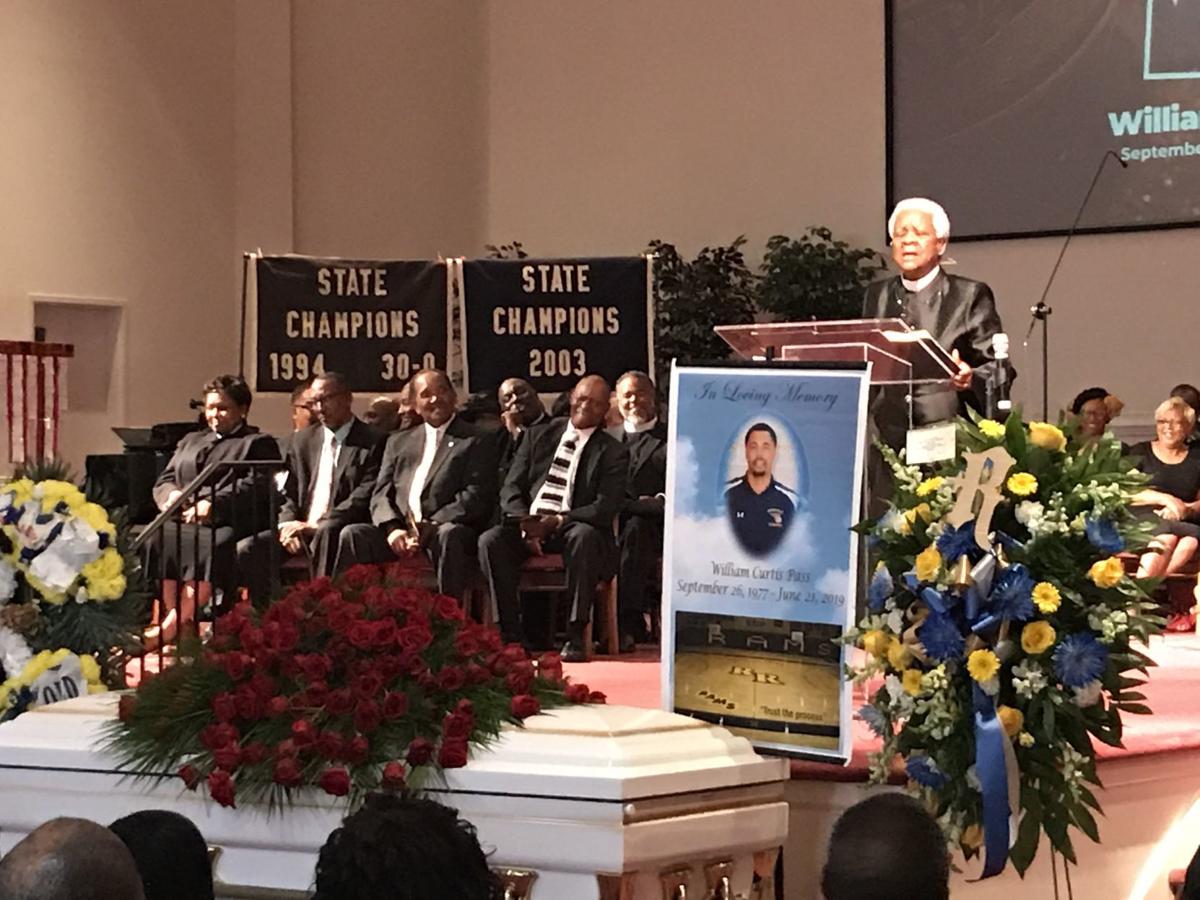 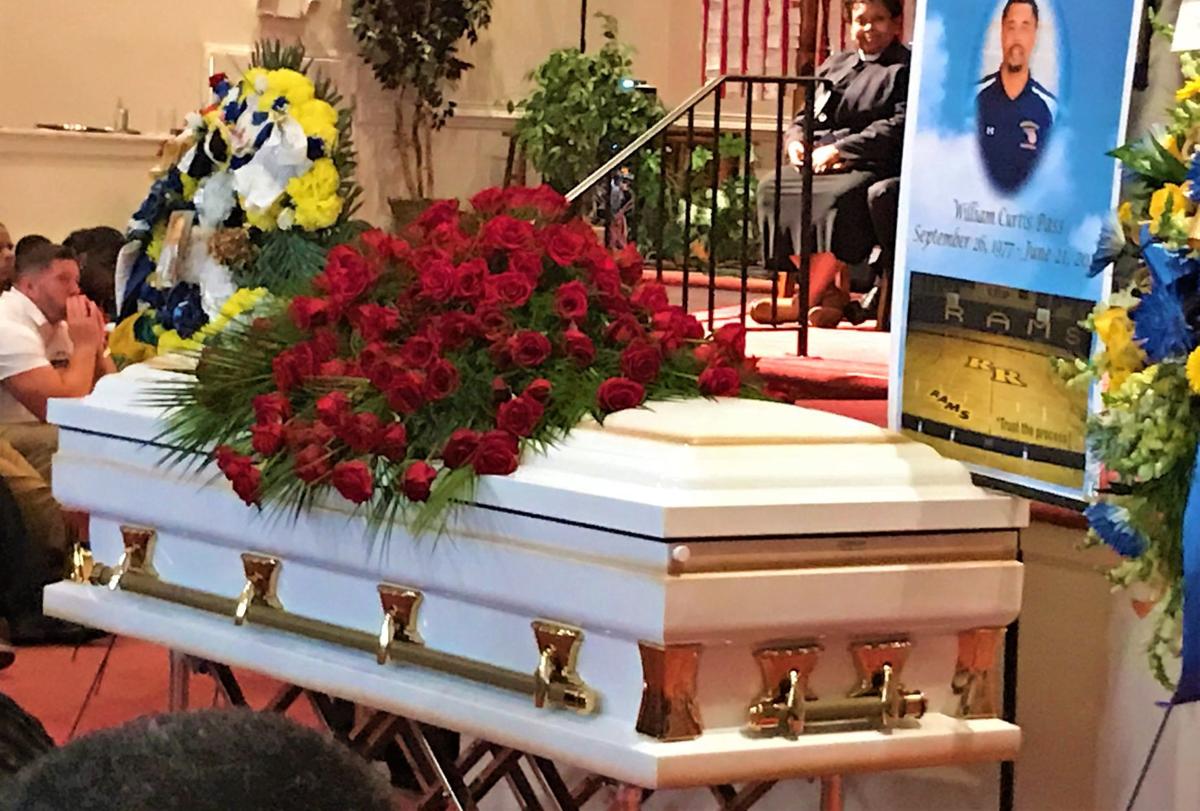 RHS coach Curtis Pass was laid to rest on Wednesday after a funeral at Covington Wesleyan Memorial Church that drew close to 1,000 mourners. 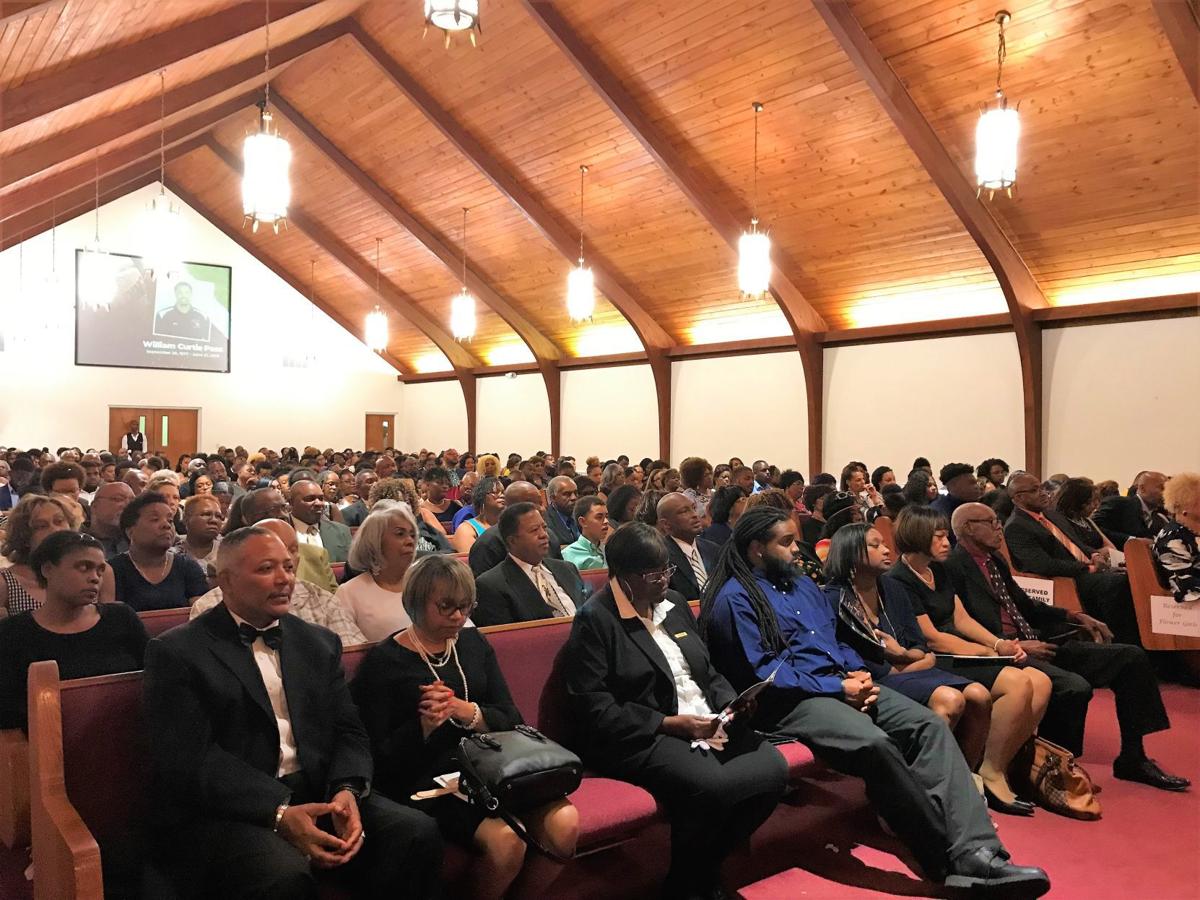 RHS coach Curtis Pass was laid to rest on Wednesday after a funeral at Covington Wesleyan Memorial Church that drew close to 1,000 mourners.

REIDSVILLE — Some athletes and coaches measure success by the stats, but Curtis Pass’s playbook was all about counting friendships.

A crowd of close to 1,000 friends, family, students and colleagues filled the sanctuary and gymnasium at Covington Memorial Wesleyan Church Wednesday afternoon for the funeral of the popular Reidsville High School coach.

Outnumbering church parking spaces, guests lined their cars along the roadside of a half-mile stretch of Vance Street Extension in order to pay tribute to Pass, 41.

Several hundred watched the service on television screens in the gym’s spillover set-up, and during lulls in the three-hour requiem, groups of students, teammates, and co-workers gathered on the church lawn to share memories of Pass.

“This is a home-going celebration. The spirit of the Lord is here,’’ said the Rev. Kenneth N. Moore as he welcomed guests to an upbeat celebration of Pass’s life.

Eulogists spoke of Pass’s contributions to the community, with family, clergy and members of Pass’s boys varsity basketball team paying tribute to the man they called a father-figure.

Tina Herbin shared a letter of sympathy written to the Pass Family by an RHS student: “ ‘Coach Pass was more than just a coach. He was a mentor, on and off the track … He was one of the greatest men I’ve ever known. He treated everyone with respect, but most importantly, he treated everyone like family … He was truly selfless. He was always there to offer a helping hand. I owe Coach Pass a lot. Without him, I don’t know where I’d be.’ ’’

Pass, who worked a third-shift manufacturing job, juggled coaching the RHS varsity boy’s basketball team, as well as track and cross-country teams. He also found time to teach driver’s education and fill in as a part-time bus driver for his school.

While he sought excellence from his athletes on the court and field, he pressed them just as hard to triumph in academics.

Players and runners said that push paid off and inspired them to be better students. Indeed, the county school system recently recognized Pass’s basketball and cross-country teams for their stellar collective grade point averages.

A longtime friend and basketball team chaplain, Dan Stephens told the crowd  Pass was “beaming” during a recent basketball season when he realized all of his players had earned scholarships to college.

“I don’t think in my life I have ever seen a person who has been more dedicated to pouring into the lives of other people,’’ Steves said of Pass’s generosity. “It was what completely motivated that man. He was never selfish about anything. He made everybody happy. It’s a testament by the sheer number of people that are in this room … the number of lives he touched … because he was always thinking about other people.’’

“He was the guy that every time you’d see him, he would make you feel special,’’ Massey said, describing how Pass navigated the aisles of Wal-Mart, the grocery store or the gym, greeting friends. “When he’d see you, he’d make eye contact and make you feel like you were the only person there. He was that kind of guy.’’

A 1995 RHS graduate, the 6-foot-4 Pass was an All-Conference star for the Rams during his teens and took the job as head basketball coach for his alma mater in 2016.

Pass played basketball for Old Dominion University in Norfolk, Virginia, and later transferred to the University of West Georgia, where he earned a place in the Wolves Basketball Hall of Fame.

The standout went on to join a European travel team and a summer pro league in Los Angeles before entering the coaching ranks some 14 years back.

Dynamic Bishop Felecia G. Kellam offered a eulogy for Pass that had mourner’s responding to her calls for praise. With an enlarged photograph of the coach displayed near the pulpit, Kellam lauded Pass for his hard work and commitment to his faith and teams.

Member’s of Pass’s 1995 RHS graduating class also were on hand to announce a gift in Pass’s honor to the RHS boy’s varsity basketball team.

A friend of Pass since sixth grade, Class of 1995 President Krystal Dillard praised his leadership. “I thank God for who he is. I thank God for all that he has done.’’

REIDSVILLE — Saying goodbye to basketball Coach Curtis Pass is much like losing a dad, the b…