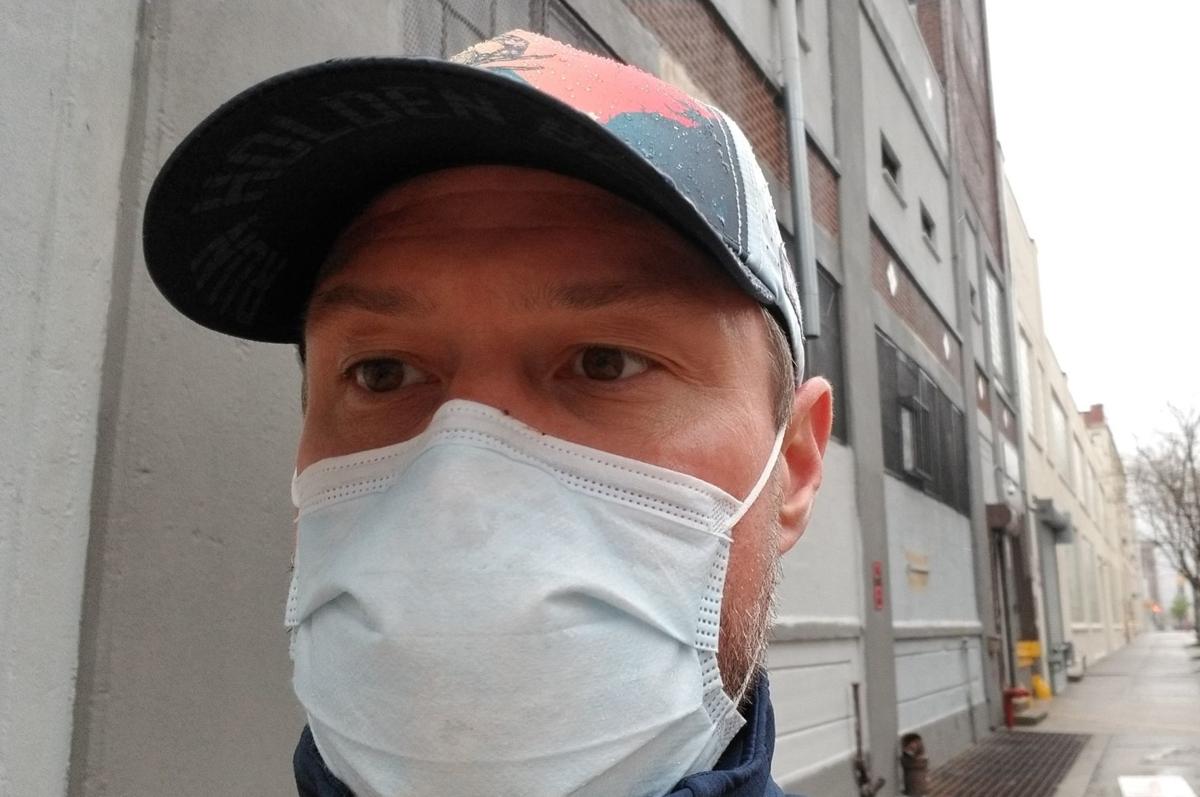 Jason Vaughn made a solo trip to the COVID-19 hot zone, New York City, in mid-April, where he prepared meals for front line medical staff in hard-hit Queens. 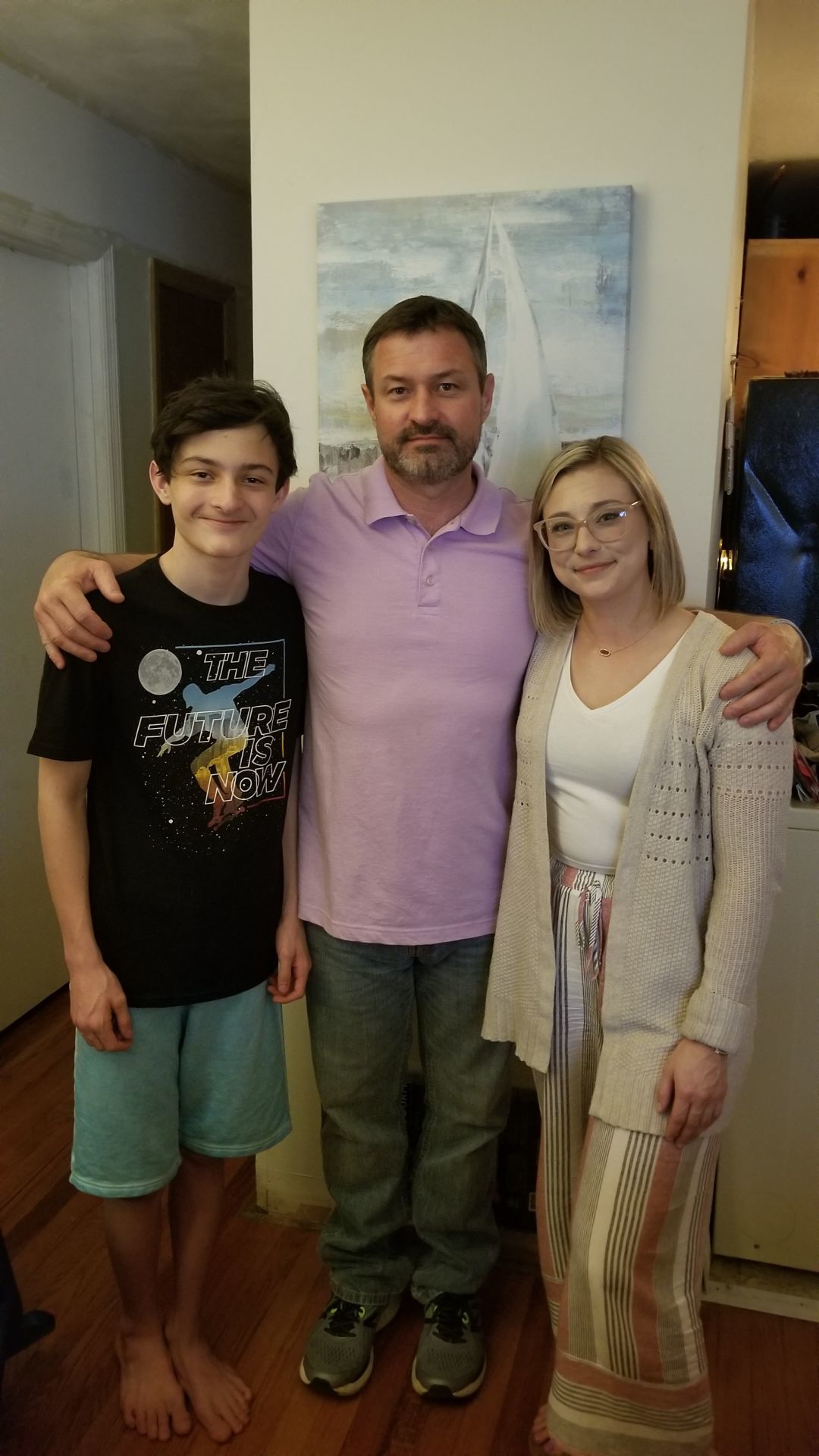 Jason Vaughn in his Long Island hotel room between shifts for the Queens Feeds initiative to provide meals to health care workers at the borough’s Elmhurst and Mount Sinai hospitals. 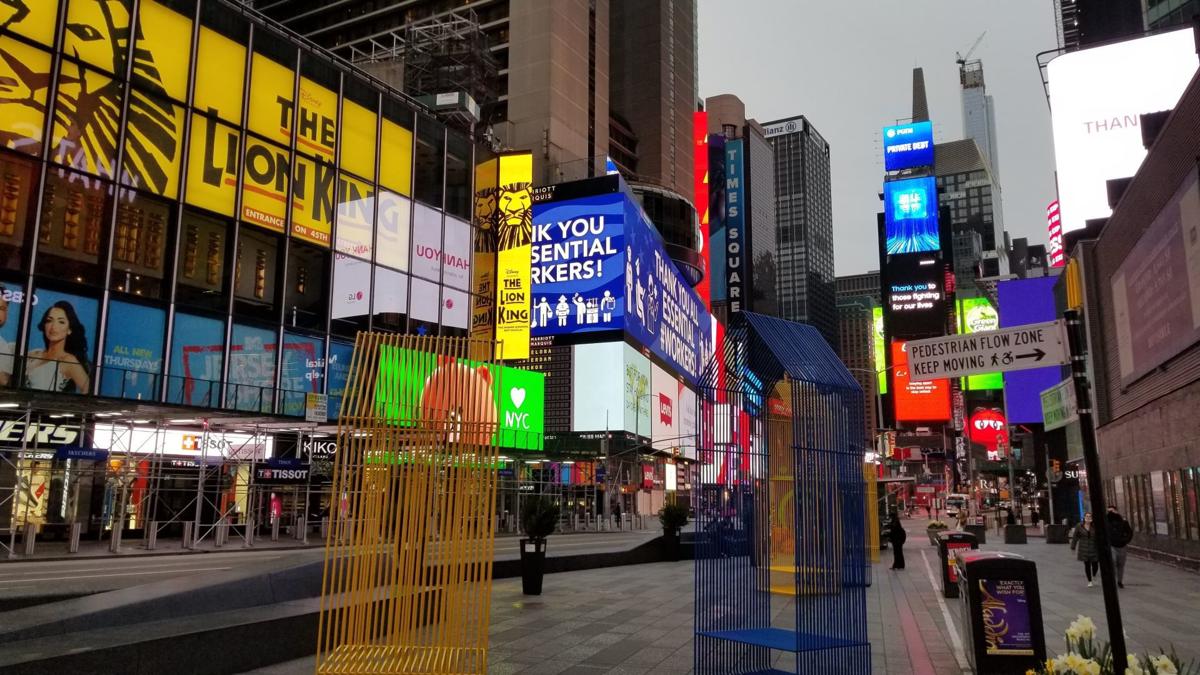 Times Square was silent during Vaughn’s mid-April visit to NYC where COVID-19 has killed thousands.

Jason Vaughn made a solo trip to the COVID-19 hot zone, New York City, in mid-April, where he prepared meals for front line medical staff in hard-hit Queens.

Jason Vaughn in his Long Island hotel room between shifts for the Queens Feeds initiative to provide meals to health care workers at the borough’s Elmhurst and Mount Sinai hospitals.

Times Square was silent during Vaughn’s mid-April visit to NYC where COVID-19 has killed thousands.

EDEN — Jason Vaughn’s curiosity transcends the kind of fear that cripples most of us.

On Wednesday evening, he pulled up his blood work results.

After his recent five-day trip to provide aid in NYC — the globe’s hottest zone for COVID-19 — Vaughn, 46, had tested negative for the often lethal respiratory virus.

Well known for his role as a key health care provider at the city’s James Austin Health Clinic, Vaughn has long had the constitution for dealing with chaos calmly.

“I come from an emergency medicine background,’’ said Vaughn. “My original idea was to go to New York and work as a nurse practitioner or an RN as a front line person.’’

But his administrators at Caswell Family Medical Clinic, which administrates JAHC, encouraged Vaughn to find a less risky way to help.

And Vaughn knew just who to call — a friend in New York City helping organize meals for medical staff at stressed hospitals in Queens, the Big Apple’s hardest-hit borough.

It would be a chance for Vaughn to give direct support to his fellow health care professionals and chronicle the experience to share by video back home, and Caswell Medical was behind him fully. In fact, CEO Billy Crumpton would coin the title for Vaughn’s video journal and help promote it as “Jason’s Journey.’’ Link to the videos at: https://caswellmedical.org/jasons-journey/

In fact, Vaughn’s journey into the major farm-to-table kitchen effort has inspired him to kick off a similar nutrition initiative in Rockingham County. Vaughn’s chief aims: to support farmers while promoting fresh food nutrition, wellness and preventive medicine.

On April 13, the father of 14-year-old son Colton, and emergency room nurse daughter Logan, 25, hopped a jet with a few medical masks and his jogging shoes.

His first trip to New York would be a surreal look at a city turned mute.

On that first day of Vaughn’s trip, the coronavirus had claimed roughly 700 of its people. Times Square was nearly silent, and subway platforms only dotted with essential workers.

Up at 5 a.m. each morning for a five-mile jog, Vaughn was suited up in a chef’s coat and apron by 10 a.m. each morning at the GreenTop kitchen where he wore blisters on his fingers, helping fill thousands upon thousands of meal trays with gourmet entrees and side dishes.

From the kitchen, he and other staff delivered the food to weary staff at hospitals where refrigerated trucks had been brought in to serve as overflow morgues.

“Everybody looked stunned,’’ he said of the people he passed on the street or in the subway. “People were just hurting. Everybody I spoke with knew a person or had a family member or a friend close to them who had died … and not just one, but several who had died.’’

New Yorkers have an acute understanding that social distancing can mean the difference between life and death, Vaughn observed.

“On the subways, if you got near someone, they looked at you and stepped away to maintain that six foot distance.’’

By contrast, folks in Rockingham County haven’t necessarily heeded public health protocols put in place by the state and recommended by the Centers for Disease Control.

But Vaughn notes the grave importance of using masks and staying home, noting that the nation is seeing way higher numbers of cases than most experts anticipated.

“Three weeks ago, I would have said the country would have had 40,000 deaths from this — tops — by August,’’ said Vaughn, who continued treating his regular patients through phone calls and video visits from NYC.

“And now we’re nearing 50,000 deaths. Hot spots are still popping up. And now, by August, I’m thinking it’s gonna be way more deaths than we thought. I don’t even want to think.’’

Resistance to wearing masks and social distancing is dangerous and seems to be driven by political sentiment, Vaughn observed.

Vaughn is a man of science. And with chaos and tragedy he harvests big lessons and inspiration.

In his medical practice, he is frustrated to see scads of low-income patients with preventable illnesses like diabetes and obesity that could be remedied with simple quality nutrition.

And it’s the very kind of farm-to-table sustenance Vaughn saw being ladled up at GreenTop, where green-mindedness and sustainability are watchwords for Lee, a fifth-generation farmer, himself.

“I’m hoping to consult with Josh and bring his ideas to Rockingham County,’’ Vaughn said.

“There’s huge food insecurity in our county and nutrition is one of my main concerns because finding quality food is hard. Our food banks and affordable food is predominantly full of carbs,’’ he said, describing simple carbohydrates that promote poor blood sugar metabolism and obesity.

“It’s really heart-breaking to hear my patients say they don’t have the money (for fresh food). So something I want to get going is victory gardens and farms.’’

To that end, Vaughn will be traveling the county and producing a bi-weekly video blog, or vlog, beginning later this month.

“I’ll try to focus on wellness and preventive medicine and let folks know about resources in their community,’’ said Vaughn, who has creative and tech back up from Ryan Millner, his associate through JAHC.

Millner, who edited and produced Vaughn’s “Jason’s Journey” videos, is marketing and outreach coordinator for the medical group and a farmer himself.

“They’ve really let me spread my wings out and do this,’’ Vaughn said of Caswell Family Medical. “They have a real heart and soul for the community.’’

“From the short time I’ve known him, Jason’s been all about helping others, and it really came to life when he decided to do something like this,’’ said Millner, who will upload a documentary-style video of Vaughn’s full trip next week. “And when he’s got an idea like this in his head, he wants to get people and the community involved.’’