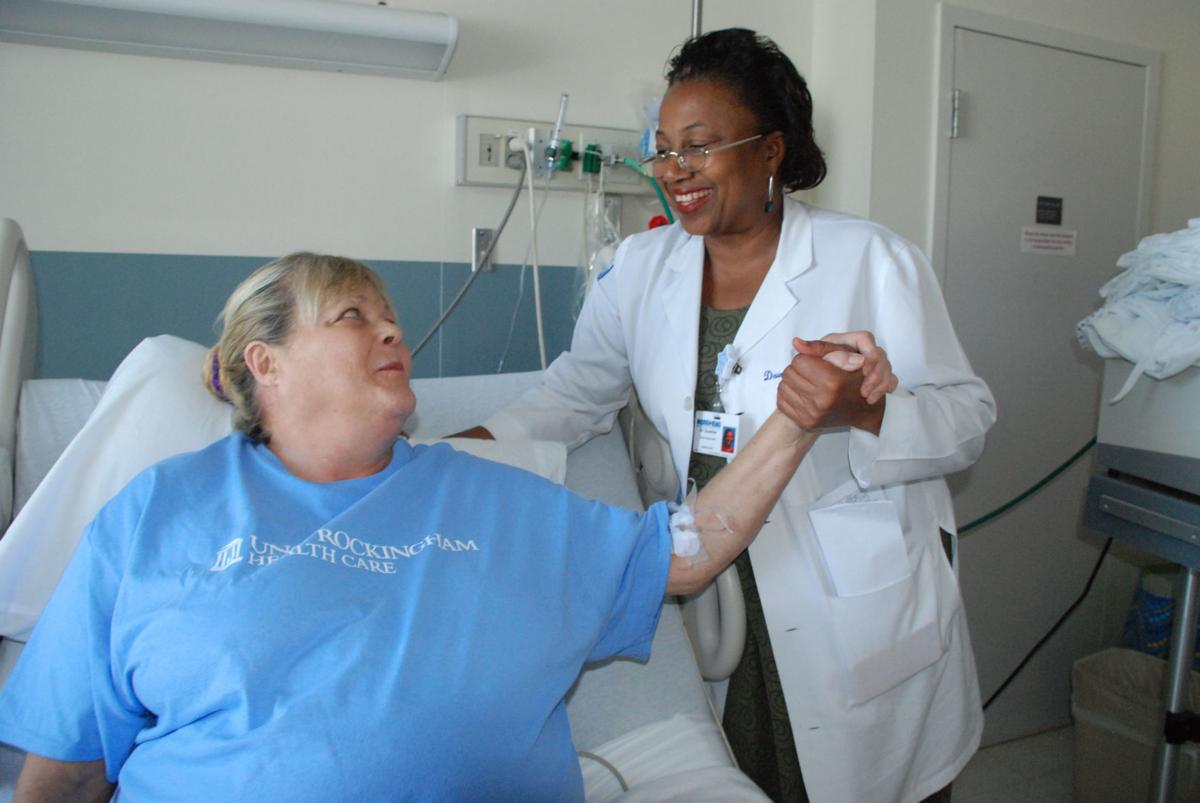 Callie Outlaw (left) is joined by UNC Rockingham hospitalist Dr. Dawn Quashie, one of the physicians who has cared for Outlaw during her stay. 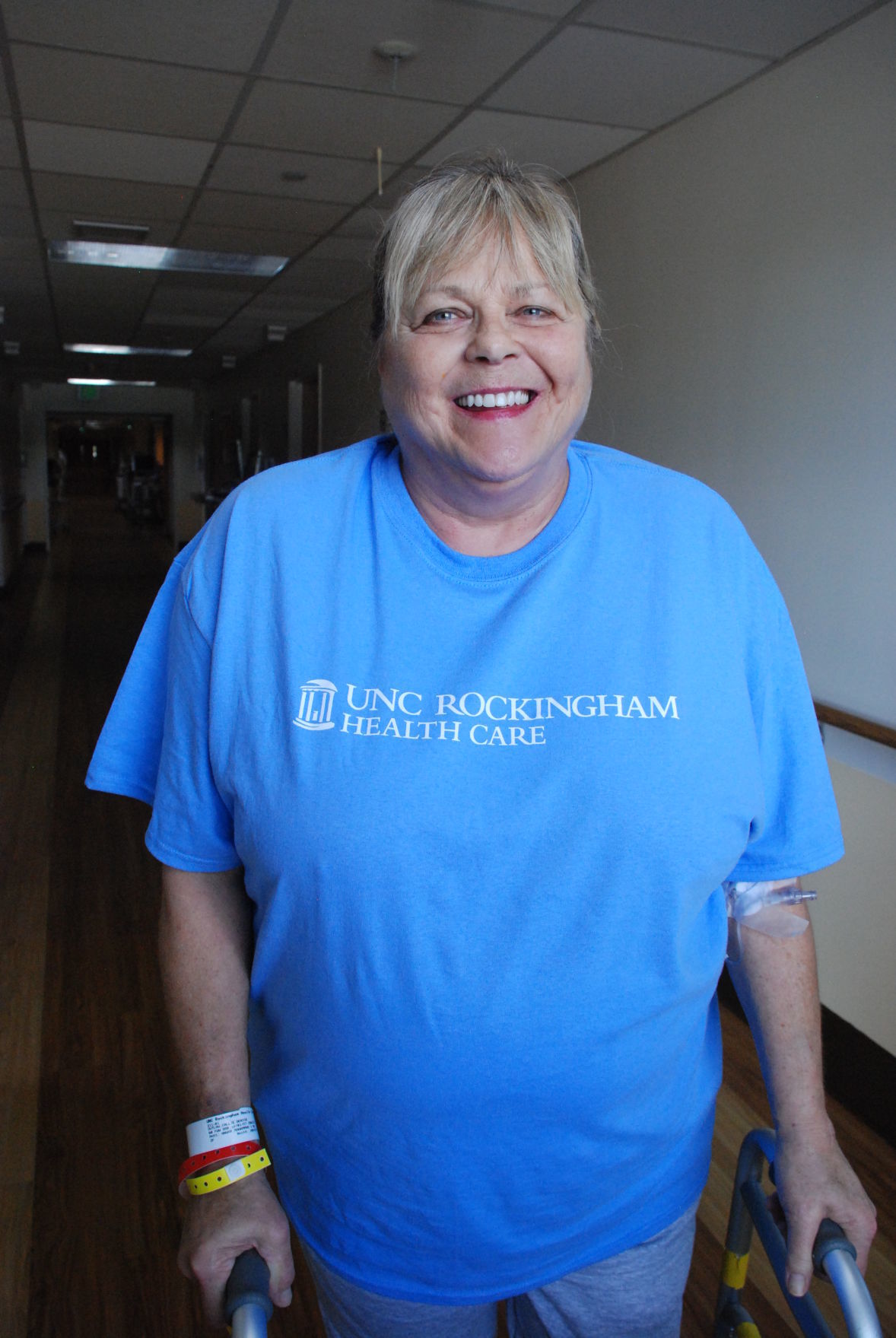 Callie Outlaw was flown by helicopter to UNC Rockingham for care after Florence flooded the coast.

EDEN — It’s not uncommon to see a helicopter swirl over UNC Rockingham Health Care, then drift its way downward to the helipad on the west side of the Eden hospital.

So no one took much notice on Sept. 20 when the UNC chopper landed. Usually, when a helicopter lands at UNC Rockingham, it’s to pick up a patient and transfer them to a larger specialty hospital.

This time was different.

With care, the flight crew lowered Callie Outlaw down the ramp and wheeled her stretcher into UNC Rockingham.

Outlaw may be the first patient ever transferred to UNC Rockingham for care.

Outlaw had made a trek across the state — Wilmington to Eden. It’s 238 miles if traveled by road, but Outlaw was airlifted from New Hanover Regional Medical Center, one of the many patients at the Wilmington hospital who had to evacuated because of Hurricane Florence.

Outlaw’s story began on Labor Day weekend. The 60-year-old had invited some girlfriends to join her for a fun weekend at her family’s vacation home on Topsail Island, a place she’s loved since childhood.

After her father’s death, Outlaw felt strongly that the house should stay in the family and be a place where her five sons, 12 grandchildren and two great-grandchildren could experience the same coastal playground she’d come to love.

On that particular weekend, Outlaw was looking forward to hitting the beach early, but at 4 a.m. she woke up gasping for breath. As her breathing worsened, her friends called 911, and an ambulance took her to a nearby hospital.

Because of the severity of her condition, she was transferred to New Hanover Regional, where she was placed on a critical care unit. As her conditioned worsened, so did the weather. Forecasts had Hurricane Florence headed straight toward Wilmington.

Fortunately, Outlaw started to improve and was moved out of critical care to a room on the fifth floor.

That’s where she weathered the storm, hearing the howling winds, pelting rain and where she worried about her family’s safety, the beach home she loves and her primary residence in Mount Olive. She remembers looking out her fifth floor window and seeing downed trees, limbs and pieces of the hospital roof in the parking lot.

Patient evacuation had not been necessary when the hurricane landed; afterward was another matter. The flooding made it difficult for staff to reach the hospital. Outlaw was placed in a helicopter and taken to UNC Hospitals in Chapel Hill.

The ride gave Outlaw an eagle-eye view at Florence’s damage. “Water, water, water everywhere,” said Outlaw, who saw houses swallowed by the brink, with only rooftops and chimneys visible. Many roadways were submersed.

Once at UNC Hospitals, there was more bad news. Outlaw had developed severe pain in her stomach, and there were no beds available. Physicians suspected she had an issue with her gall bladder and would need surgery, but with no capacity, they needed to find a place that could take Outlaw quickly.

That’s how she ended up back in the helicopter, bound for Eden, a town she’d actually heard of because when she was a teen, one of her friends had moved there.

At UNC Rockingham, Dr. Reginald Cathey removed her gall bladder. Outlaw is improving and making the best of her time in Eden, where she is practically a celebrity as staff members come by to make sure she feels welcomed.

“She’s such a pleasant person, and very positive,” said Edna Wilson, a nurse who works in transition management.

A stream of gifts have arrived, everything from clothes to flip flops. Arriving without any personal belonging, she’s grateful for the gifts.

She’s optimistic even though she’s learned that the home on Topsail is most likely a total loss. She’s been told that her home in Mount Olive is fine, but she’s eager to see it herself. Mount Olive also experienced flooding from the storm.

The news isn’t getting her down. She’s telling her friends and family not to make the trip to Eden until she’s ready to go home. That could be any day now.

In the meantime, she has an adopted family at UNC Rockingham.

“I’m not sure a bigger hospital could have given me the care and special attention I got here,” she said. “They saved my life.”