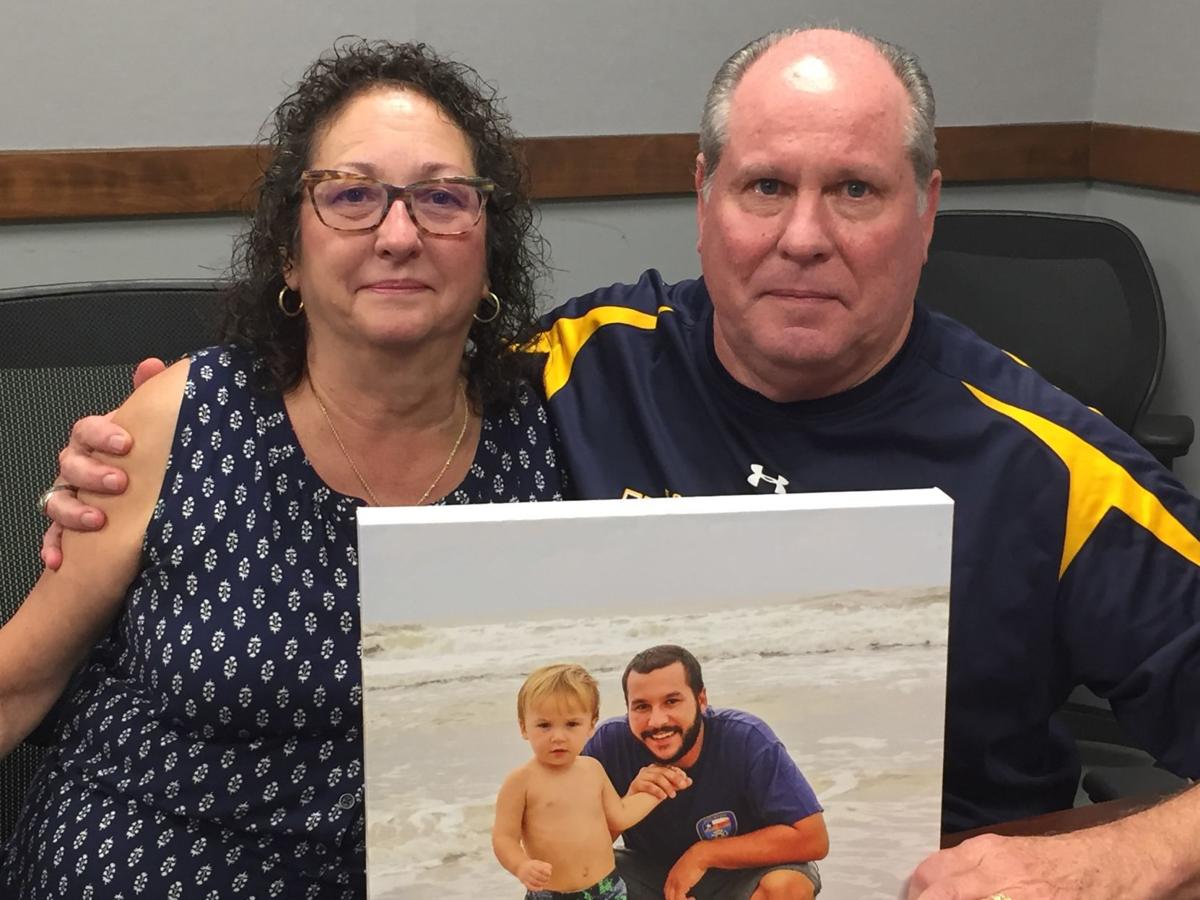 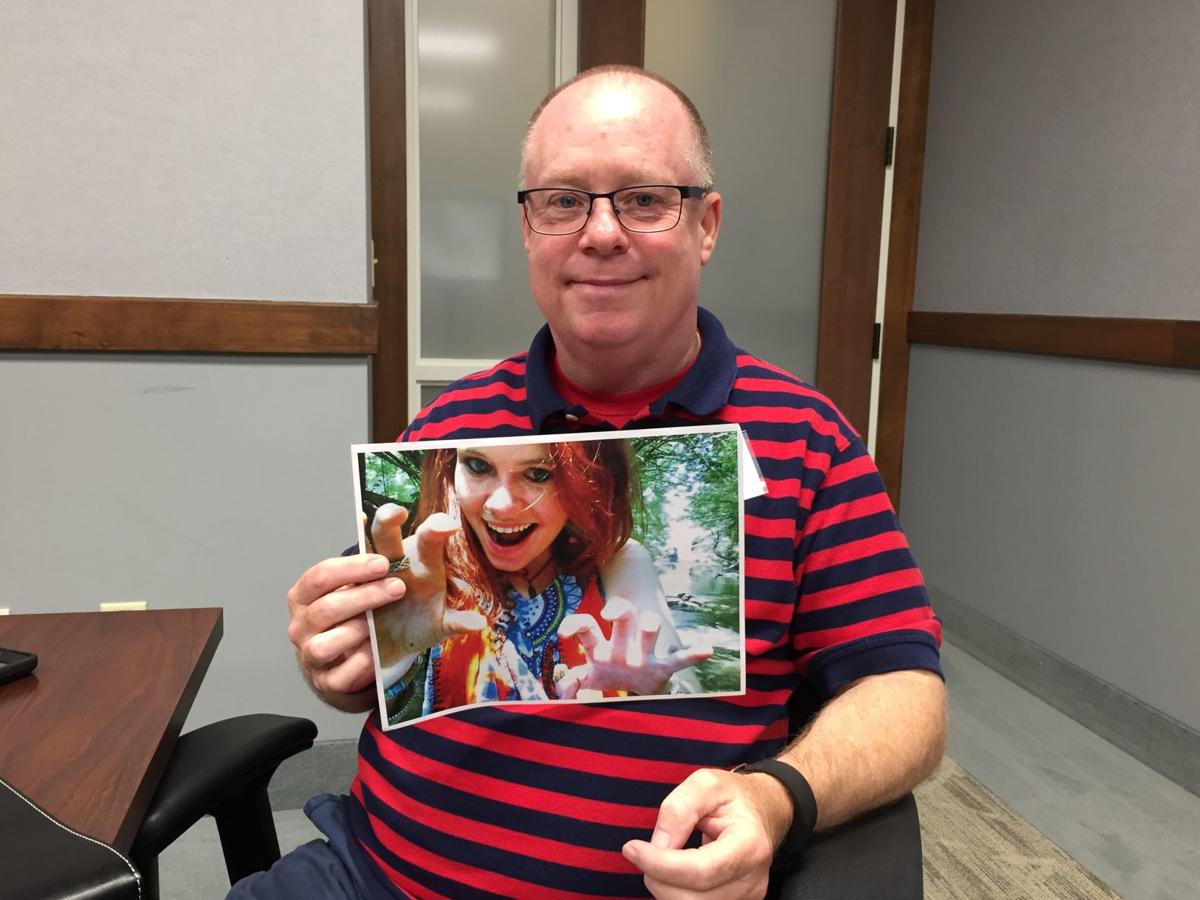 Randy Abbott with his favorite picture of daughter Vanessa, who died of a heroin overdose on Jan. 31, 2015. Abott is one of the organizers of an overdose awareness rally in Raleigh. 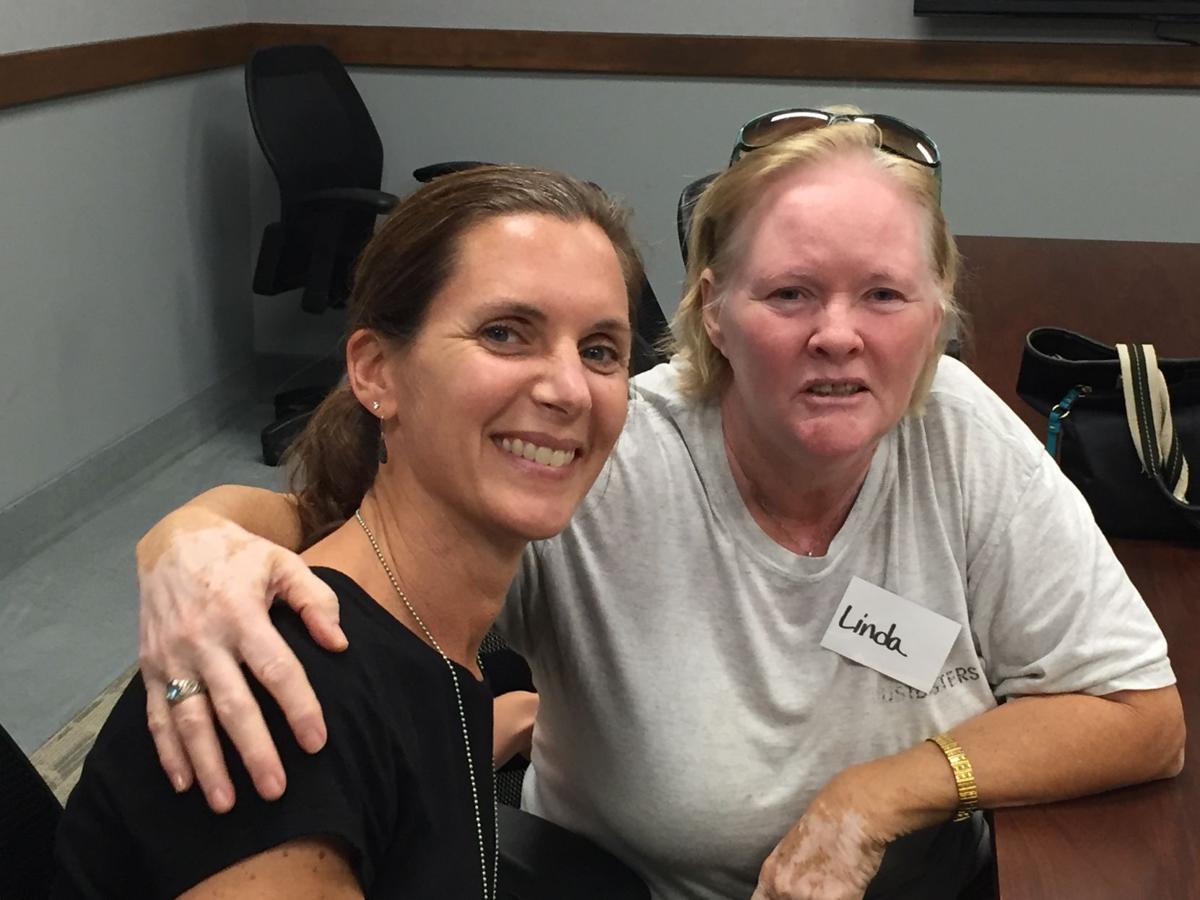 Linda Sandefur (right) with Hospice bereavement counselor Mary Easton at a support group for parents who have lost children to drug overdose. Sandefur’s son, David Davis, died at 28 of a heroin overdose June 10, 2016. 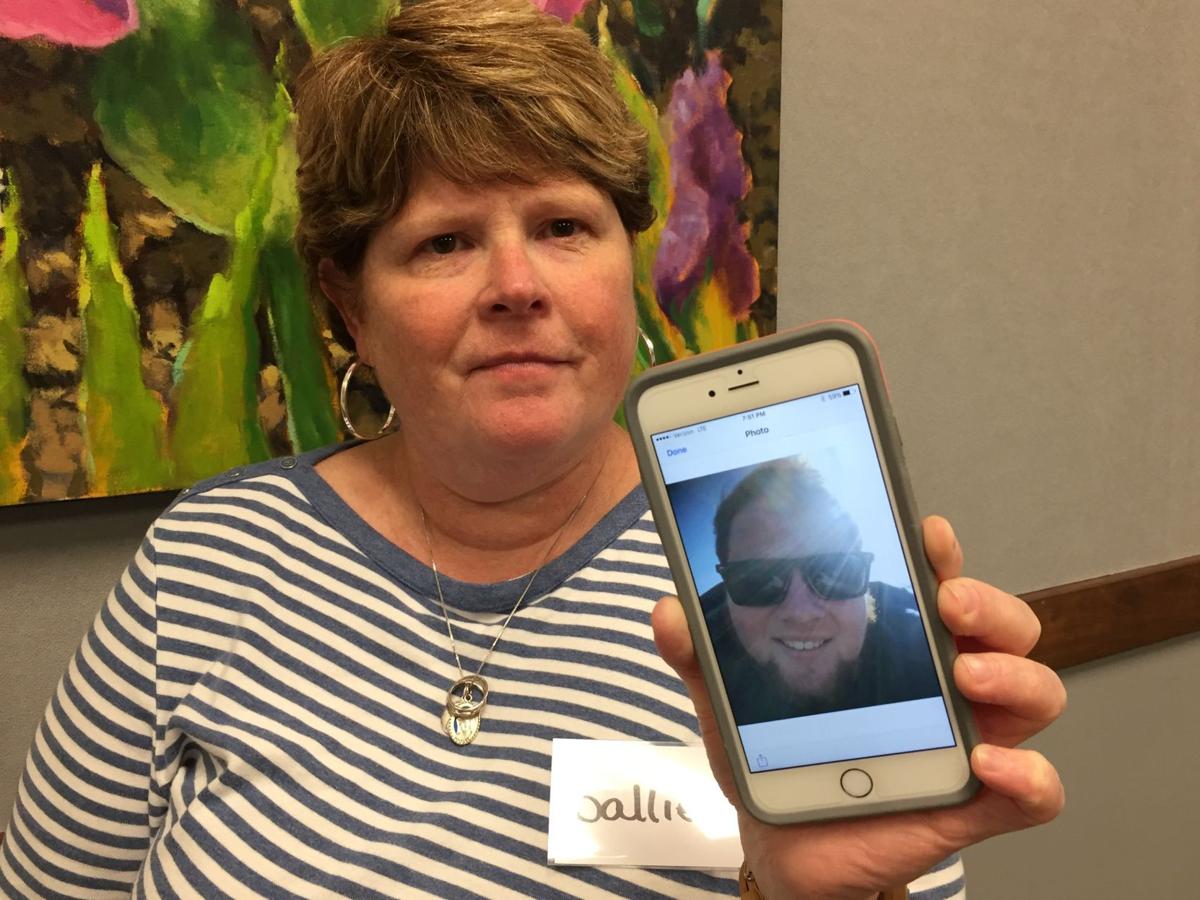 Sallie Kelton shows a favorite photo of her son, Griffin, who was 20 years old and a student at Queens University in Charlotte when he died of an overdose on May 20, 2015. 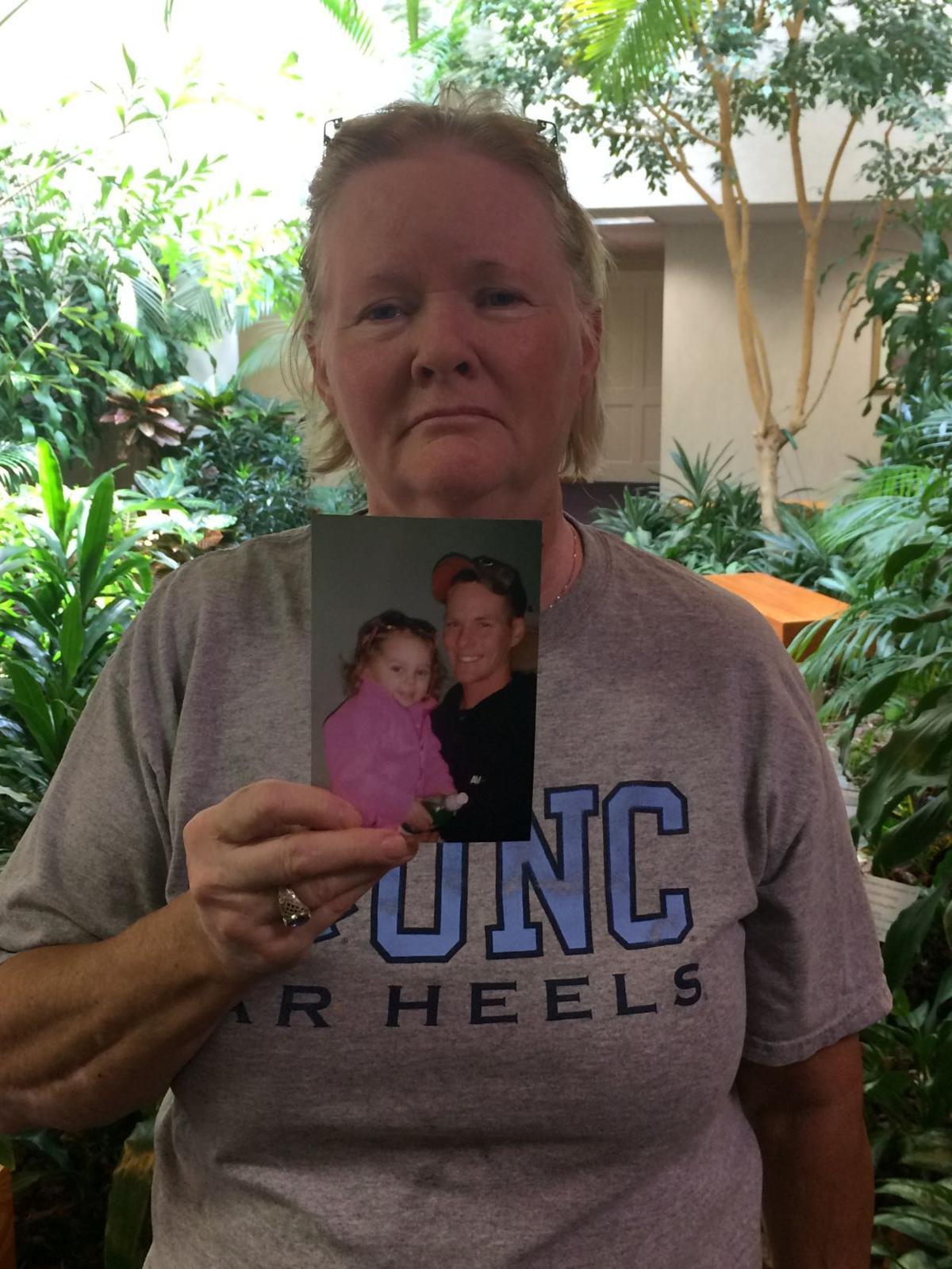 Linda Sandefur with a photo of her son, David Davis.

Randy Abbott with his favorite picture of daughter Vanessa, who died of a heroin overdose on Jan. 31, 2015. Abott is one of the organizers of an overdose awareness rally in Raleigh.

Linda Sandefur (right) with Hospice bereavement counselor Mary Easton at a support group for parents who have lost children to drug overdose. Sandefur’s son, David Davis, died at 28 of a heroin overdose June 10, 2016.

Sallie Kelton shows a favorite photo of her son, Griffin, who was 20 years old and a student at Queens University in Charlotte when he died of an overdose on May 20, 2015.

Linda Sandefur with a photo of her son, David Davis.

Their pain is palpable. They can’t hold back the tears or mask the anguish on their faces as they talk about the children they lost to heroin.

Randy Abbott shakes his head when he hears people advocate for a three-strikes policy on the use of Narcan, a drug that sometimes can reverse an opioid overdose.

“As long as they are alive, there’s hope,” Abbott said. “I would have done anything to keep her alive.”

His daughter, Vanessa, overdosed twice. The first time, in 2012, she ended up on life support. When she came out of it, she swore she’d never do heroin again. She went to rehab more than once, every time coming out positive and determined. In the last six months of her life, this 24-year-old moved back home and enrolled in an Asheville school for massage therapy.

“She was more excited than I’d seen her in years,” Abbott said.

Days before her scheduled move, she went out on a date and never came home. She died at 9:12 a.m., about the same time of day she was born, her father says. The people with whom she was using panicked and transferred all the drug paraphernalia into her car before they ever called 911. Abbott and the rest of the family were busy that day, so none of them had checked Facebook, where the news of her death circulated for hours before the family was notified.

The other people in the room wince at this last detail. They all had similar experiences, with every second seared into their memories. They are parents of overdose victims, a unique fraternity that no one wants to join, but in which they find solace. It’s the one place they know they can share their grief without fear of judgment or rejection.

“There is something special between parents who’ve lost a child to overdose,” Abbott said. “There is an instant connection.”

Abbott is a member of the Overdose Loss Support Group sponsored by Hospice and Pallative Care of Greensboro. Though counselor Mary Easton has led many other groups of parents dealing with the loss of a child, this group is unique, she said.

“There is something about the energy in this room,” Easton said at a recent group meeting. “They feel the loss together but have the energy to bring about change.”

They are doing so, in part, by telling their stories. They want people to realize that addiction can snare anyone. They want them to understand that their children were good people whose deaths should not be dismissed or forgotten. They want to change the way we deal with addiction, so it doesn’t destroy anyone else’s child.

“My biggest fear is that he will be forgotten,” Sallie Kelton said of her son, Griffin. So she speaks about Griffin and the way he died every chance she gets. She spoke to the students at Queens University, where Griffin died of an overdose on May 20, 2015, at the age of 20.

She also shares her story and seeks understanding at Caring Services of High Point, which provides support for people struggling with addiction.

“I’ve learned why he did a lot of the things he did through volunteering at Caring Services,” Kelton said. “That has helped.”

But nothing staves off the pain of his loss for long.

“There is no closure,” Kelton said. “I think about Griffin every morning when I get up and every night when I go to bed.”

“The void it creates can never be filled,” Shelton said. “When you get out of bed crying, that’s a tough way to start your day.”

Caleb Shelton, 27, was a gifted athlete who won a scholarship to play baseball at N.C. A&T. Prescription painkillers prescribed after shoulder surgery and then after a serious motorcycle accident started his battle with addiction. When he ended up in drug court, he was sent to a 90-day rehab program and came back “healthy as a horse.”

“He was ready to get his life back together,” Shelton said. But after 6 months of his sobriety, Caleb’s mother woke around 1 a.m. and found him in the hallway.

“There he laid,” Mary Sue Shelton recalls. “The image of finding Caleb ... I can’t get that out of my mind.”

Linda Sandefur also found her son, David Davis, 28, after he overdosed on June 9, 2016. When he didn’t respond to calls for breakfast, she went into his bedroom and found him on his knees beside the recliner.

“Kind of like he was praying,” Sandefur said. “I knew he was dead. Rigor mortis had already set in. But I tried to do CPR anyway.”

David, who worked as a crane operator and tree climber for Davis Tree Service, had Type 1 diabetes and scoliosis. His heroin addiction also started with prescription pills for back pain.

“I tried to get him to try acupuncture, so he would leave the pills alone, but he only went once,” Sandefur said. David eventually moved from pills to heroin.

“He hated this lifestyle. He hated what it made him become, a liar and a thief,” Sandefur said. “A week before he passed, he asked me to get him into a detox. He said, ‘I know if I can just get on the other side of this, I’ll never touch it again.’ “

She got him an appointment, but he was turned away because he had sores on his arms from picking at his skin.

“It was almost like a hopeless case,” Sandefur said, weeping.

Like the other parents, Sandefur said her son was a compassionate and loving person. He raked leaves for an elderly neighbor, doted on his niece and looked after her. He put new brakes on her car the day he died.

“It was just an awful loss of a sweet person to such an evil, wicked drug,” Sandefur said. “It is such a senseless, useless thing.”

Though she was only 4 feet, 11 inches tall, Vanessa Abbott stood up for others who were bullied, although she often was bullied herself.

Griffin Kelton was a lunch buddy at school who once made the entire class move over to sit with someone who was alone.

“One girl came up to me and said, ‘No one ever spoke to me at school except Caleb,’ “ Mary Sue Shelton said.

Yet they sometimes see judgment of themselves and their children in the eyes of other parents.

“What people who aren’t in our position don’t understand is these kids are some of the brightest, talented and compassionate members of their generation,” Steve Shelton said. “But they got caught up in something they couldn’t control.”

Still, these parents struggle with guilt and anger. They wonder if they were too harsh or not harsh enough. Was there something, anything they could have done to keep their children alive?

“When it’s going on, you don’t know where to go, what to do, who to talk to,” Abbott said. Because of the stigma, many parents never reveal their child’s drug use or cause of death, so it’s hard to know who else has been through it.

“There’s isolation on both ends of the spectrum,” Easton said.

They understand now that opioid addiction is a disease that actually alters the brain.

“At Caring Services, I heard a man say, ‘I love heroin more than my family, my friends, more than anything else in the world. I can’t get over it.’ And he cried,” Kelton said. “That was huge for me.”

Sandefur heard something similar from a recovering heroin user at Mary’s House.

That’s the power addiction has over its victims.

So these parents keep talking, to each other and to those who think it could never happen to their children.

They used to think so, too.

Overdose Loss Support Group member Joyce Terres explains what it's like to live with an overdose death.

This group is open to the public and free-of-charge, but donations are encouraged to keep programming accessible.

To learn more about Caring Services, go to the website at http://www.caringservices.org/

To learn more about drug addiction, go to the website for the National Institute on Drug Abuse at https://www.drugabuse.gov/

Postcard from the edge: Between storms and a pandemic, things have gone 'really bad' for Ocracoke Island