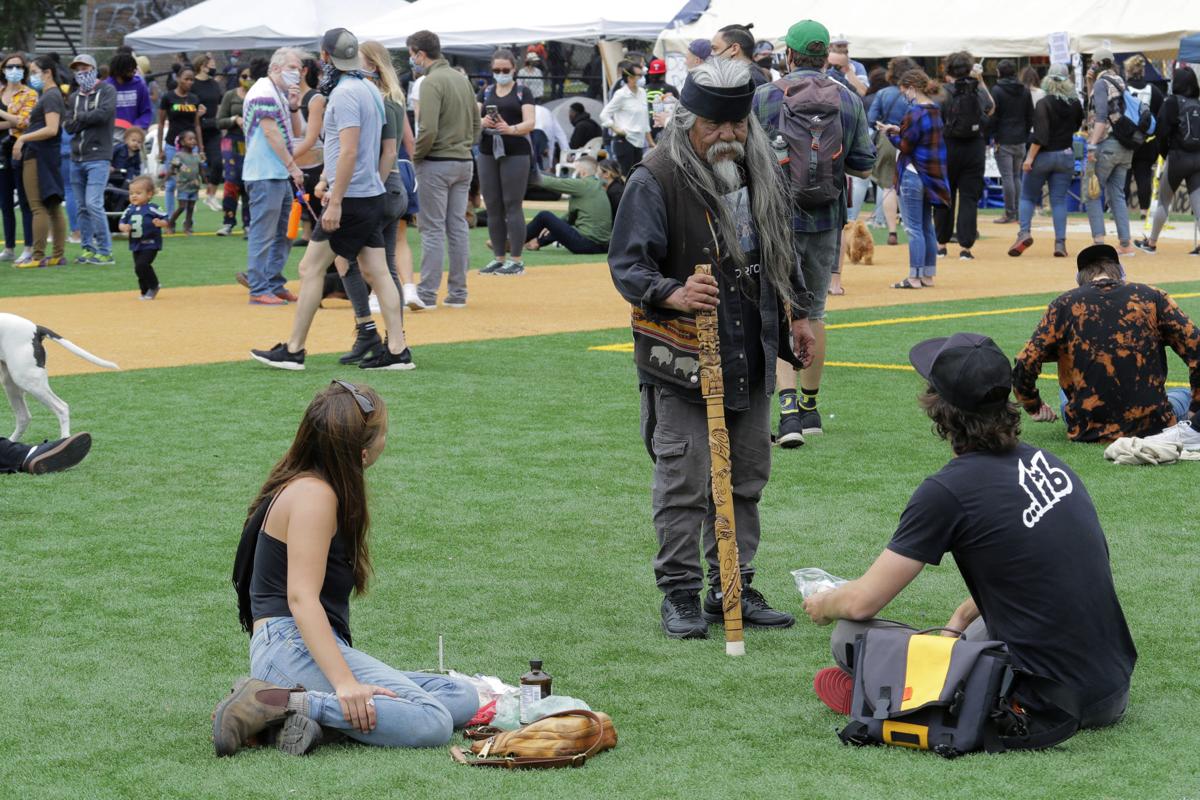 Rick Williams (center), the brother of John T. Williams who was shot and killed by Seattle police in 2010, stops Sunday to talk with visitors at Cal Anderson Park inside what has been named CHAZ in Seattle.

People walk past street art that reads “Welcome to CHAZ,” inside what is being called the “Capitol Hill Autonomous Zone” in Seattle on Thursday. Following days of violent confrontations with protesters, police in Seattle have largely withdrawn from the neighborhood, and protesters have created a festival-like scene.

Rick Williams (center), the brother of John T. Williams who was shot and killed by Seattle police in 2010, stops Sunday to talk with visitors at Cal Anderson Park inside what has been named CHAZ in Seattle.

People walk past street art that reads “Welcome to CHAZ,” inside what is being called the “Capitol Hill Autonomous Zone” in Seattle on Thursday. Following days of violent confrontations with protesters, police in Seattle have largely withdrawn from the neighborhood, and protesters have created a festival-like scene.

CHAZ. No, it’s not about Cher’s son. CHAZ is an acronym for “Capitol Hill Autonomous Zone,” a self-declared autonomous zone in the Capitol Hill neighborhood in Seattle which grew out of the protests over George Floyd’s killing. It was established on June 8 after police fled their East Precinct building.

Questioned by Chris Cuomo on CNN as to how long this zone could last, she answered “I don’t know. We could have a summer of love.”

I don’t know. Perhaps a summer of flies, or “Lord of the Flies.” Is that the final destination for this festival of trust-fund terrorists?

William Golding’s 1954 novel tells of a group of British schoolboys stranded on an uninhabited island. It deals with the thin veneer of civilization that too often separates us from the call of chaos.

The boys establish a form of tribal democracy with three primary policies: having fun, surviving and maintaining a constant smoke signal to alert passing ships for rescue. A conch shell is used as a horn to summon all to a common area. Whoever holds the conch gets to speak at the gatherings, receiving the full attention of the group.

This semblance of order eventually deteriorates as most of the boys become idle. They spend all their time having fun, neglecting those things that would aid in survival. They develop a superstitious belief in a illusional beast existing on the island. All the “hunters” in the group are summoned to hunt down the beast, drawing away those who were to maintain the smoke signal. Ultimately the boys — having now become savage — turn on one another. They set the forest on fire, which consumes most of the island.

I’m not suggesting CHAZ (or CHOP) will go down in flames. At least not those of the pyrotechnic variety. My guess is these Birkenstock Bolsheviks will simply burn out, fading as did the communes that had attracted their grandparents. I mean, how much hackey-sack, funk-rap and DuVernay movies can one take? Eventually nostalgia has to take hold and have you longing for the comfort of video games and the couch in the folks’ basement. There’s a lot to said for food, shelter and convenient defecatoria.

Of course, some of these things have been provided by the city of Seattle. At least the portable toilets, not to mention garbage cans. The food is another story. According to a story posted on Friday by the Western Standard, CHAZ had “already run out of food, putting out pleas for ‘vegan meat alternatives’ and other soy-based food donations.”

As for peaceful, videos have been posted on westernstandardonline.com showing otherwise. One shows a graffiti artist being accosted by followers of the alleged warlord Raz. He is ordered to hand over his phone as tribute to the warlord under the threat of more violence.

Their response? “Yeah, we should have broken your face.” According to a recent Newsweek article fights break out throughout the day and into the evening; heated debates devolve into melees.

The body politic, like those who comprise it, will generally ignore any symptoms of disease until receiving a wake-up call. One such for America was the image of peaceful demonstrators attacked by Bull Connor’s dogs and firehoses. That image galvanized Americans and, through peaceful protest, civil rights made strides.

Today the country has been stunned by the killing of George Floyd. The image of the cop with his knee on Floyd’s neck has roused the nation.

It is too bad that the peaceful demonstrations have been hijacked by those whose only agenda is the destruction of our government, as evidenced by this absurd secession taking place in Seattle. The nation was once rightly appalled by the sight of folks wearing white hoods and carrying tiki torches.

So should the nation be appalled by those who — like Golding’s school boys — scream, “Kill the pig! Spill his blood” as they make wanton sport of our laws.

Community Editorial Board member Romaine Worster lives in Greensboro with her wickedly funny and brilliant husband. Contact her at virichrosie@gmail.com.

I had a different take on "Lord of the Flies". The Wild Boys were the example of chaos in a society that harbors religions of superstition and sacrifice (animal or people). Ralph and Piggy were examples of reason, governance and cooperation. The Wild Boys get the meal, but instead of truly sharing and using their skills to help the rest survive, they use it to humiliate and denigrate Ralph and Piggy. Ralph and Piggy are considered outsiders who do not worship the "beast" and its power over their survival.

The arrival of the English rescue team is an example of order, law, and mature leadership which the Wild Boys realize is stronger than their undeveloped selves and puny superstition.

So how does this compare to the protesters? I don't think it does. It is more in following of a call for mature governance, cooperation, and a knowledgable authority rather than one that is built on superstition and violent power structure.

That is why it is such a relief to have the rescuers land on the beach as Ralph is being pursued. They are powerful, but not threatening, and we have a feeling that as powerful as they are, they will not make any of the boys suffer more than mild punishment.

So take this with as many grains of salt as you will, but I think the story points more to those forces in our country who are being gathered to punish and marginalize "the other" among us, and have respect for not only the laws of the land, but the laws of humanity towards others.

My last sentence was an error. I meant to say that the Wild Boys represent those in our country who use power and force to hurt "the other", while Ralph and the rescuers represent the need for mature leadership that respects the law as well as the rights of "the other" whose rights are just as valid as those who possess the power and violence to hurt them.