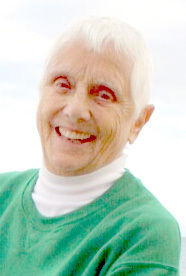 DECEMBER 13, 1925 - JUNE 21, 2020 Eleanor Suhling Dillard died Sunday, June 21, 2020. Born December 13, 1925, to William Gerhart Suhling and Tina Colhoun Suhling in Lynchburg, Virginia. She graduated from Randolph-Macon Woman's College in 1947. She married Edwin Rucker Dillard, Jr. in 1948; he later became President of Dillard Paper Company until his death in 1965. She was also preceded in death by her sons Edwin Rucker Dillard III and Peter Woodroof Dillard, and grandson Edward Rucker Dillard, IV. She is survived by daughters Leigh Williams Dillard, Stamps Dillard Sewell, Eleanor Gerhart Dillard, and Page Randolph Dillard; grandchildren: Ivy, Kate, Vaughan, Rucker, Peter, Dillard, Will, Courtney, Matt, Leigh; and great-grandchildren Michael, George, and Marlyn. A stranger to no one, Eleanor was known by all at the Greensboro Curb Market where she could be seen in vibrant colors and zany hats each Saturday morning always making a point to speak to everyone she met. She was a joy to all who knew her and one not easily forgotten. Until the age of 86 she could be found with a tennis racquet in hand several times a week and took great delight in running her much younger opponents around the court. She was also an avid world traveler who visited six continents and fulfilled a lifetime dream of visiting Mongolia on a trip with her grandson, Rucker. She was a wordsmith by nature and famous for her sayings. Holy suffering cats! She was the archetypal matriarch and kept her family close with an annual two week trip to the beach. Christmas Eve celebrations were a highlight of the family's year. One of her great pleasures was playing a variety of card games with friends and family and everyone was welcome at her daily cocktail hour. She would always lend an ear to friends from all walks of life and regale them with stories of her own adventures. She lived a wonderful life filled with joy and more than her share of heartache, but there was always a twinkle in her eye and a smile on her facelighting up any room she entered. She was truly a woman who wore many hats. Wicky woo wow. The world won't ever be the same again now. Eleanor was a charter member of St. Francis Episcopal Church in Greensboro. A private service will be held at Springhill Cemetery in Lynchburg, Virginia on July 18, 2020. In lieu of flowers, donations may be made to a charity of your choice. Forbis and Dick Funeral Service 1118 North Elm Street