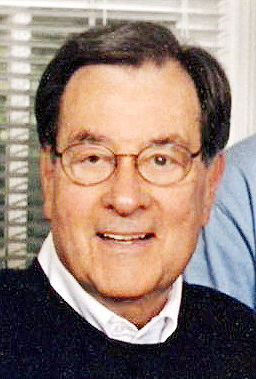 Charles Graham Clapp passed away peacefully at home on January 10, 2020. He was born on August 8, 1927 in Swannanoa, North Carolina and was the youngest of seven children born to Simpson Cornelius Clapp and Effie Bell Clapp. Two years after Effie's death in 1930, Simpson married Annie C. Broughton who reared him like he was her own. In 1945 Charles graduated Lee H. Edwards High School which later became Asheville High School. He attended the University of North Carolina at Chapel Hill with the class of 1950 and returned to UNC in 1953 to receive his B.A. in radio. He joined the US Navy Reserve in 1945 and spent a year on active duty serving in Subic Bay in the Philippines. During the Korean War he was drafted into the Army in September 1950 and served two years as an instructor in the Ordinance School at Aberdeen Proving Grounds in Maryland, where he earned the rank of staff sergeant. Charles began his career at MGM in New York City, then worked on the air in radio at WEEB in Southern Pines and WSJS in Winston-Salem. He joined WNCT in Greenville, NC in 1963 then became a member of the sales team at WFMY in Greensboro in 1966 until his retirement in 1987. Charles was a member of Greensboro Civitan Club for over five decades where served as president and later as the lt. governor of NC District East of Civitan International. He was a member of Triad Advertising Federation and the Charlotte Advertising Club. Christ United Methodist Church was very important to Charles throughout his 53 years of membership. He served on the Administrative Board and numerous work areas including a term as president of Methodist Men. He volunteered many years with Vacation Bible School and participated in numerous theatrical productions at the church. He marveled at the magnificent Fisk organ every time he entered the sanctuary. In retirement Charles served as a volunteer for Greensboro Urban Ministry for 15 years, delivered Mobile Meals, and graduated Greensboro Leadership Seniors then became president of the Leadership Seniors Alumni Group. He was a member of Green Valley Pool for nearly five decades, where he enjoyed summers swimming laps, visiting with friends, playing tennis, and soaking up sun. He joined the GVP staff in his last decade of residence in Green Valley and thoroughly enjoyed working with the other staff and members. Charles was a people-person who loved his family and friends with all his heart. He was an excellent cook who spoiled his loved ones with beautiful meals and was widely known for his amazing pound cakes. Travel was important to Charles and while he traveled to North Africa and made several trips to Europe, his most favorite destination and event in all the world were family summer vacations at Litchfield Beach. Charles is preceded in death by his wife of 60 years, Gloria Gilmore Clapp, and grandson David Palmer Shannon. He is survived by daughter Broughton Burnet and son-in-law Duncan, daughter Katy Shannon and son-in-law Hugh, grandson Stephen Graham Shannon, and numerous special nieces and nephews. A celebration of Charles's life will be held at Christ United Methodist Church on Saturday, January 18 at 11 a.m. with visitation beginning at 10 a.m. Memorials may be made to Christ United Methodist Church, 410 North Holden Road, Greensboro, NC 27410, or the David Shannon Memorial Scholarship Fund, UNC Chapel Hill Office of University Advancement, 208 W. Franklin Street, Chapel Hill, NC 27514.

To plant a tree in memory of Charles Clapp as a living tribute, please visit Tribute Store.
+1
+1