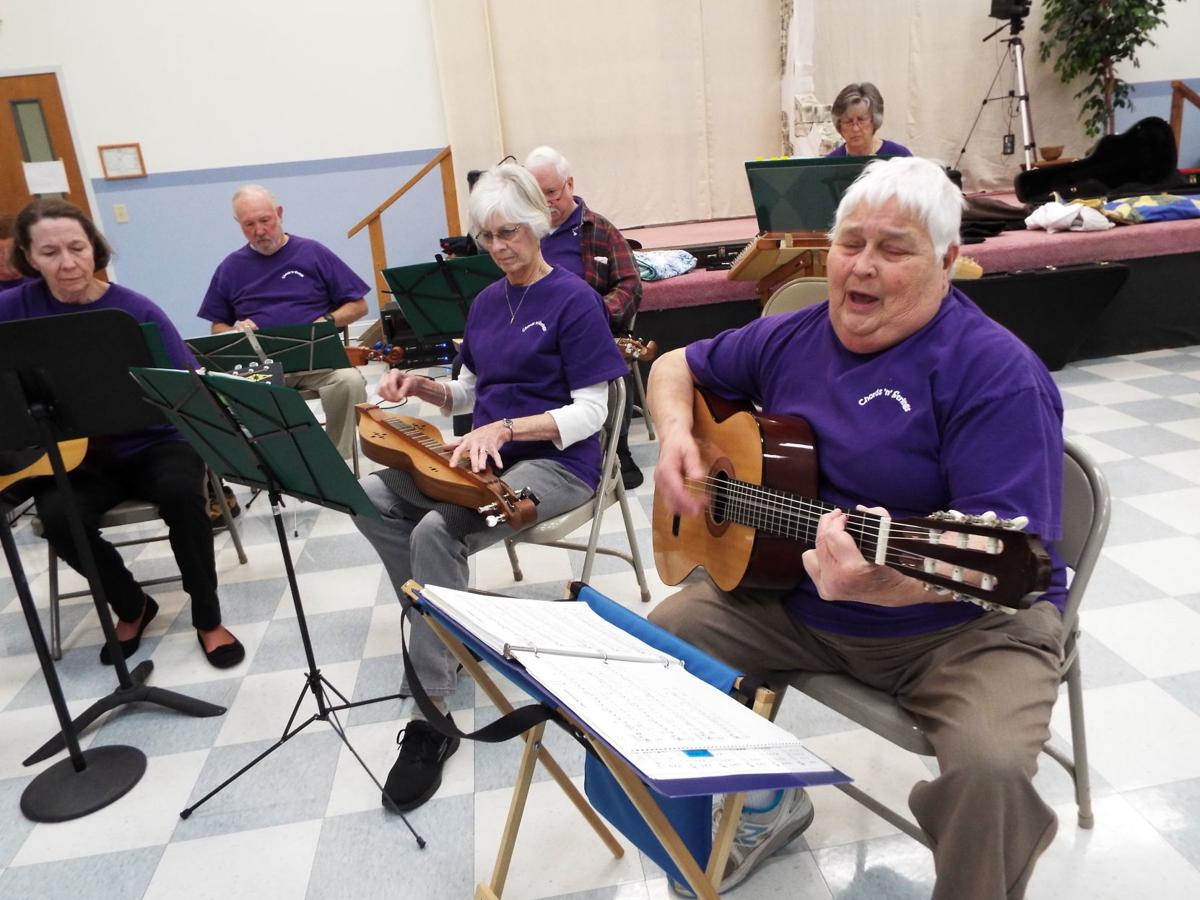 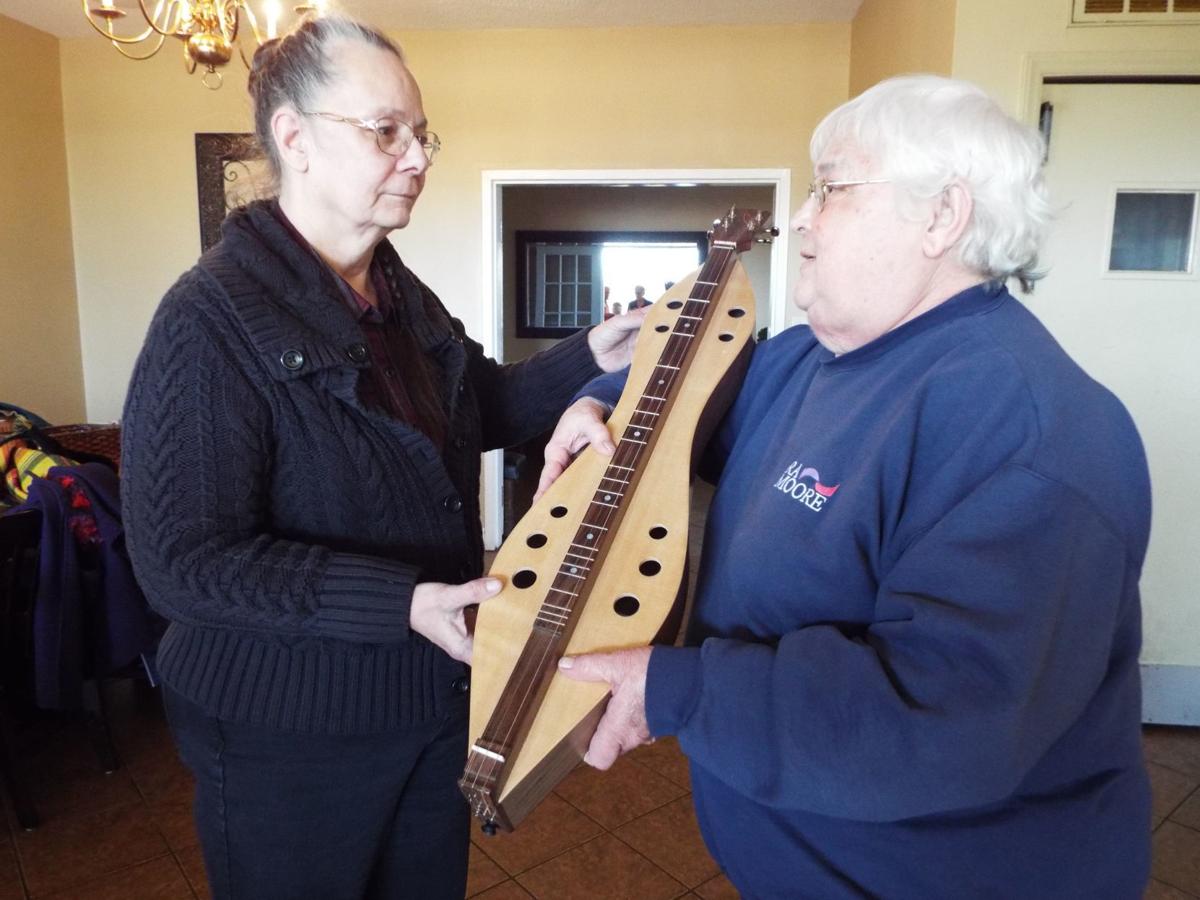 Former student Karen Smith-Gratto presents Carolyn Anderson with the first dulcimer Smith-Gratto made. Smith-Gratto teaches and plays with other groups but took her first lessons from Anderson. Anderson taught lessons at Bethlehem Church in a satellite classroom for Rockingham Community College for a few years until the school lost its funding for free classes for seniors. 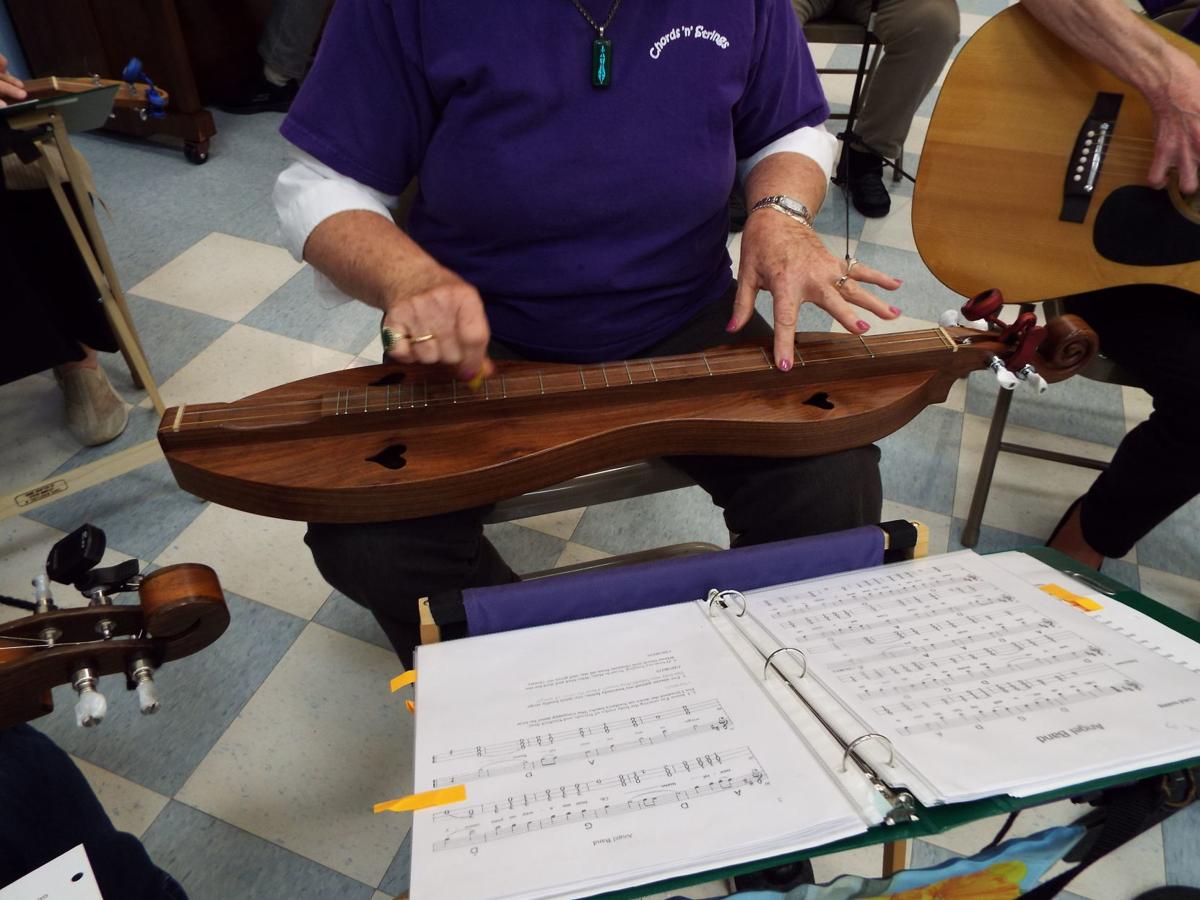 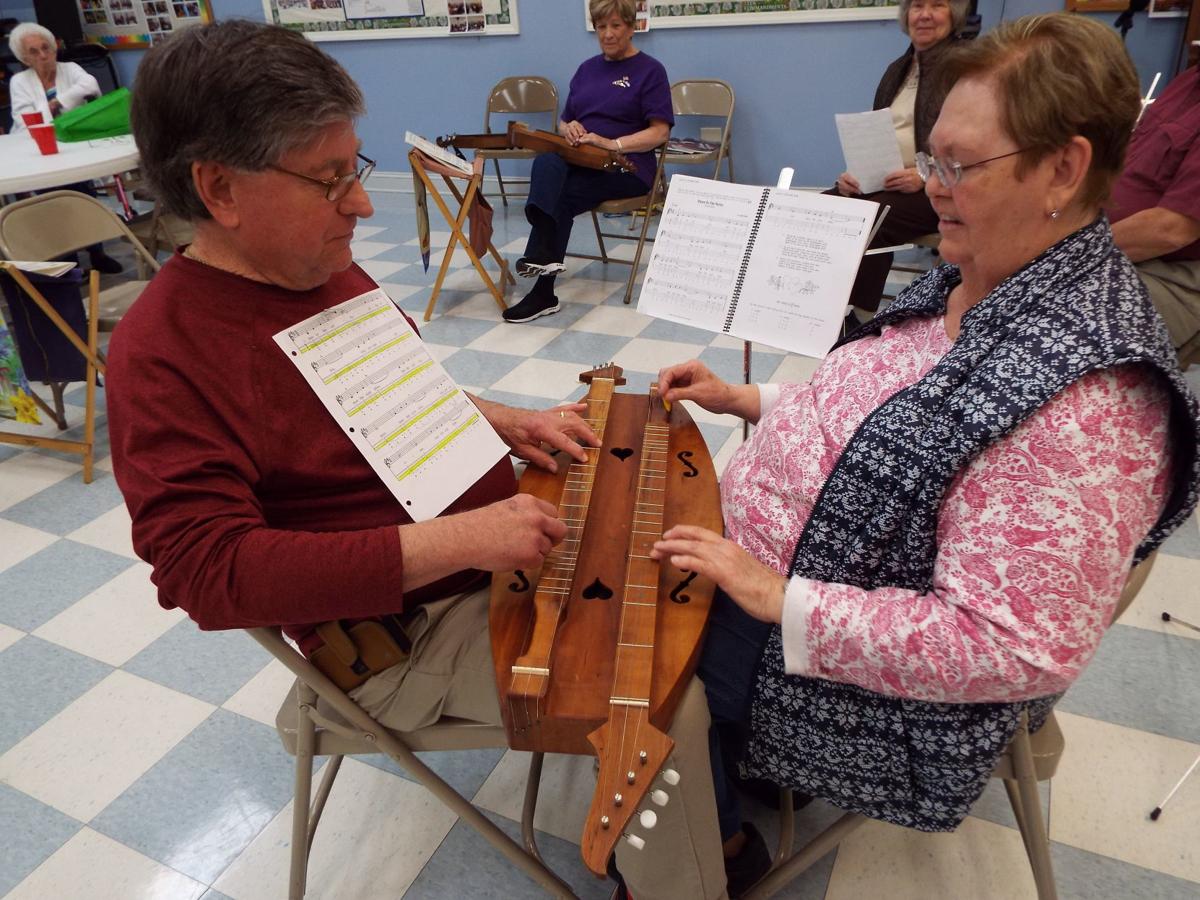 Tom Allen and his wife, Rosa, demonstrate the Courting Dulcimer. Rosa says she can see her music better on Tom’s chest. 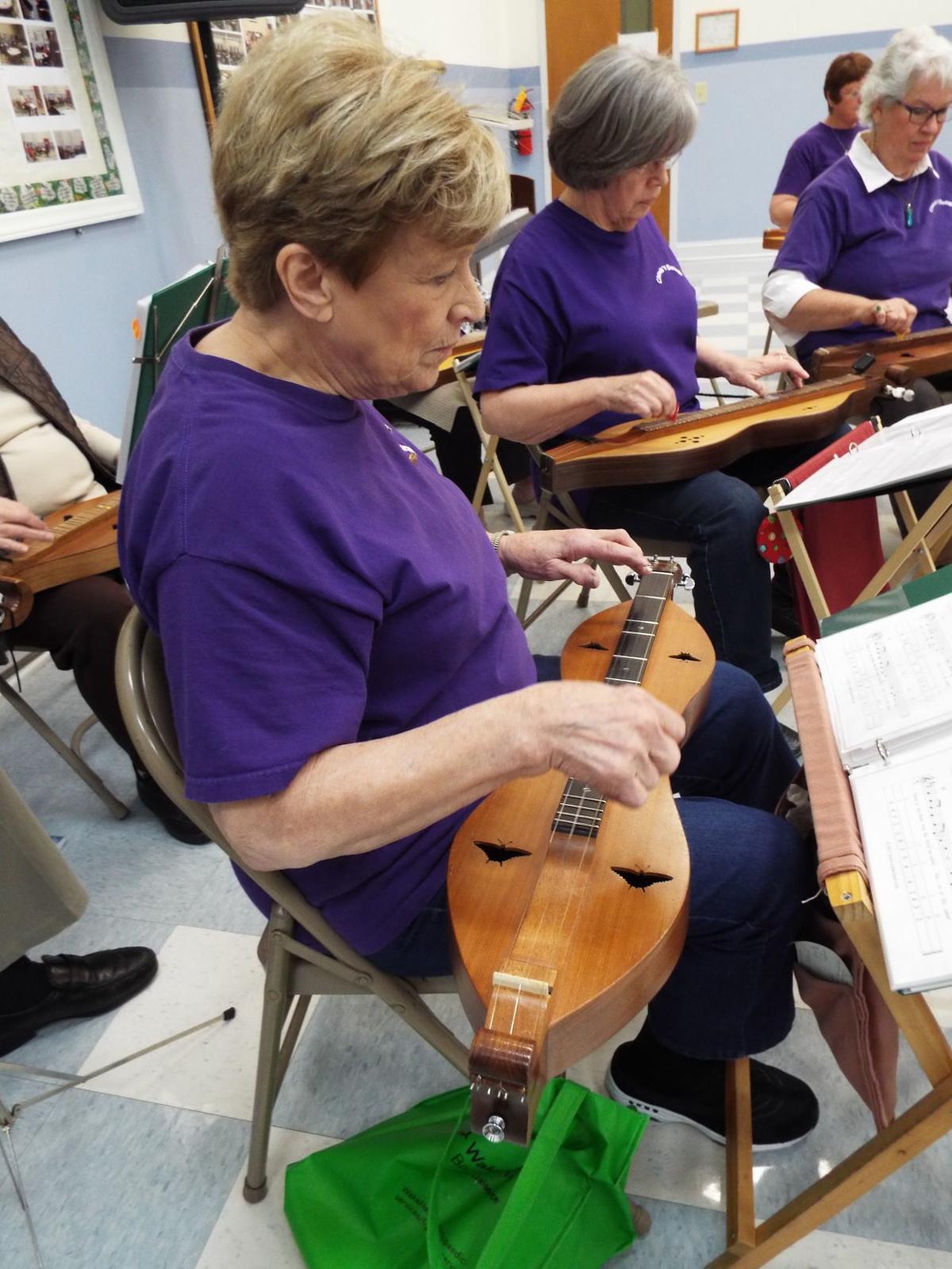 Concentrating on their music are, from left, Jenny Banfield, Gail Pendry and Mary Jo Boswell.

Former student Karen Smith-Gratto presents Carolyn Anderson with the first dulcimer Smith-Gratto made. Smith-Gratto teaches and plays with other groups but took her first lessons from Anderson. Anderson taught lessons at Bethlehem Church in a satellite classroom for Rockingham Community College for a few years until the school lost its funding for free classes for seniors.

Tom Allen and his wife, Rosa, demonstrate the Courting Dulcimer. Rosa says she can see her music better on Tom’s chest.

Concentrating on their music are, from left, Jenny Banfield, Gail Pendry and Mary Jo Boswell.

EDEN The woman who popularized dulcimers in Rockingham County was honored Jan. 21 with a special luncheon at Santana’s.

Despite temperatures in the 20s, about 35 students and former students of Carolyn Anderson turned out to express their appreciation for the hours she spent teaching them to play.

After teaching dulcimer classes for 18 years and leading the Chords and Strings for 10 of those years and Happy Sounds for eight years, Anderson is stepping down as leader of the group. The two groups recently combined but haven’t decided on a new name yet.

Assuming the leadership of the group earlier this month, Mary Jo Bosley was especially pleased when Anderson arrived and realized the gathering was a surprise honor for her.

Wayne Seymour entertained with a variety of dulcimer and other instrumental songs and spoke for the group in general.

“We appreciate all you have done for us,” Seymour said.

Former student Karen Smith-Gratto, a retired N.C. A&T professor, now makes dulcimers and presented Anderson with the first dulcimer she made. Smith-Gratto teaches and plays with other groups but took her first lessons from Anderson.

A native of Rockingham County, Anderson has lived in the Bethlehem United Methodist Church neighborhood all her life, the daughter of the late Edward R. Anderson Sr. and Irene Gunn Anderson.

Six months after graduating from Wentworth High School in 1959, Anderson went to work as bookkeeper at First National Bank in Reidsville.

Over the years, she moved through the ranks to positions including security officer, compliance officer )making sure the bank complied with all the regulations) and retired as director of the credit card division in 2000.

All her life, Anderson loved music, taking piano as a child for two years from Maude Reynolds in Wentworth. She taught herself to play guitar when she was in her 20s.

“My grandma (the late Cora Anderson) was very musical,” she said. “She played the guitar and piano and danced, and I think she passed a lot of her musical ability on to me.”

For the past 15 years, Anderson has been pianist at Bethlehem United Methodist Church.

When she was in her early 20s, Anderson and some friends from Reidsville went on a cruise. Passengers included a German-born Jewish woman who played the dulcimer. The two women were joined by a young boy performing “Kumbaya” at one of the nightly talent shows. When they finished, people were asking what country they were from since Anderson also had a strong Southern accent.

“I had never seen a dulcimer,” Anderson said. When she returned home and told her mother about it, her mother ordered her one for $25 from Sears. For years, she worked at teaching herself to play the dulcimer until she became proficient.

Then, in the mid-1990s, Rockingham Community College began offering dulcimer lessons with Eden’s Bill Rakes as the instructor. Anderson took lessons from him for about three years.

By the time Anderson retired, Rakes had stopped teaching.

“People kept telling me they wished they could play an instrument, but they didn’t know any music,” Anderson said. “I knew I could teach the dulcimer. It’s an easy instrument to learn for beginners.”

She approached the college and asked if they would make Bethlehem Church a satellite classroom; they paid her to teach for several years.

That first class, she had 15 students and at one time as many as 20. After a few years, the college lost its funding for free classes for seniors.

“I decided I would teach for free as a part of the church Outreach Ministry,” Anderson said. Soon, the enrollment was too large for adequate instruction, and Anderson recruited Rakes to work with the advanced students.

Sallie Pena also began working with the advanced students and soon organized a performance group, Chords and Strings, comprised mostly of the dulcimer students but also including a washtub bass played by Bob Pasour, George Cox on the harmonica and Anderson on guitar.

When Pena moved to Florida five years ago, Anderson took over Chords and Strings” and then organized the Happy Sounds, mostly for intermediate students.

Quickly, the groups became popular within the community. They perform twice a year at 10 different nursing homes, for business and church organizations and functions, and at Bethlehem Church twice a year, usually the first week in April and December.

Boswell said when her daughter, Stacy Cavey, took dulcimer classes at Western Carolina University, they bought her a dulcimer she only used a short while. About 10 years ago, Boswell heard other Wentworth United Methodist Church members talking about the dulcimer lessons. She decided to pull out her daughter’s dulcimer and join the group.

Since then, she has honed her skills and says her musical background was a big help. When Anderson decided to step down, Boswell volunteered to lead, along with Dayne Blair.

“We look forward to sharing our music with the nursing facilities and other groups in the county,” Boswell said. “We want to give them the kind of music they remember from their youth.”

Joyce Vaughn also contributes her musical talents and ideas to the planning of the programs, Boswell said.

After the death of her husband, retired nurse Jennie Chapmon Banfield returned to Reidsville from Salisbury.

“For the first time in my life, I had nothing to do,” Banfield said. “I had lost my husband, and I was just sitting home and crying”

Former Reidsville High School classmate Vivian Smith suggested taking dulcimer lessons at Rockingham Community College. Since Benfield had a dulcimer she had purchased at Dollywood as a decorating accessory, she, Smith and “my little Dollywood dulcimer” went to class the first night.

Instructor Bill Rakes tried to tune her dulcimer but quickly returned it to Banfield, telling her “to take it home and put it back on the wall. That’s all it was good for.”

Anderson “fixed me right up with a cardboard dulcimer and an instruction song book,” Banfield said. Now she has three dulcimers that “don’t hang on the wall.”

“You can’t cry and play dulcimer, so I had to quit crying and practice,” Banfield said. “It has been good for me every since.”

Not only has she learned a new skill, but she has developed a wide circle of friends from throughout the county and state as a result of the lessons. She has attended workshops in Kentucky; Ferrum, Va.; and Cullowhee.

Madison resident Pat Forbes recalled hearing the dulcimer group perform at Kellam Grove Methodist Church several years ago. She followed Anderson to her car to tell her how much she had enjoyed the program and was invited to come to one of the classes.

Not only did Forbes take the lessons but talked her husband into enrolling. Now they show off their skills at concerts and programs playing what is known as the Courting Dulcimer.

Now, after 18 years, Anderson has retired as leader and Boswell has taken over those duties. Anderson still plays guitar with the groups and teaches two classes every Wednesday at the church.

For those who might be interested but don’t want to purchase a dulcimer in the beginning, Anderson rents cardboard dulcimers.

“They sound surprisingly well and they are good learner instruments,” Anderson said.

Any group, organization, family, or individual can participate in the Adopt A Street/Spot Program. Their efforts will be recognized with a sign along the area they choose, said Eden Municipal Services Director Paul Dishmon.

They first must obtain an application from the planning department at city hall. When the paperwork is completed, it will include the wording on the sign that will be put up and where it is to be placed. The group agrees to work six times a year cleaning litter along the adopted sections. Most areas run about a half mile to a mile.

“Everyone has to watch a training video to make sure everyone stays safe,” Dishmon said. Among the criteria is an age requirement.

Once the agreement is submitted, the sign should be ready within a month. Some participants hold a small ceremony at the signs when they are placed, Dishmon said. The city furnishes large trash bags and vests on the pick-up days, and pickup the trash within the next day or so.

“There’s plenty enough to go around,” Dishmon said. “I see it every day.”