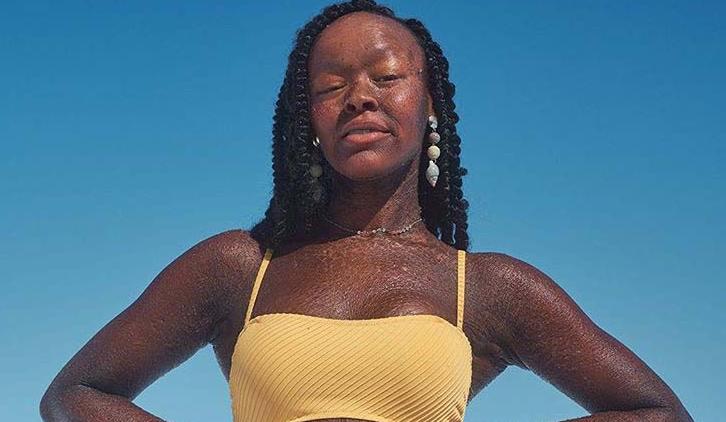 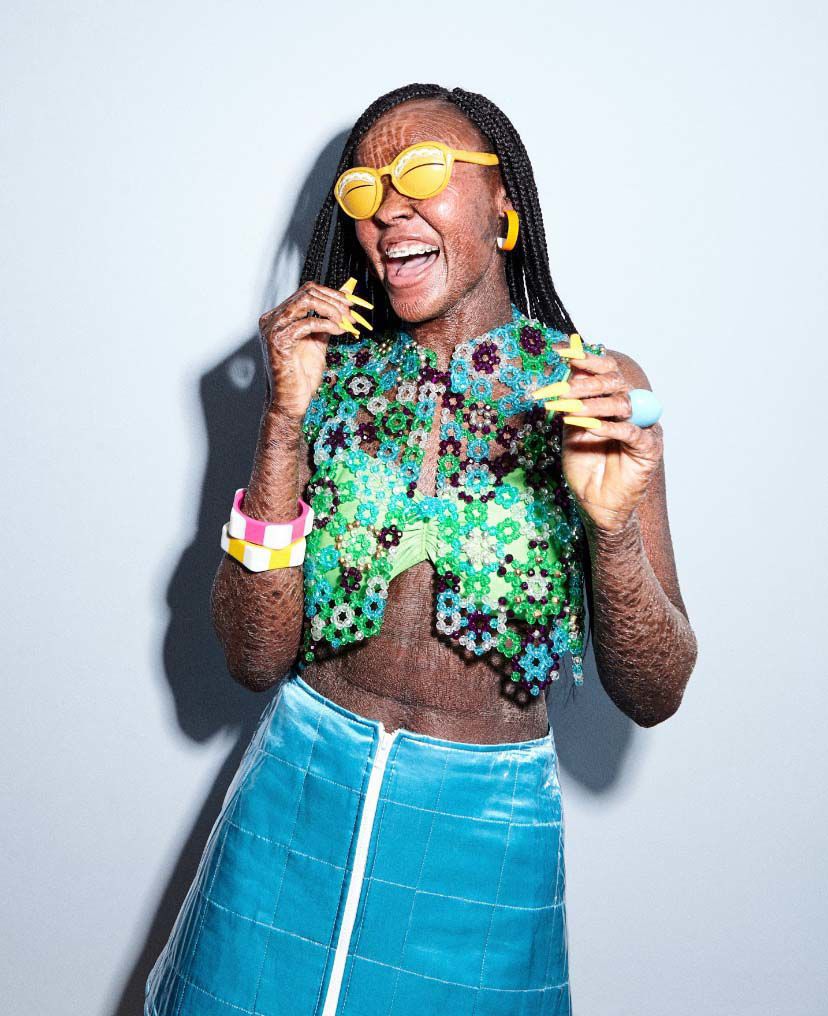 Jeyźa wants to be on the cover of Vogue someday. 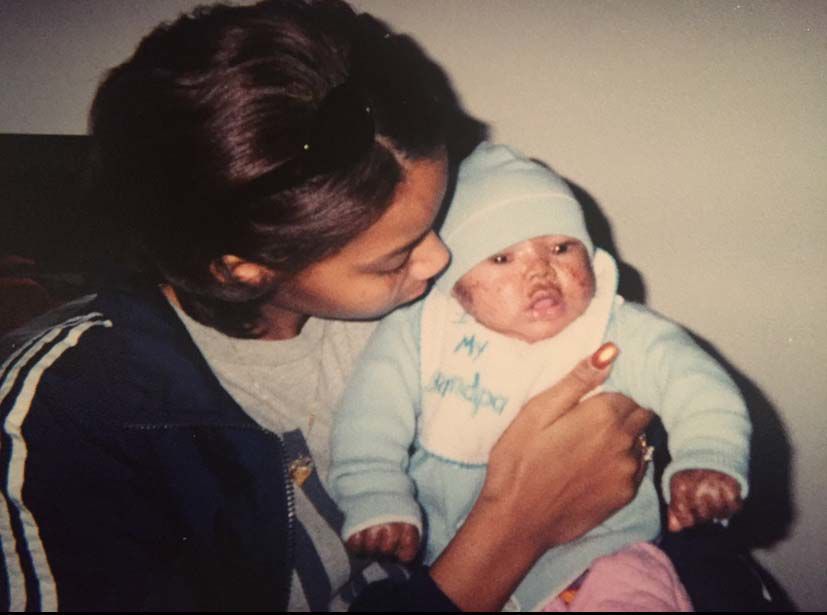 It took several months after she was born for Jeyźa Gary to receive a diagnosis of lamellar ichthyosis.

Jeyźa wants to be on the cover of Vogue someday.

It took several months after she was born for Jeyźa Gary to receive a diagnosis of lamellar ichthyosis.

Jeyza Gary first learned how to stand up for herself from her mother.

On her first day of kindergarten in Fayetteville, Jeyza — shy and a little embarrassed — stood in front of the class beside her mother. Shelby Barber — tall and dignified, wearing dress slacks and eyeliner — made an announcement.

“This is my daughter, Jeyza,” she said. “She has a skin condition called lamellar ichthyosis. Does anyone know what a lizard looks like?”

And so began every year of Jeyza’s elementary education.

Now a rising senior at UNC-Charlotte, Jeyza doesn’t rely on her mother anymore to advocate for. Lamellar ichthyosis is visible — it causes shedding and scaling all over the body — so people ask questions.

Jeyza is still introverted, but not shy or embarrassed. She would rather people ask than stare.

“There will be times that you’ll see my skin where it’s super chocolate all over, kind of a solid color,” she said. “Then you’ll see times where maybe my face and hands and arms are a bright orange, then other parts of me are super brown. It’s just like my body is constantly trying to shed that extra layer of skin.”

Jeyza has striking features — her 6-foot tall frame is slender, her face sculpted. In the spring of 2018, she began sending head-shot photos to modeling agencies. By October 2019, she landed her first big gig: Target’s 2020 swimsuit campaign.

Lamellar ichthyosis, caused by a genetic mutation that prevents the development of a healthy epidermis, occurs in about one in every 100,000 people.

When Jeyza was born, she looked like she was covered in plastic wrap.

All infants with lamellar ichthyosis have this shiny, waxy layer — the collodion membrane — that sheds within two weeks after birth, leaving behind thick, scaly skin.

Other symptoms include a tendency to overheat — her outer layer of skin prevents her from sweating and releasing heat — as well as dehydration, hair loss and abnormal nail development. Jeyza keeps water, an umbrella, Vaseline and Aquaphor with her at all times.

Despite her mother’s first-day-of-school announcements, Jeyza still experienced bullying in elementary and middle school. Her brother Grant Gary, two years younger, would often come to her defense. The comments he heard infuriated him.

“Do you see that girl over there?” kids would ask him. Yeah, that’s my sister. What do you have to say?”

In the cafeteria one day, Grant saw Jeyza crying, while a group of kids laughed nearby. She told him that a boy in the group had been bullying her.

Grant, who was in the third grade at the time, said he marched up to the ringleader, a fifth-grader, and pushed him.

“Don’t talk to my sister like that,” Grant told him.

Grant said he was suspended that day. It wasn’t the last time he got in trouble for defending Jeyza.

Jeyza has trouble remembering specific comments that bullies made in her childhood, but she remembers the pain she felt.

“I remember times I would be hating myself,” she said. “I only started questioning it when I saw that people saw me as different.

“At home, I was me. I felt so safe around my family. But then, when I went out into the world, I was reminded of how different I was. That’s a complex thing to try to understand as a 7-year-old — or 12, for that matter.”

But Jeyza also credits her inner strength to her family — they didn’t pity her, and they always made her feel normal. She wore shorts when Grant did. If she didn’t want to go to school because her forehead was peeling, her mom told her to wear a bandana. She joined choir since she couldn’t play sports, showing off her gifted vocals.

In her early high school years, Jeyza tried to cover up with makeup. She never left the house without putting on mascara, lip-gloss and drawing on her eyebrows. It wasn’t until her senior year when she got braces that something in her self-esteem shifted.

“It wasn’t this big aha moment,” she said. “I literally got braces, and then the confidence ensued.”

It was the first time she remembers feeling beautiful. She ran for prom queen and let her uncle, an amateur photographer, take pictures of her. She loved being in front of the camera.

Those years of self-hatred finally turned into self-acceptance.

“It didn’t matter what state my skin was in,” she said. “Talk about someone that was feeling themselves — that was Jeyza. It felt like freedom.”

In her senior yearbook, a friend signed her note, “P.S. You need to model.”

Jeyza started sending portfolios to modeling agencies in May 2018.

In September, an agency called We Speak Model Management invited her to an open casting call in New York. But around that time, Hurricane Florence had caused severe damage across North Carolina.

Jeyza couldn’t bring herself to ask her family about New York. She told herself if it was God’s plan, the opportunity would arise again.

It did. In April 2019, We Speak founder Briauna Mariah sent Jeyza an Instagram direct message — “When are you coming to New York?”

A month later, Jeyza signed with the agency.

We Speak represents a diverse set of models — some have vitiligo and Down syndrome, some are over 50, and some are gender fluid. Mariah said Jeyza is the first model she knows who has ichthyosis.

“I’m so surprised to hear that she had applied to other agencies and no one offered to sign her,” Mariah said. “When she applied, I saw a high-end model eager to get her foot in the door.”

Since signing with We Speak, Jeyza has juggled her classwork with a budding career. She has modeled in multiple photo shoots featured on Vogue Italia’s website. National outlets like Refinery29 have written articles about her, and her social media followers have skyrocketed. She said one of the most rewarding parts of the experience has been connecting with the ichthyosis community. She had never met anyone else like her before she started modeling.

The Target campaign hired her in October, and flew her to California for the November photo shoot.

The photographs feature Jeyza in a honey yellow bikini.

She attended casting calls at New York Fashion Week in early February, and Glamour magazine later featured her on its digital cover, along with 10 other models, for the February 2020 “self-love” issue.

In the past decade, the body positivity moment on social media has accompanied changes in the fashion and beauty industries. Brands like Aerie, Old Navy, Dove and CoverGirl have embraced “real” campaigns — making advertisements without Photoshop and hiring models outside the traditional mold. But Jeyza said she has learned to be cautious in believing all casting directors are willing to hire nontraditional models.

Mariah said commercial brands have moved at a faster pace than high fashion brands in terms of diversity in their advertisements.

For Jeyza, it’s a lot of pressure to have that responsibility of representation — not just as a person with ichthyosis, but as a black woman too. The Target campaign made her even more popular online. She now has 19,500 Instagram followers.

“Neither one of us expected the huge amounts of press she’d get,” Mariah said. “She’s representing a lot of people who don’t currently see themselves right now.”

The ichthyosis community’s response has been overwhelmingly positive, Jeyza said. One woman said seeing Jeyza’s pictures empowered her to wear shorts for the first time.

But she has received internet backlash too. A racist website wrote a headline calling her “extremely ugly.” One commenter said the Target campaign shouldn’t have placed a “sick” looking black woman next to a healthy white woman in the photographs.

But she’s learning to cope with the online attention, carefully choosing when to respond to comments and when to take breaks from social media.

Jeyza calls herself a perfectionist and wants to do it all — finish her degree in special education and move up in modeling.

Her goals include runway shows, more major brand campaigns and the cover of Vogue.

“I just want to become really, really good at what I do,” she said. “I do understand that my condition got me in the door, but I don’t want that to be all I’m known for.”

She said it’s sad for her to look back on the little girl who didn’t want to be in her own skin. Her confidence today comes from learning to find affirmation within herself instead of others.

“I’m so deep into accepting myself, I could never imagine it being any other way,” she said. “Nothing that anybody says — even if it hurts — will make me wish I didn’t look like this.”

At UNC Media Hub, students are hand-picked from various concentrations in the UNC School of Media and Journalism to work together to find, produce and market stories with state, regional and at times, national appeal.