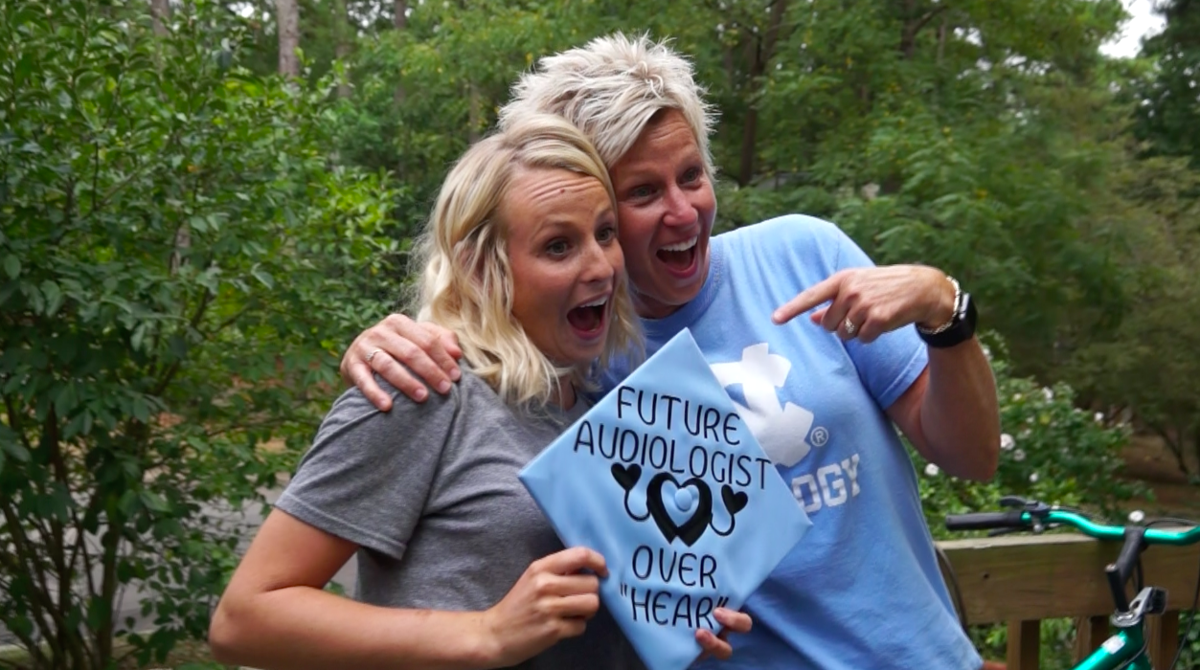 As Alexis Nye (left) heads to graduate school to study audiology, she and her mother, Jodi Nye, celebrate. “She’s going to be able to understand what those parents are going through, and she’s just going to be a great example and a mentor,” her mom says. “I’m just excited to see it.” 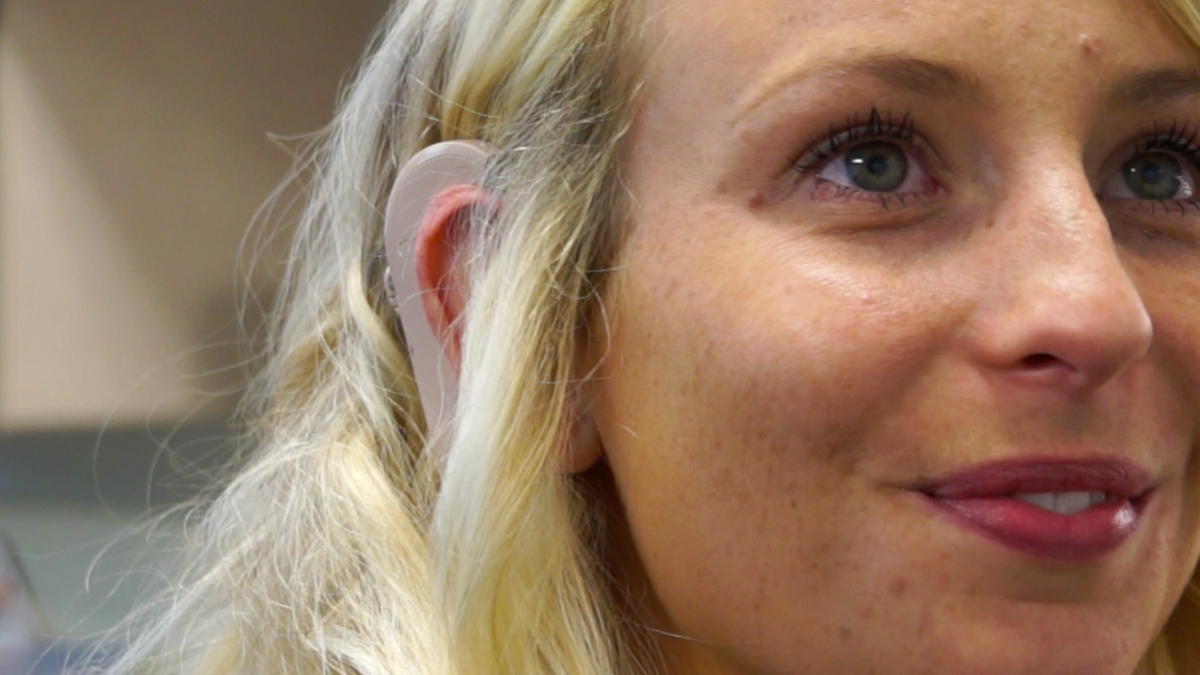 “As soon as I take the magnet part off, I can’t hear,” Alexis Nye says of her cochlear implant. “And as soon as I put it back on, I can hear.” 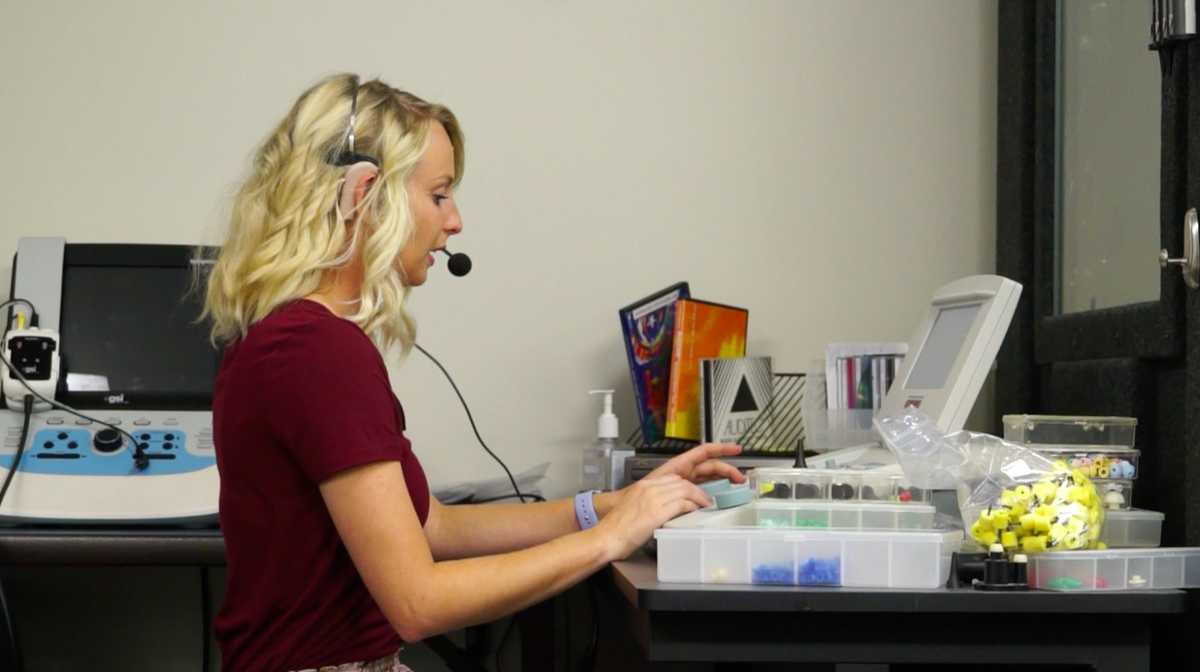 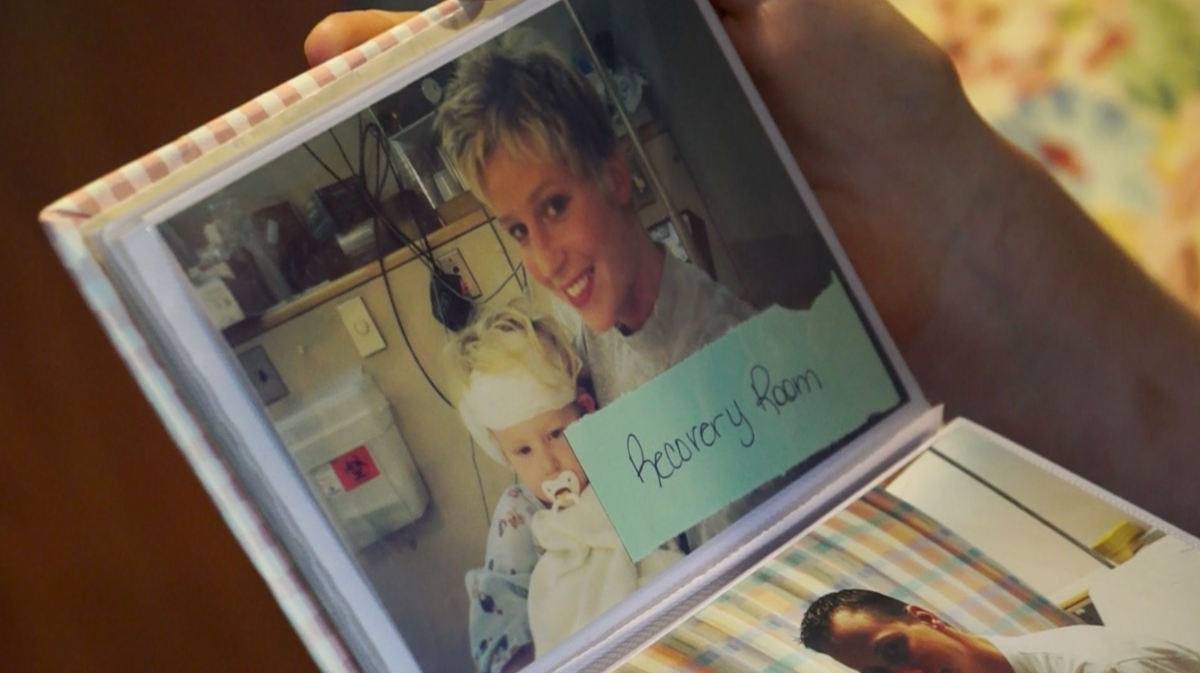 Alexis Nye shows a photo of herself after her first surgery. 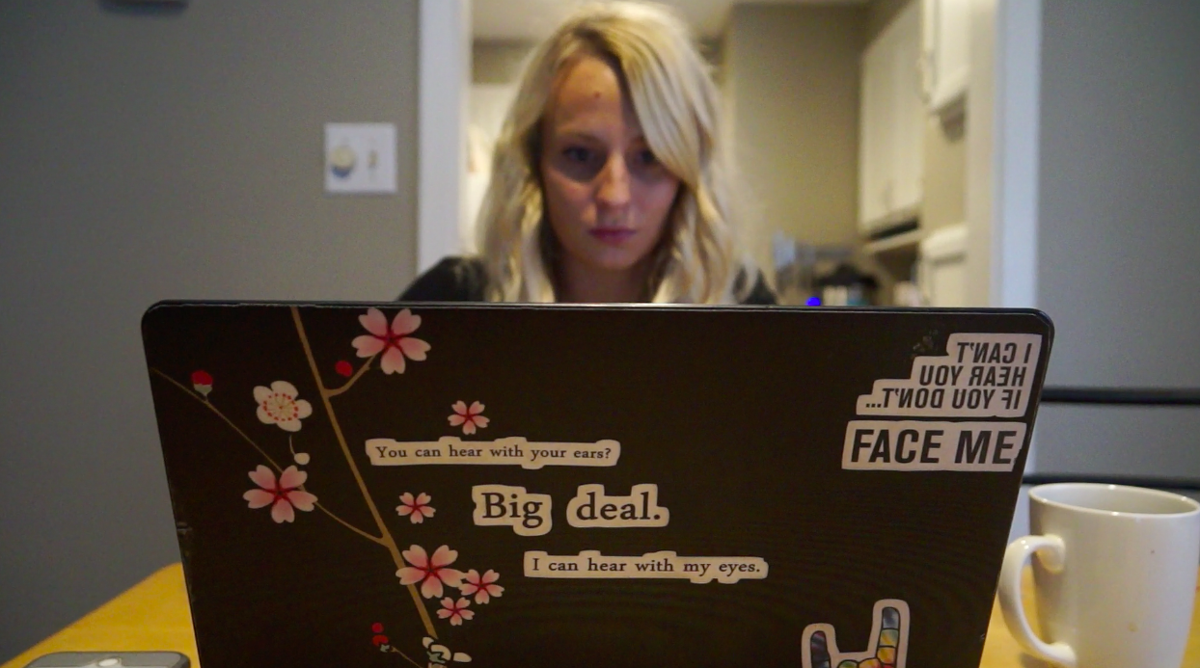 Working as a camp counselor at Lions Bear Lake Camp, a Michigan program for deaf and hard-of-hearing students that she had attended as a camper, inspired Alexis Nye to pursue audiology.

CARRBORO — Alexis Nye sits at the low, lightweight kitchen table at her home in Carrboro. It’s the quintessential graduate school apartment: homey, yet transient. She is fresh from her clinical rotation with UNC-Chapel Hill’s Department of Audiology, her name badge clipped to her white shirt with a glittery gold outline of an ear.

Nye’s lifestyle fulfills some longtime goals: working toward her Ph.D. in audiology at her dream school, conducting hearing screenings for local kids and studying under some of the top experts in the field.

And there’s something else going on behind the scenes: Nye was born profoundly deaf.

Yet two cochlear implants have changed her life, allowing her to hear sounds of traffic and lectures in her audiology classes, and the voices of her friends and loved ones.

Nye “doesn’t let her hearing loss define her,” her boyfriend, Nick Juhasz, said. On their first few dates, he had no clue that Nye was deaf. And, in a move that would surprise absolutely nobody who knows her, Nye didn’t tell him.

“We were getting ice cream,” he said, “and she just pulled her hair back and showed me her cochlear implant and then started telling me about what it was and everything that’s gone on as far as getting the surgeries and going through all the life events as far as hearing loss goes.”

The “life events” are dramatic.

Six months old: She’s diagnosed as profoundly deaf. Two years old: She receives a cochlear implantation on one ear. Then she enters an oral deaf preschool program in Michigan and transitions to public school in first grade.

Middle school brought a wave of bullying counterbalanced by her newly found place in the deaf community. Then, she experienced a highly unusual electrode shortage during high school that stole her hearing for more than a month. It’s an event that she remembers “so vividly, just because it was so ...” she catches herself, "not traumatic, but big.” Finally, at age 16, she decided to undergo a second cochlear implant surgery for her other ear. Her dream of becoming an audiologist fueled the decision.

Throughout it all, Nye isn’t afraid to poke fun at herself. Like, for instance, when she reflects on her “awful” singing voice.

Approximately 67,000 American adults and children with hearing loss have at least one cochlear implant, a small electronic device surgically placed near the ear to partially allow hearing.

Nye says that people “don’t really notice” the tan pieces behind each ear, even when she wears her hair up. Her accent isn’t a typical North Carolina drawl, but it betrays her Kalamazoo, Mich., roots far more than her hearing loss. It’s difficult, if not impossible, to pick up hints of a thick “deaf” accent in her speech.

“After moving down to the South, though, and them hearing my Northern accent, I think they tend to get those switched up a bit,” she says, poking fun at Southerners with her trademark smile.

“I think a lot of (people) are surprised, just because it’s a profession that people expect you to have hearing in order to diagnose hearing loss,” she says. “So for someone to find out that I have cochlear implants is surprising, but I also think it’s really uplifting for them to find out. Especially parents who have kids who have hearing loss to be like, ‘Oh, my child can do something that I never thought they could be able to do.’”

But she is quick to point out that her implant is not an instant solution to hearing loss. The sound quality she hears is different than those with natural hearing. She can still have trouble hearing in places with loud background noise, such as restaurants or bars. When she turns off the device, she is deaf.

“So, we can't make somebody's hearing normal, no matter how good these devices are,” says Jackson Roush, a professor in the Division of Speech and Hearing Sciences at UNC-Chapel Hill. “But it enables her to really have a conversation anywhere, anytime, and also to appreciate not just speech but music, environmental sounds and other things that people want to hear in addition to speech.”

Roush met Nye when she was an undergraduate student in his Introduction to Audiology course. He says she’s part of a unique group of twenty-somethings nationwide with cochlear implants.

Roush thinks that Nye is “very perceptive” about maintaining that balance. He thinks that her experience offers a valuable perspective to the audiology program. And, though no two patients are alike, he thinks she will uniquely help the patients with hearing loss she’ll likely serve.

“I see her doing a lot of advocacy stuff, I guess,” her father, Robert, says. “When people start to meet her and see the skill set that she has, the heart that she has, and the passion for what she does, I think she might be doing audiology advocacy and going out and talking and doing presentations ...”

First, she’ll need to make it through UNC-Chapel Hill’s competitive doctorate in udiology program. It’s a four-year program that combines clinical experience, hospital observation and classroom instruction. Nye is not the only member of the cohort with a hearing loss, but she is the only one with cochlear implants. To keep up with class, she uses accommodation devices like CART, a transcription service for class notes and a lavalier microphone that her professors wear.

“I had noticed that, when I put [the microphone] on, my brain works 10 times less hard,” Nye says. “Because when I don't have it, I'm obviously trying to make up for everything that I might miss.”

Growing up, Nye used similar classroom accommodations that drew attention from her peers. She was the only student in her school district with a hearing loss and her classmates called her “robo girl” and “robot” because of her cochlear implant. When she used a Phonak FM microphone system to hear her teachers, the wire connected to the receiver drew attention as well.

“Going into middle school, technology obviously upgraded a little bit,” she says. “So I had a long wire that went down but it connected into my implant. And I got bullied for that really badly, to the point where I told my parents it was broken but it was not.”

When her parents found out about the lie, they made a deal with her. If she could make A’s in all her courses at school, they wouldn’t make her wear the wire.

Nye’s outlook on her hearing loss changed when she found a supportive community at Lions Bear Lake Camp, a Michigan program for deaf and hard-of-hearing students. After attending the camp during the summer before eighth grade, she worked there for years as a counselor.

During one of those early summers, she worked with a 7-year-old student who had a faulty wire on his cochlear implant, that she realized her interest in audiology.

“The supervisor at the time had called me over and was like, 'Hey Alexis, there's something wrong with Rowan's implants. Can you help us find out what it is?' because he had the same implants as I and she didn't quite know about it,” she says. “That's when I knew I wanted to be an audiologist, was working with this cochlear implant and this child.”

Though she is the only one in her immediate family with a hearing loss, Alexis might soon get the chance to foster connection with children like her. She’ll be able to support parents who, like her own, came to the heart-wrenching realization that their sons or daughters were unable to hear.

“I just can’t imagine as a parent of a deaf child, going in and having an audiologist that has been through everything that we’re going through, and hearing that person speak and being able to talk with them because they’ve been through it,” Alexis’ mother, Jodi Nye, says. “That’s going to be huge. She’s going to be able to understand what those parents are going through, and she’s just going to be a great example and a mentor. I’m just excited to see it.”

At Media Hub, students are hand-picked from various concentrations in the UNC School of Media and Journalism to work together to find, produce and market stories with state, regional, and at times, national appeal.

Writer Adrianne Cleven is a senior from Moncure, majoring in reporting and religious studies.

Photographer and videographer Cambria Haro is a senior from Los Angeles,  majoring in broadcast journalism.