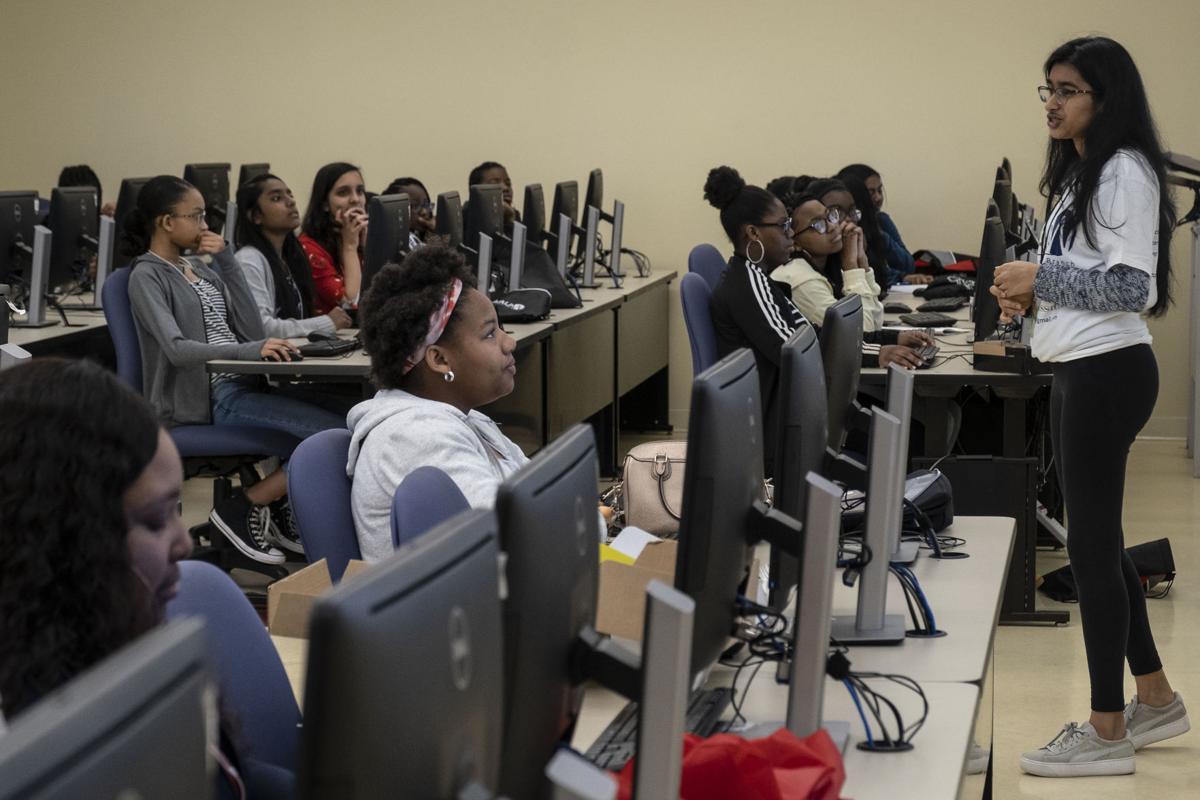 Ambica Ramchandra (right) leads a lecture at Smart Code of Life in March. “(As a girl) I always felt like an outlier,” Ramchandra said. “But one of the goals of SMART is to help eradicate that gender gap in the workforce in the tech field.” 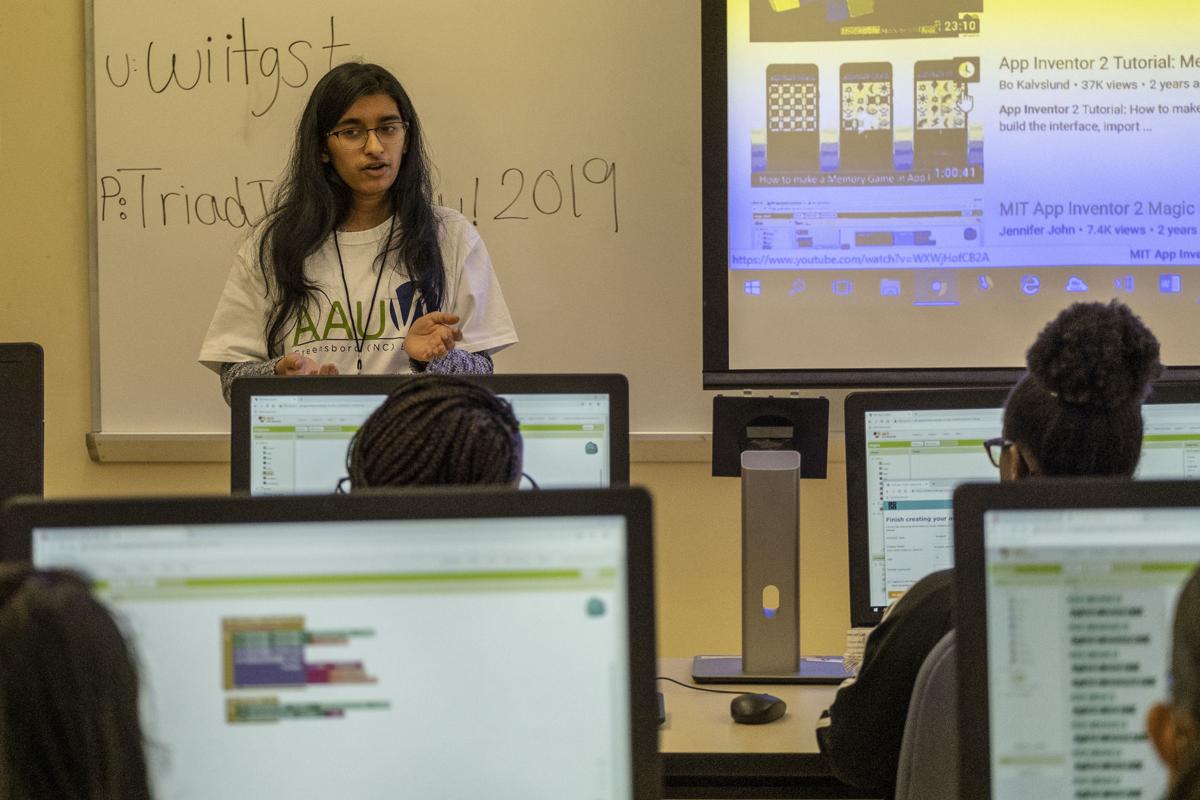 Ambica Ramchandra leads a lecture at Smart Code of Life, a STEM camp she founded, in March at UNCG. The camp covers topics like coding and neuroscience.

Ambica Ramchandra (right) leads a lecture at Smart Code of Life in March. “(As a girl) I always felt like an outlier,” Ramchandra said. “But one of the goals of SMART is to help eradicate that gender gap in the workforce in the tech field.”

Ambica Ramchandra leads a lecture at Smart Code of Life, a STEM camp she founded, in March at UNCG. The camp covers topics like coding and neuroscience.

The girls rummage through boxes of electrical components, laid out on a row of long folding tables in a church hall. They attach some wires to an LED light, a computer fan, small sensors and bring them to life.

“When we connect these pieces together, you create a complete circuit system,” Ambica Ramchandra tells them. “You can then connect this to your computer, your laptop, and through a program, you can code this. You can tell that circuit what to do. If I have a camera attached to my circuit, and it senses a moving object, I can tell it to send a text message to my phone.”

Ramchandra wants to teach the mostly middle school-aged girls more than how to build a rudimentary security system, though. She hopes that a few of them might be inspired to become computer engineers, software designers, innovators.

Ramchandra, 17, is founder of SMART Code of Life, a program with the goal of empowering young women by spurring an interest in science and technology.

Through the program, she has organized workshops throughout the community. Last year, she also hosted a camp for refugee students.

“She has a real drive to not let anyone deter her from her dreams,” said Sharon Lassiter, curriculum facilitator at The STEM Early College at N.C. A&T, from which Ramchandra graduated this year.

“And she encourages other students to have a purpose, have a passion and be committed to serving others,” Lassiter said. “When you have service at the center of what it is you’re doing, then whatever career you’re in, you’re meeting a greater purpose other than just working, than just making money.”

When she was in middle school, Ramchandra attended an information technology camp for girls, which she said “really fortified my love for computer science.” Later on as a high school student, she also became interested in the business aspects of the technology sector.

“At the same time, I had an interest in neuroscience,” she said. “And so I wanted to show how interdisciplinary technology can be with a focus on neuroscience, entrepreneurship and computing.”

She founded SMART during her sophomore year at STEM, and took about a year to develop a curriculum for it.

Those who attend SMART camps and workshops learn about three main topics.

“The first is the Internet of Things (IOT) technology — how you can connect inanimate objects so that they can communicate with each other,” Ramchandra said. “And then we take them into neural networking, how that relates to IOT and robotics. After that we go into the computing portion, which involves this simple software developed by MIT (Massachusetts Institute of Technology) to help students create apps.”

Students also go through a session on entrepreneurship in the science and technology fields. According to a recent report from the National Science Foundation, women in 2016 (the most recent year for which it provides figures) earned only 19% of undergraduate computer science degrees issued in the United States, and only 21% of engineering degrees. Forty-two percent of math and statistics degrees were earned by women.

“I always felt like an outlier,” Ramchandra said. “But one of the goals of SMART is to help eradicate that gender gap in the workforce in the tech field.”

On a Wednesday afternoon in August, she and a 16-year-old assistant, Sanvi Korsapathy, put on a workshop at Garden of Prayer Sovereign Grace Baptist Church on North English Street in Greensboro. Roughly a dozen girls are in the class, which Ramchandra starts out by asking, “Who feels powerful?”

A few raise their hands.

“Well,” she says. “Everyone should feel powerful.”

She asks everyone to introduce themselves, and to “say it loud.”

After the introduction she sets out some LittleBits kits — the boxes of electronic components — and shows the girls how to piece them together.

“When our girls see girls really involved in technology, that makes them think that ‘maybe this is something I can do,’ ” said Brenda Mewborn, executive director for Empowered Girls of North Carolina, who was coordinating the event. “They don’t see that as much as they should.”

Nearby, Ramchandra is shooting a video of a girl talking about how she dealt with a bully, encouraging her to say, “I’m a powerful woman.”

Ramchandra is a freshman at UNC-Chapel Hill, where she said she plans to study economics and computer science, possibly managing a nonprofit after she graduates. She also said she plans to continue SMART in college.

“My assistants are in high school, and they will be expanding it,” she said. “And also, I’d like to try to get some of my peers in college involved in the program. We want girls to continue to feel empowered and be brave enough to venture into things they might be scared of. That’s inspired me to keep moving forward with it.”

What: Code Girls, hosted by SMART Code of Life, for girls ages 8-15