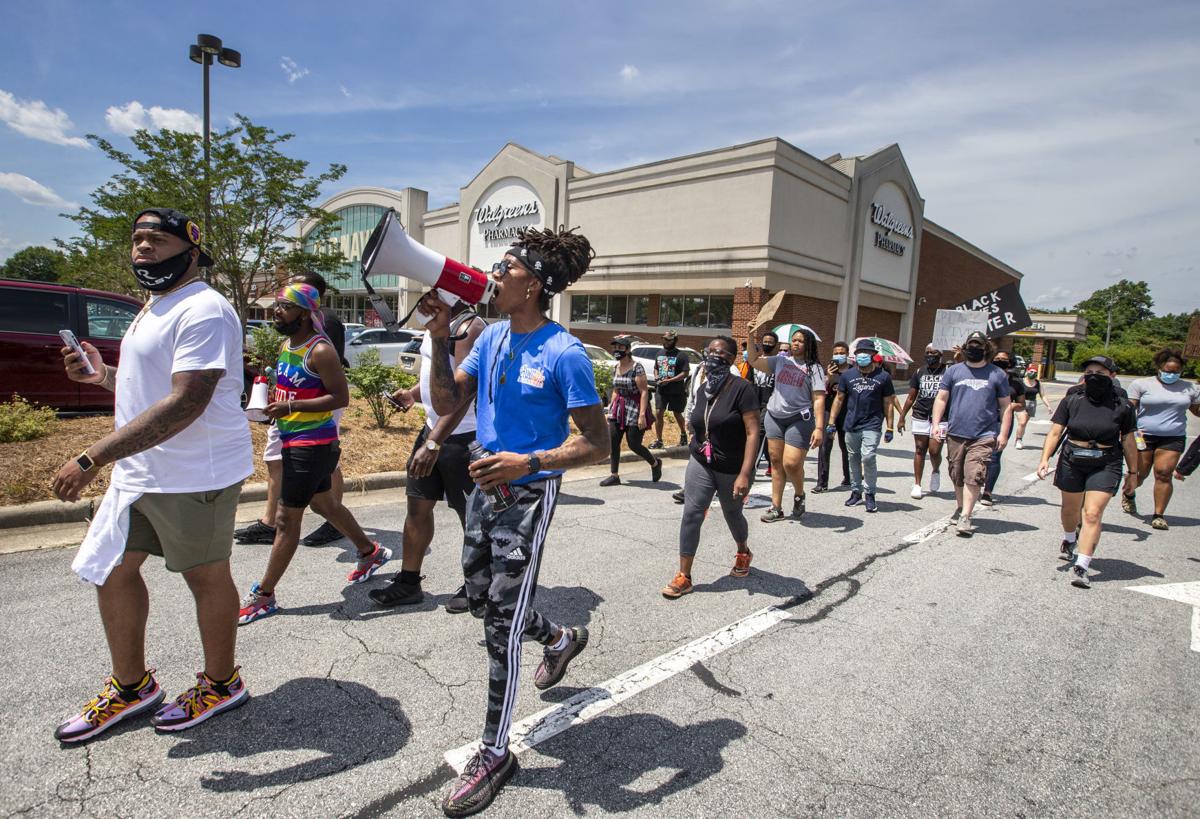 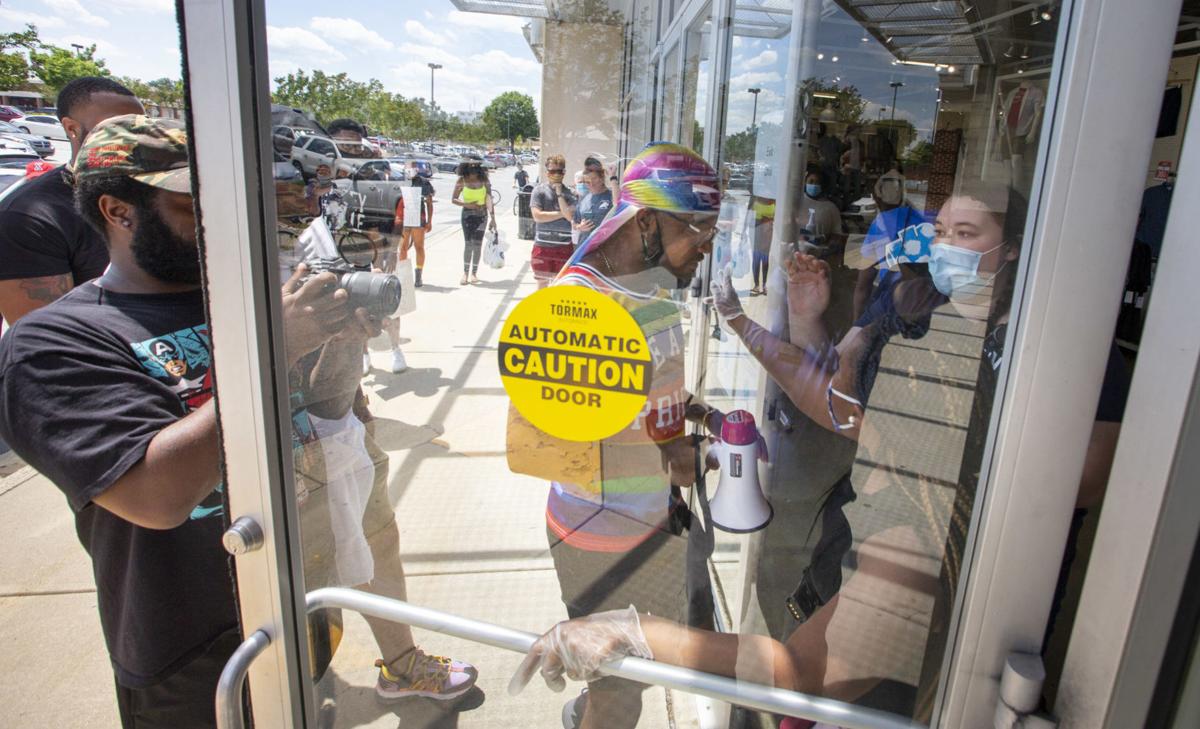 Protesters enter the Old Navy in Friendly Shopping Center in Greensboro, N.C., on Friday, June 26, 2020. Protesters blocked traffic and marched through the shopping center and a few stores. 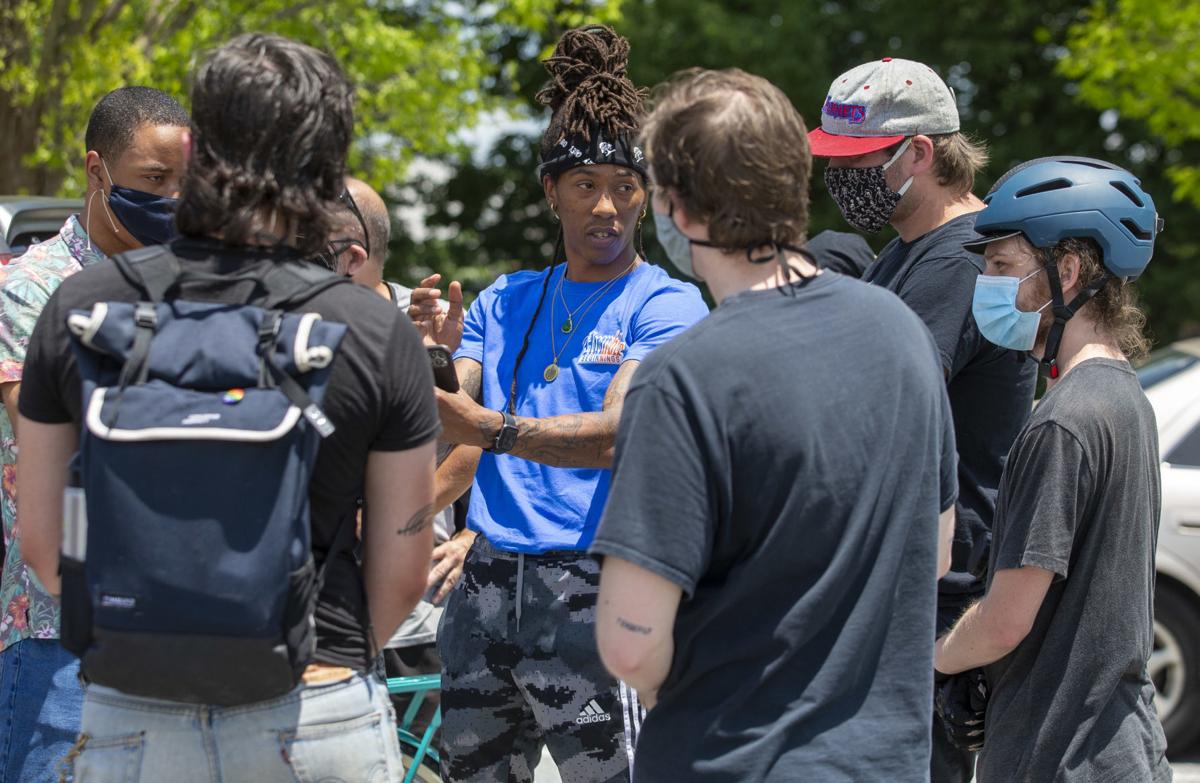 Anthony Morgan II, center, talks with the car drivers and bicycle riders about the march route through Friendly Shopping Center in Greensboro, N.C., on Friday, June 26, 2020.

Protesters enter the Old Navy in Friendly Shopping Center in Greensboro, N.C., on Friday, June 26, 2020. Protesters blocked traffic and marched through the shopping center and a few stores.

Anthony Morgan II, center, talks with the car drivers and bicycle riders about the march route through Friendly Shopping Center in Greensboro, N.C., on Friday, June 26, 2020.

GREENSBORO — Business as usual in Friendly Center was interrupted Friday by a group of Greensboro protesters known for taking over major roads and marching into stores.

“It’s a Black Friday, but ain’t nothing gonna sell,” Anthony Morgan II, spokesperson and organizer of The 3, said into his megaphone, marching down Friendly Avenue.

A group of around 40 protesters cheered behind the 27-year-old Morgan, some carrying “Black Lives Matter” signs and all joining in when the familiar chant of “no justice, no peace” rang out.

The 3, the Greensboro group responsible for several peaceful protests across the city over the past month, called the protest at Friendly Center “Phase V” of their movement.

“And this really is a movement,” Morgan emphasized. “Not just a moment.”

On May 30, Morgan led a peaceful march which marked the first protest in Greensboro after the death of George Floyd, an unarmed Black man whose death in the custody of Minneapolis police on Memorial Day spurred protests across the nation.

Morgan’s crowd swelled all day as protesters marched downtown, blocked intersections on Gate City Boulevard and even shut down a section of Interstate 40.

The following two weekends, the spark Morgan ignited on May 30 continued to grow. Protesters marched peacefully for seven hours during Phase II of The 3’s movement, shutting down a section of Wendover and I-40.

The group even protested inside stores.

“It likes facing your fears,” Morgan said, referring to marching inside of stores. “It’s something that makes everyone have to confront an issue and it’s long overdue. If we don’t confront it, if we don’t come at it aggressively, if we don’t put it in their faces, then they’ll never pay attention to it.”

Phase III on June 13 included a march down Battleground Avenue and more ventures into stores. Protesters sat on the floors of Target, honoring the life of George Floyd with eight minutes and 46 seconds of silence, the same amount of time an officer kneeled on Floyd’s neck in Minneapolis.

The 3 organized a Juneteenth celebration at Douglas Park for Phase IV. Families and children joined the party, which included bounce houses and fireworks. Morgan said it was a celebration, but still a protest.

On Friday afternoon protesters gathered in front of the Regal Grande movie theater at Friendly Center. They came prepared to march and Morgan came with a game plan.

He gathered the group in the parking lot and detailed the path they would take. Roles were assigned. Some would be on bikes, while a handful would drive, leading the way and blocking intersections for the majority of protesters on foot.

“I want to take up all of this space,” Morgan told the group. “I want to hold up this intersection for at least 15 minutes.” He said the goal was to disturb people’s routines, to make them pause and listen.

The group began their peaceful march by heading down Northline Avenue toward Green Valley Road.

“As Black people we’ve been inconvenienced for a long, long, long time,” Morgan said as they marched. Shoppers stuck in traffic caused by the protesters rolled down their car windows to listen. “We’re starting to get real frustrated. It’s really hard for me to stay friendly.”

The group’s first stop was at Old Navy. Morgan made his way into the store, but employees pulled the door closed before more could enter, saying there was a customer limit due to COVID-19 restrictions.

They continued down Northline, blocking the intersection at Green Valley Road. Protesters say they saw a woman holding a gun in her vehicle, but Morgan urged everyone to keep walking.

“Don’t entertain that,” he said. “Don’t walk up on these people’s cars because they’re so scared they might actually shoot us.”

Greensboro police arrived as protesters continued down Green Valley toward Friendly Avenue. Officers with shields formed a line near Pembroke Road, but instead of trying to pass by them, Morgan lit sage and another leader led the group in prayer as they stood in front of the officers.

Shortly before 4 p.m., they marched through parking lots and into Whole Foods. The protesters gathered in front of check out lines while employees and customers paused, some looking concerned, others raising their fists in solidarity.

“People come here and they get extorted every day,” Morgan said into his megaphone. He spoke of the store’s expensive prices and the need for higher pay for employees.

Earlier during the protest, Morgan clarified they don’t march into random stores. They choose ones they can fit a large number of people inside, but also ones they feel aren’t taking care of their workers, ones he says are overcharging.

About 4 p.m., protesters went to Ben & Jerry’s. Outside waiting for them were small cups of ice cream, provided free of charge by the ice cream chain. Morgan said a co-organizer who goes by the name of Chef Dave communicated with Ben & Jerry’s to make it happen.

Chef Dave said he came out to the first protest Morgan organized to give out free food, but ever since then, he’s organized alongside Morgan.

“Just being out there, your emotions get involved,” Chef Dave said. “I really wanted to be a part of it and let my voice be heard.”

After visiting Ben & Jerry’s, the protesters planned to continue marching in the area until around 7 p.m., but Yes Weekly reported police dispersed the group shortly after 5 p.m.

When asked if there would be a Phase VI, Morgan only smiled and winked.

GREENSBORO — They chanted “no justice, no peace” and “I can’t breathe.” They waved “Black Li…

So, can anyone with an issue to protest block traffic and invade stores?

So if I am in my car and they surround me and stop me, that sounds like kidnapping to me. George Floyd’s assailant was arrested and charged. Sounds like the justice system is working. So what are we protesting?

You obviously don't know what kidnapping means, and you clearly haven't been paying attention to anything going on in this country if you don't understand what it is they are protesting.