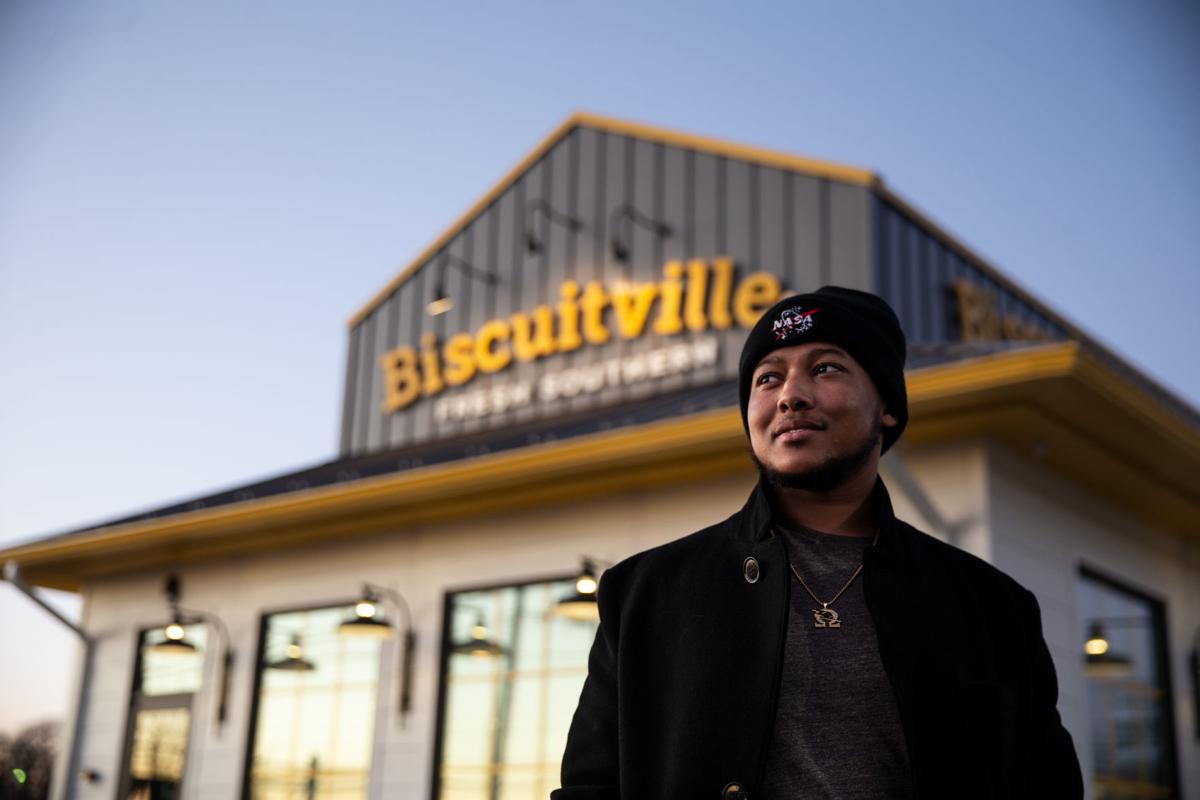 As an abduction attempt played out in front of him, Cody Byrd tried to keep his emotions in check. “I think I initially just wanted to grab him around the neck and keep him from leaving at all costs." 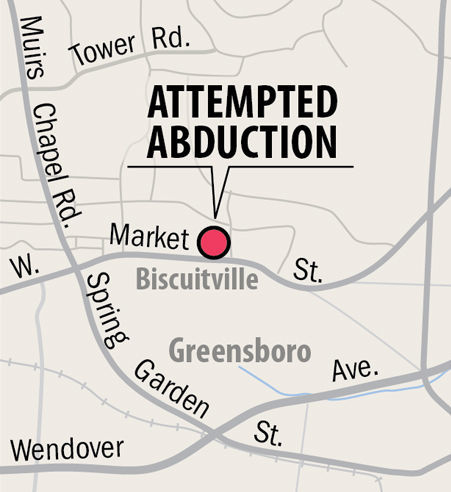 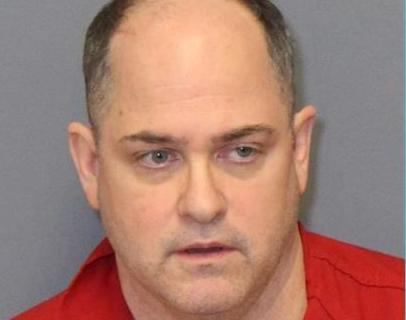 According to court records, Timothy Jon Fry has been previously diagnosed with schizoaffective disorder, a mental health condition that can include symptoms of schizophrenia, such as hallucinations or delusions. 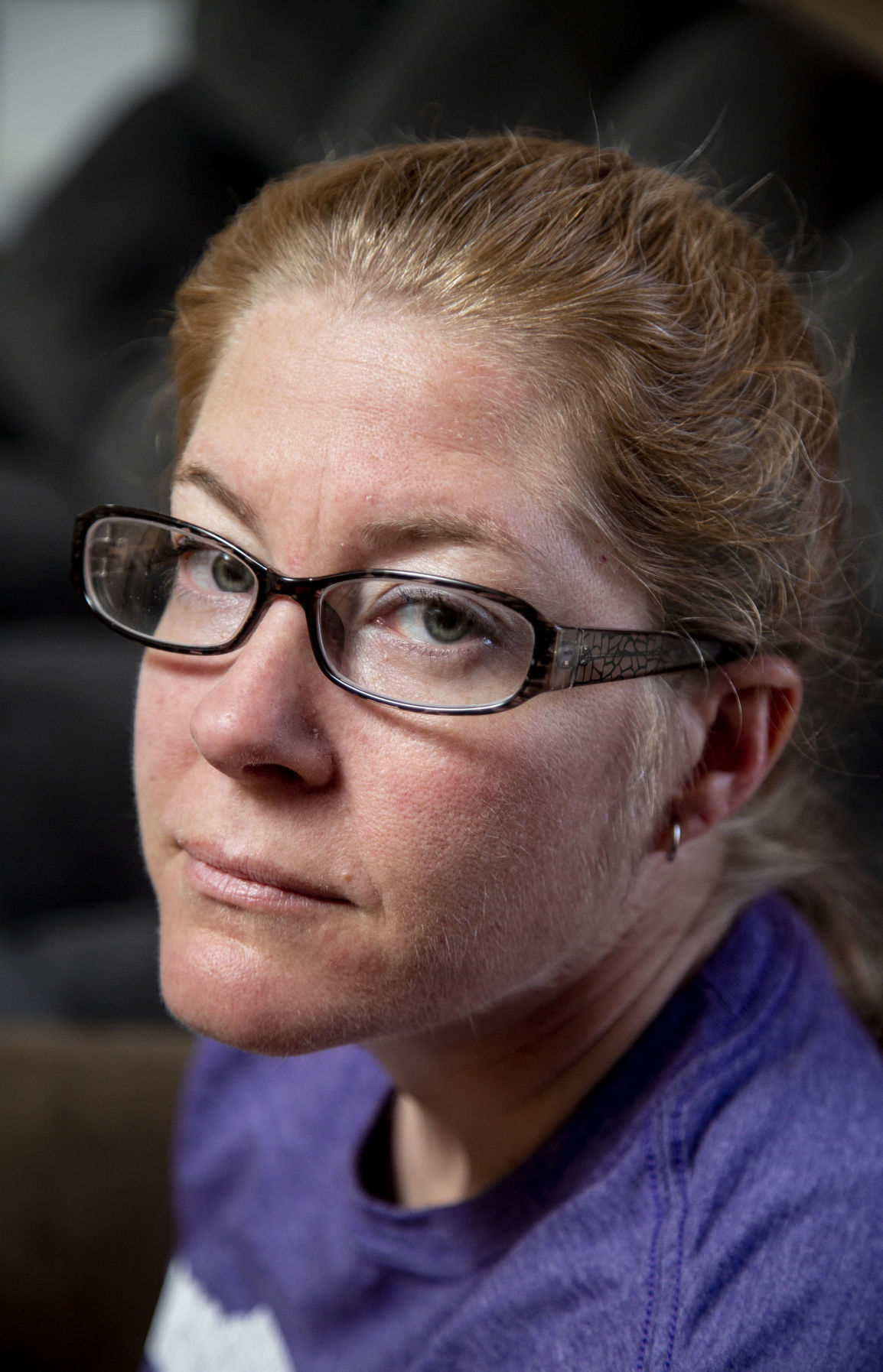 When Heather Owen and her 8-year-old daughter went to a local Biscuitville, she couldn't help but notice a man staring at her child. “He looked angryish. Like someone who was having a bad day.” 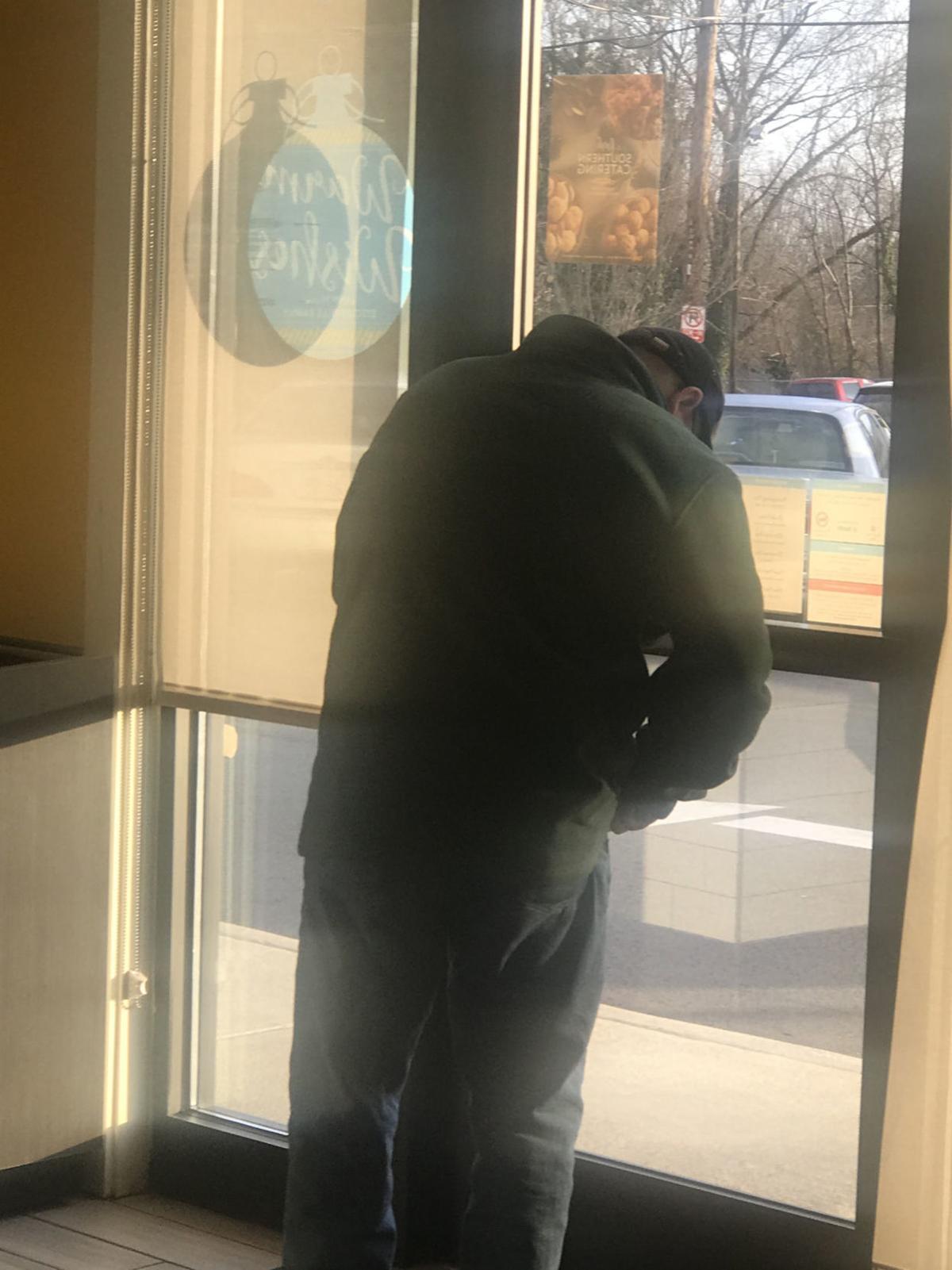 Cody Byrd took this photo of Timothy Jon Fry, who police say tried to kidnap a girl from a Greensboro Biscuitville on Dec. 27.

That’s the emotion Cody Byrd first felt when he realized the man he had just spoken to had apparently tried to kidnap an 8-year-old girl.

The 24-year-old was watching the man hurriedly clean the remnants of his breakfast from a table at the Biscuitville on West Market Street, rushing to leave the restaurant.

Byrd, an N.C. A&T graduate student, had just intervened in an encounter between the girl and the man, whom police later identified as 55-year-old Timothy Jon Fry.

But Byrd didn’t give into that feeling of rage. He took a more measured approach that resulted in police capturing Fry less than an hour later.

The morning of Dec. 27 started out normally, with Byrd stopping at the restaurant for breakfast before heading to his part-time job at Perry J. Brown Funeral Home. While waiting for his food, Byrd noticed Fry sitting and staring at the little girl one table over.

“He just kept staring at her and ... it just gave me this weird feeling,” Byrd recalled. “She was just sitting there peacefully ... playing with her dolls.”

Fry kept staring, even as the girl got up to get her and her mother’s food when it was ready, Byrd said.

“He looked angryish,” she recalled during an interview Wednesday. “Like someone who was having a bad day.”

Fry had his arms crossed. Owen noticed he was wearing fingernail polish. Despite her uneasiness, she didn’t want to jump to conclusions that he was dangerous.

“You don’t want to feel that way because people misjudge people all the time,” Owen said.

When her daughter wanted to go to the bathroom, just around the corner in the small restaurant, Owen offered to go with her.

“She said, ‘I’m OK,” Owen said. So Owen told her daughter she would stand at the corner, keeping an eye on her and the table.

Owen wasn’t too worried. It was a single-person bathroom.

“We’re comfortable there,” she said of the restaurant she and her daughter often visited. “People there know us.”

Still, Owen noticed Fry standing outside of the restroom doors.

“Thought maybe somebody was in the bathroom” and he was waiting, Owen remembered thinking at the time.

Meanwhile, Byrd, who was suspicious when Fry followed the girl into the hallway, asked Fry if he was waiting for the bathroom. “And when he said, ‘Oh, no. You go ahead.’ ... That’s when it kind of rang that, OK, something's not right.”

That left Byrd in a quandary. He didn’t want to go all the way into the men's room, fearing he wouldn’t get out in time if Fry was up to no good.

He proceeded into the bathroom.

“So it was just a stroke of luck because as soon as I stepped in, I was kind of looking at the mirror, pretending I was going to use the bathroom. I heard the door open for the women’s bathroom and that’s when I stepped back out and I noticed him trying to grab her,” Byrd said.

The girl dodged Fry “and let out this little yelp and ran off,” Byrd said.

Byrd doesn’t recall if Fry said "yes" or "no." But he does remember Fry saying “something like he was trying to send a message."

“I’m still not sure what he meant by that,” Byrd said.

Byrd returned to the table where the mother and now sobbing girl were sitting and asked Owen if she knew the man.

That’s when Fry returned, feverishly clearing his table and getting ready to leave, Byrd said.

“At that moment, I was feeling a rage, like adrenaline rushing,” admitted Byrd, a software engineering student. “I think I initially just wanted to grab him around the neck and keep him from leaving at all costs."

He quickly thought it through.

“If I do that, this is going to blow up way bigger than it needs to be ... I was just thinking like I don’t know how that’s going to play out. Is he going to try to say, ‘Oh, he assaulted me.’”

The fact that he was a young, black man factored into his thoughts.

“That was kind of in the back of my head,” he said.

Both Owen and Byrd said police responded inside of five minutes.

After talking with an officer, Byrd headed to work.

But before he left, he got a big hug from Owen.

“I gave him the biggest hug in the whole world,” she said.

Officers stopped Fry’s truck a short time later in the area of Market and Tate streets.

Police asked Byrd to leave work and see if he could identify Fry. Byrd said he recognized his face and his truck, but told officers to check his fingernails.

He painted his fingernails “like rainbow colors, so it was like a different color for each day of the week,” Byrd said.

Fry was arrested and charged with kidnapping and taking indecent liberties with a child. He is in the Guilford County jail on a $300,000 secured bail.

Fry admitted to an officer that he intended to kidnap the child and found her sexually attractive, according to court documents. Owen said he slapped her daughter on the bottom before she got away.

According to court records, Fry has been previously diagnosed with schizoaffective disorder, a mental health condition that can include symptoms of schizophrenia, such as hallucinations or delusions, as well as mania and depression.

A judge has signed off on an order for a mental evaluation to determine Fry's competency to stand trial.

Fry’s public defender, Wayne Baucino, said he has met with his client but that “we’re still in the early stages of this investigation. Hopefully people will reserve judgment until the investigation is complete.”

Baucino would not comment on his client’s mental condition.

As for the little girl, Owen said the 8-year-old is "her sweet little spunky self. She doesn’t seem to understand what this man’s intentions were."

“The gentlemen who stepped up and assisted in this prevented a far worse incident from happening,” he said. “He was willing to help out and was able to act quickly enough to take photos and get this gentlemen apprehended in a short amount of time.”

It read in part: “Biscuitville takes the safety of our guests very seriously. ... While we can’t always control the actions of others, it is critical that businesses, communities and neighbors play an active role in reporting and reacting to suspicious activity. We join Ms. Owen in being extremely grateful to the good samaritan at Biscuitville who stepped up to address the situation.”

Charlotte Byrd said she’s proud of her son. But his actions also gave her pause.

“I was glad that he saved the girl, but then I was ‘Oh, man. What if that man had a gun or a knife?” she said.

She describes her son as humble and laid back, but always observant.

“He’s pretty much always been aware of his surroundings, even as a small child,” she said. “I’m proud of the man he became. He’s still my baby, but I look at him as a man now.”

Dr. Clay Gloster Jr., dean of the graduate college at A&T, met Byrd while a guest speaker at his church, Metropolitan United Methodist Church. He encouraged him to come to his office to talk about getting his master's degree.

It surprised him when Byrd showed up.

“He seemed to be motivated. I think in higher ed, we can’t teach motivation. Motivation and grit are things that are unique to him,” Gloster said.

Reflecting on the situation, Byrd said: “You never think you’ll find yourself in one of those situations, so when it does happen it’s like an initial shock — pushed into a fight or flight situation. What are you going to do? How are you going to react?

Previous versions of this article did not fully identify Ron Glenn, spokesman for the Greensboro Police Department.

Greensboro restaurant among Yelp's 'best places to eat' in the U.S.

French-inspired Chez Genese in Greensboro is among Yelp's top 100 places to eat in the country.

“Cody Byrd is the epitome of vigilance, selflessness and courage. He did not cower in the face of danger; he acted quickly to keep a complete stranger out of harm’s way,” U.S. Rep. Mark Walker said in a release announcing Byrd as the "Sixth District Community Hero of the Month" for January.

GREENSBORO — The N.C. A&T graduate student who helped prevent a little girl's kidnapping at a Greensboro Biscuitville in December was reco…

GREENSBORO — A restaurant patron foiled the possible kidnapping of an 8-year-old girl at a fast-food restaurant in late December, Greensboro p…

We need more Cody Byrds in the world. I heard a man I respect greatly call people like Cody "everyday heroes. Thank you, Cody, for your wisdom and courage looking after your "neighbors." You're a fine man!

So glad Mr. Byrd stepped in. Fry's actions were reprehensible to be sure, but it seems like a violation of his privacy to report details of his his medical diagnosis in the newspaper.