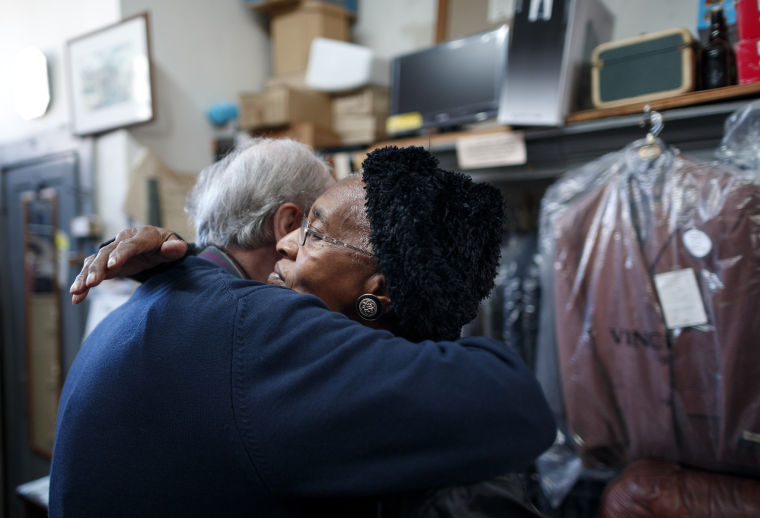 John Mitchell hugs Clara Henderson after she came by the shop to receive Christmas gifts from John and Ellen who are long-time friends. Henderson's husband, Melvin Henderson, passed away this year. 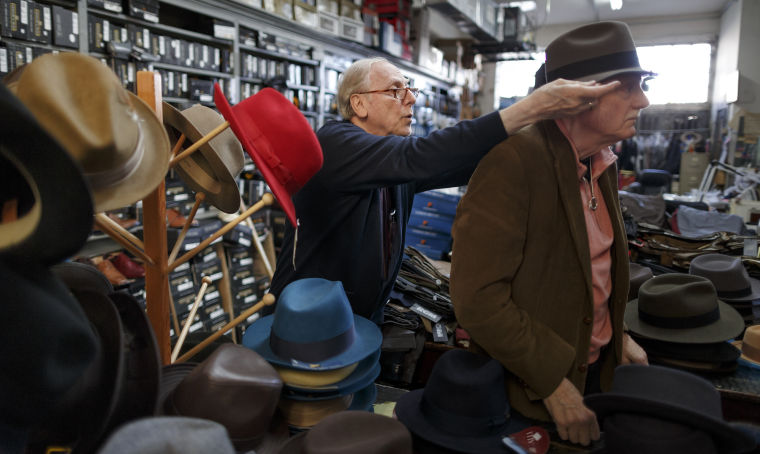 Mitchell's Shoes and Clothing owner John Mitchell assists customer Roget Berendes with the purchase of a hat earlier this month. 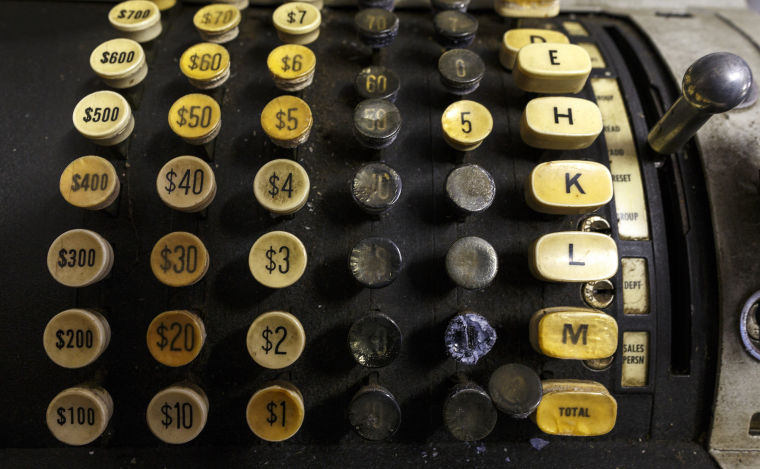 John Mitchell still has an old adding machine from the 1950's in the corner of his shop on East Market Street in Greensboro. 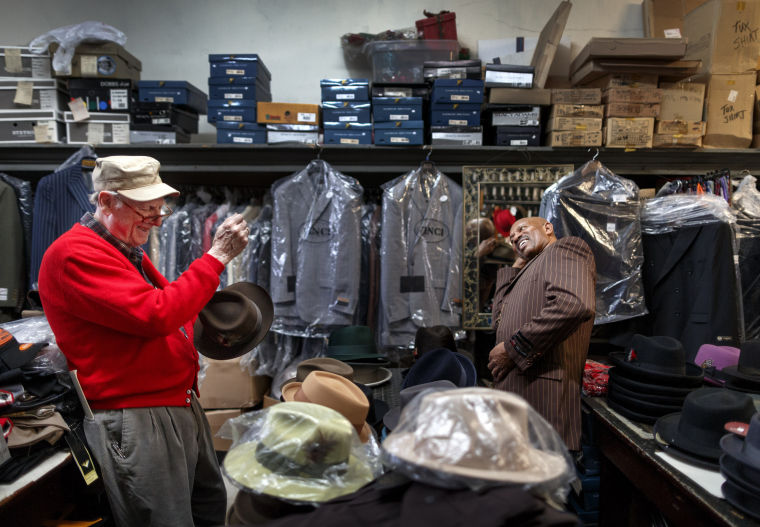 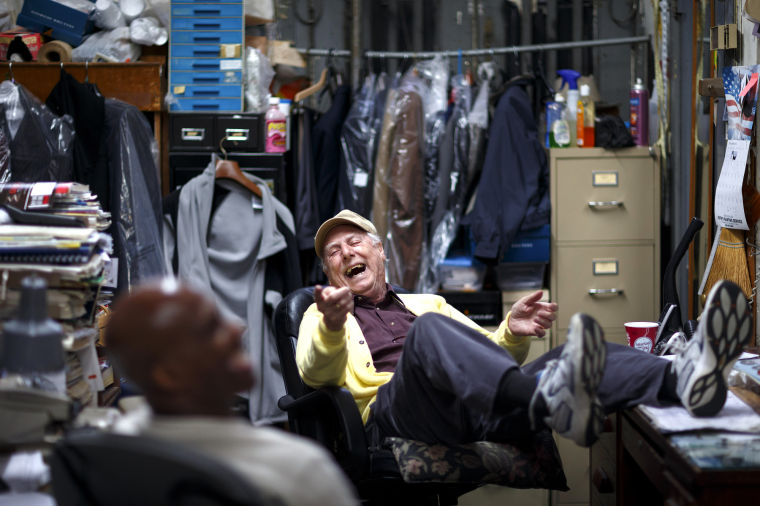 John Mitchell shares stories with a friend earlier this month in his store on East Market Street in Greensboro.

John Mitchell hugs Clara Henderson after she came by the shop to receive Christmas gifts from John and Ellen who are long-time friends. Henderson's husband, Melvin Henderson, passed away this year.

Mitchell's Shoes and Clothing owner John Mitchell assists customer Roget Berendes with the purchase of a hat earlier this month.

John Mitchell still has an old adding machine from the 1950's in the corner of his shop on East Market Street in Greensboro.

John Mitchell shares stories with a friend earlier this month in his store on East Market Street in Greensboro.

John Mitchell wants to sell you a hat by the time the bells jingle on the front door of his store.

But more than that, he wants to banter with you. And if you’re an old-time customer, you’ll probably want to do the same because John Mitchell is the mayor of East Market Street.

He’s been there since age 11. And now, he’s 85. Except for a two-year stint in the Army right after World War II, he has worked in the very same spot he works today — a 20-by-60 foot store known as Mitchell’s Shoes & Clothing, a small storefront about three train cars west of the railroad tracks crossing East Market Street.

In 1939, John’s uncle and his father both ran clothing stores in downtown Greensboro. His dad, Joe, took over the store from his brother-in-law in 1941. Joe specialized in selling work clothes for those with manufacturing and mill jobs.

After John took over the store in 1962, he changed its direction and stocked shoes, shirts, slacks, sweaters and suits.

During the 1970s, Mitchell stocked his store with what he calls “high-style” dress clothes — wide-collar shirts, that would look good with gold chains, and bell-bottom rayon slacks — because of the success of “She’s A Lady,” a 1971 song performed by Tom Jones.

That song, Mitchell says, helped him sell thousands of shirts and bell-bottom pants. Back then, he took a gamble on the bell-bottom pants when no other store in Greensboro would stock them. The pants sold faster than the store could hem their overgrown openings.

The memory of hemming all those pants by hand makes Mitchell’s wife, Ellen, smile.

Mitchell is no stranger to hard work. One minute, he’s on his knees to measure the length of a customer’s new pants; the next, he’s jumping off the floor to replace a hat on the shelf.

It’s that simple kind of harmony Mitchell likes on East Market Street. He’s done it for the past seven decades.

Mitchell takes a break as he leans up against a table full of pants. The table creaks and leans back a couple of inches seemingly in synch with him as he recounts his childhood.

He sold Liberty magazine door to door at age 6. He sold newspapers in Greensboro’s Fisher Park neighborhood in the mornings and afternoons. He sold peanuts for 10 cents a box at War Memorial Stadium during baseball games when he wasn’t mowing yards for 15 cents in and around his home off Chestnut Street in Greensboro.

Then, at 11, he started working in the store for his uncle and then his dad.

Now, Mitchell says, “I am a one-man operation, and at my age, I don’t want new customers.’’

On his shelves, you can find items stocked in the 1940s. It gives you the sense of stepping back in time.

All of Mitchell’s merchandise give you the idea that this store is his professional — and personal — museum.

Customers come to see Mitchell’s Stacy Adams shoe collection. The Madison model high-top shoe, almost unchanged in style since 1870, even brings customers in from out of state for the quality and the price — $89.98 a pair.

And customers come to see his collection of felt hats. When they do, they stand beside a big table full of hats with wide brims, narrow “stingy” brims, and normal brims in all shades of brown and gray and even red and blue.

But many times, customers come to see Mitchell. They come for his stories, jokes and his no-nonsense knowledge of men’s clothing.

They also know Ellen’s seal of approval on colors means the purchase will pass the “wife test” when they get home. Customers have come to trust him for what Mitchell calls a “good merchandise at a good price with a good fit.”

“I stand behind my merchandise,” he says.

Ask him about that, and he tells you — with a laugh — the story of a saxophone player for the Turner Brothers Quartet.

It was the 1970s, and the sax player for the Turner Brothers perspired so much during a concert his crepe shirt shrunk after every song.

“He was a big guy with a stomach, and every time he would stand to play, his shirt would shrink a little bit more,’’ John says. “And when he brought it in, it was about as short as it was wide.”

He got a new shirt.

Mitchell is not really against new customers. But he doesn’t appreciate what he calls “tire-kickers,” customers who come in and never buy anything. New customers are simply tolerated. But longtime customers are embraced.

“I am open because of my friends,” he says matter-of-factly, admitting that many of them would not venture to visit him at his home.

Mitchell is frustrated with his shoe suppliers ending production of some of his most popular shoes on the shelves. Stand there long enough with Mitchell, and you’ll hear him say to one of his loyal customers, “I am not going to be able get any more of these.”

That happened one day with Mitchell’s Giorgio Brutini ankle boots, and a customer he’s known for a long time — country music performer Billy “Crash’’ Craddock, one of the most famous musicians to come out of Greensboro.

Craddock buys the last pair of Giorgio Brutini ankle boots his size on the shelf.

But just as Mitchell’s product lines keep fading away, so do his customers.

John’s lament from earlier in the day — “A lot of my customers are dead” — rings true as the two friends discuss the funeral for another friend that was held a few days earlier.

After Craddock zips his boots and haggles, to no avail, over the price, John is on to a new challenge: replacing a hat eaten by a poodle.

His friend, Roget Berendes, needs a hat to replace the one his poodle ate. So, John helps him with brim and size advice and gives him time and space to try on a few hats. He doesn’t even get excited when Berendes, in what may have been a moment of weakness, checks out how he looks wearing a red hat. Berendes finally moves on to a dark gray $59.98 hat that matches his corduroy jacket. Mitchell picks up another hat, in the same color, that costs $118.

“It fits your face,’’ Mitchell says, trying to make a sale, but speaking the truth.

Berendes agrees with his credit card. The new owner, crowned with his poodle’s next target, gets a pat on the back on his way out.