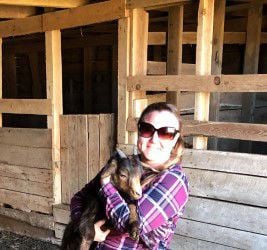 Crystal Kyle, whose doctorate is in agricultural leadership, has farmed crops, goats and chickens on land outside Greensboro. Her main research interest is in helping farmers with disabilities, and veterans who are interested in farming and staying active and productive. 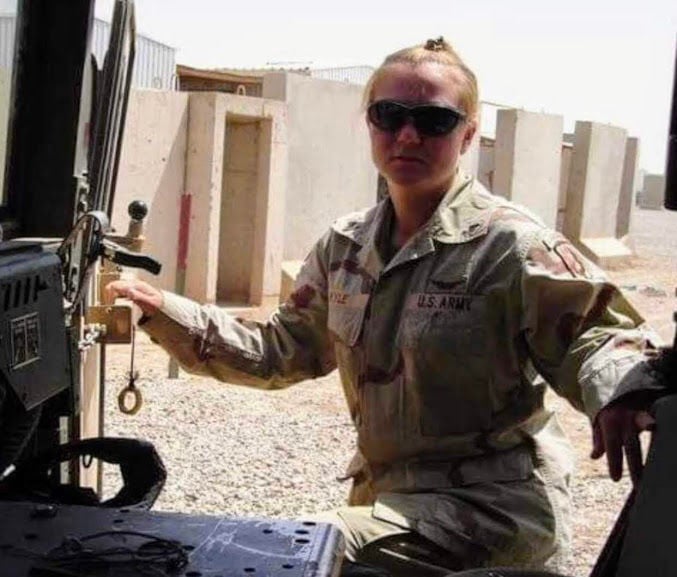 After 10 years in the U.S. Army, including time in Iraq and Afghanistan, Crystal Kyle emerged with PTSD and a traumatic brain injury. Getting involved with agriculture helped her heal.

Crystal Kyle, whose doctorate is in agricultural leadership, has farmed crops, goats and chickens on land outside Greensboro. Her main research interest is in helping farmers with disabilities, and veterans who are interested in farming and staying active and productive.

After 10 years in the U.S. Army, including time in Iraq and Afghanistan, Crystal Kyle emerged with PTSD and a traumatic brain injury. Getting involved with agriculture helped her heal.

GREENSBORO — When Crystal Kyle joined the Army, she found meaningful work, an active lifestyle and a cause she could believe in.

Twelve years later, upon leaving the service, she found a second career in another field with similar benefits: agriculture. Although it seemed like an unlikely combination, Kyle — who had no farming background — found a field full of veterans with whom she could relate and identify.

“There are lots of parallels between farming and veterans, especially in North Carolina, where agriculture is the largest employment sector in the state, followed by the military,” Kyle says. “Many veterans come from farming or rural backgrounds, and farmers connect with me because of our shared experiences.

“Farming is patriotic. It’s an investment in the land that our soldiers defend. It ensures our country’s safety by maintaining food security.”

Born and educated in Greensboro, Kyle recently took a job with the U.S. Department of Agriculture’s National Institute for Food and Agriculture in Missouri as a biological science specialist, helping farmers and veterans who are interested in finding their way in farming. For the past two years, she worked for N.C. A&T’s Cooperative Extension program as the coordinator for the N.C. Agromedicine Institute. She was also the director of North Carolina’s chapter of the AgrAbility program, a national program funded by the USDA to provide disabled people with the education and assistance they need to live successful, safe, productive lives in production agriculture or agriculture-related occupations.

“I research farmers’ mental health with a focus on veterans,” she says. “All the things I felt personally show up in the data: being a part of the farming community can be a bridge to rejoining the civilian community. In that community, you have something to talk about besides where you’ve been and what you’ve seen as a soldier. You’re not a stereotype, you’re a functioning, productive community member, and that improves your mental health to the point that you can actually rejoin the community. I understand that, because I’ve been there.”

From Army to agricultureAs a high school senior, Kyle knew that her family didn’t have the money to pay for college. So, like many other 17-year-olds, she joined the Army to gain skills, earn education benefits and make a living.

After 10 years and tours in both Afghanistan and Iraq, she left the Army in 2006 as an E5 sergeant, an avionics electrician working on heavy-lifting CH47 Chinook helicopters. She had three daughters, an ex-husband, a GI Bill for college and a desire to do something meaningful.

But in addition to rank and skills, she had another lingering effect of her military experiences: post-traumatic stress disorder, the mental health condition characterized by anxiety and flashbacks after experiencing or witnessing traumatic events.

“I wanted to be stationed in Hawaii. Instead, I went to Afghanistan and then Iraq,” Kyle says. “Each time, I left my daughter with my mom and shipped out. When I came back from Iraq, my 6 month old didn’t recognize me.

“I dealt with all the emotions that come with war, and seeing all the things that come with it. I had received a traumatic brain injury in Iraq, and I had pretty extreme PTSD, although I wouldn’t have admitted it. I left the Army because my youngest daughter was born prematurely; I probably would have stayed 20 years if not for that.”

Now the divorced mom of three, Kyle started classes at GTCC, working on an associate’s degree. But the transition to civilian life was hard; interacting with her family was difficult, nightmares were constant, and working in an office environment seemed tedious and inconsequential.

One day, representatives from A&T’s College of Agriculture and Environmental Sciences visited GTCC to speak about the college’s programs.

“I had no experience with farming. I thought chicken came from the store,” she said. “But my professor suggested that I check it out.”

While working in the college’s soil lab — “I liked it because I didn’t have to talk to anyone,” Kyle said — one of the soil science professors approached her for help with a project at the 492-acre University Farm.

“Being outside, planting, harvesting, getting dirty,” she says. “You’re not behind a desk, you’re doing something active. You don’t have to answer questions or think about what’s wrong with you. You get all the positive benefits of exercise and working with things that are growing and responding to your care. Life is starting, not just being destroyed.”

As Kyle struggled to adjust to civilian life, she found agriculture comforting and meaningful, and similar to the military in ways that were reassuring. Both require “uniforms” of boots and coveralls, special gear, hard work and heavy equipment. There was also the relief of being in the wide-open spaces that a farm provides, where she could hear and see for miles.

Digging in dirt is literally good for mental health, she found out; the natural antidepressants in soil microbes have been shown to positively change the makeup of the brain.

As she spent time on the farm, the PTSD and the nightmares began to recede slightly, and Kyle began to interact with her family again. She also began to develop her interest in agriculture as a career.

Guided by professors who helped her navigate the programs, Kyle received her bachelor’s degree in earth and environmental science and master’s in agricultural education from A&T and a doctorate in agricultural leadership and community education from Virginia Tech. As she worked through the coursework, she came to realize that other veterans were also having similar, positive experiences to the ones she had.

She began to study the needs of farmers and veteran farmers, and how farming — one of the nation’s most dangerous occupations, according to the U.S. Bureau of Labor Statistics — can be accomplished more safely. In 2019, she applied for a grant to renew North Carolina’s AgrAbility program, hiring a team of four who help screen, create and deliver assists, from hearing aids to adaptive tools to workshops, to farmers and veterans across the state, to help them stay safe while remaining productive.

“Depression is a snowball, and you feel so isolated,” she says. “On a farm, you are engaged with your surroundings, you get the benefits of interacting, of seeing life begin. For someone who has served in combat, there’s a great relief in a secure food supply and the sense of being a part of a community, just like you were in the military.”

The sense of security and community that agriculture provides is evident in times like the current pandemic, which has seen an increase in backyard gardening, Kyle says.

“Even a small garden gives you the peace of mind of having food, in addition to the mental benefits of being outside and getting physical activity,” she says. “But it also creates community. You have extra food, so you share with your neighbors. Then, they’ll want to give back, so they share with you, or maybe they check to make sure you have groceries. That all promotes security.”

Kyle, whose family lives in Greensboro and High Point, has raised meat goats, chickens and crops, but mainly focuses on her research, home schooling her children and the joy of helping farmers and veterans find a peaceful space and something to build on.

“In coming back to the land, I was able to leverage what I’d learned in the military into a rich, useful civilian career,” she says. “All veterans should be able to experience that.”