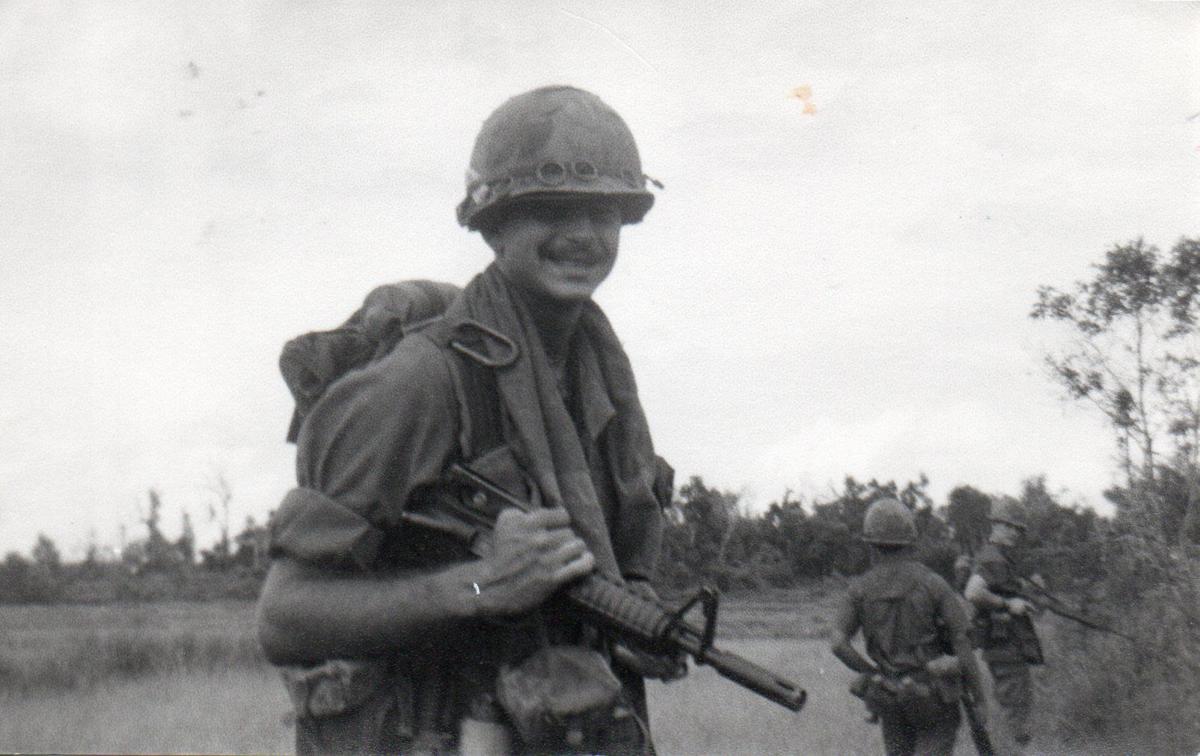 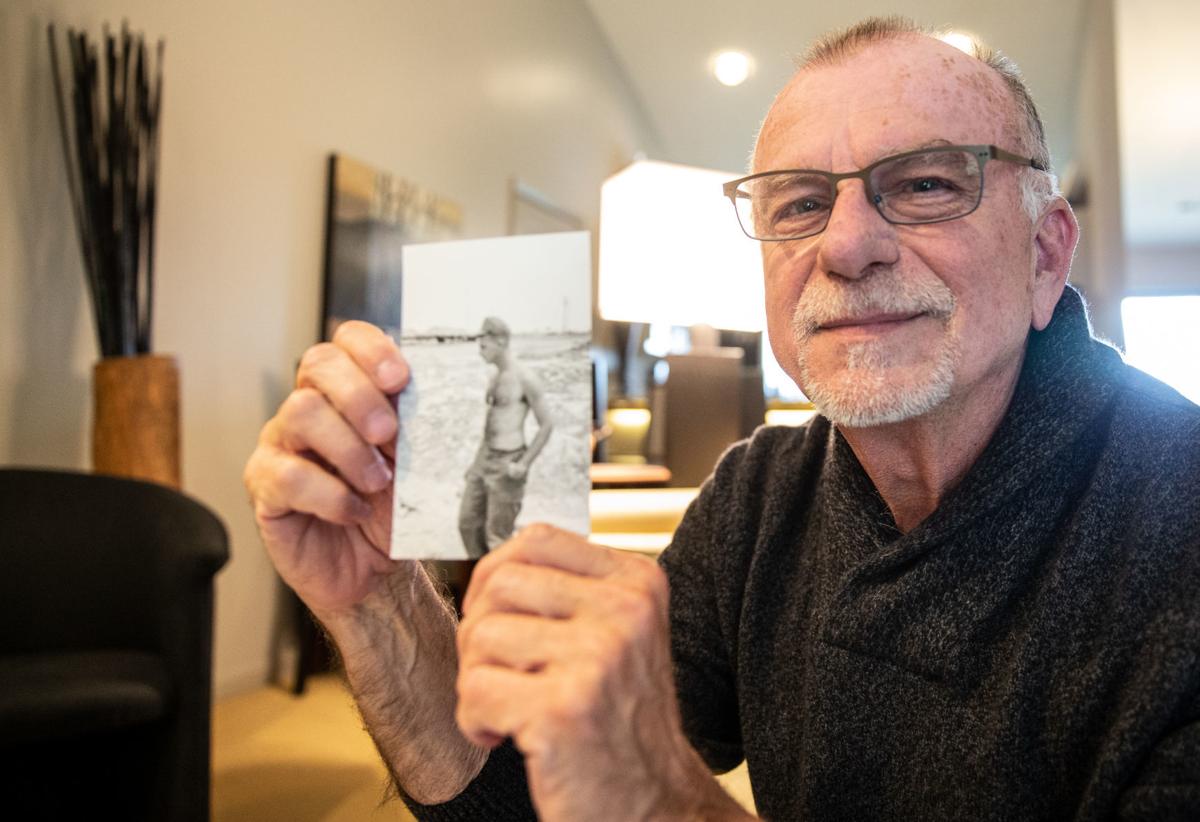 Allen Broach poses displays a photo of himself during his Vietnam service. “Vietnam made my life easier to some degree,” he said. “Nobody has tried to kill me for doing a bad ad. They don’t throw hand grenades for a bad marketing plan.”

Allen Broach poses displays a photo of himself during his Vietnam service. “Vietnam made my life easier to some degree,” he said. “Nobody has tried to kill me for doing a bad ad. They don’t throw hand grenades for a bad marketing plan.”

GREENSBORO — All these years, and we had no idea.

Allen Broach, one of Greensboro’s best-known and most-loved residents, has carried this … burden? Is that the right word? The 72-year-old would never describe it that way. Implies too much martyrdom. It was, after all, what we expected from young men back in the day.

So let’s call it a weight. For 50 years, he has carried the weight of his service during the Vietnam War, when he was Sgt. James Allen Broach — Troop D Air, ¼ Cavalry (Quarter Cav), 1st Infantry Division, U.S. Army.

That weight was with him at Broach and Co., the successful ad agency he created and ran on South Elm Street for 30 years.

It was with him at the Broach Theatre, the theater company David Bell, Hall Parish and Stephen Gee founded and named after him.

And it was with him at countless charitable events, where he donated hundreds of thousands of dollars to the arts and other social causes.

It was there all along. Only we didn’t know it.

In 1969, Broach was 22, the wise old man in his 28-man platoon. He spent 12 months in-country — seven in the field, one in the hospital healing from wounds, the others divided between desk duty and sneaking back to the field.

He shot. Was shot. Threw grenades. Had grenades thrown at him. Took shrapnel from head to toe from a rocket-propelled grenade which he still carries today. Saw body parts lying in the mud. Listened to the cries of teenage boys, his buddies, as they lay wounded or dying.

He woke up each day believing it would be his last.

By some miracle, none of them were. Broach brought home three medals for spending more than 300 hours in the air, two Purple Hearts and two Bronze Stars — one for meritorious service and another for valor.

And the weight. Forever that weight.

He had a chance to get away scot-free. Two chances, really, never to set foot in southeast Asia.

His dad’s cousin, an Army colonel at Fort Bragg, offered to let him drive a Jeep stateside. And his uncle, a battalion commander in the National Guard, said he could get him an equally sweet gig.

The North Wilkesboro native declined both deals. Was it nobility? Love of country? Broach’s reasoning was more practical. Enlisting in the Army meant he’d be out in two years. Besides, he read that the odds of a soldier dying in Vietnam were just 1 in 100.

He liked his chances.

Turns out his safety was far from guaranteed. Broach was assigned to a special reconnaissance unit — an airborne rifle platoon. One of only two of its kind, its job was to provoke attacks from Viet Cong soldiers, then radio the enemy’s location back to the air company.

Each dawn, helicopters would search the fields, especially along the river banks for enemy movement or camps. If they spotted any, he and his platoon would assess the situation from the ground — and either handle it or start a firefight.

Broach was the leader.

Did he kill anyone? Hard to know — firing into that lush, green jungle like they all did so early in the morning. He never saw an enemy soldier take his fire. That brings him comfort.

Oddly, his most severe injuries happened on terra firma. The first was in a Viet Cong bunker, when he found himself staring down the barrel of a rifle and hearing the trigger click thrice. The rifle jammed, but fragments of shotgun shells bloodied Broach’s face and arms. The close-range blasts gave him a concussion so painful he wondered whether the gun really had fired. When he wiped his face, there was so much blood he thought his head had been opened.

Then there was Sept. 7, 1969. We don’t mark it each year, like Pearl Harbor Day. But for the surviving men of his platoon, the date certainly lives in infamy.

A Vietnamese scout tripped a mine in the middle of an enemy base camp, killing him instantly and injuring many men — but not Broach. After 30 minutes, Broach called in a medivac unit, thinking the coast was clear. As he flagged the chopper to land, a rocket-propelled grenade hit about six feet behind him.

The force threw his shrapnel-riddled body into the air and into the helicopter. He and his platoonmates laid on the ground for three hours as Vietnamese troops tossed hand grenades at them.

By the time help arrived, 21 of 28 members of the platoon were dead or injured. Broach spent more than a month in the hospital after multiple surgeries.

He has never stopped to tally how many friends and acquaintances died during his year there.

There’s no way around this next part. Broach lost himself for a while after he returned to the States.

We didn’t call it PTSD back then, but that’s surely what ailed Broach. Oh, he’ll tell us his symptoms weren’t that bad. Not like some men who drank away the pain, or like his friend who wound up in an institution — David, after whom Broach named his older son.

But he was restless. Distracted. Jumpy. Isolated.

“We came back, and we were supposed to go out and start our lives again.

“We were told to heal ourselves. No, we weren’t even told that. We were told, ‘You’re out of the Army now.’”

What was he supposed to do? Start a career? Doing what? Last job he had, someone pointed a rifle six inches from his head, pulled the trigger — once, twice, three times — only for it to jam. Where does that go on a resume?

So he sought comfort in the familiar. He brought his then-wife back home to the conservative foothills of Wilkes County, where a Vietnam vet never had to fear getting spit on by anti-war protesters.

He found a job through friends. It was manual labor — working in the cutting department at a hosiery mill — but it paid the bills. Rotary and Ruritan clubs asked him to speak, and maybe even bring some of the thousands of photos of Vietnam he shot from the ground and in the air.

He fathered David, then Derik. He landed a job, a good job, in the marketing department of the now-defunct American Drew Furniture in downtown North Wilkesboro, the launchpad for four decades as an ad man with his own shop in Greensboro.

“You either go on or you don’t is what it boils down to,” he said.

Broach wants us to know he has no regrets. Certainly not serving his country. Those 12 months, well, they toughened him, softened him, changed him, shaped him. The 50 years since? He’s had struggles.

But his silver lining: perspective.

“Vietnam made my life easier to some degree,” he said. “Nobody has tried to kill me for doing a bad ad. They don’t throw hand grenades for a bad marketing plan.”

So, yeah, Broach carries around a weight. It’s mostly light, occasionally heavy. But always there.

“I do talk about it as freely as I can …,” Broach said quietly, his voice trailing off.

And then: “It doesn’t matter how much I tell you about it. You can’t truly understand what went on.”

How could we? Most Gen Xers and on down the alphabet have known no such sacrifice.

No, Allen, we can’t understand. But today, on this Veteran’s Day eve, there is something we can do.

We can carry some of that weight for you.

In his own words: Allen Broach reflects on being wounded twice in the 7 months he fought fighting in Vietnam in 1969

In 1969 men landed on the moon. There was Woodstock. Richard Nixon was president. There were…

Thank you, Mr. Broach, for your service. And Mags -- really nice job on the story.

Mr. Broach, from a former Big Red One trooper ('69-'70), welcome home. I was a combat photographer and my first trip into the jungle was with the Quarter Cav. I also went out with the ARPs . . . darn fine unit. Thank you for serving.