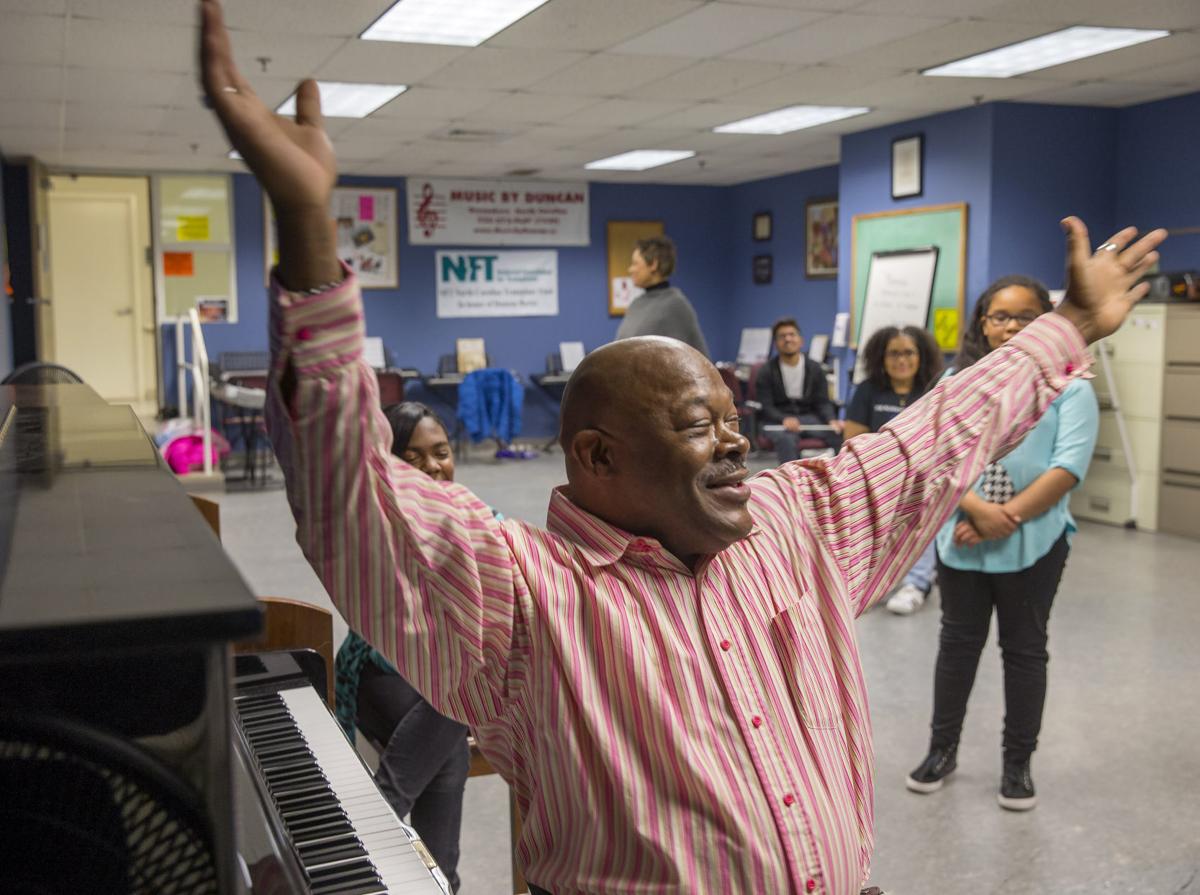 Piano instructor Duncan Butler raises his arms after performing a song at his studio at the Greensboro Cultural Center on Feb. 14, 2017. Butler, 55, died Tuesday, the day before he was to perform on stage at the world-renowned Apollo Theater in Harlem in New York City. 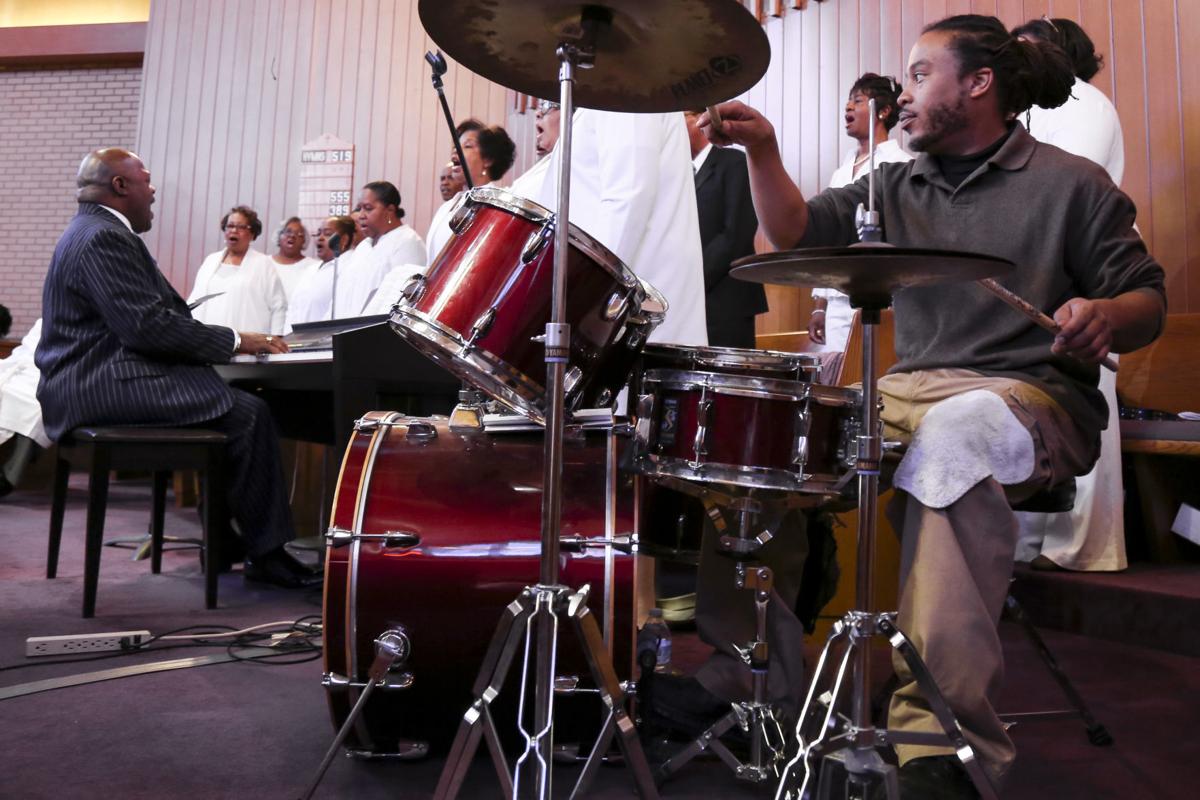 In this March 2017 photo, Duncan Butler plays the piano with James Siddle on drums for the band at St. Matthews United Methodist Church. 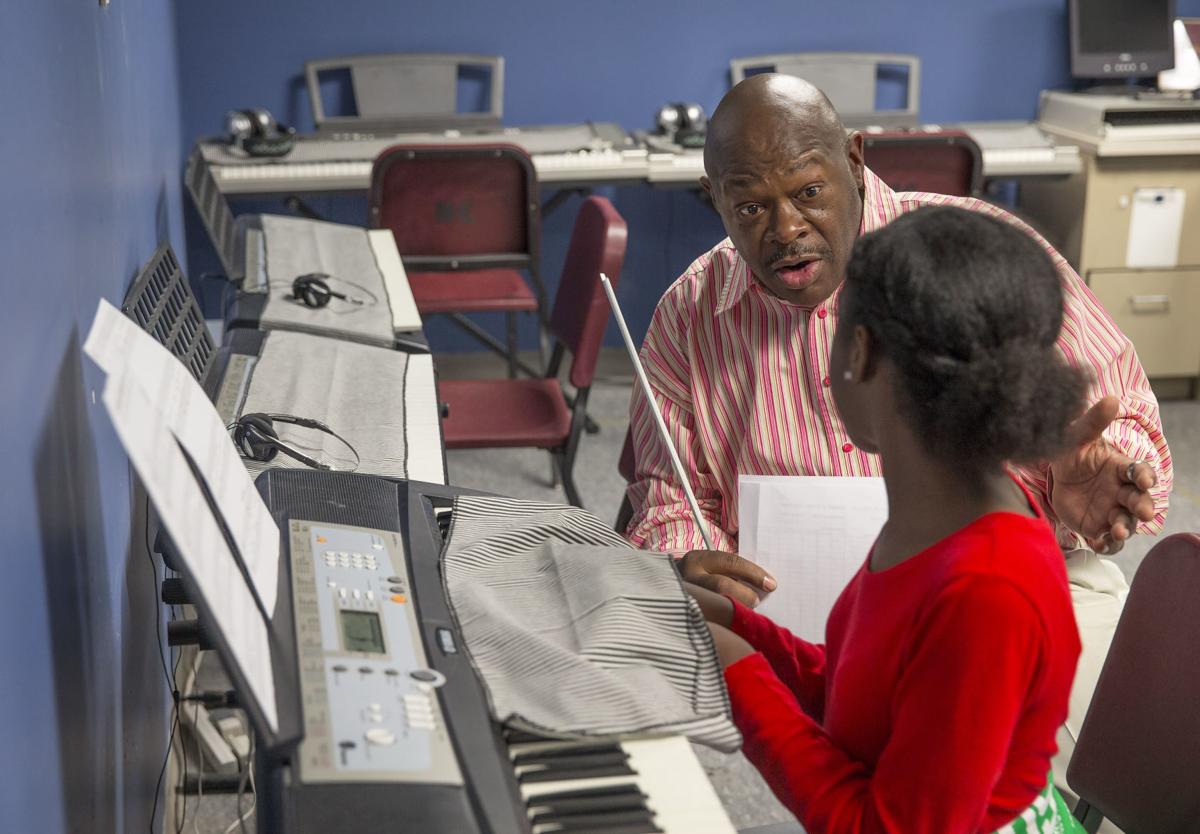 Butler used music to get him through rehab, then found a place in society by teaching music to children like Jada Capers at his studio at the Greensboro Cultural Center.

Piano instructor Duncan Butler raises his arms after performing a song at his studio at the Greensboro Cultural Center on Feb. 14, 2017. Butler, 55, died Tuesday, the day before he was to perform on stage at the world-renowned Apollo Theater in Harlem in New York City.

In this March 2017 photo, Duncan Butler plays the piano with James Siddle on drums for the band at St. Matthews United Methodist Church.

Butler used music to get him through rehab, then found a place in society by teaching music to children like Jada Capers at his studio at the Greensboro Cultural Center.

He knew that people would still remember what they had read in the newspaper about a tumultuous few years in the 1990s fueled by crack — a drug that destroyed lives in every corner of the city, and nearly his at that time.

“I knew parents — probably in the back of their minds — would question me having time alone with their children,” Butler recalled in 2017. “It took a degree of trust. I did feel as though I had to be very open. I hid nothing. It became my testimony, not my downfall.”

It led to full “Music By Duncan” classes at local schools and in spaces at the Greensboro Cultural Center and the B Natural Academy of Music, where he later also taught the homeless and recovering addicts to play music. He began music in the atrium performances at Moses Cone Hospital, which is now a vibrant musical program and national trend. He was later hired as the minister of music at several area churches.

Butler, 55, died Tuesday, the day before he was to perform on stage at the world-renowned Apollo Theater in Harlem in New York City that’s as famous to musicians as Carnegie Hall — especially in the African-American community. The funeral will be 3:30 p.m. Saturday at Evangel Fellowship, 2207 E. Cone Blvd.

“Today, Duncan was suppose to stand before a national audience on the world’s greatest stage to be judged by man and receive their accolades,” friend and fan Joseph Level wrote Wednesday on Facebook. “Instead, Duncan is before an audience of One, on a stage that the entire world must one day stand, to be judged by God.”

Butler grew up singing at East White Oak Baptist Church in the northeast part of town, where his mother was the music director and had every child on their street in the choir. Everybody knew the singing Butlers, who, when Duncan was 9, recorded the song “I’m Looking for a Home,” which was written by his mother. His brother, Tiger, who died in June, was a well-known local band musician. And his late brother, Charles, was the longtime and much-loved music director at Smith High.

Butler, who taught himself to play piano and performed in the school orchestra, would later earn a music degree from N.C. A&T. By his early 20s, Butler had won a number of high-profile competitions beyond the city’s borders, including the Budweiser Showcase, which drew acts from across the Southeast.

His musical gifts put him in the presence of powerful people through campaign and community events at which he was asked to perform. He would meet governors, poet Maya Angelou and civil rights activist Jesse Jackson, among others. Butler, who was running an after-school music program at Erwin Montessori, also won a local contest to perform at the legendary “Showtime at the Apollo” in New York City, where he was a finalist.

But he was hiding a secret, one he would later tell years later through the lyrics of his CD, “Peace Love and Happiness,” which was released in 2017 to coincide with a concert at Community Theatre of Greensboro.

Butler was 30 when he tried crack cocaine. It’s a drug so powerfully addictive — more so than powder cocaine and heroin — that it takes a bigger dose each time to achieve the same high.

“Before then, if you had looked me up, you would have seen a few traffic tickets or ‘choir boy’ by my name,” Butler said years ago.

It was after snatching a purse and later getting arrested for felonies involving stolen property that Butler was sentenced in 1996 to a year in prison, mostly spent in Watauga County.

“It was the best thing that could have happened to me,” he said.

Clarity returned as the drug worked its way out of his system.

Inmates who watched him read his Bible were asking him to pray about things going on in their lives. Soon, he was conducting the prison choir.

Once, he thought he heard God speaking to him. “He said, ‘This is how I can use you,’” Butler recalled.

And that’s the calling he accepted.

Most recently, the kidney transplant recipient founded the nonprofit CaboutU (pronounced “see about you”) Project, which takes music into homeless shelters, prisons, recovery programs and hospitals.

“I was proud of the man he became,” said his sister, Gloria Butler Graves, “and how his life’s work was in helping others.”

Today, churchgoers might not see anyone wearing a choir robe at their place of worship, and they might sing along to a Stevie Wonder song inst…