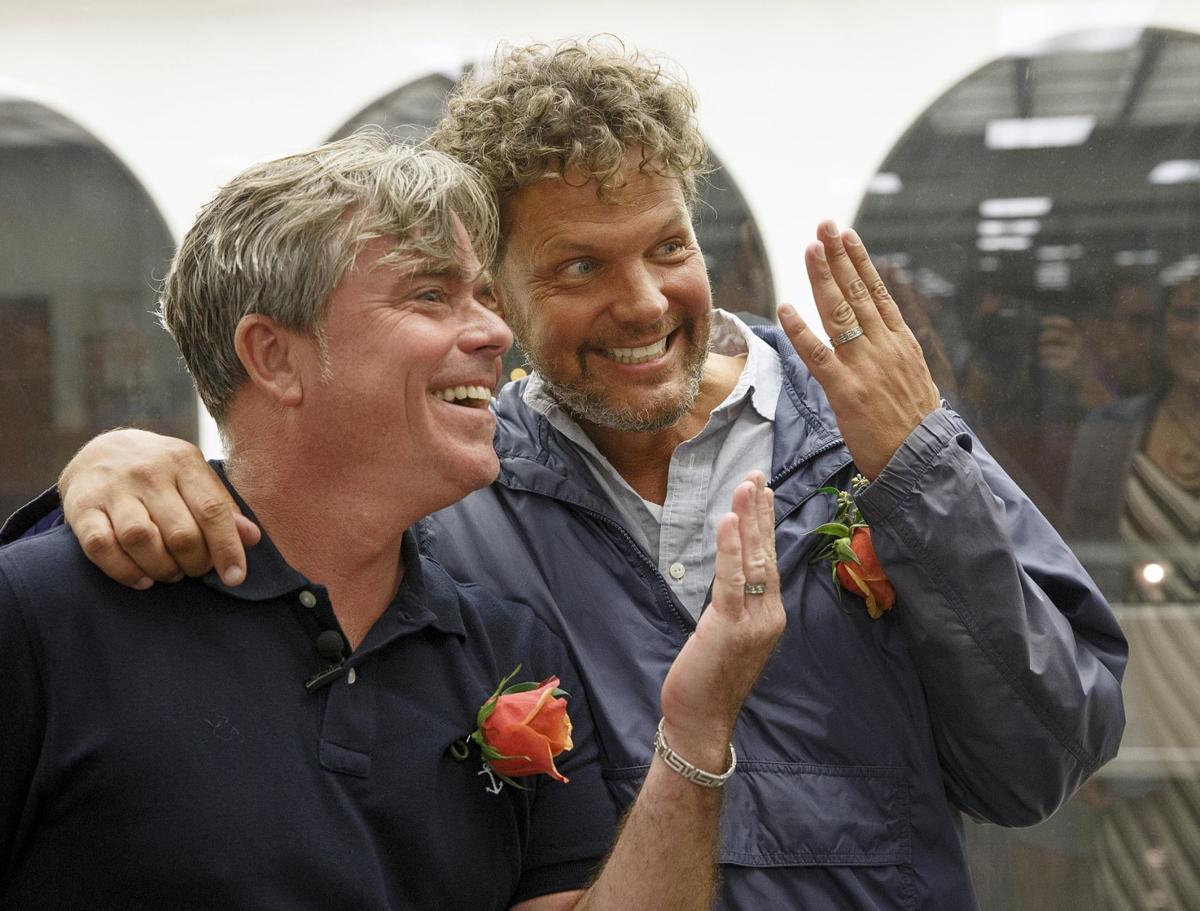 Brad Newton and Frank Brooks show off their wedding rings after being the first to wed at the Guilford County Register of Deeds office after gay marriages became legal on Friday, Oct. 10, 2014, in Greensboro, N.C 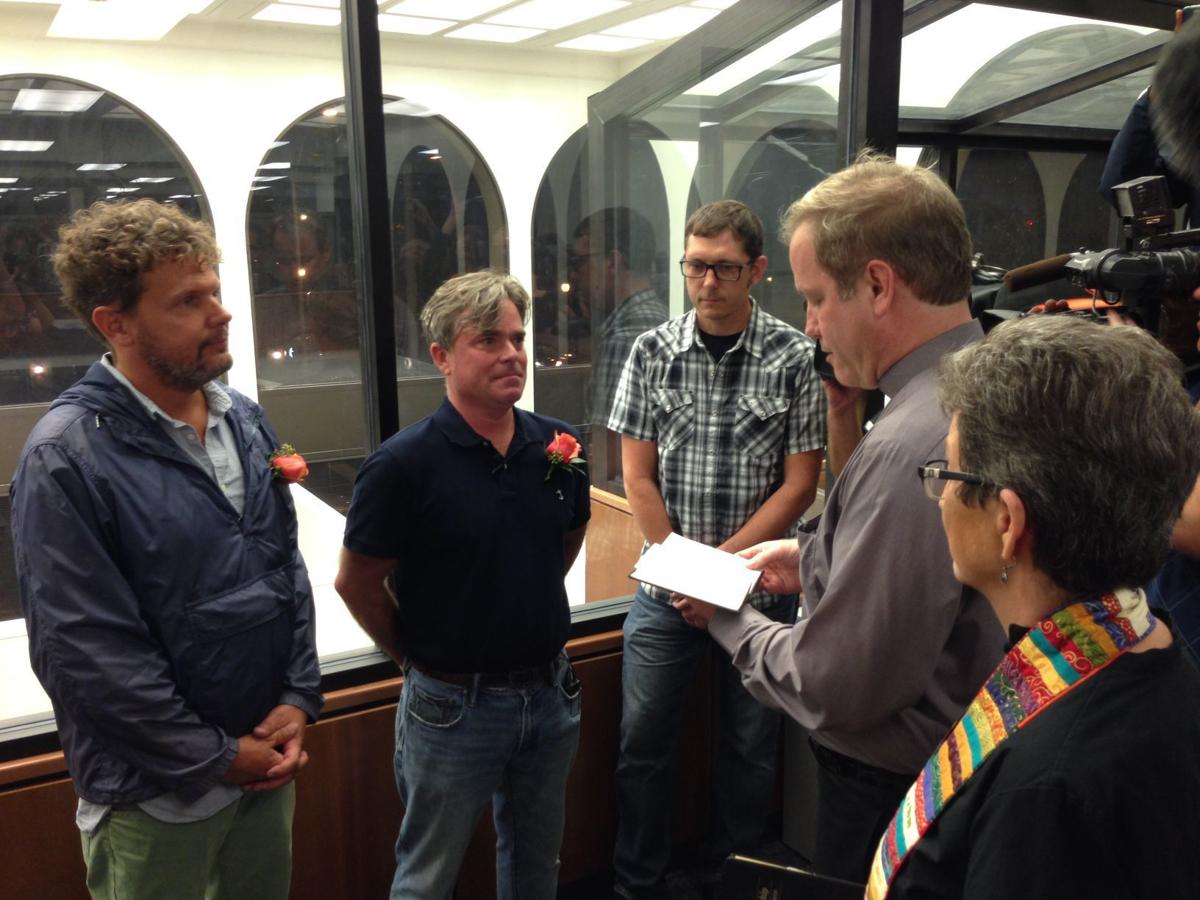 Brad Newton (left) and Frank Brooks get married at the Guilford County Register of Deeds Office in Greensboro, N.C. on Friday, Oct. 10, 2014. 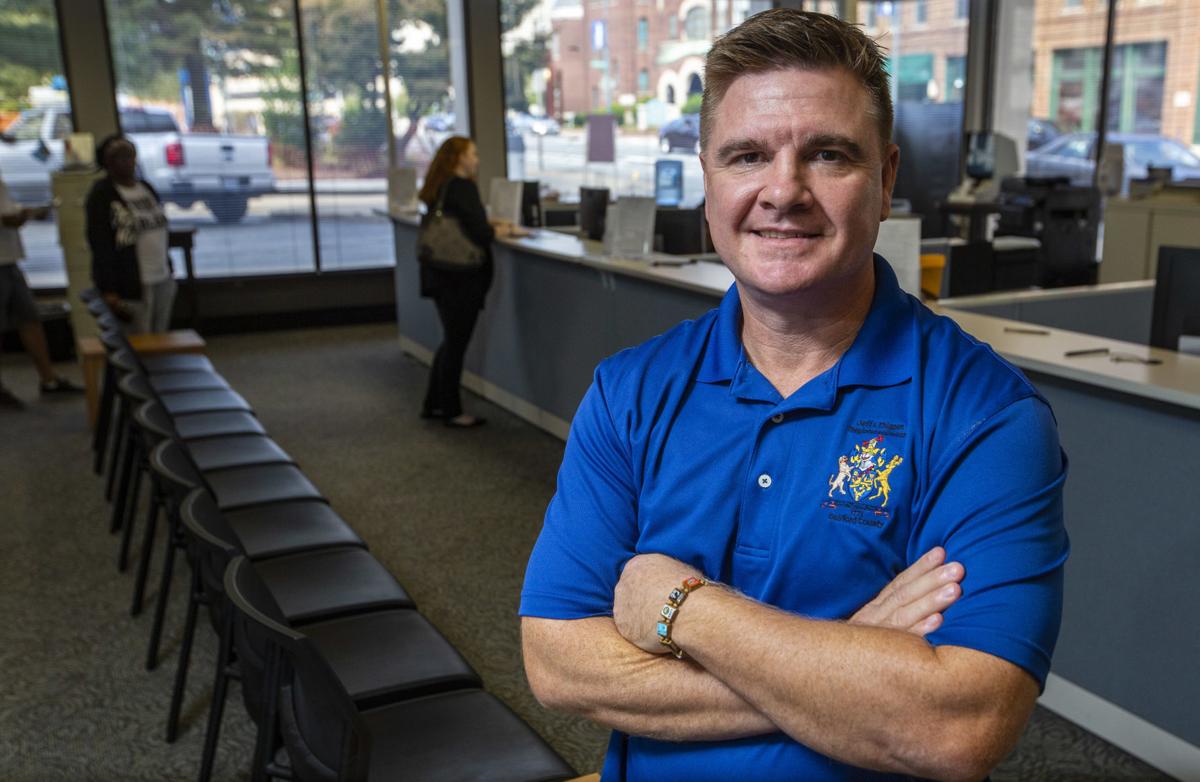 Jeff Thigpen, Guilford County register of deeds, stands in front of the desk where people get marriage licenses in Greensboro on Monday. 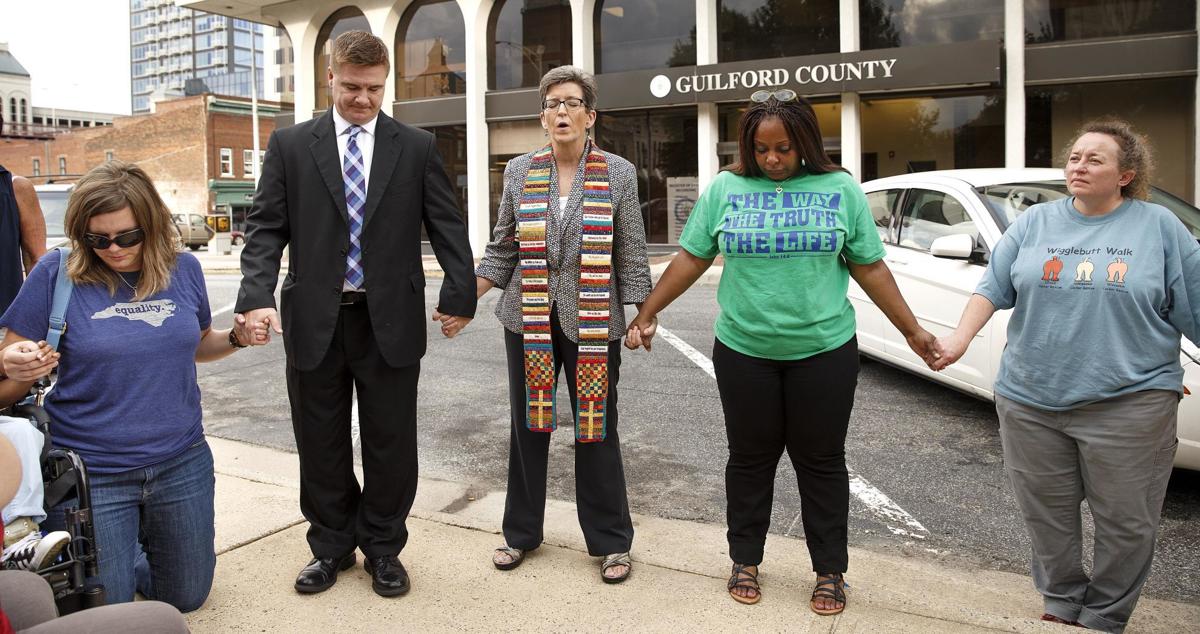 Believing that no ruling would come from the federal courts, Jeff Thigpen, Guilford County Register of Deeds, second from left, prays with supporters of same-sex marriage at the end of the business day on Friday, Oct. 10, 2014, in Greensboro, N.C. (LYNN HEY/ News & Record) 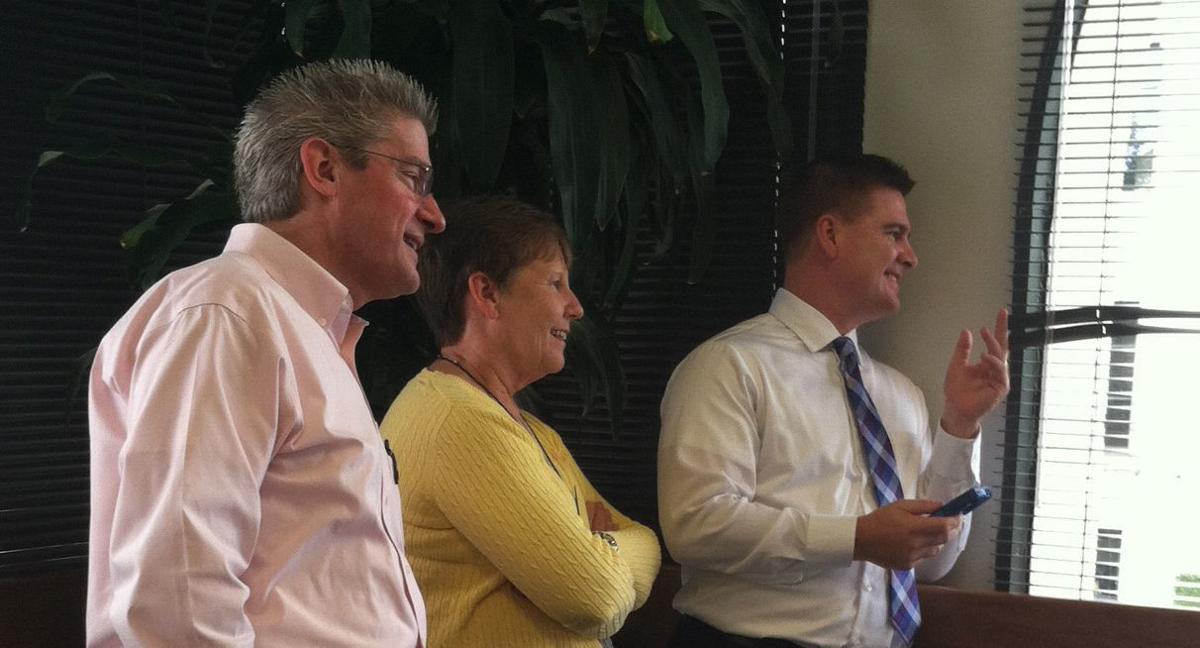 Register of Deeds Jeff Thigpen and employees watch the crowd outside his office gather and wait for word on whether same-sex marriages can go forward in Guilford County. 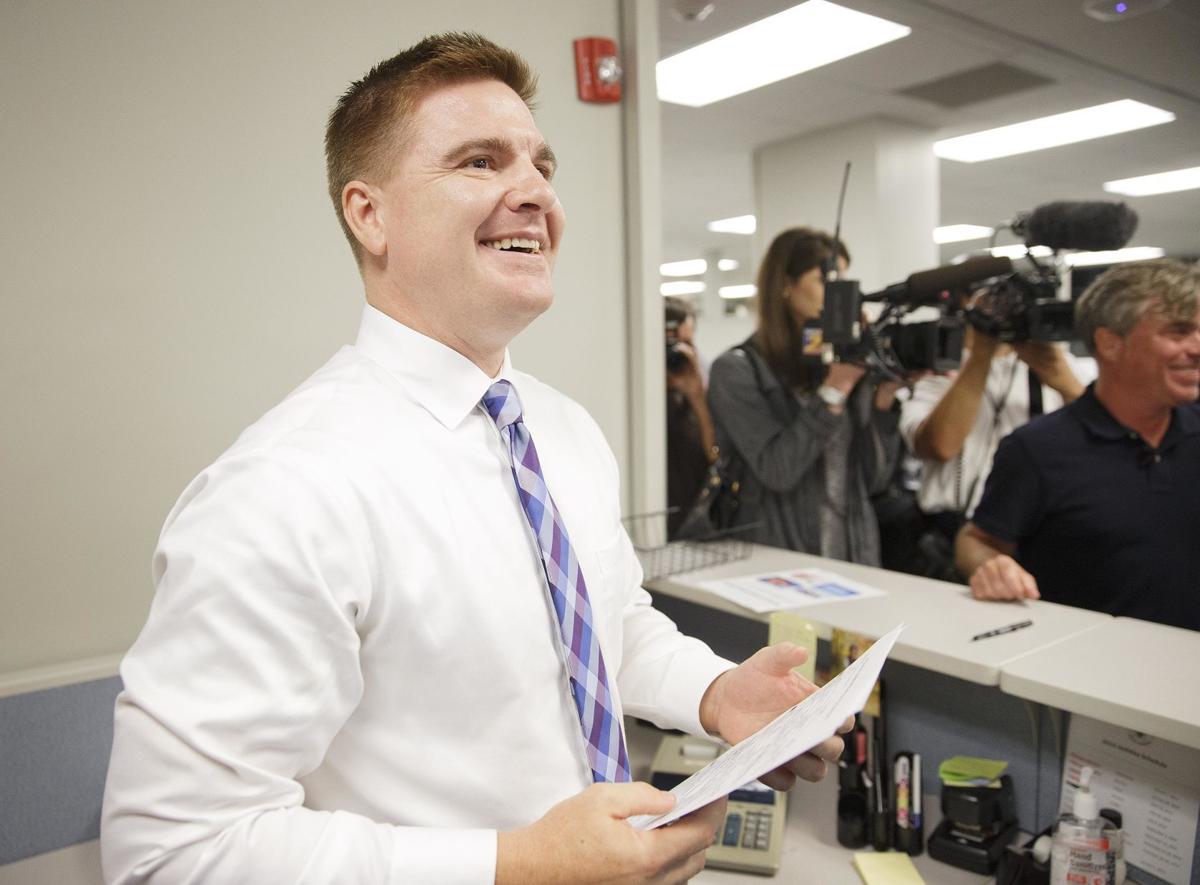 Jeff Thigpen, Guilford County Register of Deeds, watches as same-sex marriage arrive after business hours to get marriage licenses, some getting married in the office on Friday, Oct. 10, 2014, in Greensboro, N.C. 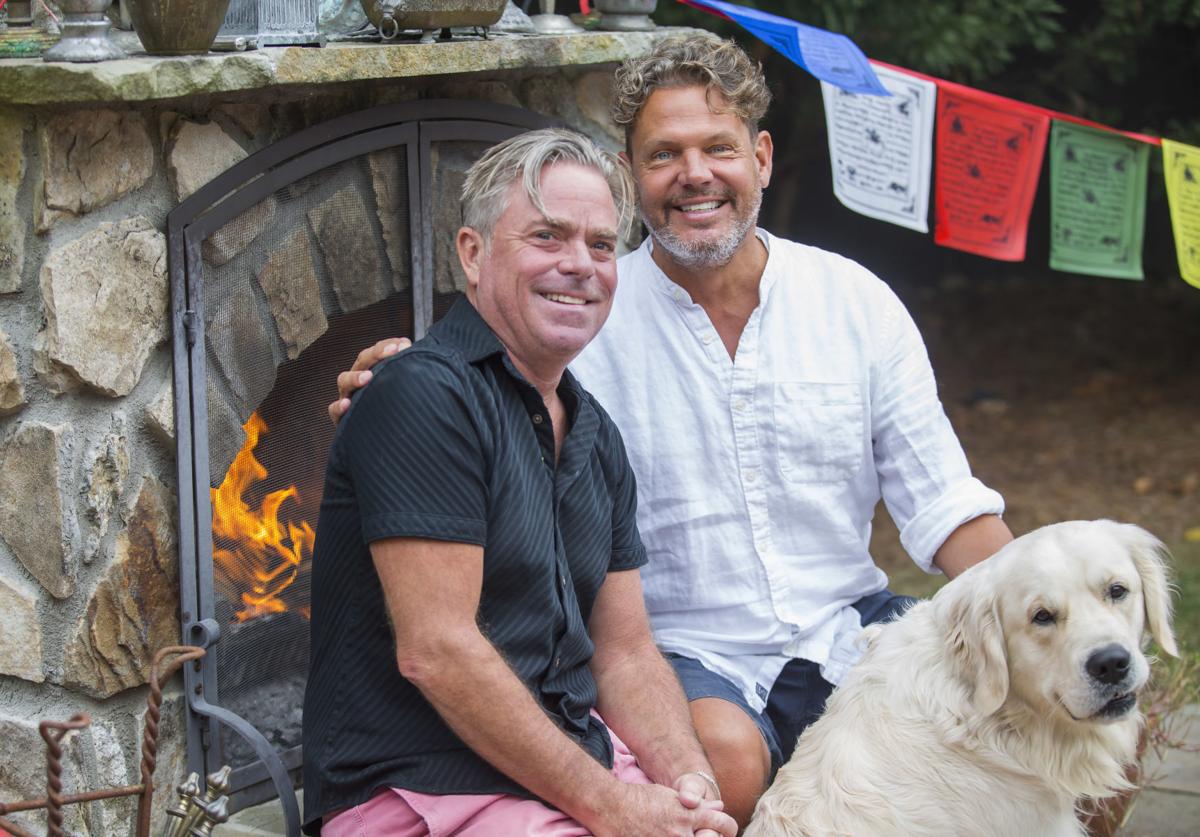 Frank Brooks and Brad Newton were the first same-sex couple to marry in Guilford County five years ago in Greensboro.

Brad Newton and Frank Brooks show off their wedding rings after being the first to wed at the Guilford County Register of Deeds office after gay marriages became legal on Friday, Oct. 10, 2014, in Greensboro, N.C

Jeff Thigpen, Guilford County register of deeds, stands in front of the desk where people get marriage licenses in Greensboro on Monday.

GREENSBORO — Frank Brooks and Brad Newton have lost three parents between them and gotten through a cancer scare in the last five years — as husband and husband.

"It's nice to know there's that legal safety net," said Newton, a marketing consultant, of being legally married to Brooks, a real estate agent, who he met at a mutual friend's birthday party 18 years earlier. "I love him as much as I ever did."

Thursday marks the fifth anniversary of Brooks and Newton saying "I do" at the Guilford County Register of Deeds office on Oct. 10, 2014 — just hours after a judge's order struck down the state's ban on same-sex marriages.

The government office that processes marriage certificates had closed for the day, but was among a handful across the state that reopened for business after the ruling.

Since then, about 980 same-sex couples have filed for marriage licenses in Guilford County.

"I love when I hear, "How is your wife doing?" said Greensboro police officer Latoya Anderson, who married her longtime love, Ashley Benton, a few months after the ruling. "Years ago, most people were only comfortable acknowledging Ashley as 'my friend,' and I believe that speaks volumes on how far we have come as a society."

Benton wore a long, white gown and carried a bouquet as they exchanged vows before a judge.

Anderson was in her uniform.

"They thought we were strange for wanting the same respect, the same rules as heterosexual couples when we were and are living the same lives," said Benton, the founder of a Greensboro nonprofit.

Jeff Thigpen, like other registrars across the state, had been waiting the whole week for a judge's ruling one way or another.

At least two cases were making their way before federal judges in North Carolina.

All eyes were on the Greensboro Middle District Court across the street from the Register of Deeds office, where Chief U.S. District Judge William L. Osteen Jr. was hearing arguments against eliminating the state ban on same-sex marriage.

"I remember someone asking me that week about same-sex marriage, and I said for the last couple of years it's been down the road," Thigpen recalled Monday. "But on Friday, it was at our door."

By 9:30 a.m., Thigpen was on a flurry of calls with his counterparts across the state. Of chief concern: legal paperwork that would replace "Bride" and "Groom" with "Applicant One" and "Applicant Two."

Thigpen knew that some of his staff, based on their religious convictions, were having trouble with the idea of processing the paperwork necessary so two people of the same sex could wed.

Several couples decided to go ahead and fill out forms, which would be processed if the judge overturned the ban.

As it neared 5 p.m., Brooks and Newton were among those showing frustration.

"I just want it to be over with," Newton said at the time.

Word then spread that Osteen had denied a request for oral arguments from GOP leaders Thom Tillis and Phil Berger of Eden — but was giving the state legislature until Monday to file written arguments against eliminating the ban.

Thigpen spoke to the large, disappointed crowd outside his office. He locked up and everyone went their separate ways.

But they would soon be back.

Soon after, news spread that another federal judge in the state had struck down Amendment One — the state's ban on same-sex marriages —  as the business day was ending.

Thigpen had been in the McDonald's drive-through picking up dinner for his son when he got a flurry of texts and calls.

"I felt an overwhelming need to do something," Thigpen said later.

All eyes had been on Osteen, who was appointed by Republican President George W. Bush, to make the momentous decision.

But it was a President Barack Obama appointee, Max O. Cogburn Jr. from Asheville, that did it instead.

"The issue before this court is neither a political issue nor a moral issue," Cogburn wrote in his opinion. "It is a legal issue and it is clear as a matter of what is now settled law in the Fourth Circuit that North Carolina laws prohibiting same-sex marriage, refusing to recognize same-sex marriages originating elsewhere and/or threatening to penalize those who would solemnize such marriages, are unconstitutional."

Couples returned to the Register of Deeds office, running around the surrounding parking lot yelling, "Yes!"

Thigpen pulled up in his car.

A media throng had began to gather as well.

"Do you want to do interviews or get married?" Thigpen asked the same-sex couples.

"Jeff's actions that night are a testament to his integrity, his deep sense of service to all in this county and his compassionate heart," reflected the Rev. Julie Peeples, who performed weddings that night.

Couples filed inside with flowers and balloons. Some brought children.

At 6:52 p.m., Brooks and Newton, wearing peach corsages and ponchos because of the rain outside, became the first same-sex couple to be wed in Guilford County.

Around them, other couples were in various stages of filling out marriage paperwork.

"It’s the first for me. It’s the second for him," an elderly man told a clerk typing the information into a computer. The second man had been divorced after a heterosexual marriage.

As clergy married people on the spot, a self-described street preacher walked in off the street, pleading: "Please don’t do this! This is against God’s word!"

"These are people who have been hurt already," Peeples softly said to him.

She asked if they could pray together.

The man left, and people cheered as he exited.

Earlier that day, 23 heterosexual couples had applied for licenses over an eight-hour period. By night's end, 24 same-sex couples had done the same.

Thigpen is glad to have played a part in the history-making event.

"When I look back on it, I see the chaos and uncertainty in the context of being incredibly grateful to be in the position to serve people," he said. "When you are with people who have suffered, who have been — in some cases, victims of violence, who have been castigated and demonized — and they are able to finally enjoy the privileges, the benefits, the rights of being an American, you cannot do anything other than be in awe."

Like Brooks and Newton, many had been together for years and already considered themselves married even if the laws in many states didn't.

Brooks and Newton understood each other's moods and strengths. Had long ago pledged to never go to bed angry. Talked about things big and small.

They married a second time months later in their backyard, in front of about 200 friends and family. A taco food truck was in the driveway.

A family friend walked them down the aisle dressed as Wonder Woman.

Instead of gifts they asked for donations to the Triad Golden Retriever Rescue, which finds homes for dogs.