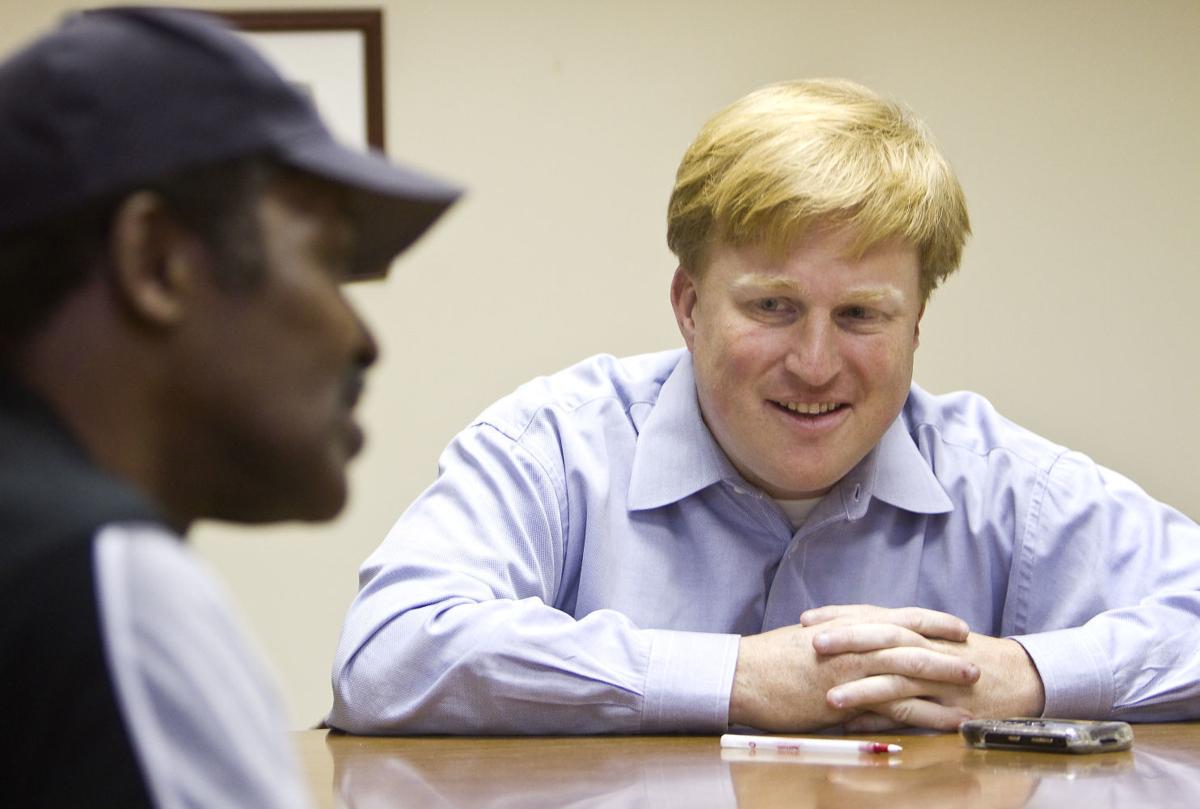 Greensboro attorney Drew Brown, in this 2011 photo, took on Charles McKinnon’s case, although he knew the odds were against winning: “Charles is a good guy, and sometimes lawyers just need to do this.” 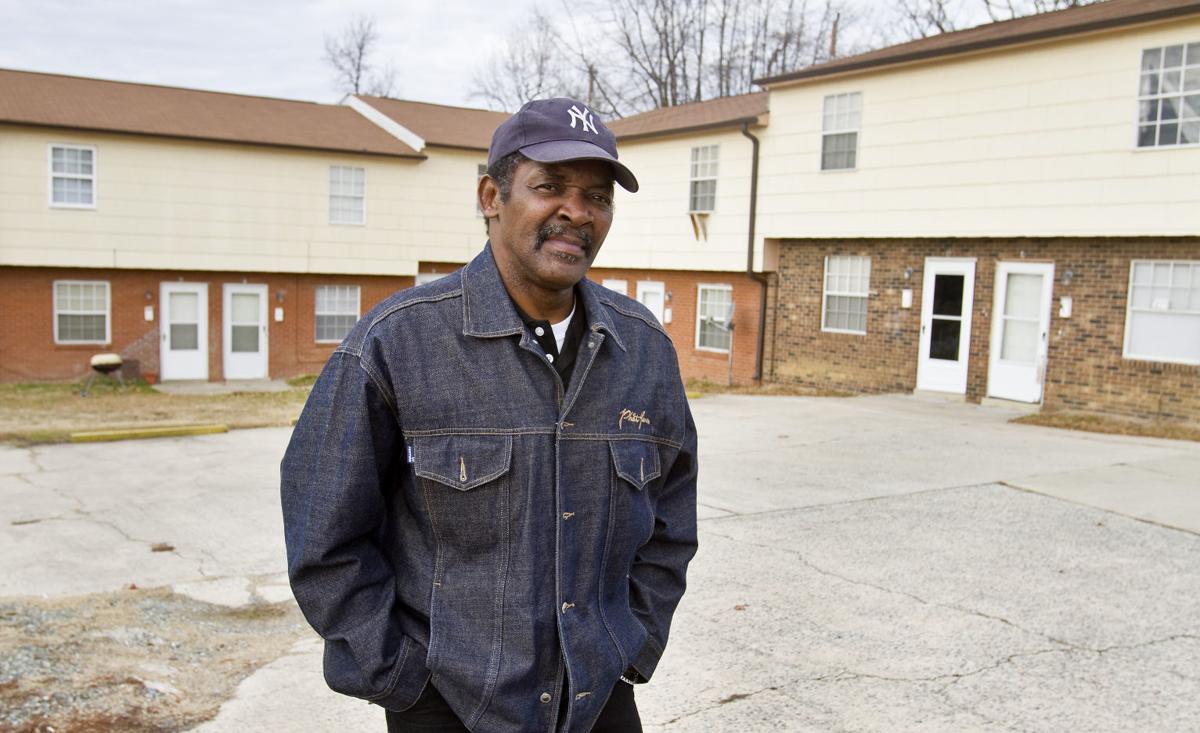 Charles McKinnon was awarded this apartment building on English Street in Greensboro in 2011 after he was injured by the former owner and a jury ruled in his favor. He was represented by Drew Brown. The judge in the case said cases such as this one are often impossible to win. 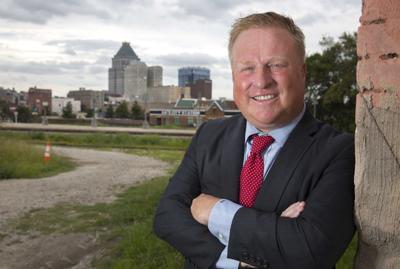 GREENSBORO — Probably not another attorney in the courthouse that day would have taken the case.

Perhaps few across the state.

That’s because it was the kind of case that often goes nowhere.

This one involved a homeless man who regularly picked up painting jobs from a contractor he would later accuse of attacking him.

"This was an unusual case because of the facts," Superior Court Judge William Z. Wood Jr. said at the time. "People don’t usually get their necks broken in fights, and you usually don’t get an attorney who will take the case."

Even then, "A judgment without a solvent defendant is not worth a lot," Wood said.

Months before and still in a neck brace, the injured man, Charles McKinnon, had walked all over downtown in search of "that attorney on TV," when he instead found Drew Brown — a $500-an-hour lawyer who admittedly enjoys the battle as much as the outcome.

Brown sues other lawyers for malpractice, which few litigators will do, but has also fought pro bono to get an elderly couple’s life savings back and other cases that involve everyday people.

For the past two years, Brown has worked to change how the Guilford County Sheriff's Office initiates car chases stemming from a horrific accident that shook the city in 2017.

As a young lawyer, the Duke Law School grad often took a seat in the Guilford County Courthouse to watch the likes of Norman Smith, Locke Clifford and Fred Lind — local legends in the field — make the wheels of justice turn.

Today as a civil litigator, the hard-charging, Type-A personality with piercing eyes and a slow, infectious smile is now attached to some of the most mundane but successful cases to go through the courts.

Linda Bloodworth-Thomason made their Poplar Bluff, Mo., hometown an integral part of the critically-acclaimed and popular sitcom "Designing Women” in the 1990s.

A Poplar Bluff city sign hangs above a door to the 43-year-old litigator's office.

Here’s some trivia: Brown’s mom was the director of the Designing Women Foundation connected to the noted television producer and he used to date Bloodworth-Thomason’s niece.

A smile crosses his face. Brown revels in his childhood.

"Scouts and soccer and all the things kids did in the '80s in a small town," says Brown, who was named valedictorian of his high school.

His mom was the dean of the local community college. Dad was a dentist.

It was his scoutmaster, an attorney, who inspired Brown to try to change the world through the legal system.

"In small towns that’s all you do: fight for what's right," he says.

After not getting into Duke University, he ended up at Wake Forest University. Later, he earned a coveted spot at Duke.

He caught the attention of one of the best practices in the state — Smith Moore in Greensboro — and quickly began making money for the firm.

Those small-town values had given Brown a practical side, but also the confidence to later go out on his own. With his own firm he could take more of the cases he wanted.

"We believe it better reflects our purpose: advocates for the people," Brown says.

Brown has read every case from the state appellate courts since 1976 and newer ones as they are published.

For bigger cases, he puts them before mock juries. Brown did that in a 2006 case out of Wilmington. A woman’s son was embalmed by a funeral home against the family’s wishes, which ran counter to their Jewish faith.

"I was surprised in that case to hear from (the focus group) that I really needed to focus more on the wrongful conduct of the funeral home than on my client's pain," Brown says. "If the jury doesn't like the defendant's conduct, they are a lot more likely to be sympathetic to your plaintiff."

Jurors found the funeral home negligent in how they handled the corpse and awarded the family $500,000.

It has since become a seminal case in how funeral homes treat corpses.

A large but manageable caseload.

And freedom to pick and choose.

"Because I'm not married and don't have kids and don't have to make money on a given month, I can take cases I otherwise couldn't take," Brown says. "It's given me the ability to go and try cases in random counties and not come home for two weeks."

He didn't have very many complaints about life. But his mind couldn't shut down at night.

A first vodka to get to sleep became several.

"My mind's got a little gerbil in it that runs around like a little race car, especially at night," Brown explains. "And when I try to go to sleep, it doesn't work — especially if I have a big hearing."

He mentioned the dilemma to co-workers.

Still, it wasn’t like he was showing up to work drunk.

But his reliance on alcohol to sleep was concerning others around him.

Boxes of cards and notes were sent to Brown when he was in rehab.

"We're pulling for you," wrote an attorney at a competing firm.

Now that he’s been out about two weeks, Brown hasn't been apprehensive about sharing his stint with clients.

"I'm a human being like everyone else and when you have a problem you have to ask for help," he says.

Staying sober is something he works on daily.

"In this treatment world I've been in, they keep saying I need to have the serenity to accept the things I cannot change, and I've never been good at that," Brown admits.

Handing over his phone for six weeks was harder than giving up his independence.

When he got back to the city after rehab, Brown started sleeping at the house of a neighbor.

"We watch basketball and go to sleep," he says with a laugh. "Right now, he's commissioned to stare at me. My friends and partners and family want me to sleep in someone else's house right now, and I'm fine with that."

A woman named Charlotte Willard was on the line about her 90-year-old sister and "lost life savings."

An in-home nursing assistant had allegedly taken the money from Willard's sister, Wanda Harris, who was recovering from a stroke, and her largely incapacitated 86-year-old husband. They lost about $30,000, which would have allowed them to stay in the home they owned with 24-hour care instead of a nursing facility.

The service they used was insured and required background checks on all employees.

So Harris gave her debit card to one of the caregivers to get money for the man who mowed her lawn and to pick up groceries.

In late 2017, a friend noticed odd charges on the couple's banking statement. The account was nearly empty.

An investigator with the Guilford County Sheriff's Office found 93 ATM withdrawals of between $100 and $800 each, and two $1,000 purchases connected to the account during a four-month period.

The caregiver was charged with exploitation of an older adult among other offenses.

The owner of the in-home service told the family they'd have to contact the company's insurer.

Brown asked the agency to refund the entire amount to the couple and handle the claim with the insurers themselves.

"The justice system is slow and it does not need to be slow here," Brown recalls saying at the time.

That wasn’t enough to persuade the agency.

So Brown filed a lawsuit.

The money was repaid to the couple within days.

Through it all, Brown didn’t take a fee.

“There’s an award for doing the right thing,” he says, “and that’s having done it.”

Brown’s office got a call from a respected criminal defense attorney with, of all things, a referral.

"As I remember, he had a lot of respect for Drew’s professionalism, knowledge of the law and drive," recalls Phil Warshauer, who sat in the attorney's office with a relative who took him there, still numb from grief.

A silver Acura trying to get away from a Guilford County sheriff's deputy on Battleground Avenue had run a red light at speeds of 130 mph and crashed into a Kia Optima, killing Warshauer’s daughter, Stephanie, and her friend — resulting in one of the worst accidents in the city’s history.

The families of both women wanted to do something about high-speed police chases to save the lives of bystanders and officers.

Now, under a new policy, officers won’t engage in vehicle pursuits for most nonviolent property crimes.

"Drew represented Stephanie to impact change," Warshauer says. "He has received minimal financial compensation and the majority of what he received was donated to a charitable fund that was established to memorialize my daughter."

McKinnon, the homeless man, claimed that after spending the day on a project at a church with the contractor, they had argued over money. He said the man only gave him $100 — half of what had been promised.

McKinnon testified in court that the man grabbed him around the neck from behind and slammed him to the ground.

"I couldn't get up," McKinnon remembers.

The contractor drove away, leaving McKinnon with a twisted spine and later a metal plate in his neck.

Not able to work, he fell behind in his rent and, while being evicted, began looking for an attorney.

Something about the affable McKinnon and the unflappable Brown clicked.

"We liked this guy," Brown says of taking a case that required a lot of work and potentially offered little. "Charles is a good guy and sometimes lawyers just need to do this."

Not long ago, Brown opened a locked filing cabinet in his office to reveal packets of checks for clients.

"Look at all these Christmas gifts," he says like a child.

What started as a single case of predatory lending four years ago has mushroomed to thousands of cases either settled or in the pipeline.

The rows of files represent the second batch of checks to go out.

Last time, so many people went to the same nearby BB&T that the branch ran out of money.

Some of the companies have avoided litigation by filing for bankruptcy.

"But we are fighting them," Brown says.