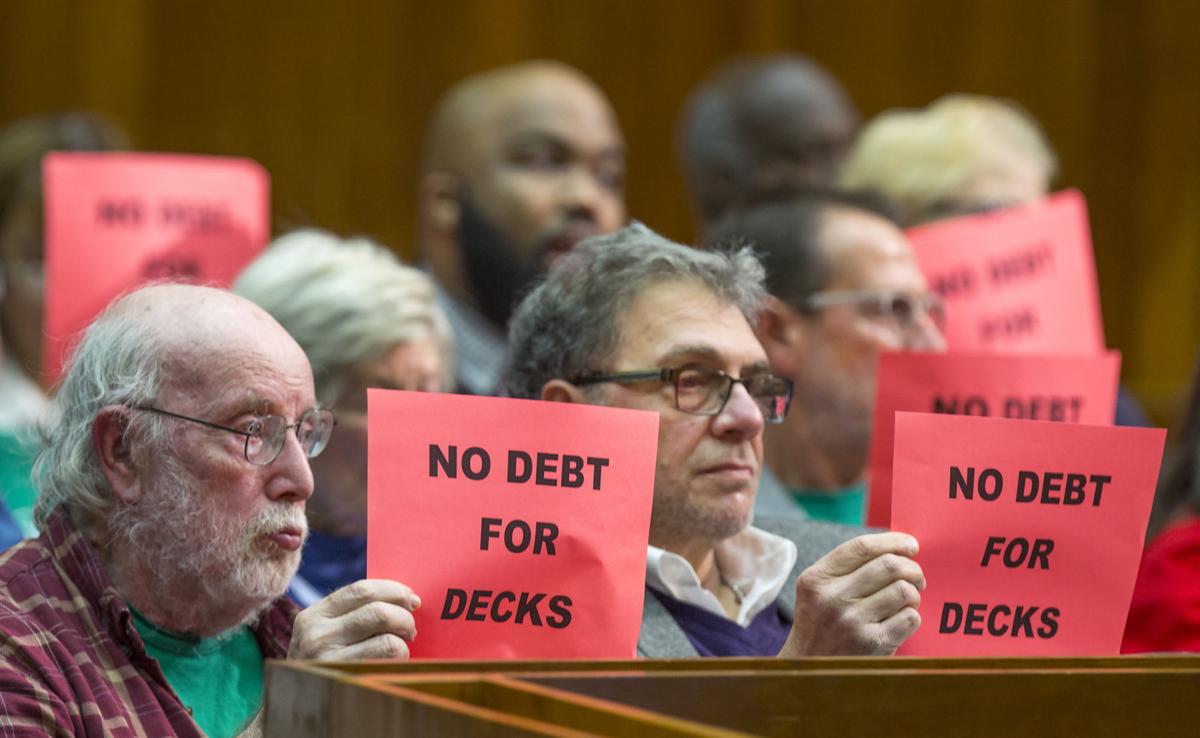 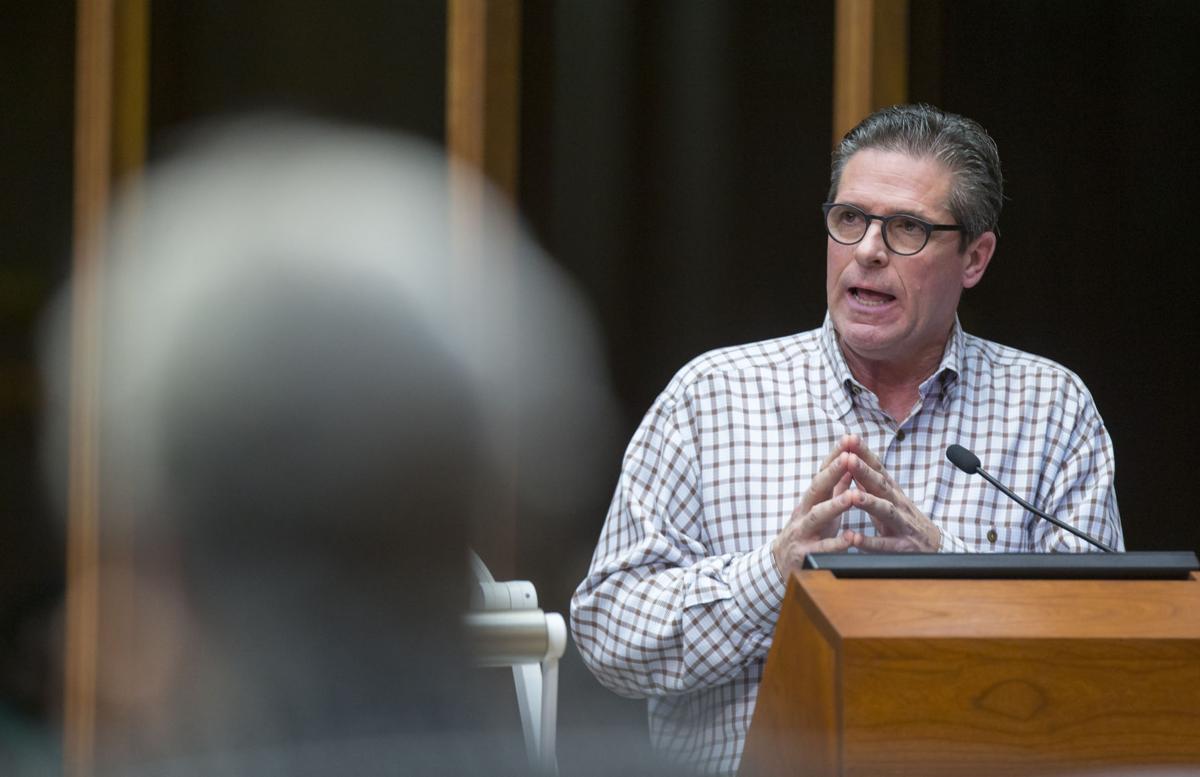 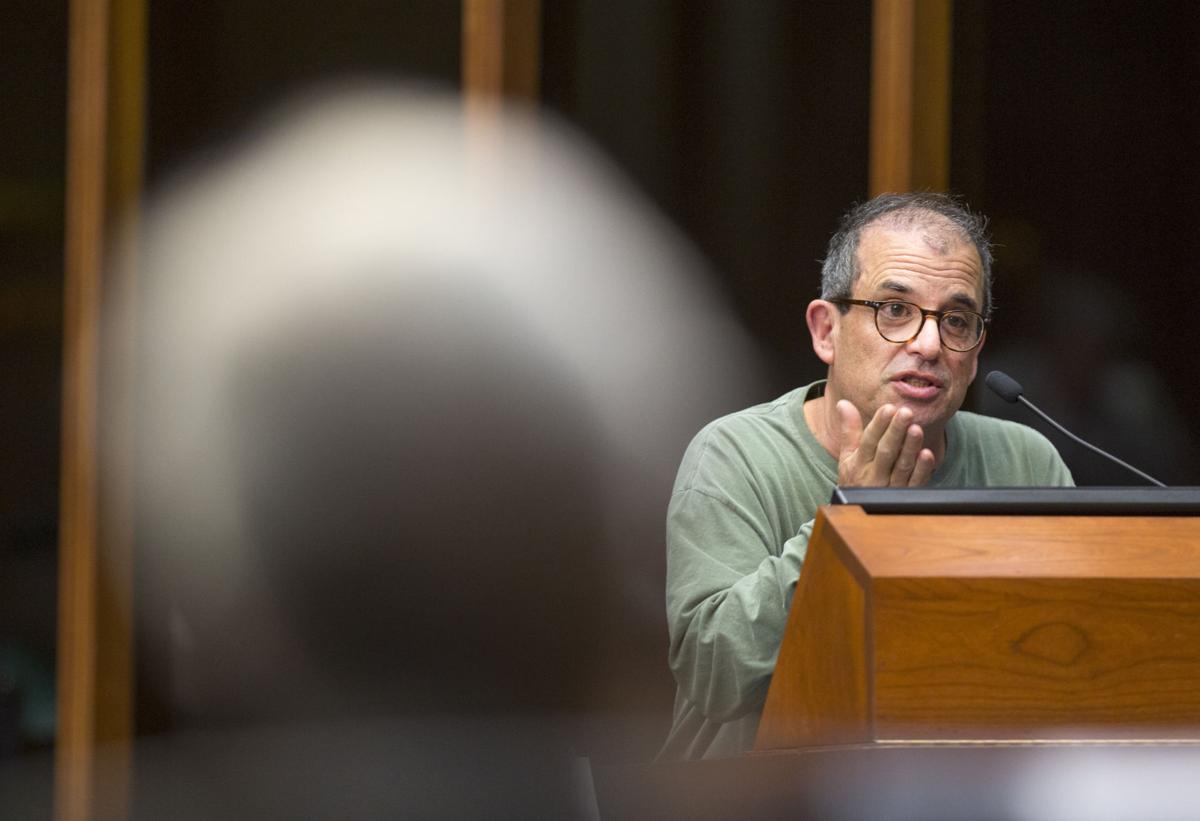 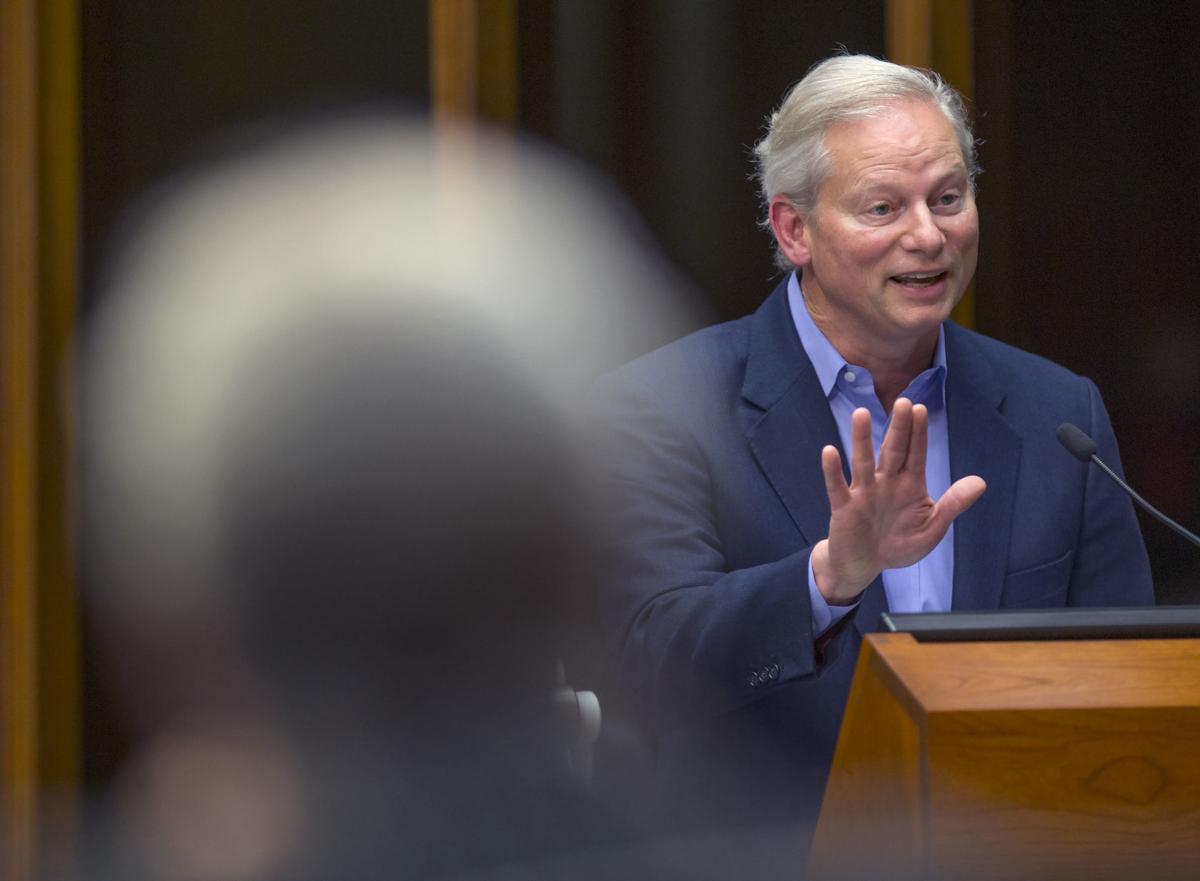 Developer Roy Carroll, who is spearheading the new parking deck at Bellemeade and Eugene streets, addresses the City Council recently. “Everything good that happens downtown benefits us all,” he told council members. 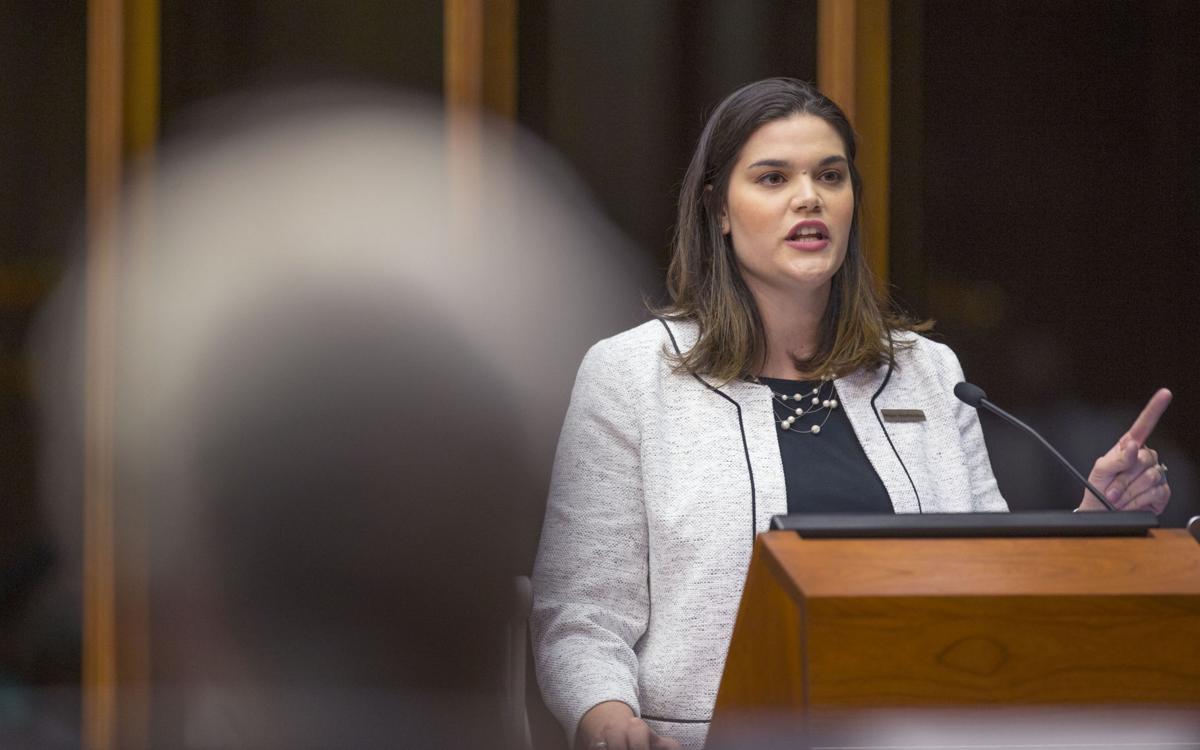 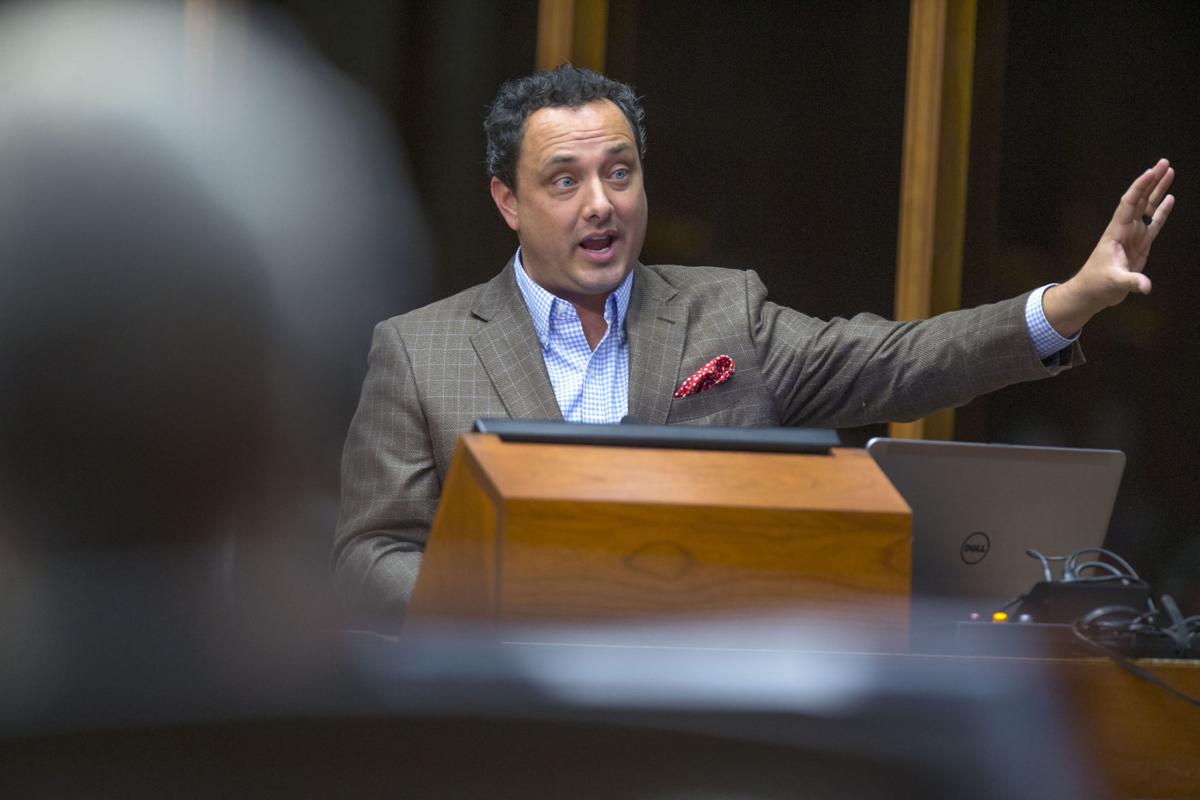 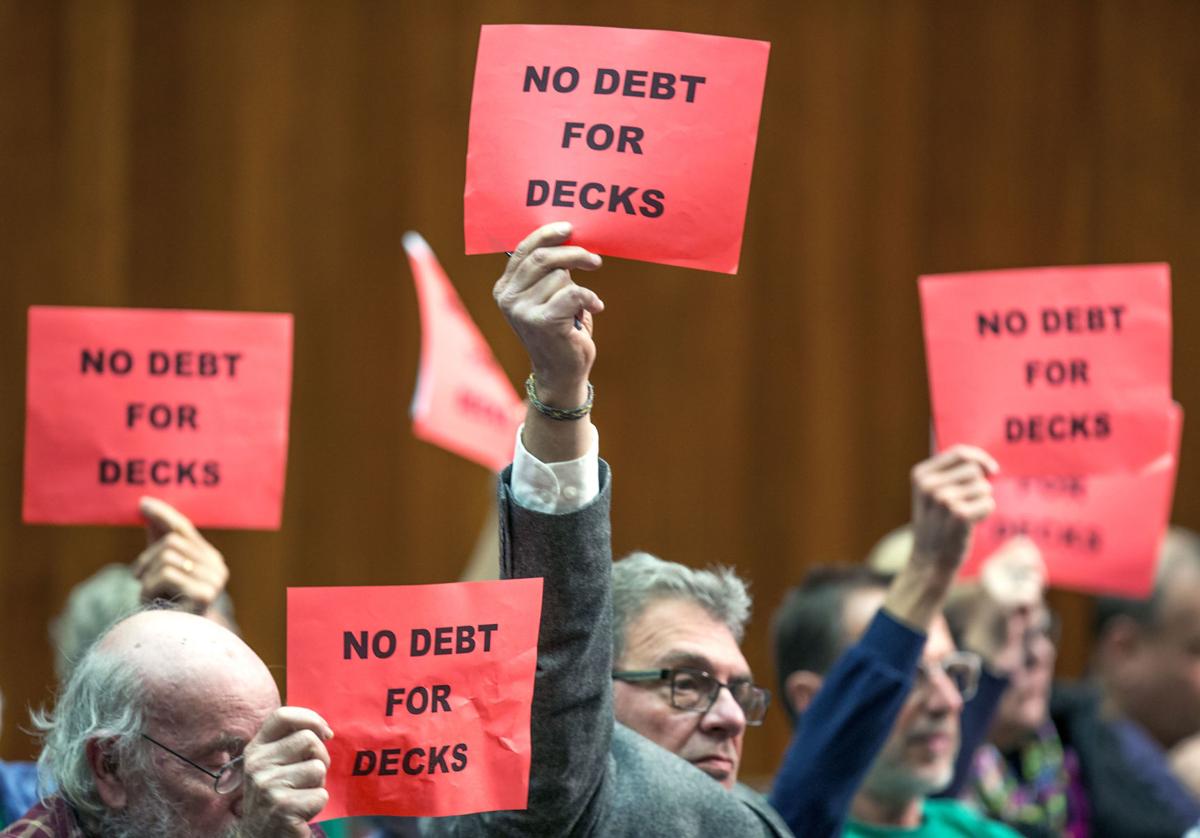 Michael Roberto (right) holds up a sign with other opponents of new downtown parking decks as the Greensboro City Council debates funding for the projects during its meeting on Dec. 19, 2017.

Developer Roy Carroll, who is spearheading the new parking deck at Bellemeade and Eugene streets, addresses the City Council recently. “Everything good that happens downtown benefits us all,” he told council members.

Michael Roberto (right) holds up a sign with other opponents of new downtown parking decks as the Greensboro City Council debates funding for the projects during its meeting on Dec. 19, 2017.

GREENSBORO — The city will spend up to $60 million to build two parking decks downtown, despite accusations of “trickle-down economics” by some residents and the threat of a lawsuit by a local business owner.

The City Council agreed late Tuesday night to reimburse local developers up to $30 million each for the decks — one on South Davie Street and the other on Bellemeade and Eugene streets.

The decks will bring 1,900 new parking spaces to downtown.

But they’ll come at a high cost in both tax dollars — the city will increase monthly parking rates from $65 to as much as $90 starting Jan. 1, 2019 — and in political capital.

The council’s votes came during a long, contentious meeting filled with multiple votes and angry comments from frustrated residents.

“We the people are a party to this contract that we never signed off on,” said Signe Waller Foxworth, a member of Democracy Greensboro who urged the council to postpone a decision on the decks until there has been more community discussion.

Council members voted 6-2 to build an 850-space deck on South Davie between February One and East Market Street. It’s being built in conjunction with a Westin Hotel behind Elm Street Center.

Councilman Justin Outling, a partner in the law firm Brooks Pierce, recused himself from all votes related to the project because the firm handled business related to it.

Councilwomen Sharon Hightower and Michelle Kennedy voted against the deck. Hightower argued that the city needs more time to work out a deal with Cone Denim Entertainment Center, which will lose a small right-of-way behind the building.

Owners say the six-story deck will block their use of the small right-of-way they own behind the building, making it significantly less convenient for tour buses to unload equipment. Without the easement, the owners say, they might as well close.

“Who has said to you that you have to vote tonight?” asked Amiel Rossabi, an attorney and part owner of Cone Denim. “If the Westin will come, they will come a month from now or two months from now.

“What do you know? What you do know is if you condemn, we will sue. We have no choice.”

The council voted 6-2 to give Cone Denim $55,000 and take the property by eminent domain, with Hightower and Kennedy voting against it. City Attorney Tom Carruthers told the council that they’ve worked out a plan that will give the venue more space with the deck than they have now.

Cone Denim had already rejected the city’s modification, saying that it makes their situation worse.

Rossabi said Cone Denim immediately will file an injunction to stop the city from building the deck. Jeff Furr, another Cone Denim owner and an attorney, further said the venue will sue for damages “as soon as we can get the paperwork together.”

The Westin Hotel is being led by Randall Kaplan, a local businessman and philanthropist whose wife, Kathy Manning, recently announced her candidacy for the 13th Congressional District in Greensboro.

Greg Dillon, a developer on the Westin project, said he has a franchise agreement with the hotel chain to open in late 2019. There are penalties for not opening then, he said.

“I don’t have any more time,” Dillon said.

The developers will lease up to 180 spaces at the standard city parking prices. The agreement doesn’t specify a minimum number of spaces.

The city would own the deck and spend about $2.3 million a year operating it and paying down the debt. The money would come from revenue on downtown parking.

The deck will have retail space fronting the Davie Street deck. It’ll be transferred to the Westin developers in a “land swap.” The city will give retail space in exchange for parking underneath the hotel on the other side of February One.

The second deck on Bellemeade and Eugene streets comes with fewer complications and ready-made development. The council passed it 8-1, with Kennedy voting against it.

“We’ve done an absysmal job of communicating with the public around these issues,” she said.

Local developer Roy Carroll is leading that project, which includes an Aloft Hotel and another $150 million in construction near the Greensboro Grasshoppers’ First National Bank Field.

The city will reimburse The Carroll Cos. up to $30 million for that deck, which will have 1,050 spaces. The agreement between the company and the city calls for an eight-story parking deck, complete with ground-level retail space and basement parking. The Carroll Cos. eventually will build a 15- to 20-story hotel and mixed-use tower on top.

The city will own the deck, which will sit on property that Carroll donated to the city.

“We need to have more activity downtown,” Carroll told council members. “Everything good that happens downtown benefits us all.”

Some wondered if the downtown hotels will be a financial boon for the city.

Megan Weathersby, who works at the downtown Marriott, said the hotel has an occupancy rate of 59.3 percent — the national average is about 65 percent. Last year, the Marriott’s occupancy decreased by 1.3 percent, she said.

Weathersby said the hotels run the risk of “flooding the market with inventory” that downtown doesn’t need. The city can’t rely on an “If we build it, they will come” philosophy, she said.

The suit, along with a motion for a temporary restraining order, seeks to stop the city from seizing an easement — in this case, an alleyway — behind the venue along South Davie Street.