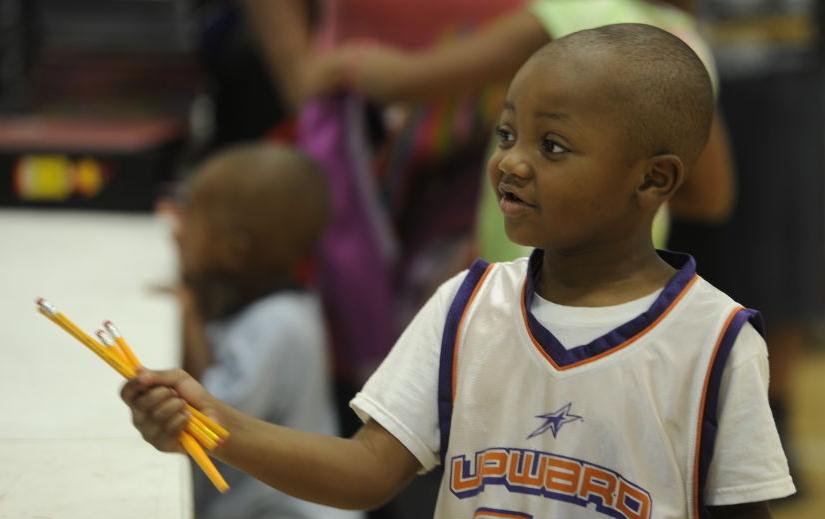 Michael Jones, who just turned 5 and will be entering kindergarten this school year, receives a handful of pencils Saturday at the Windsor Recreation Center in Greensboro.

Volunteers offer students a variety of backpacks during a giveaway at the Windsor Recreation Center in Greensboro on Saturday, Aug. 1. 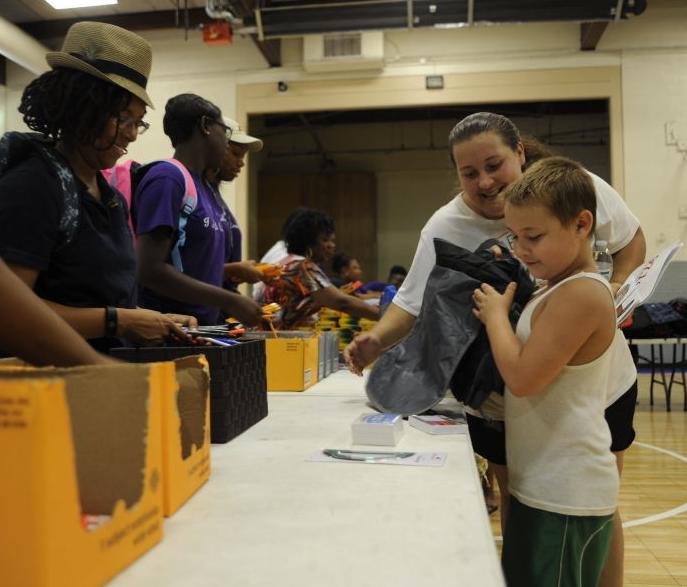 Hundreds of people line up outside the Windsor Recreation Center, waiting to pick up free school supplies in Greensboro on Saturday, Aug. 1, 2015.

Michael Jones, who just turned 5 and will be entering kindergarten this school year, receives a handful of pencils Saturday at the Windsor Recreation Center in Greensboro.

Volunteers offer students a variety of backpacks during a giveaway at the Windsor Recreation Center in Greensboro on Saturday, Aug. 1.

Hundreds of people line up outside the Windsor Recreation Center, waiting to pick up free school supplies in Greensboro on Saturday, Aug. 1, 2015.

GREENSBORO — Hip-hop music pounded inside and outside the Windsor Recreation Center as local residents filed through to pick up free school supplies Saturday morning.

In its seventh annual giveaway, the nonprofit organization I Am A Queen hoped to provide supplies for 1,000 Triad students, Director Alana Allen said.

But when she checked on July 22, the organization, which aims to help young girls improve their self-esteem, had received only $14 in donations.

“I cried,” Allen said. “I asked myself, ‘What are you going to do?’ You really have to humble yourself.”

She decided to keep faith in her partners and donors.

She knew her neighbors’ need.

In its first year, the organization provided supplies for 25 children, she said. It wasn’t much, but it stoked a desire in Allen to build on the success.

The giveaway, which is held each year at the center on the first Saturday in August, has grown every year since its 2009 start, Allen said. It has provided 2,529 backpacks filled with supplies to students in its first six years.

With only $14 in the organization’s account, the goal of serving 1,000 students seemed almost out of reach.

But the donations began pouring in last week.

Tables inside the center were stacked with items Saturday morning. And a line began to form. Hundreds of people stood in the heat outside the building, patiently waiting their turn to pick up supplies.

More than 600 students picked up supplies during the giveaway.

Only a few notebooks remained after all the students were served, Allen said.

“This tells us that there is a need in the community,” she said. “You have people with fixed incomes. We have people who have walked three blocks for this.”

Samantha and John Jones herded their five children through the gymnasium where volunteers handed out items.

Samantha Jones said the giveaway saved them about $100.

“It really helps a large family like this,” she said.

Tiffany Cumbie said her family would have had to get by without some school supplies if not for I Am A Queen.

Sana Richardson took her three daughters, ages 9, 7 and 2, to the event.

“You can network with other single parents,” she said. “It’s a great thing for the kids. It helps out a lot.”

Allen said she couldn’t quite put a finger on how she felt receiving the thanks that people had offered Saturday morning.

“I don’t know what to feel until this is over,” she said. “It’s humbling to meet people who are so grateful. It’s an interesting perspective.”