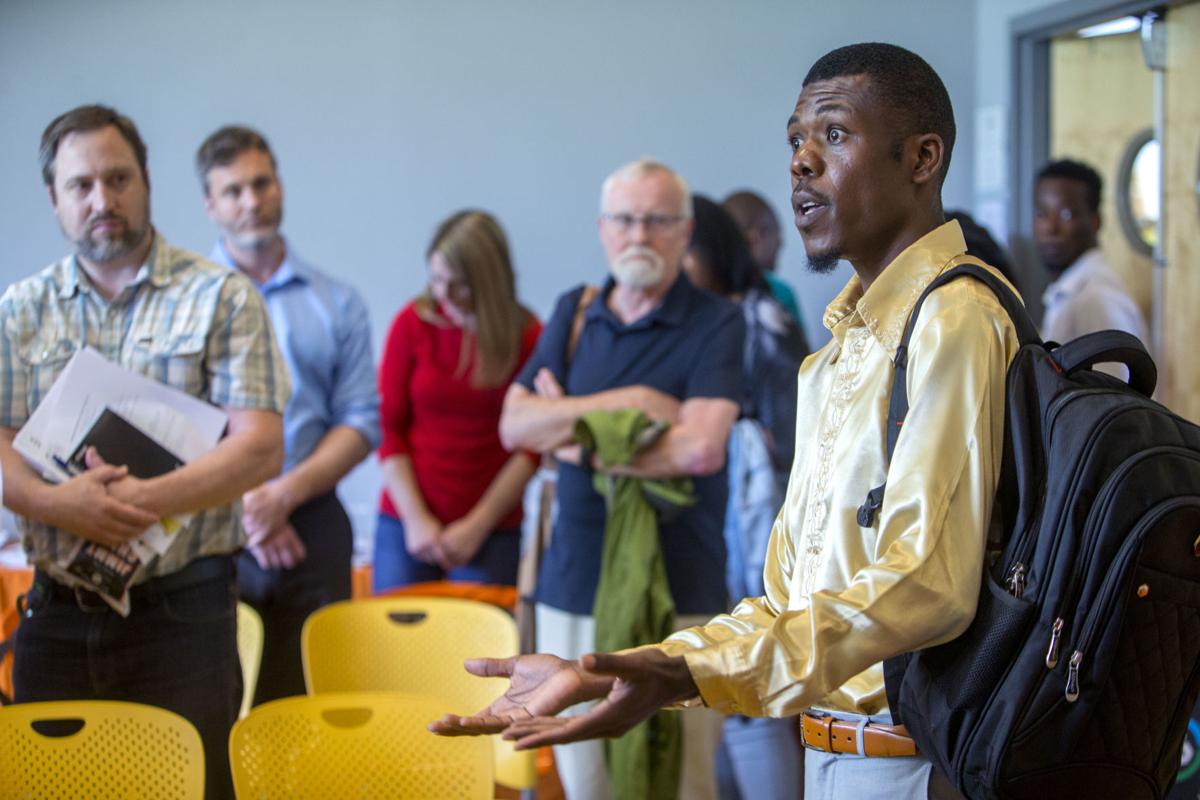 Louis Pasteur Mashengo, a cousin of the parents of five children who were killed in a fatal apartment fire, speaks out during the community meeting on Wednesday. 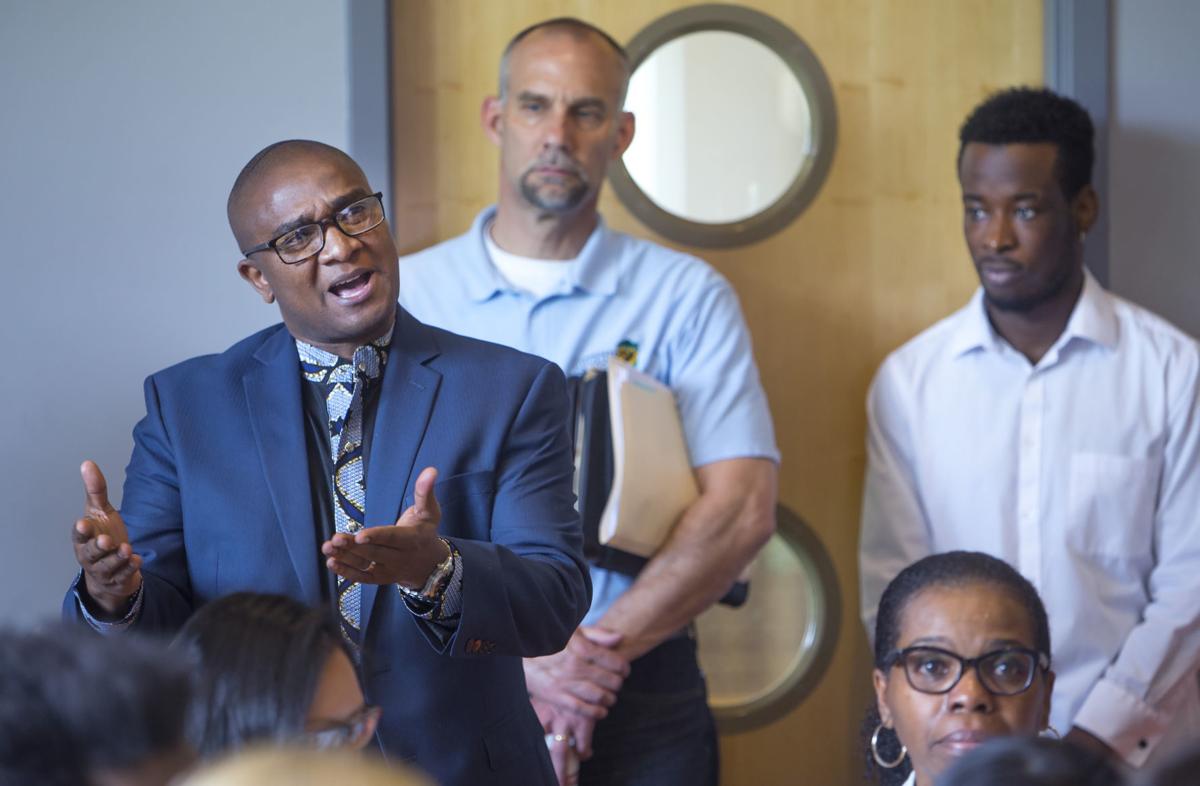 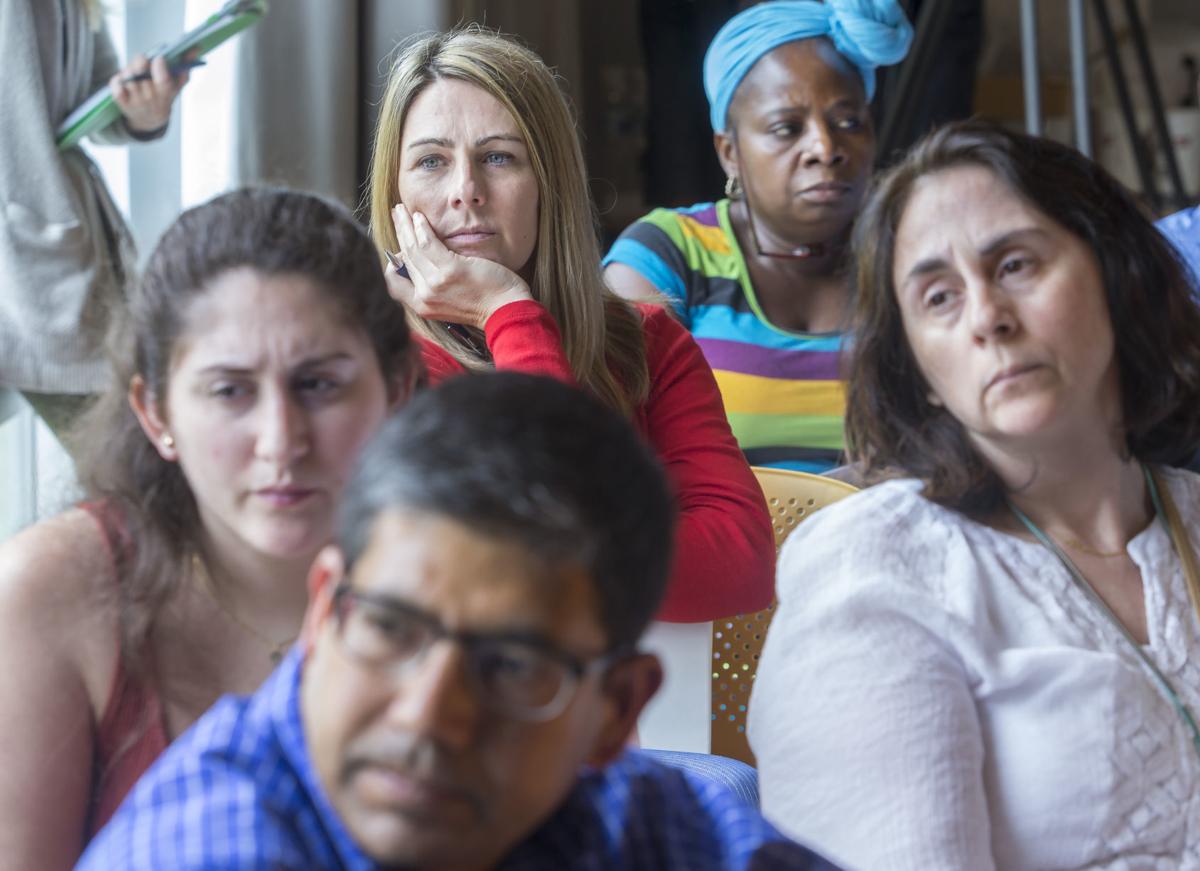 City of Greensboro Human Resources Council held a community meeting to discuss tornado response and outreach after a fatal apartment fire killed five children in photos taken in Greensboro, NC on May 16, 2018. 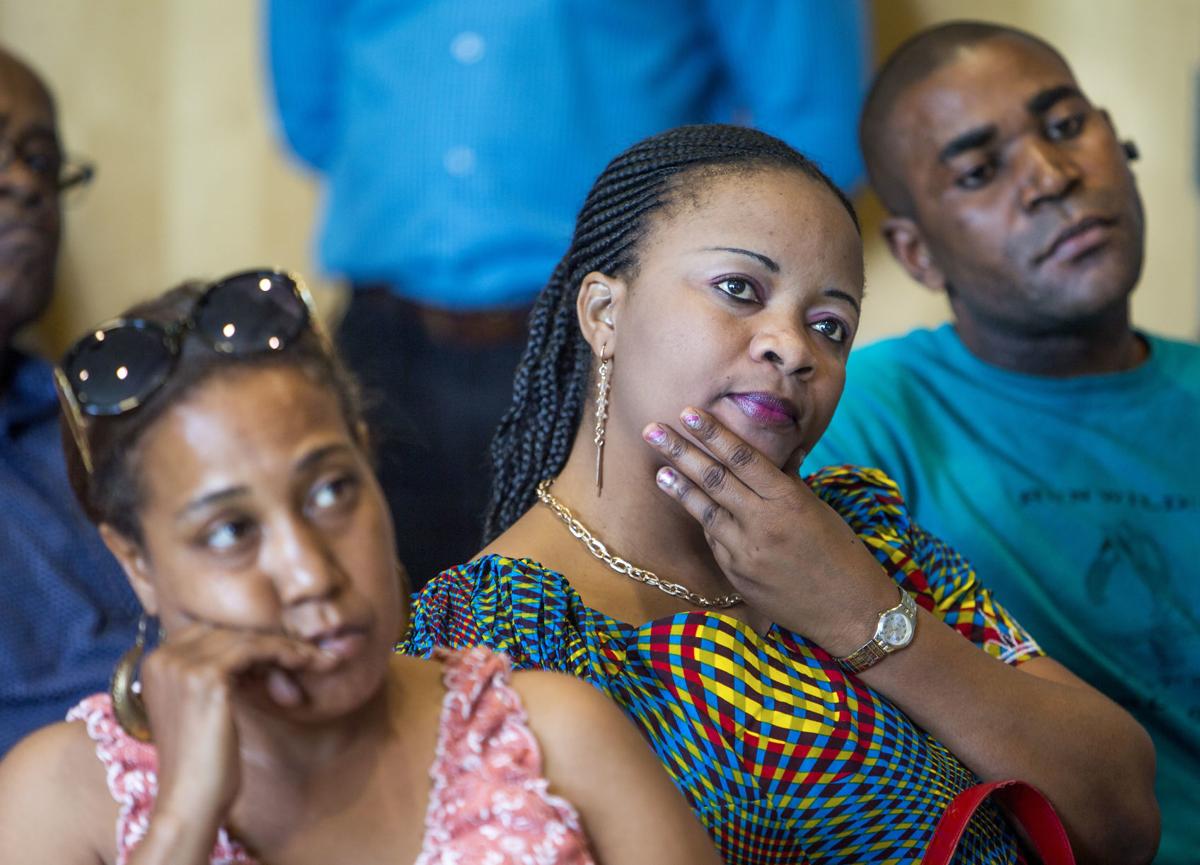 Crystal Black, Bahati Shomari and Saidi Shomari listen during a community meeting to discuss tornado response and outreach after a fatal apartment fire killed five children in photos taken in Greensboro, NC on May 16, 2018. 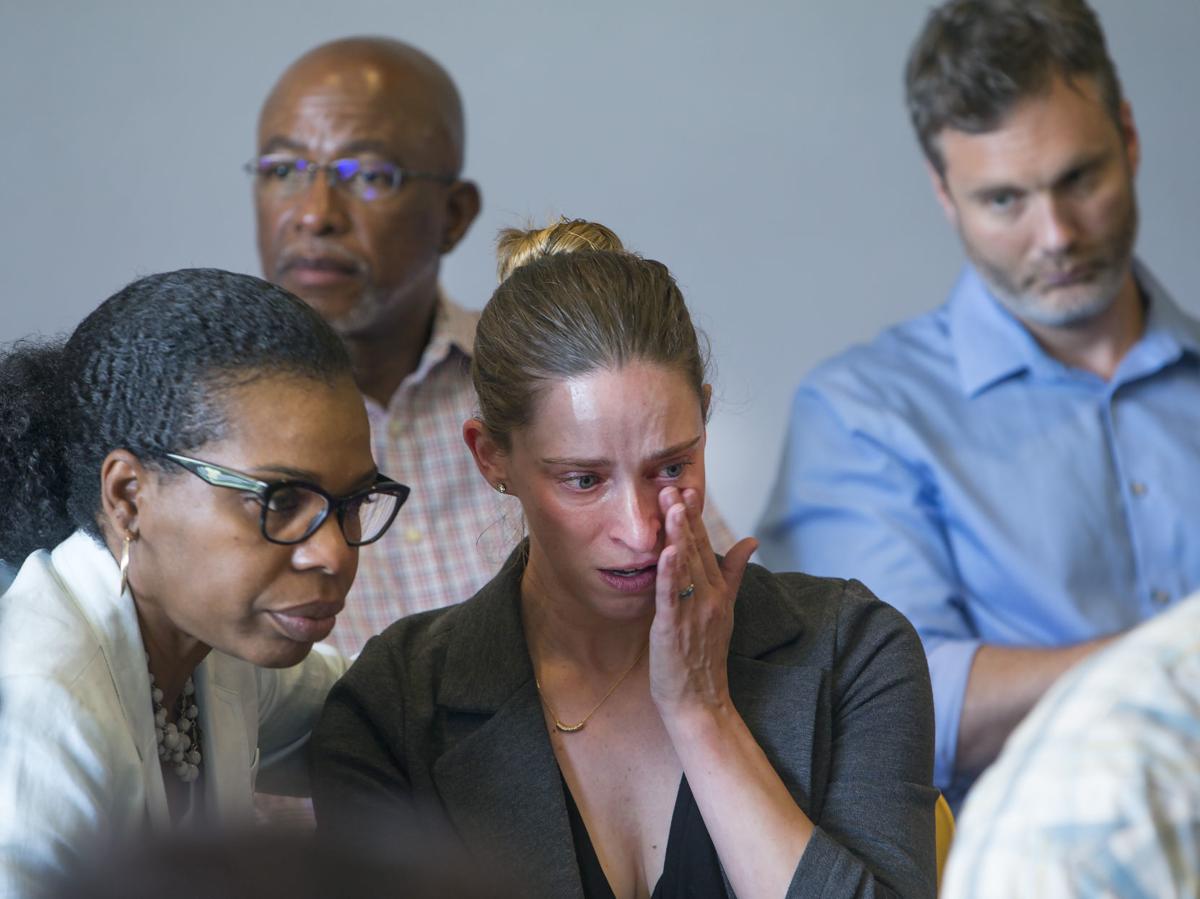 Emotions pour out for the five children killed in a fatal apartment fire during the community meeting. 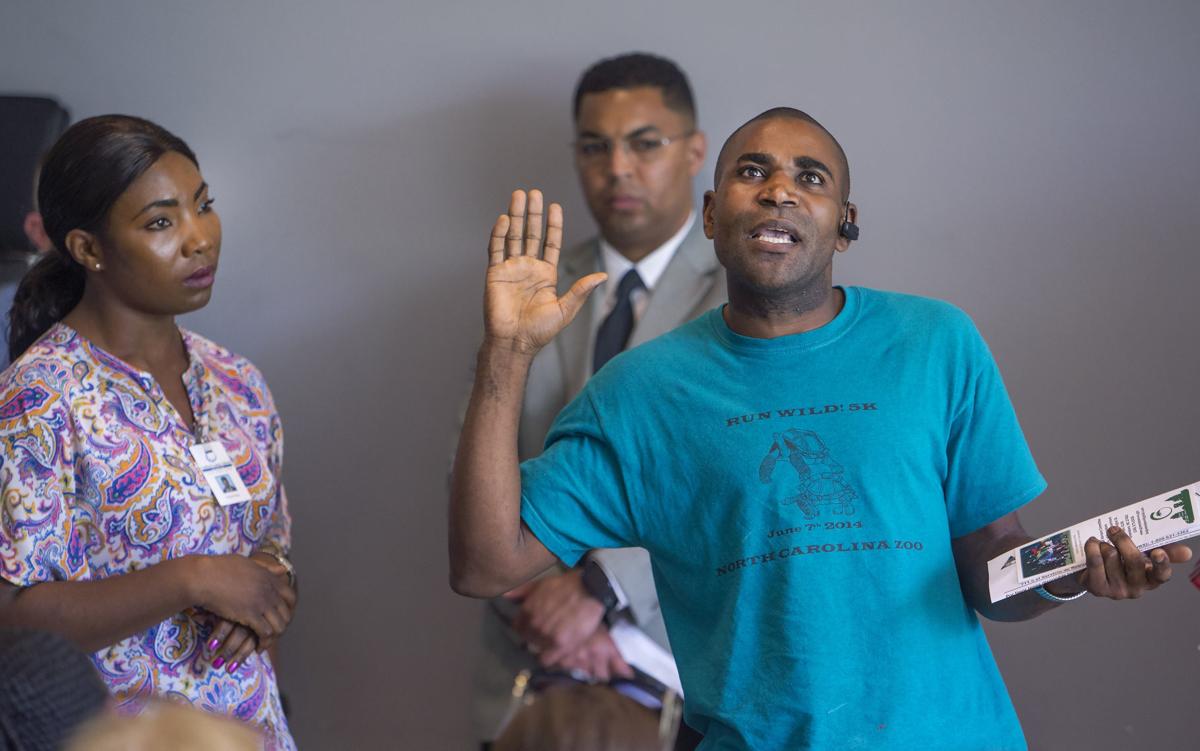 Saidi Shomari talks about living conditions at the apartment complex where five children died over the weekend after a fire. He was at a meeting Greensboro Human Resources Council held to offer outreach after the fire.

Louis Pasteur Mashengo, a cousin of the parents of five children who were killed in a fatal apartment fire, speaks out during the community meeting on Wednesday.

City of Greensboro Human Resources Council held a community meeting to discuss tornado response and outreach after a fatal apartment fire killed five children in photos taken in Greensboro, NC on May 16, 2018.

Crystal Black, Bahati Shomari and Saidi Shomari listen during a community meeting to discuss tornado response and outreach after a fatal apartment fire killed five children in photos taken in Greensboro, NC on May 16, 2018.

Emotions pour out for the five children killed in a fatal apartment fire during the community meeting.

Saidi Shomari talks about living conditions at the apartment complex where five children died over the weekend after a fire. He was at a meeting Greensboro Human Resources Council held to offer outreach after the fire.

GREENSBORO — As Greensboro officials, refugee advocates and immigrants gathered days after the deaths of five children in an apartment fire, many people voiced concerns that the city’s deadliest fire in nearly two decades could have been prevented.

“We shouldn’t have had to come to this point,” said community activist Sandra Isley, as others wiped away tears and some trembled in anger during a meeting of the Greensboro International Advisory Committee, which works with the city’s Human Relations Department.

City officials did announce during the meeting that housing inspectors would go door-to-door early next week at the 3100 Summit Ave. complex to conduct inspections on every unit. Beth Benton, the city’s Code Compliance manager, said that action was possible after five residents — the minimum necessary to take action — had signed a petition.

Fire investigators have yet to determine a cause of the Saturday morning fire, but say it started in the kitchen and they are analyzing the unit’s stove. The apartment had no working smoke or carbon monoxide detectors.

The city’s action comes amid claims that the children’s father reported several small fires near the apartment’s stove to management in the days before the tragedy. It is unclear who the father might have notified about the problems with the stove, but the building’s owners said they had no repair request on file.

“There’s a breakdown at many levels for this to happen,” said Adamou Mohamed, a grassroots organizer for Church World Service, an immigration and refugee program.

Others around him questioned why it has taken so long for the city to get involved.

Benton said the petition to get the city involved is an action that tenants have to initiate — which brought up the needs that immigrants and refugees have that go beyond food and clothing. With language barriers especially, they said, many don’t know their rights.

“I think they were let down by a lot of people,” said Mayor Nancy Vaughan. “I think there is a collective anger that there is a hardworking group of people living in substandard conditions and it’s taken a tragedy of this magnitude to point out a number of shortcomings.”

Because of resources, many end up in low-income rentals like 3100 Summit Ave., which is managed by the Arco Realty Co.

The company, which is owned by Bill Agapion and several family members, has battled the city for decades over several hundred code violations at his extensive properties, many of them having been low-income rentals that fall below housing code standards.

There have been fewer code violations in recent years, but immigration advocates and tenants allege that at that complex the property manager has been slow to make repairs. The units were inspected and in compliance with city housing codes 18 months ago.

Earlier this week, Irene Agapion-Martinez turned over tenants’ repair requests for the past month to a detective and the fire investigator. None were made about a stove in the affected family’s unit, she said.

The North Carolina African Services Coalition placed the family there 18 months ago, when they arrived from the Democratic Republic of Congo as part of a resettlement program. But the agency has since stopped setting up homes there because of complaints about living conditions. Officials with the resettlement agencies say the complex remained attractive to refugees because of the low rent and because it allowed them to live with others who speak their language or understand their customs. Several units there are rented by members of this same family.

Officials have yet to identify the family other than to say the children who died were three boys and two girls between the ages of 18 months and 9 years old. The husband, who works at a local factory, was home with the children but could not get them out.

The wife was working the overnight shift at a chicken plant several counties away. She commutes there with a group of others who share the cost of the drive.

“I can tell you that they are traumatized,” said Franca Jalloh, the advisory committee’s chair, who helped them file an application for green cards.

The family and other people in the program became refugees while escaping violence or extreme poverty in their native countries.

When the United States brings in refugees, they sign contracts with resettlement agencies to find them housing and to provide a support system as they work to become more independent. The agencies put the newest residents through job readiness and cultural orientation classes, among others.

At one point in Wednesday’s meeting, a cousin of the family that lost the children rose from his seat.

“We should look at what is ahead of us,” said Jean Munyambabozi, a High Point church pastor who, like his grieving family, is from the Democratic Republic of the Congo.

“It is not only about the apartment at Summit Avenue,” Munyambabozi said through an interpreter, “It’s everywhere.”

Later, another cousin who lives in the same complex where the children died, raised a cell phone with pictures of black tape around the pipes of a sink in his apartment.

“This is how we live,” said Louis Pasteur Mashengo, who had other images of mold on walls.

Another cousin who lived there but moved away, spoke of rat problems both indoors and outdoors.

“If you have any problem ... and you go to the landlord, you wait for that person for days and days, a week or one month,” Saidi Shomari said.

Joseph Ndugu, who also immigrated from the Congo, said it is hard for people, especially those who come from a place where they are distrustful of the police and government and who are learning to navigate a new country and culture.

“Don’t expect us to walk the same pace as everyone else,” Ndugu said of understanding everything from smoke detectors to who to call when they feel they are in danger.

City officials pledged to do more.

Those agencies and groups helping with the joint funeral for the children are asking for help with clothing to bury them in.

The city has offered free burial plots and others are working on permanent housing for the parents. A gofundme account has been set up to help with expenses.

A gofundme account to help the family has been set up by GSO Refugee Service Providers , at www.gofundme.com/greensboro-house-fire.

The family came to the United States from the Democratic Republic of the Congo in 2016, while escaping violence and poverty.

Officials said Monday there were no working smoke or carbon monoxide detectors in the apartment where the children lived.