GREENSBORO — A federal judge will hold the first hearing in the City Council redistricting lawsuit next week. But it’s not yet clear who will face off in court.

The City Council and six Greensboro residents filed suit this week over House Bill 263, the controversial restructuring and redistricting law passed earlier this month by the General Assembly.

Guilford County Attorney Mark Payne is representing the elections board in the lawsuit. He said Tuesday that he and the board will not take a position on the constitutionality of the new law, but will speak only to whether and how it can be implemented. 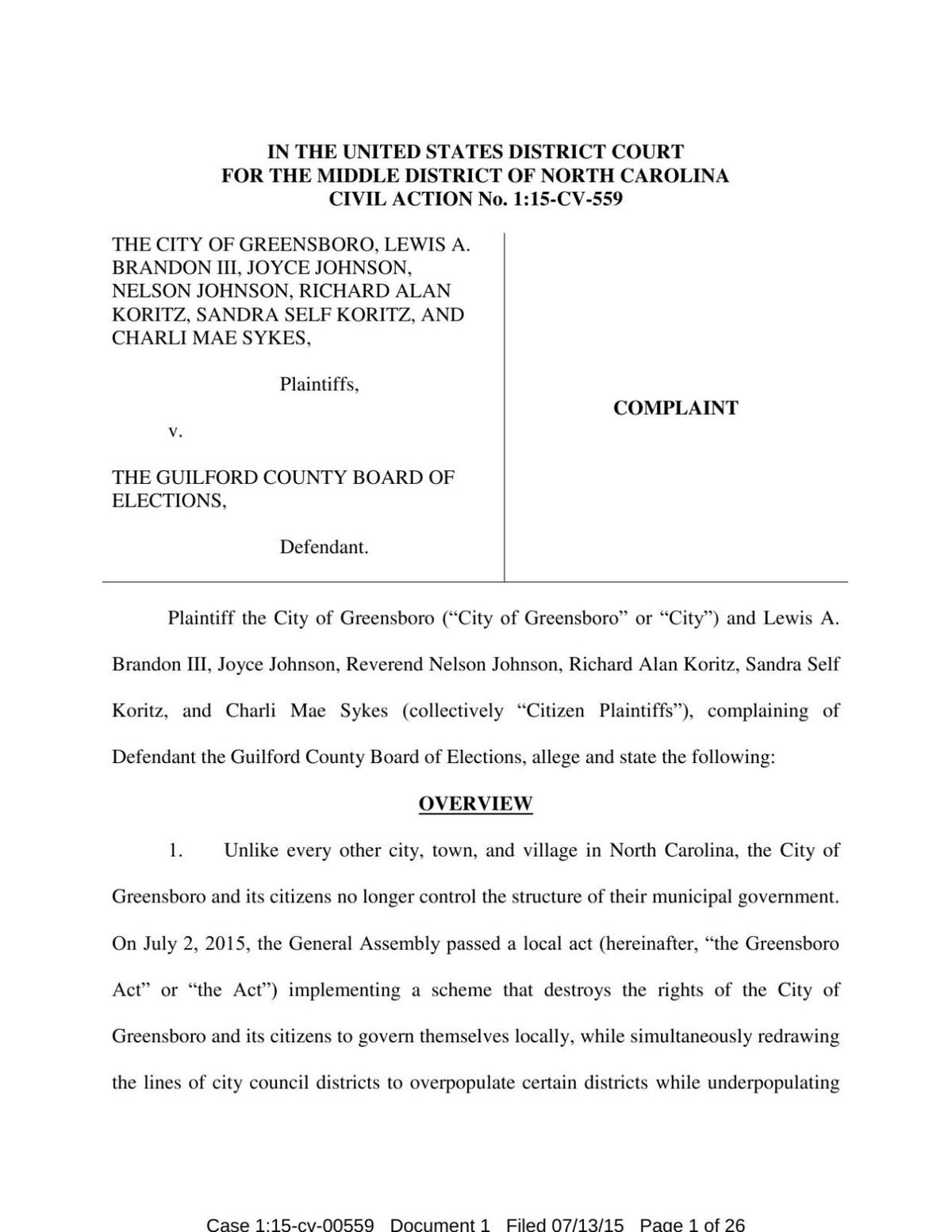 Because the lawsuit alleges violations of the North Carolina and U.S. constitutions, the state attorney general’s office will be given an opportunity to weigh in. A representative from that office participated in a conference call with Judge Catherine Eagles on Tuesday, but it’s not yet clear whether N.C. Attorney General Roy Cooper will assign someone to defend the law.

It’s not clear whether the General Assembly will have legal standing to hire an outside law firm to defend the new law, regardless of whether Cooper’s office assigns an attorney.

In 2013, the General Assembly, with its Republican majority, was clashing with Cooper, a Democrat who is expected to challenge Republican Gov. Pat McCrory in next year's election. Cooper had made public statements about laws passed in Raleigh and the difficulty and expense of defending them in court.

The assembly amended the N.C. General Statutes to give the speaker of the House of Representatives and the president pro tempore of the Senate joint standing as agents of the state in any court case that challenges a state statute or a provision of the North Carolina Constitution.

The intention, they said, was to make sure that laws passed by the General Assembly would be vigorously defended, even if Cooper disagreed with them politically or did not believe they could be successfully defended.

But according to experts, a federal judge may still have to decide to grant the leaders of the House and Senate standing in this or any other federal case.

It seems many Americans have forgotten the function of the courts.

“Although the General Assembly passed a bill saying that they have standing, since this is federal court it would be up to the judge to decide that,” said Gerry Cohen, a former special counsel to the General Assembly. “If no one else is defending the law, the judge may be more likely to admit other people.”

As of Wednesday, the General Assembly had not filed a request to have its own outside attorneys made part of the case.

Jim Phillips of the Greensboro law firm of Brooks, Pierce, McLendon, Humphrey & Leonard, is representing the city in the lawsuit.

Anita Earls, the executive director of the Southern Coalition for Social Justice, based in Chapel Hill, is representing the individual city residents who have joined in the lawsuit.

Phillips has had some recent courtroom success against the General Assembly.

Last year, he successfully argued for the city of Charlotte in its attempt to keep control of Charlotte Douglas International Airport.

In December 2014, Phillips represented the town of Boone when the General Assembly passed a law abolishing its control over its extraterritorial jurisdiction — an area where it controls the zoning even though it is outside town limits.

A three-judge panel unanimously granted the town a preliminary injunction which prevents the law from taking effect until a court rules on its constitutionality.

Part of the argument in the Boone case was that lawmakers in Raleigh had attempted to single out Boone, taking from them powers enjoyed by hundreds of other municipalities in the state.

Similarly, Phillips and Earls are arguing that HB 263 singles out Greensboro, making it the only municipality in the state that cannot alter its form of government or the district lines from which City Council members are elected.

State statute grants those powers to all municipalities, the lawsuit argues, and removing them from Greensboro alone is a violation of the equal protection provisions of the North Carolina and U.S. constitutions.

“It raises a very clear equal protection problem,” said Michael Curtis, a professor of constitutional and public law at the Wake Forest University School of Law in Winston-Salem. “The state is going to have to demonstrate some degree of rationality in passing a law that singles out one city for the loss of these rights.

“From what I’ve seen, I think there’s a serious problem in explaining how this is rational.”

U.S. District Judge Catherine Eagles could hear briefs on the new law as early as next week.

A judge has been assigned in the federal lawsuit filed by the city over a recent City Council redistricting. A hearing in the case could take place as early as next week.

The council voted to sue after a public hearing on the issue that lasted more than two hours and included 60 public speakers who were 2-1 in favor of a court fight.

Monday: The deadline to file briefs in opposition to the city’s request for a temporary restraining order and injunction to prevent the new law from taking effect.

Tuesday: The deadline for city to file a brief in reply.

July 23: Judge Catherine Eagles will hold a hearing in the case.