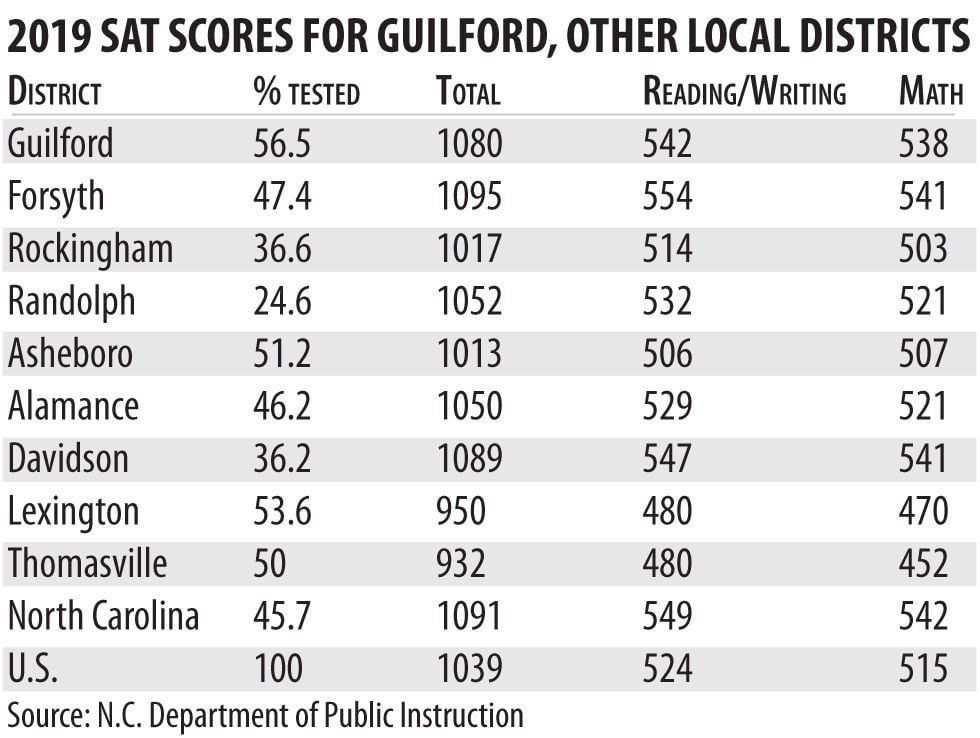 RALEIGH — High schools across the nation are showing off their bragging rights over the latest round of SAT results, with the Early College at Guilford posting the top average score in North Carolina.

On Tuesday, the N.C. Department of Public Instruction posted online the SAT scores for the Class for 2019 for every North Carolina school system and public high school. The average score for North Carolina public school students rose 1 point this year to 1091, 52 points above the national average for public schools.

“After the previous year’s gain of 16 points, North Carolina students continued to show good achievement,” N.C. Superintendent of Public Instruction Mark Johnson said in a news release Tuesday. “These results remain an encouraging sign that more students in the state are graduating from high school well prepared for post-secondary education or other good options to gain skills needed for 21st century jobs.”

At 1080, Guilford County Schools fell below the state average but well above the national average. Guilford ranked No. 4 among the state’s five largest school systems with Wake (1155) at the top, followed by Charlotte-Mecklenburg (1103) and Winston-Salem/Forsyth County (1095). Cumberland County was fifth with 1029.

The Early College at Guilford, which attracts the top students in the county, had the highest average score —1456 — of any high school in the state. The N.C. School of Science and Mathematics, a public boarding school in Durham that attracts academically gifted teens from across the state, had the second-highest score in the state at 1437.

The SAT and ACT are the two main college admissions exams taken by high school students. The SAT has slipped in prominence in North Carolina since the state began requiring public high school juniors to take the ACT in 2012.

North Carolina is no longer one of the worst states in SAT performance. But the improvement may be due to how fewer students are taking the test now that they can take the ACT for free but have to pay for the SAT.

In 1996, when the SAT was the dominant exam for North Carolina students, the state’s average SAT score was ranked 48th nationally. But many of the states with higher scores also had lower SAT participation rates because the ACT was the main test there.

The SAT was overhauled in 2016 with changes that lowered the maximum score to 1,600, eliminated obscure vocabulary words, dropped the penalty for guessing and made the essay optional.

The College Board, which owns the SAT, has cautioned against comparing current scores to tests taken before 2016.

Go to http://www.ncpublicschools.org/accountability/reporting/sat/2019 to view the full SAT report.