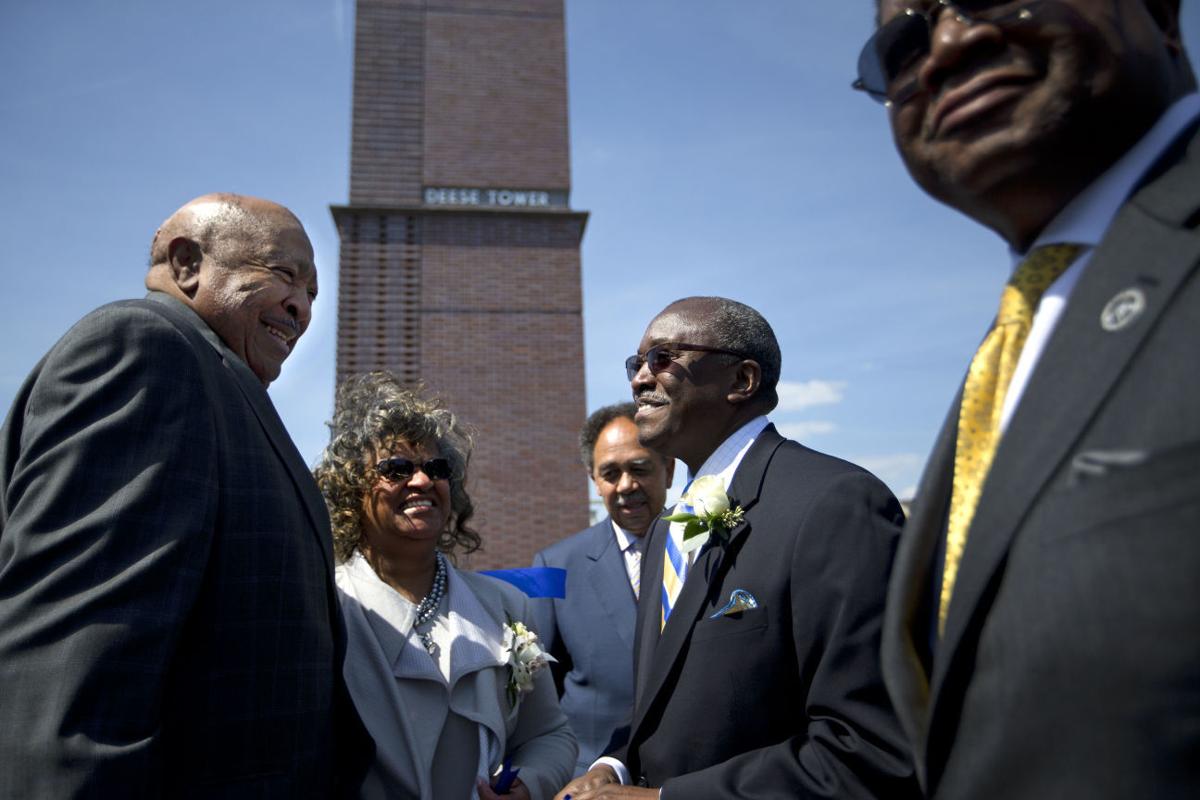 Willie Deese (second from right), whose donation paid for the Deese Clock Tower, chats with Quiester Craig (far left), former dean of the N.C. A&T College of Business and Economics, after the ribbon-cutting for the new tower on March 24, 2016. 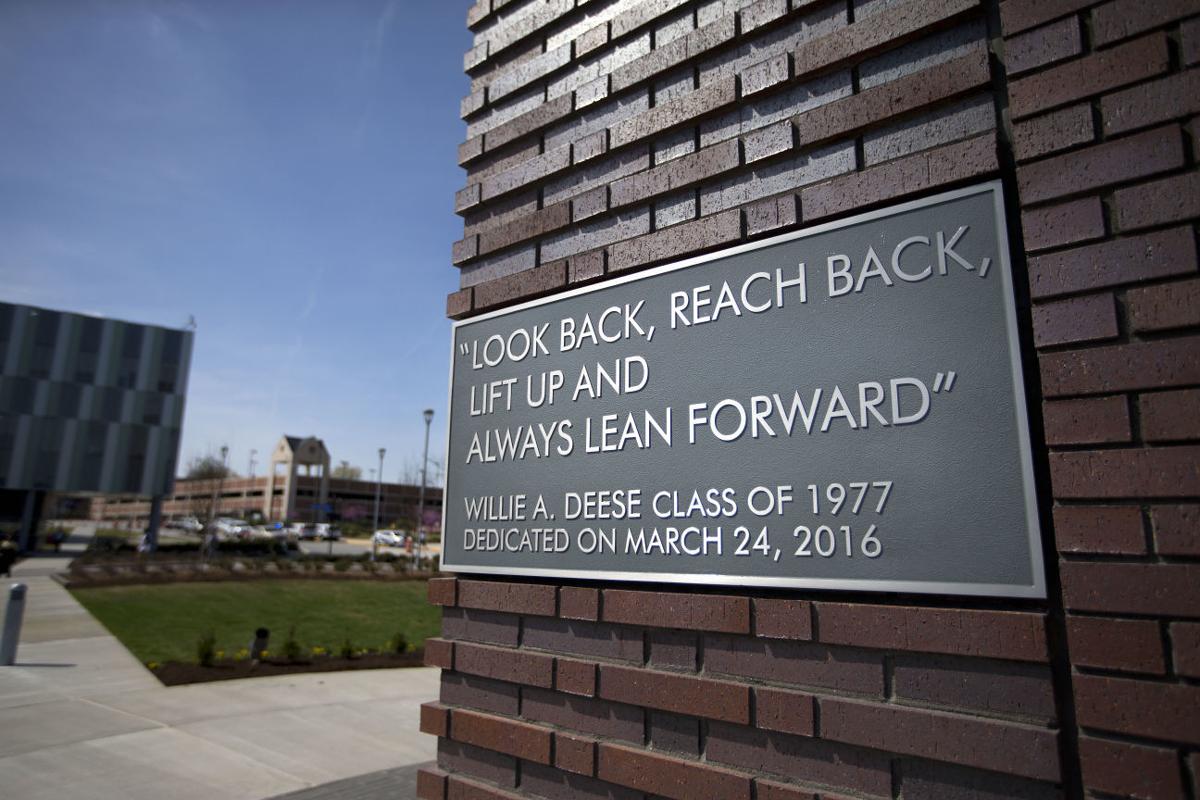 A quote from N.C. A&T alumnus Willie Deese is seen on the new Deese Clock Tower on Thursday, March 24, 2016, in Greensboro, N.C. 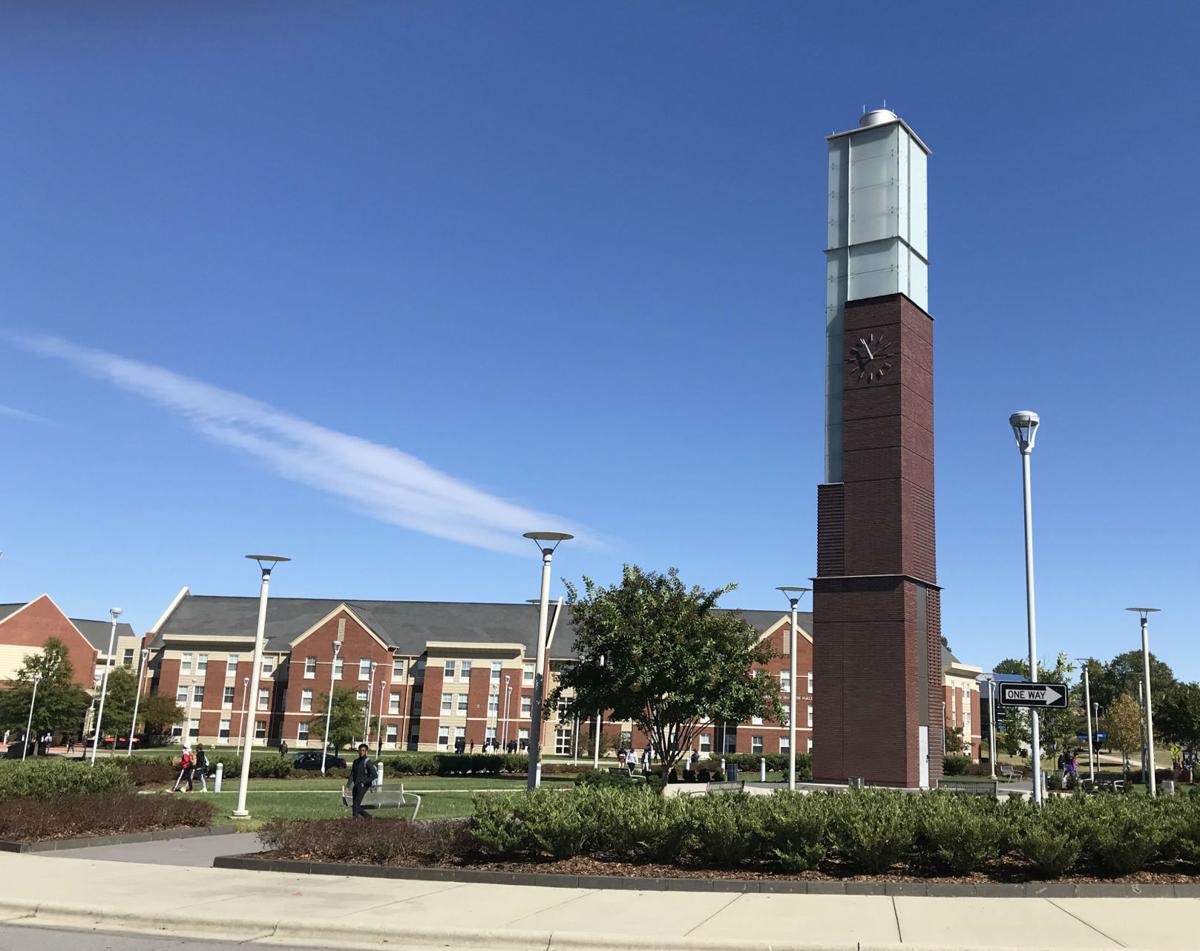 Willie Deese (second from right), whose donation paid for the Deese Clock Tower, chats with Quiester Craig (far left), former dean of the N.C. A&T College of Business and Economics, after the ribbon-cutting for the new tower on March 24, 2016.

A quote from N.C. A&T alumnus Willie Deese is seen on the new Deese Clock Tower on Thursday, March 24, 2016, in Greensboro, N.C.

The university announced Wednesday it has named the college for alumnus Willie Deese, a retired pharmaceutical executive. The new name — the Willie A. Deese College of Business and Economics — follows a $5 million donation from Deese to A&T.

It’s the first academic college at A&T to carry a person’s name.

“Willie’s generosity to our alma mater has inspired a new generation of alumni to give back to this great institution and impact the lives of tomorrow’s leaders,” Chancellor Harold Martin said in a statement. “He is the personification of Aggie Pride.”

Deese has a long association with A&T and has given more money to the university than anyone else.

Deese graduated from A&T in 1977 with a degree in business administration and later got an MBA at what’s now Western New England University in Massachusetts. He worked for four decades in the pharmaceutical industry and became president of the manufacturing division of Merck & Co. before he retired in 2016. A native of the Mecklenburg County town of Davidson, Deese now lives in Chapel Hill.

Deese is a former chairman of A&T’s Board of Trustees. He was A&T’s undergraduate commencement speaker in May and holds an honorary doctorate from the university. He’s also co-chairman of A&T’s current fundraising campaign.

His name is found all over campus. The ballroom in A&T’s new student center is named for him. The campus clock tower, built with his million-dollar gift in 2016, is named for Deese and his wife, Carol Chalmers Deese. The auditorium inside one of the business school’s buildings is named for his parents.

In a statement, Deese said he didn’t seek to put his name on A&T’s business college. His gift, he said, “represents an enduring commitment to supporting the College of Business and Economics steeped in the support, commitment and dedication I saw its leaders demonstrate to my generation, allowing us to participate in corporate America in a meaningful way.

“Just as the door of opportunity was opened to us, I have a responsibility to make sure those doors remain open in a contemporary way.”

A&T’s Deese College of Business and Economics has 1,770 undergraduate and graduate students enrolled in five different departments. The business management major is the second most popular undergraduate major at A&T. Enrollment in the college has grown by more than 30% in the past five years, according to the university’s factbook.

A&T plans to honor Deese at a formal ceremony in February to coincide with a Board of Trustees meeting. Trustees are scheduled to meet Feb. 27-28.

An N.C. A&T graduate tells the story of homecoming to children

La-Donia Alford-Jefferies has sold 1,000 copies of her illustrated children's book "Homecoming" since she self-published it in the spring. She'll sign books at two events this week.

The university threw itself an all-day birthday party.

Greensboro roads to be closed Tuesday for UNCG's 'Storm the Streets'

'Just Mercy' starring Michael B. Jordan and Jamie Foxx to get advance screening at N.C. A&T

The film starring Michael B. Jordan and Jamie Foxx will be shown at 6 p.m. Monday in Harrison Auditorium on campus.

The university will use a $1.5 million grant from the Weaver Foundation to expand international study opportunities.