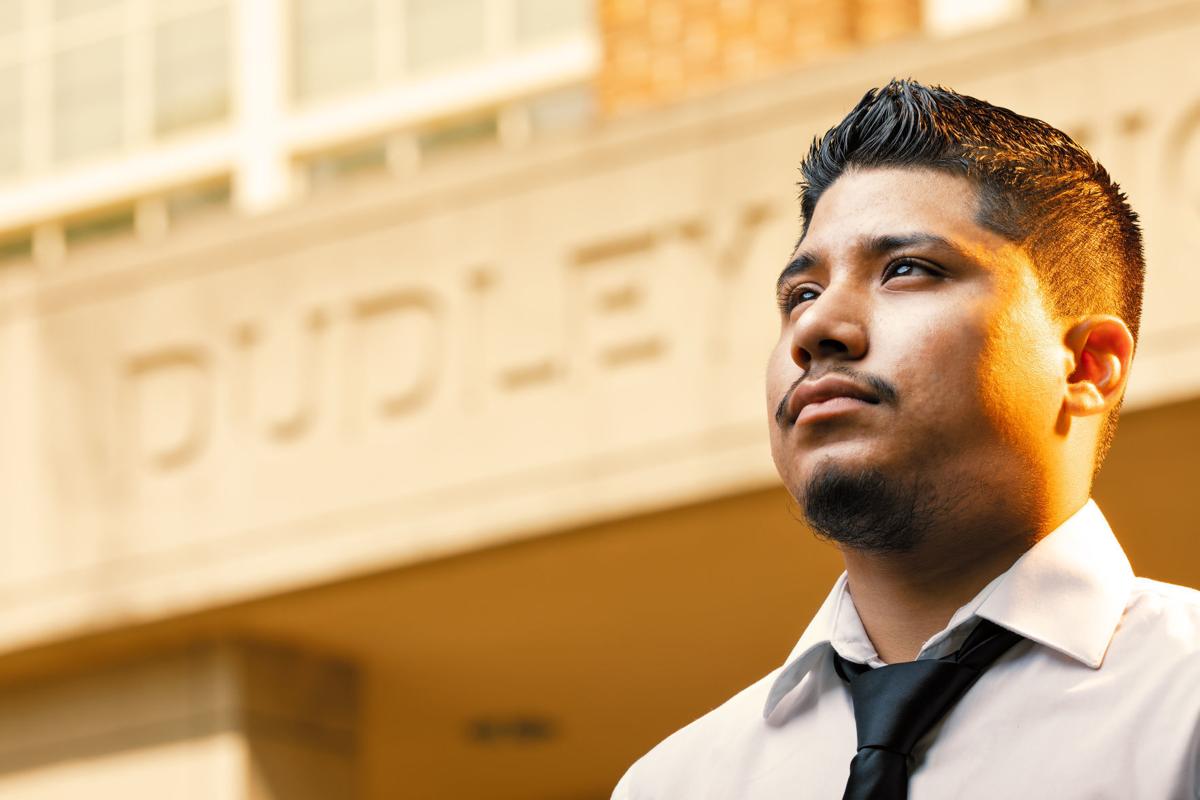 Dudley High School graduate Jose Luviano-Mondragon is heading to N.C. State in Raleigh to study computer engineering, and he will be the first person in his family to attend college. 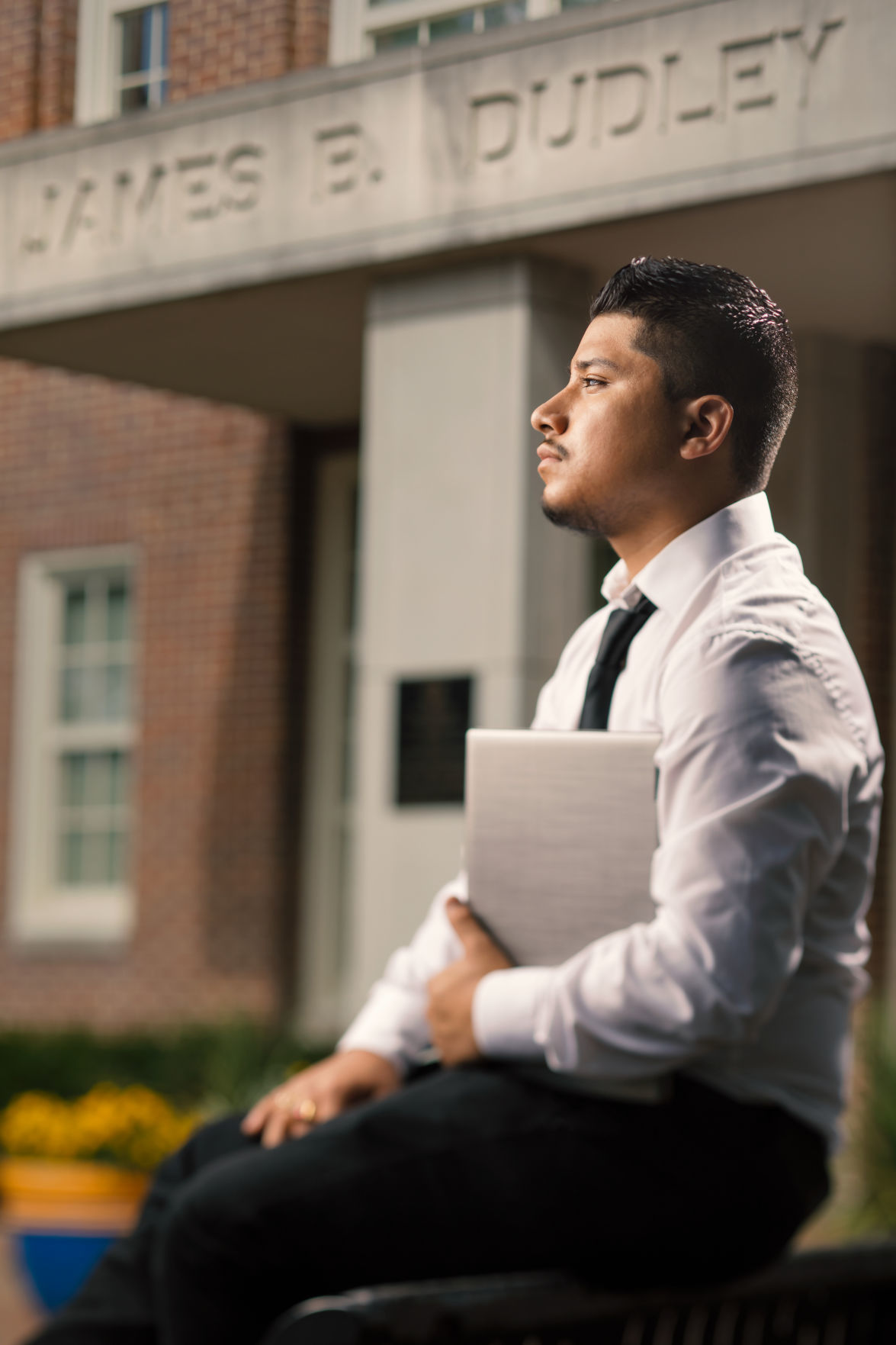 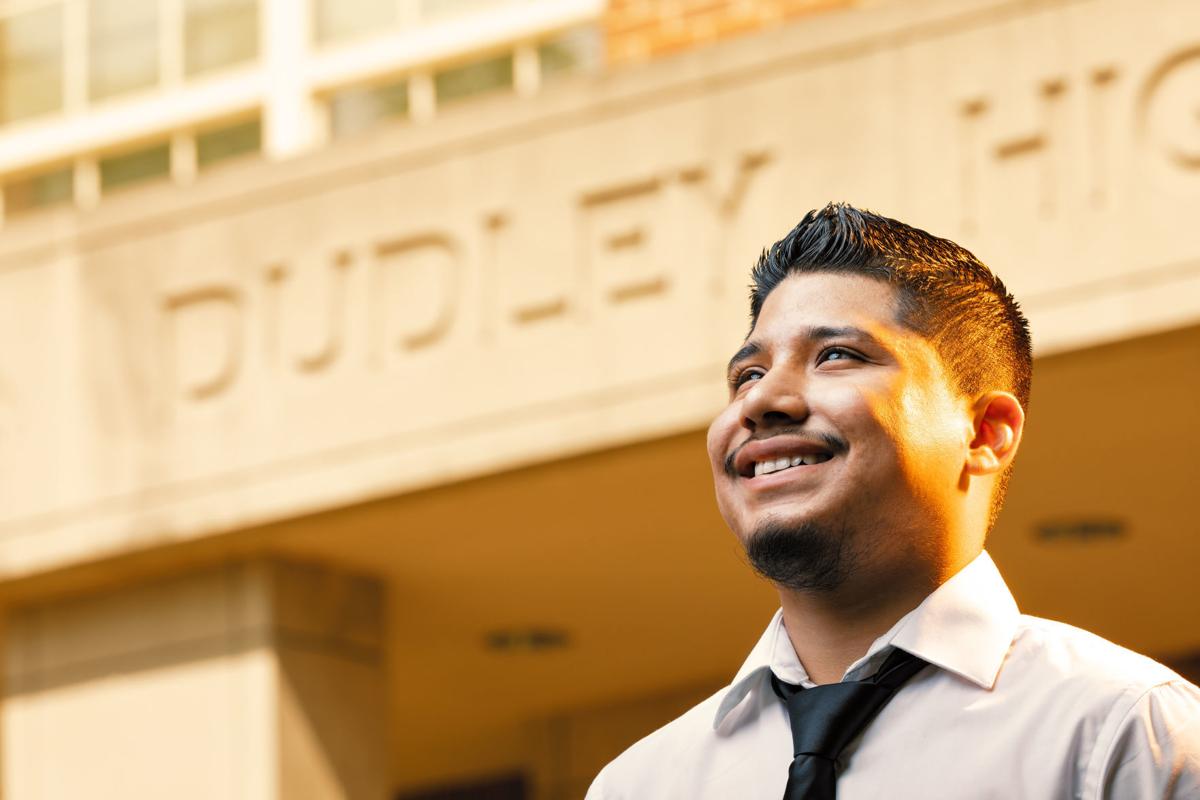 Dudley High School graduate Jose Luviano-Mondragon is heading to N.C. State in Raleigh to study computer engineering, and he will be the first person in his family to attend college.

Close to his right ear, Jose Luviano-Mondragon has a little pink circle.

It’s about the size of a dime, and it’s hard to notice unless you know where to look. But Jose knows it’s there. He can see it and remember a Friday night three years ago — of going to his aunt’s house and delivering three orders of enchiladas made by his grandparents.

If only that was it.

That little pink circle shows where Jose was shot.

Jose’s grandparents had turned their house into a restaurant for family and friends. They do it often, and when they do, they make traditional food endemic to their homeland of Mexico and ask Jose and his uncle to make deliveries to families and friends around Greensboro.

That night, his uncle drove. They had a delivery for Jose’s aunt. They pulled into the neighborhood, and Jose had a gut feeling something was wrong. He couldn’t figure out what it was when his uncle pulled into his aunt’s driveway and handed him the enchiladas.

Jose had done this so many times before. With the enchiladas in his hands, Jose took one step out of the car. Immediately, Jose tumbled back inside.

Jose had been shot.

He and his uncle ran from the car and banged on his aunt’s door.

“Let us in!” his uncle screamed.

She opened the door and saw her nephew covered in blood.

Jose didn’t answer. He was in shock. His uncle was screaming. His aunt’s husband called the police and 911. Jose called his mom.

The paramedics and police came. The police asked them what happened, and the paramedics checked Jose’s pulse and cleaned up his arms and legs. They asked him a few questions before loading him onto a gurney, rolling him into an ambulance and rushing to a hospital.

In the ambulance, Jose saw images flash through his mind like scenes from incredibly familiar movie.

He saw his parents, his family, his friends and his dog, Bella, a chihuahua.

“Don’t close your eyes!” he told himself. “Everything is going to be OK!”

Jose didn’t know. He could only hope and pray.

“God, I hope you can work your power, and everything comes out good. Please.”

Jose spent three days in the hospital. The bullet didn’t go very far into his cheek. He left the hospital on a Monday, with an ice pack on his swollen right cheek.

His recovery took three months. He had his mouth wired shut, and the doctors removed the bullet after three surgeries. When he went back to school in January, he got lots of questions. He hated it. He wanted everything to be OK, back to normal.

Jose spent three months in therapy trying to cope with the unconceivable. In the meantime, he found out from police that the shooting was a case of mistaken identity. The shooters thought Jose and his uncle were someone else. No one has ever been arrested.

Yet, Jose sees the good that has come out of something that was incredibly bad.

“It’s sparked a growth in me,” he says of the shooting. “I have truly realized you only have one life to live. Anything can happen in the blink of an eye. Me and my uncle, we were in the wrong place at the wrong time.”

Jose is the oldest of three. His dad works in landscaping, and his mom works for a cleaning company. Jose graduated a few weeks ago from Dudley High, seventh in his class of 264. Later this summer, he will start classes at N.C. State and major in computer engineering.

He will be the first in his family to go to college.

“I believe that God saved my life,” he says. “I was too young, and I still need to accomplish many more things in life. So, I feel like that’s the main reasons I got a second chance at life. I have so much to accomplish.”

For Jose, what he believes he has to accomplish is something he discovered in Donald Sweeper’s engineering class.

“It just blew my mind,” he says today.

Sweeper started the Panther Coding Club. He brought in a student from N.C. A&T to help. Jose became the club’s president.

After Jose came back to school following the shooting, he and three other club members competed in the Healthy App Innovation Challenge, a coding competition in Winston-Salem. They had to create a computer app about healthy eating in school.

The Panther Coding Club competed against eight other schools. They won.

His family has a desktop computer at home. Jose shares that computer with his younger sister. He also uses his phone as well as a computer at school to complete his work.

But because of the competition, he earned a laptop because of who he is — a skilled teenage coder bound for N.C. State.

“I share a lot of things with my sister, and that is not a bad thing,” he says. “But knowing I could use it for me, that made me feel happy. It was mine.”

Davis created the Rose From Concrete scholarship, and according to its description, the scholarship is awarded to a student who “exemplifies the grit, intestinal fortitude, and perseverance to overcome adversity and become a beacon of hope for the world. “

In a seven-sentence Facebook post about Jose, Sweeper wrote: “Seeing him rise from the ashes, not giving any excuses to give his best in all things, encouraged me to continue teaching. … Again, I am very proud of seeing Jose still on the grind, and I believe he is one that will help save our world one day.”

Jose reads that post at least once a week.

“When I read it, it’s such a great feeling,” he says. “I know I have people who have my back. I am beyond grateful. I’m blessed.”

Jeri Rowe, a former columnist at the News & Record, is the senior writer at High Point University. He interviewed Jose Luviano-Mondragon as part of a project for Guilford County Schools.

Guilford County graduates have big plans for their futures

Their year was cut short and their graduations were drive-through experiences, surrounded by teachers, staff and volunteers all in masks.