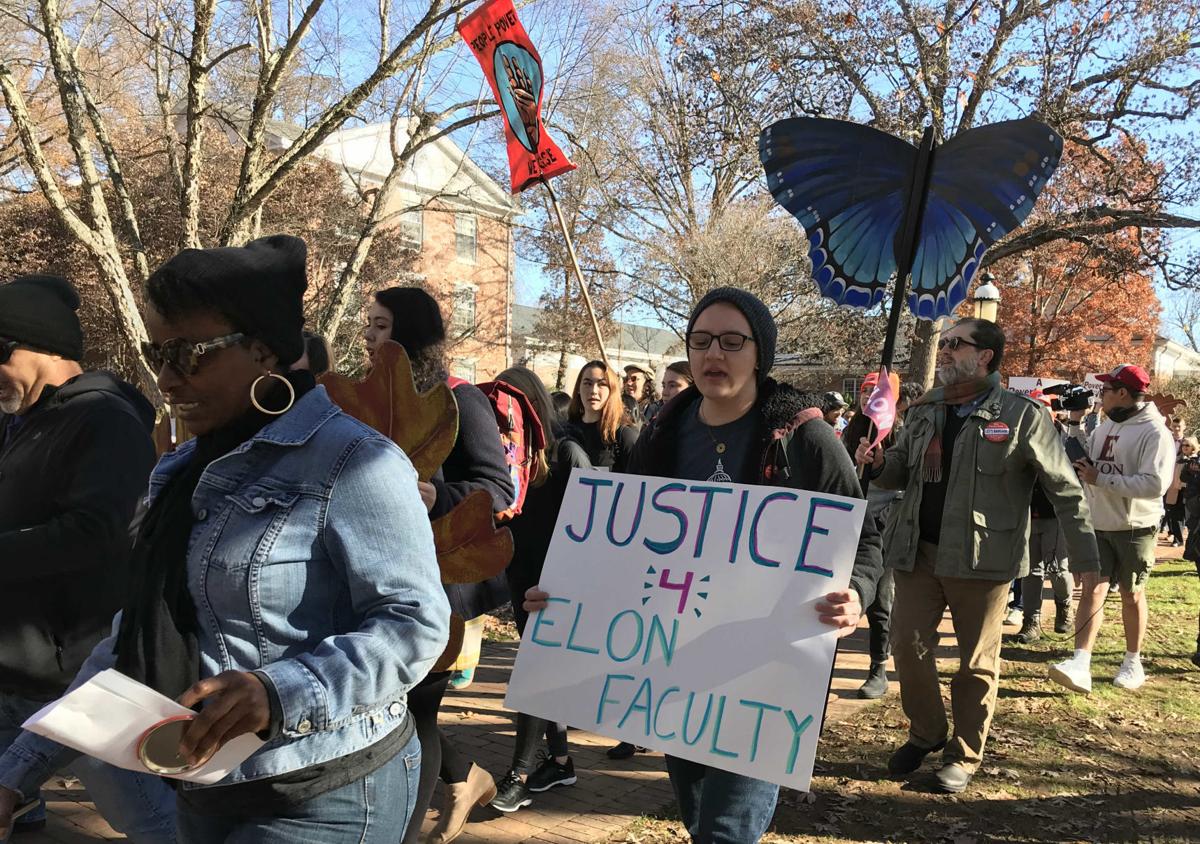 Elon University union members and supporters march across campus Thursday. The new union is calling on university leaders to drop their opposition to the group. 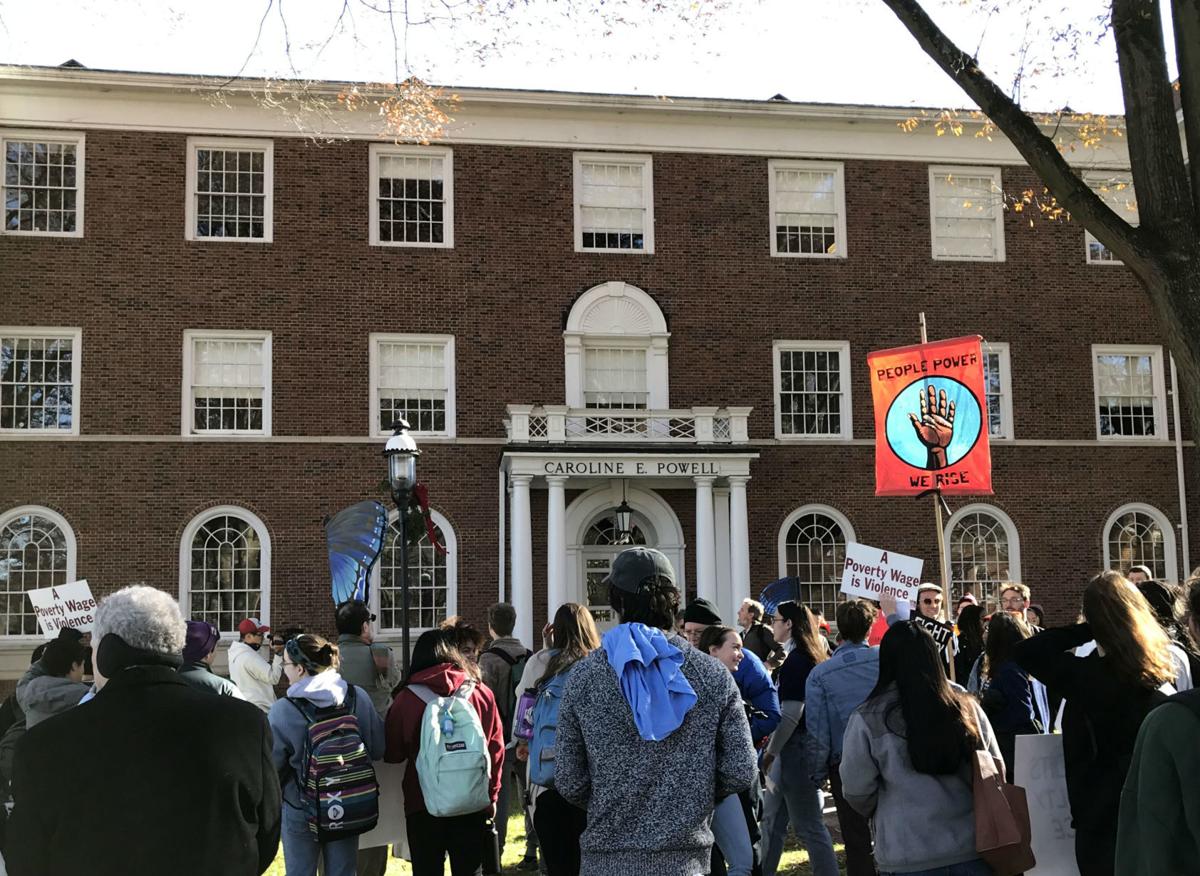 Elon University union members and supporters rally outside the administration building that contains the president’s office on Dec. 5, 2019. 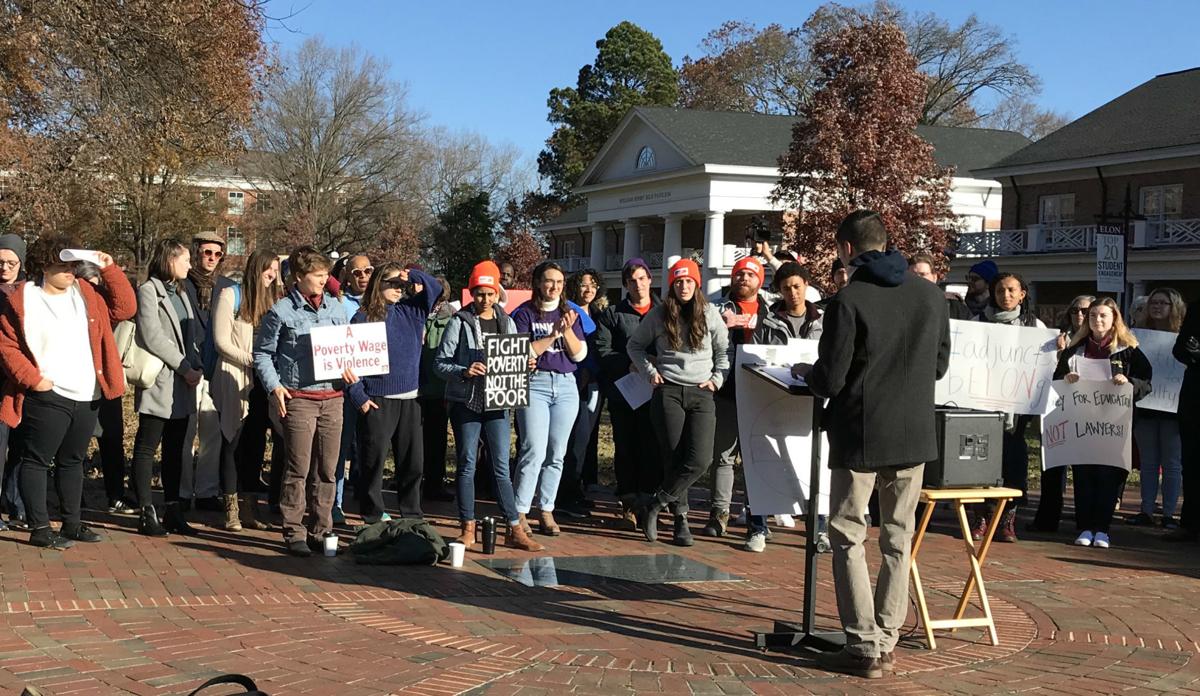 Supporters of the new adjunct faculty union at Elon University listen to a short speech by Chris Shreve, president of the Duke Faculty Union at Duke University, during a rally on the Elon campus on Thursday, Dec. 5, 2019. 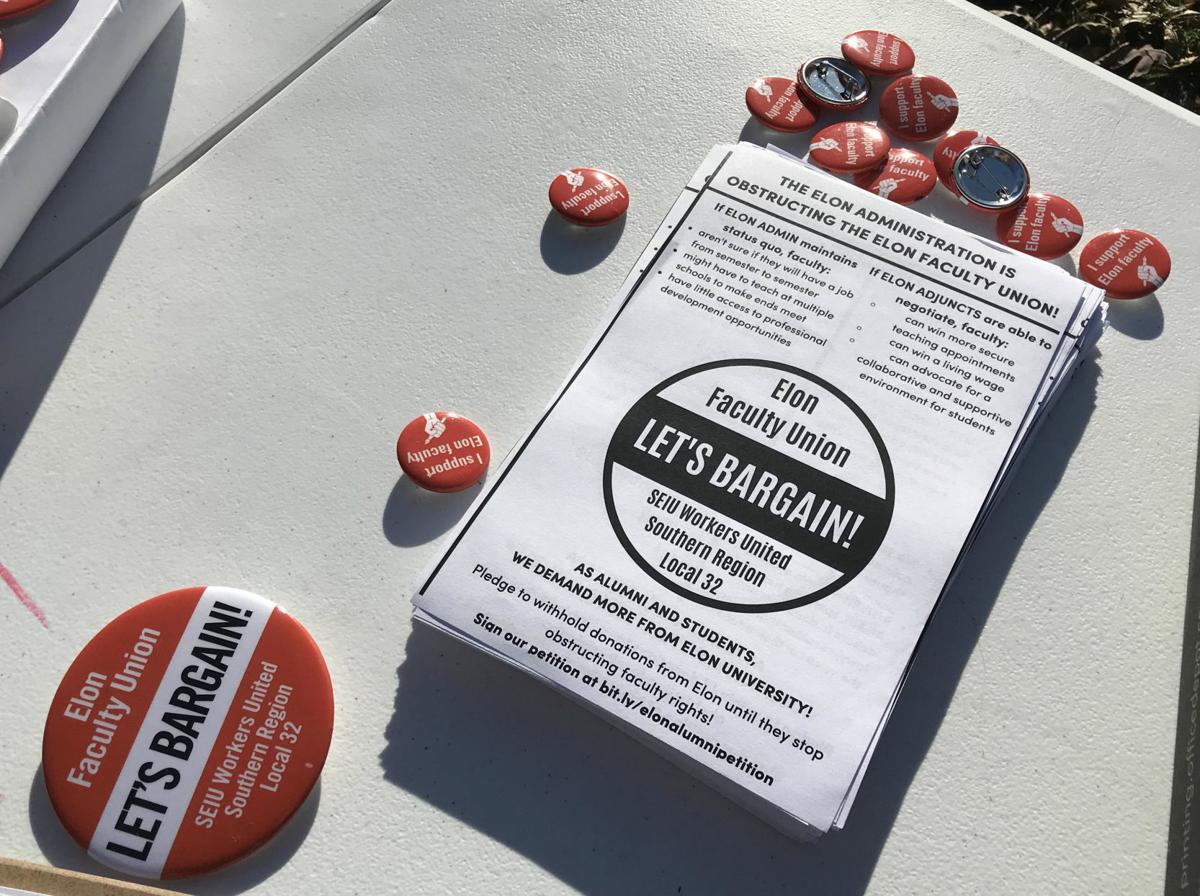 A display of buttons and leaflets at the Elon University union rally on campus on Dec. 5, 2019.

Elon University union members and supporters march across campus Thursday. The new union is calling on university leaders to drop their opposition to the group.

Elon University union members and supporters rally outside the administration building that contains the president’s office on Dec. 5, 2019.

Supporters of the new adjunct faculty union at Elon University listen to a short speech by Chris Shreve, president of the Duke Faculty Union at Duke University, during a rally on the Elon campus on Thursday, Dec. 5, 2019.

A display of buttons and leaflets at the Elon University union rally on campus on Dec. 5, 2019.

ELON — Three months after their new union gained official recognition, adjunct professors at Elon University called on administrators to sit down and negotiate with them.

In a rally on campus Thursday morning, union members and supporters demanded that the university give up its fight against the union.

“We unionized because we deserve a seat at the table,” said Sarah Bloesch, an adjunct assistant professor of religious studies at Elon and a member of the union’s organizing committee. “We want to belong — and not just belong but be recognized as critical and important to this university.”

Adjunct professors at Elon and other universities are often part-time instructors who are usually paid much less than full-time tenured faculty members. Though some adjuncts work full time at one institution, they often have little job security — some are hired at the start of each semester, or not at all — and some teach at multiple schools each semester to earn enough money to live on. Adjunct faculty members often don’t get health care or other benefits from their employers.

About a quarter of Elon's professors work part time at the university.

Elon adjuncts say they want better pay, more job security, access to professional development and permission to mentor students. Adjuncts also say they want to work with administrators to improve Elon. They pointed out Thursday that they contribute to Elon’s strong academic reputation and helped Elon to a national No. 2 ranking in undergraduate teaching in U.S. News & World Report’s most recent college guide.

“A union is not an outside force,” Chris Shreve, the president of the Duke Faculty Union, told the crowd at Thursday’s rally. “It is an organic, integrated part of the university.”

The rally drew Elon union members, students and faculty members from Elon and several nearby universities, including UNC-Chapel Hill and UNCG, and Burlington Mayor Ian Baltutis, an Elon alumnus. The group met in a campus quad and listened to several speakers, then marched with drums, banners and chants to the main administration building that holds the president’s office. No administrators came out to talk, and a university spokesman declined comment Thursday.

In a statement posted on Elon’s website Wednesday, President Connie Ledoux Book said the university has no plans to drop its appeal of the National Labor Relations Board’s latest ruling in the union’s favor.

But in recent conversations with Elon faculty and staff members, Book wrote, “these discussions have helped me understand details about employment at Elon and the issues faced by adjunct faculty members at institutions across the nation. With each conversation, I have been reminded of the deep conviction each member of our community, whether full-time or part-time, has for student success.”

Thursday’s rally marked the one-year anniversary of the public announcement of the union organizing effort at Elon. After announcing their plans in late November 2018, Elon adjuncts voted in March to unionize, with 62% siding with the union. The university unsuccessfully contested the outcome of that vote.

In September, after the Elon union was certified by the NLRB’s regional office in Atlanta, the university appealed that decision, too. Union organizers said they don’t know when they might get a final ruling from the full labor board in Washington.

Elon adjuncts have been working with Faculty Forward, a Service Employees International Union effort to organize college faculty members and graduate students across the country.

The Elon union, after the NLRB formally recognized it in September, is now known as SEIU Workers United Southern Region Local 32. It’s the second faculty union in North Carolina after Duke faculty members organized in 2016.

Editor's note, Dec. 6: This story has been updated to clarify the number of part-time faculty members who work at Elon.

Adjuncts win latest round in union bid at Elon University

A National Labor Relations Board hearing officer is recommending that the labor board's regional office reject objections to a union vote filed by Elon University.

The university filed a formal objection with the National Labor Relations Board over alleged conduct by the Service Employees International Union.

They became the second group of faculty members at a North Carolina private university to seek union representation. Duke’s adjuncts were the first to organize in 2016.