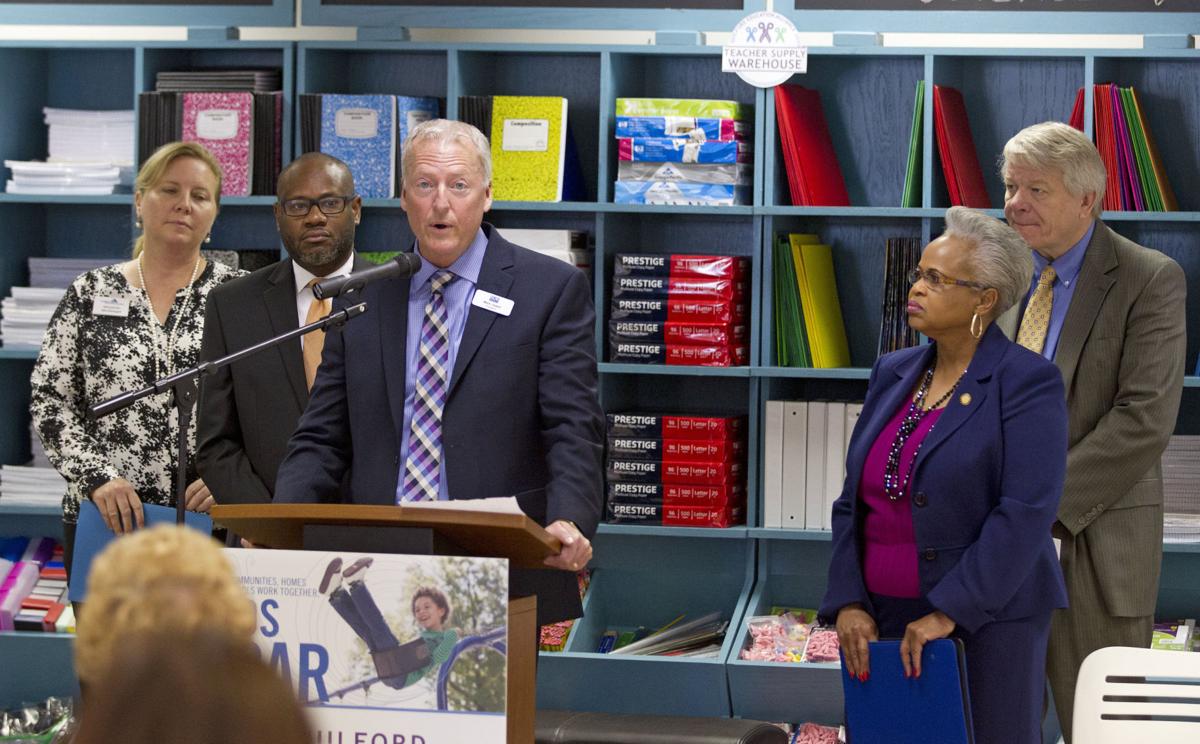 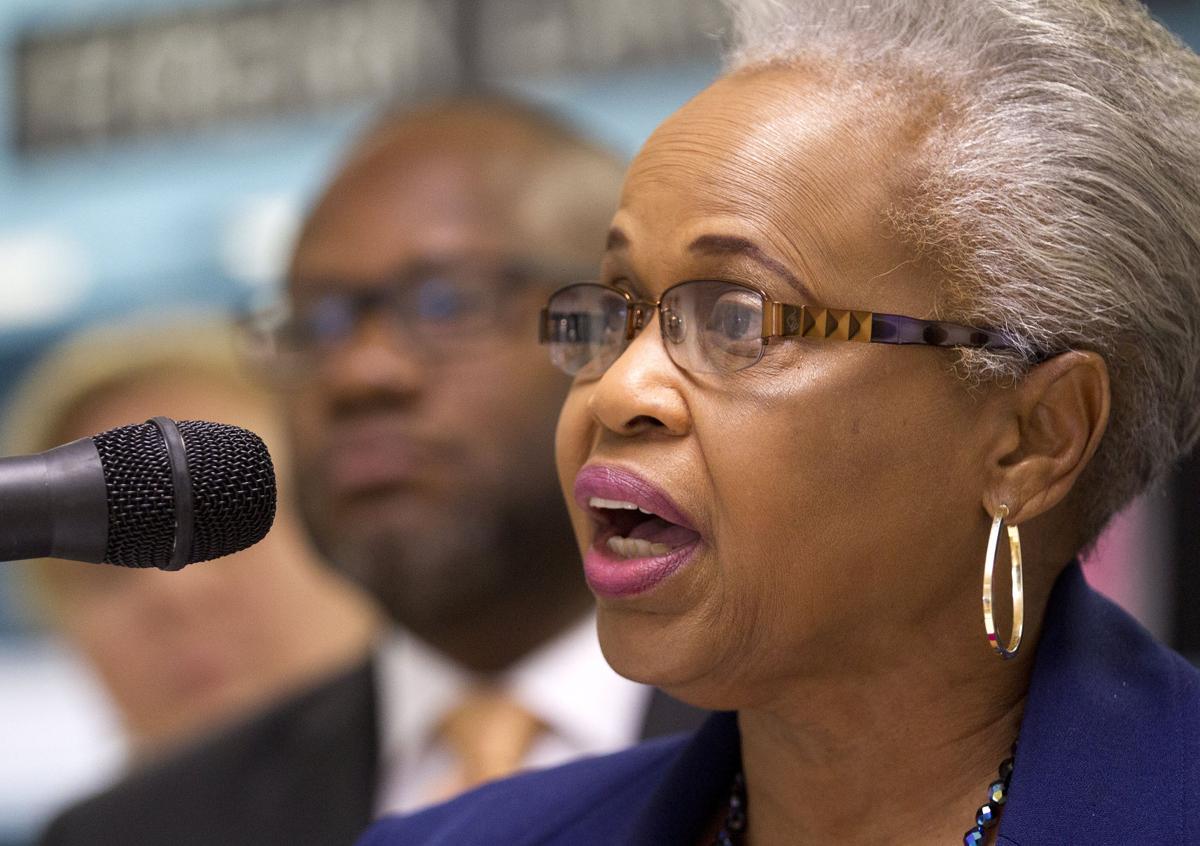 Sen. Gladys Robinson during a press conference regarding House Bill 13 at the office of the Guilford Education Alliance on Pomona Drive, on Tuesday, April 18, 2017, in Greensboro, N.C. 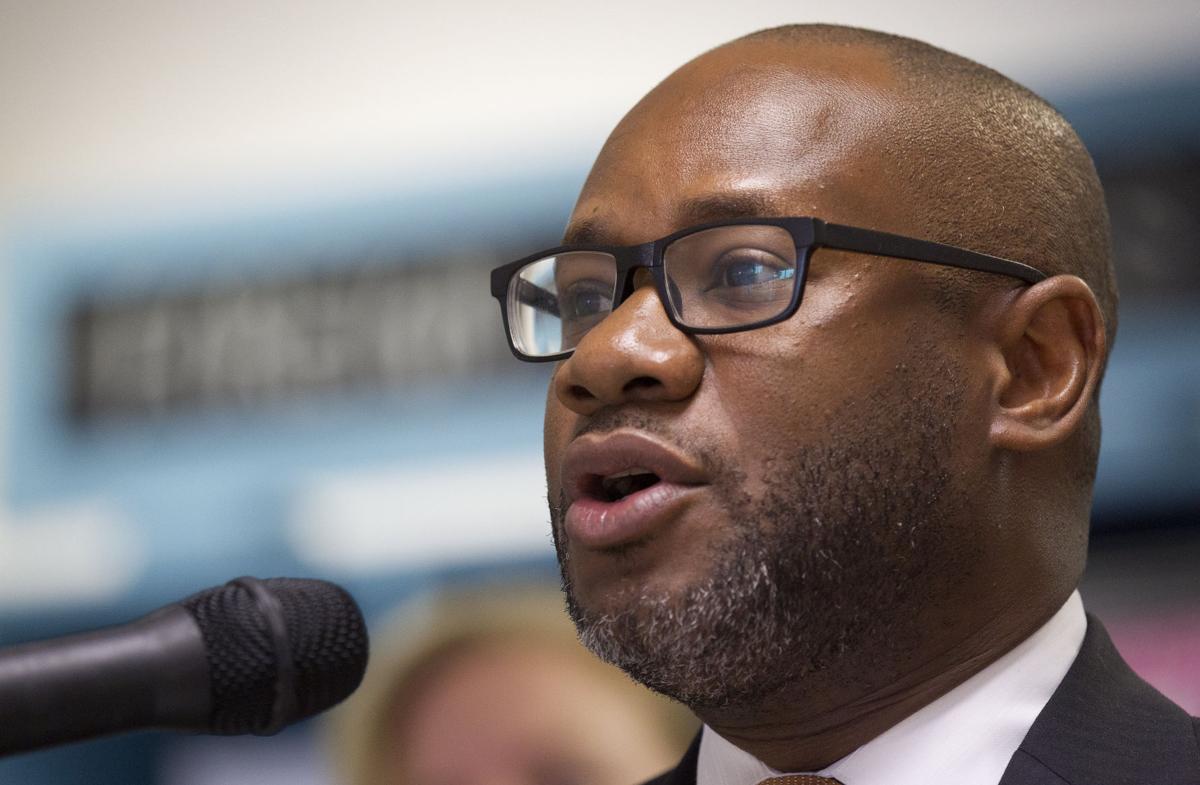 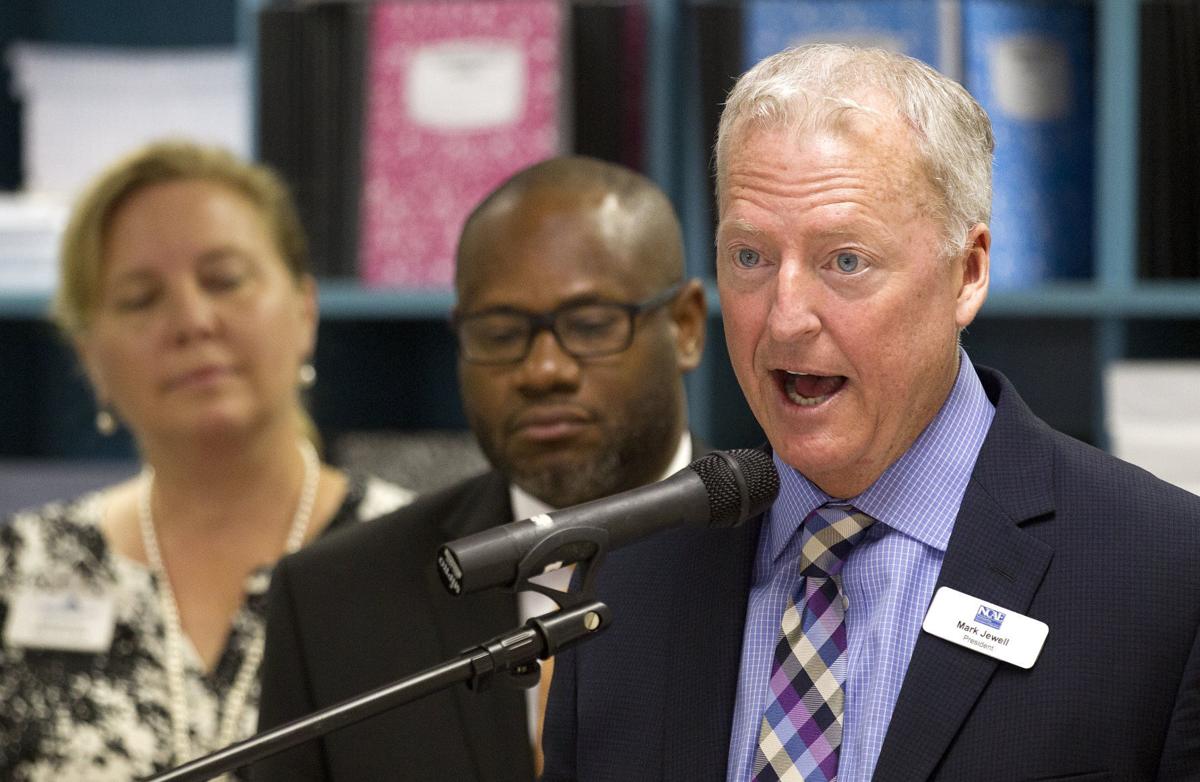 Mark Jewell, president of the North Carolina Association of Educators, said it is offensive to say that the march is Marxist. He said the red fist is a symbol used by civil rights groups. 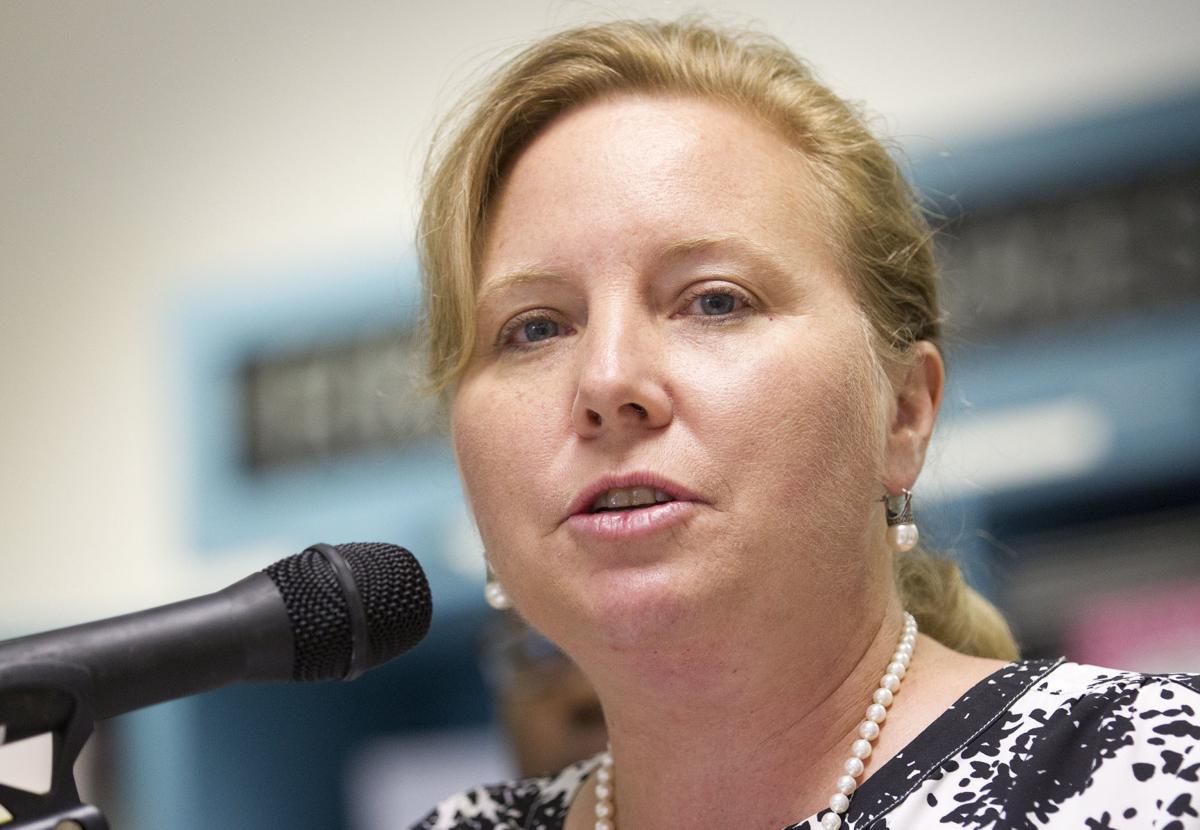 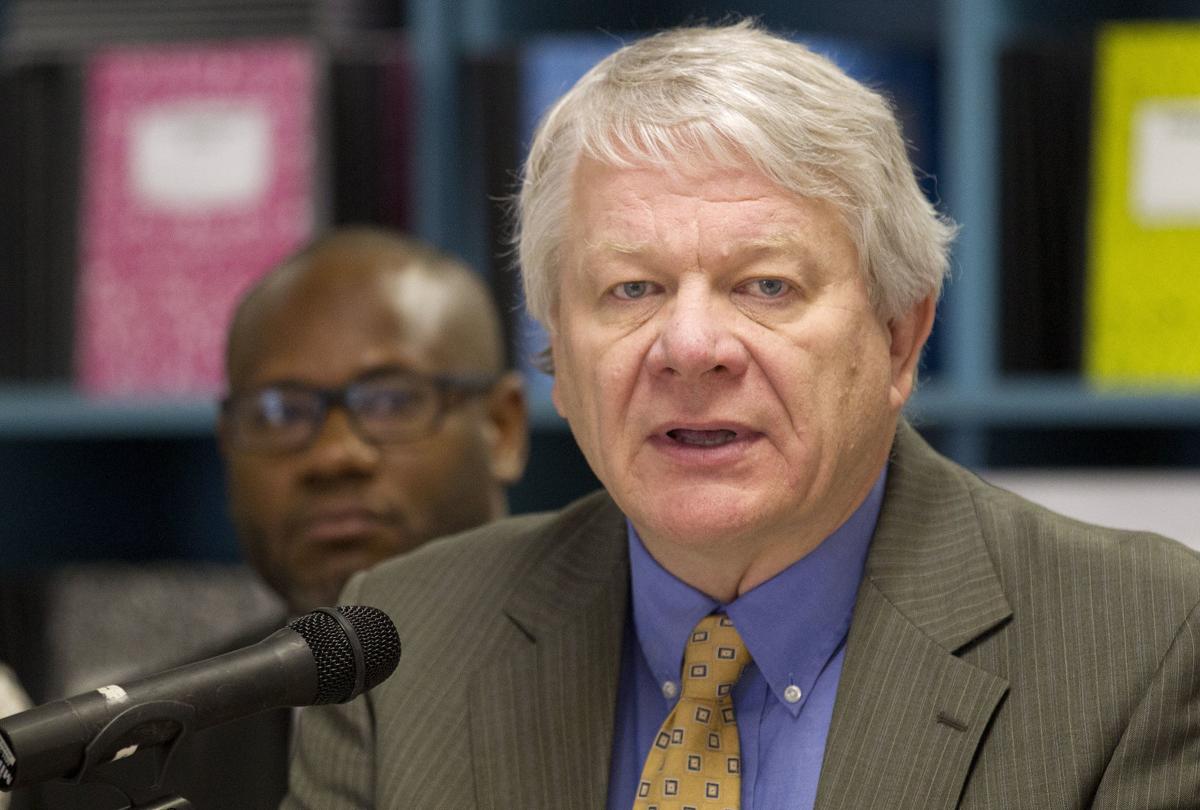 Alan Duncan (Guilford County Schools Board of Education Chairman) during a press conference regarding House Bill 13 at the office of the Guilford Education Alliance on Pomona Drive, on Tuesday, April 18, 2017, in Greensboro, N.C.

Sen. Gladys Robinson during a press conference regarding House Bill 13 at the office of the Guilford Education Alliance on Pomona Drive, on Tuesday, April 18, 2017, in Greensboro, N.C.

Mark Jewell, president of the North Carolina Association of Educators, said it is offensive to say that the march is Marxist. He said the red fist is a symbol used by civil rights groups.

GREENSBORO — A state requirement that school systems in North Carolina reduce K-3 class sizes next school year might seem like it would be popular with teacher groups.

But on Tuesday, Mark Jewell, the president of the state’s largest public school employee organization, appeared at a news conference in Greensboro to say the requirement creates a risk that school systems will cut other areas of instruction and the jobs of current educators. That’s because the state didn’t attach any new funding to the change.

“Once again many of our state public school teachers and teacher assistants are on the edge about whether they will have a job or not, at the end of the school year,” said Jewell, who taught in Guilford County Schools. “Living with this kind of fear and uncertainty is not productive for our educators. It is not productive for our students, our public schools or our school administrators.”

He joined two local legislators, state Sen. Gladys Robinson (D-Greensboro) and state Rep. Amos Quick (both D-Greensboro), as well as Alan Duncan, the chairman of the Guilford County Board of Education, and Winston McGregor, the executive director of the Guilford Education Alliance.

They struck a note of urgency in supporting House Bill 13, a measure that would partly dial back mandated class-size decreases set to go into effect in the 2017-18 school year. The N.C. House unanimously approved the bill, they said, but it has been stuck in the N.C. Senate’s rules committee for the past two months. Republicans control both chambers.

“With talks of tax cuts and court-packing taking up most of our time in the Senate, little has been said about House Bill 13 and what is on the line if we don’t take action,” Robinson said. “We are wasting time on foolishness when we should be focusing on the education of children in our state.”

The state legislature originally passed a class-reduction mandate as part of a much-larger appropriations bill in 2016.

A big decrease in class size would force many school systems across North Carolina to go on a simultaneous hiring spree for K-3 classroom teachers in the midst of a teacher shortage, risking an inability to find quality teachers, school leaders have stressed.

Data provided by Guilford County Schools at the request of the News & Record shows that on the 20th day of school this school year, class size for K-3 classrooms ranged widely. The smallest regular class on that day was a third-grade class with 10 students at Southern Elementary. The largest was a third-grade class at Kirkman Park Elementary with 33. Those are outliers.

The school system can’t move students between schools to even out class sizes and sometimes enrollments can be unpredictable, central office administrators for Guilford County Schools said in an interview. They said the school system works to correct teacher-to-student ratios that are above the 24-student limit through such strategies as splitting classes or employing two full teachers to serve the same class.

Officials with Guilford County Schools have said they expect class-size reductions to cost the system more than $16 million, unless HB 13 passes, in which case they would cost more than $4 million. Either way, they are likely to make up at least some of the money with cuts to other aspects of the school system.

For example, Superintendent Sharon Contreras is proposing cutting 50 teaching assistant positions to help make up class-size-reduction costs. That’s part of her budget proposals, based on the lesser hit from HB 13.

Duncan said HB 13 isn’t perfect. As a bill, it’s not really what he would prefer to promote in an ideal world.

“I can stand up and cheer for it in comparison to the alternative, because it’s a quarter of the cost of the alternative,” he said. “I think that it’s the best we can do that right now, so I ask you to do that.”

Find more photos and video in the digital version of this article.

That was about $1 million more than budgeted, and was covered through contingency funds set aside for unexpected enrollment increases, said Chief Financial Officer Angie Henry.