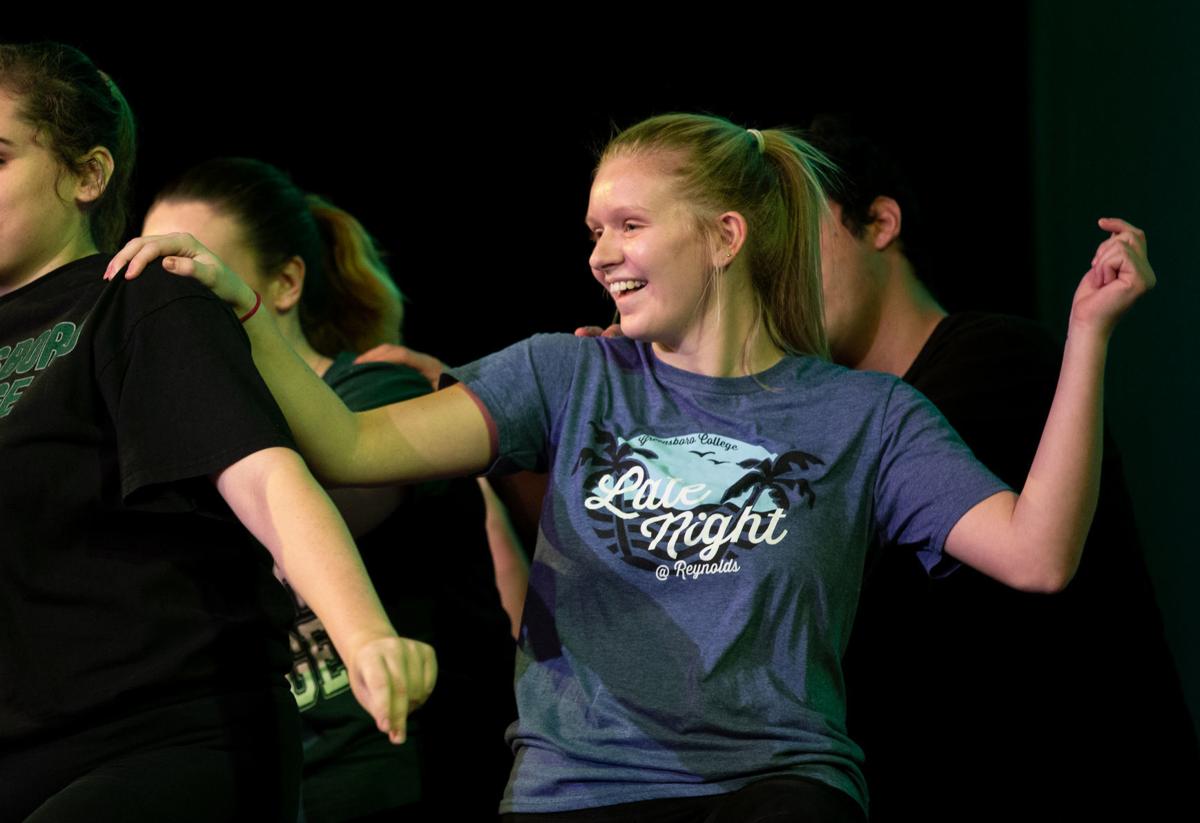 Hannah Soots performs for her Jazz I class final during Showcase Day at the Gail Brower Huggins Performance Center at Greensboro College in Greensboro, N.C., on Tuesday, November 19, 2019. 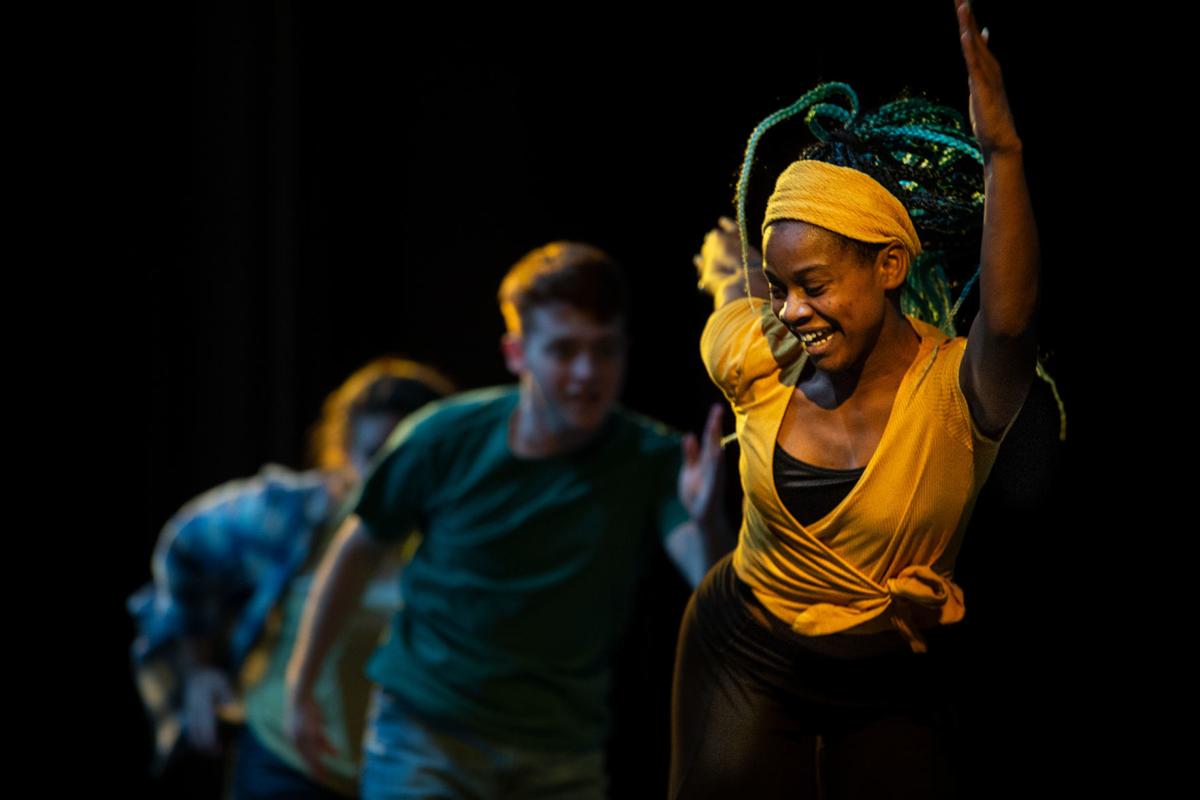 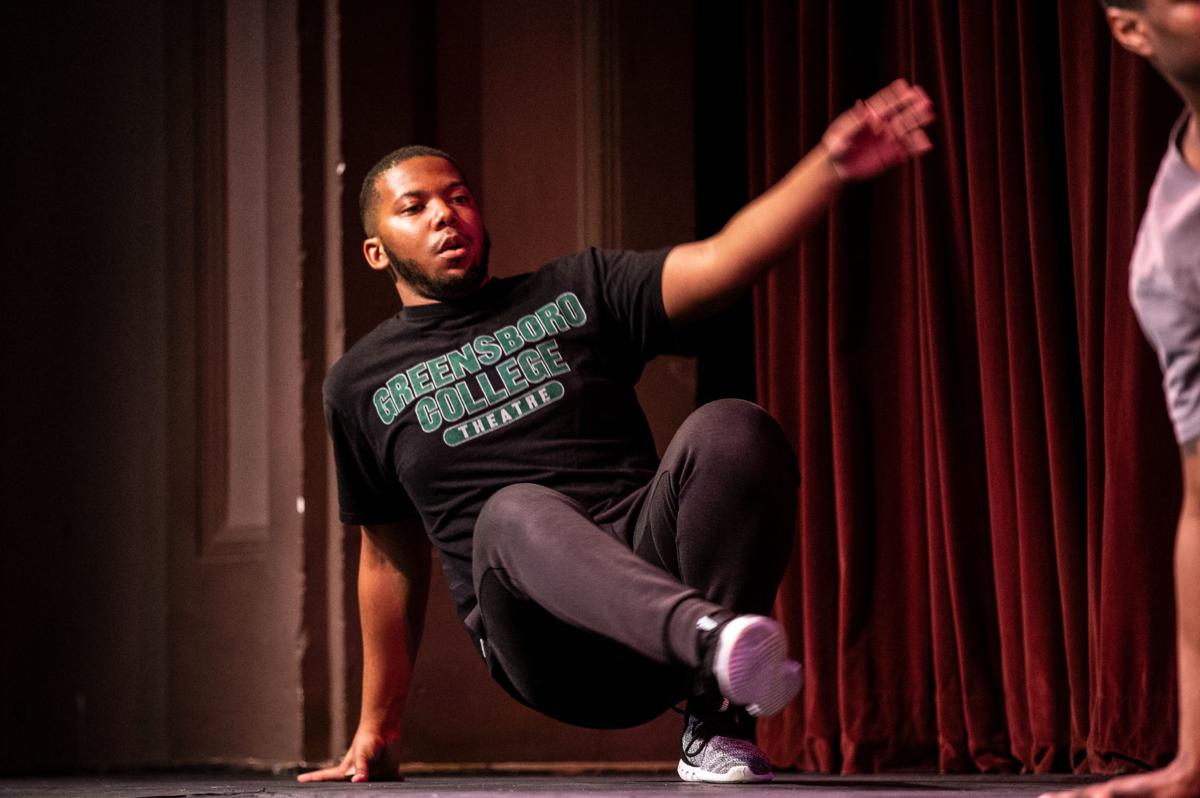 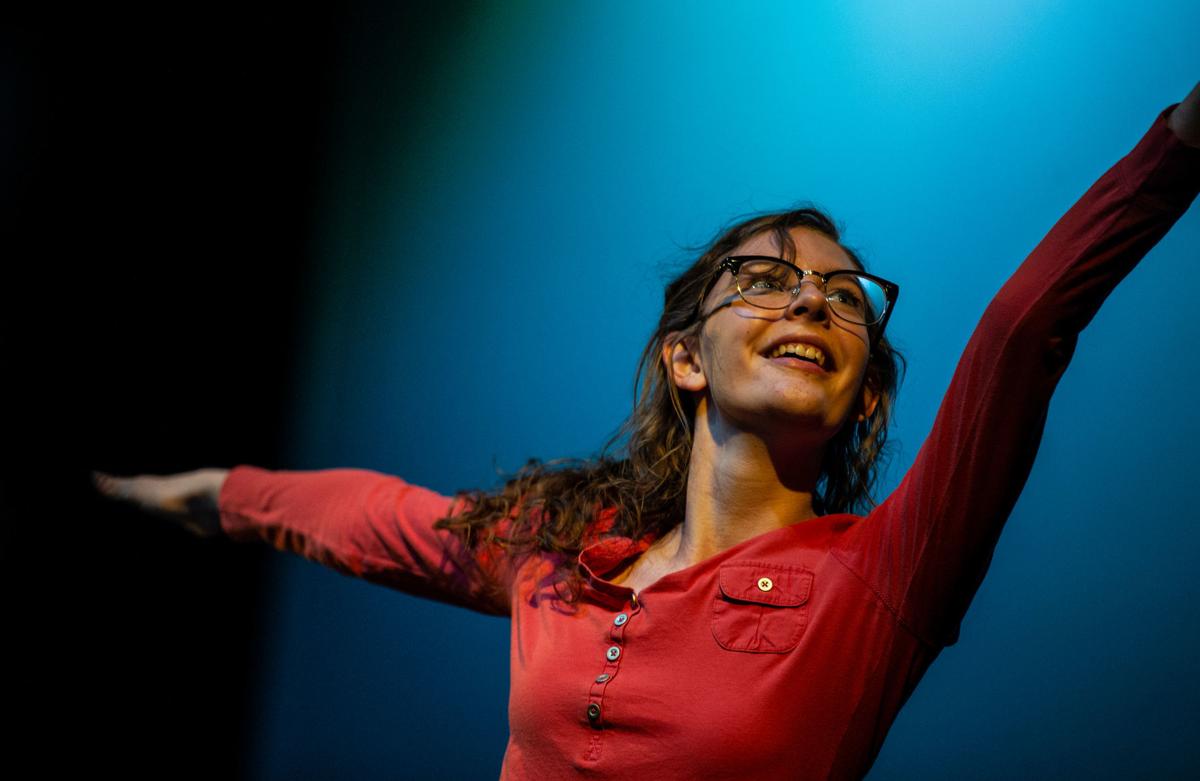 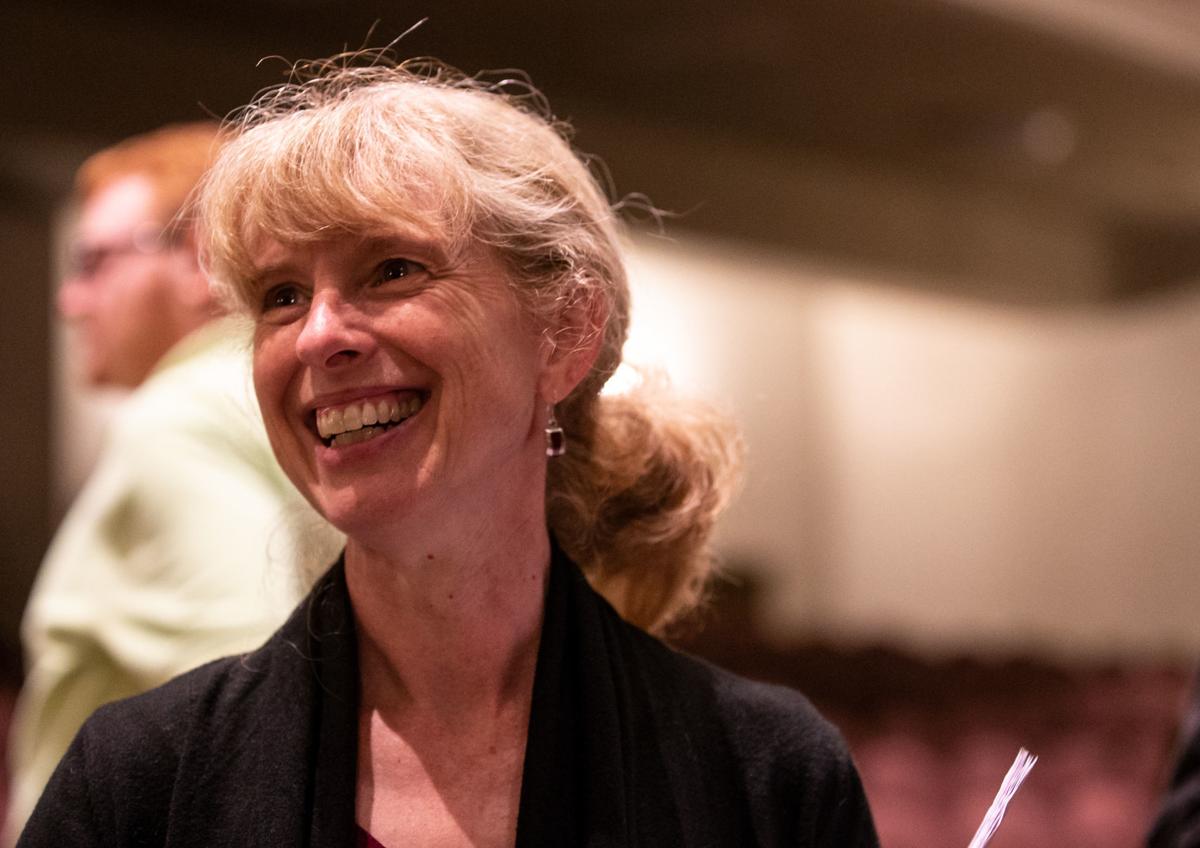 Ashley Hyers, assistant professor of dance, laughs with a student after Showcase Day at the Gail Brower Huggins Performance Center at Greensboro College in Greensboro, N.C., on Tuesday, November 19, 2019.

Hannah Soots performs for her Jazz I class final during Showcase Day at the Gail Brower Huggins Performance Center at Greensboro College in Greensboro, N.C., on Tuesday, November 19, 2019.

Ashley Hyers, assistant professor of dance, laughs with a student after Showcase Day at the Gail Brower Huggins Performance Center at Greensboro College in Greensboro, N.C., on Tuesday, November 19, 2019.

GREENSBORO — When college students return to campus from the Thanksgiving break, they'll have a few more days of classes before they take final exams for the fall semester — three hours of remembering and writing as much as they can of what they've learned since August.

But some Greensboro College students have already knocked out a few of their finals. Students in some performing arts classes gave public recitals or performances this month in front of live audiences. Those shows double as their finals.

The reason? Greensboro College professors say performing arts can be taught in a classroom. Fundamentally, though, dances, plays and songs are meant to be performed.

By making her dance students put on a performance instead of sitting for a traditional exam, "it's a chance for them to show me that they know the steps and that they're good enough to be in front of an audience," said Ashley Hyers, assistant professor of dance.

It's two Fridays before Thanksgiving, and Natalie Craven's hands are sweating and her heart is beating fast.

Craven has been playing piano since she was 6, and she has practiced at least two hours a day since her freshman year at Greensboro College. But 75 people are waiting in the college's chapel for her to start her senior piano recital, and the senior has a case of the nerves.

At Greensboro College, music performance majors are required to put on two recitals before they can graduate, and one of those must last an hour. Music education majors — prospective teachers like Craven — must do one recital that lasts for at least 30 minutes.

"That's the essence of music. You've got to perform it," said Jane McKinney, chair of the college's music department.

The public recital, she added, "is a great thing for (students), frankly. It's not just an academic performance."

The recital is the culmination of everything these aspiring musicians and music teachers have learned in their time on campus. First, though, music majors must run through the gauntlet known as the jury.

The jury is a closed-door private performance in a faculty office or classroom held at least a month before the student recital. The jurors — three music professors — listen as each student performs the pieces they intend to play at their recital. A thumbs up means the recital goes on. A thumbs down means a student needs more practice.

Craven's jury signed off on her recital songs, several of which she had been practicing since her junior year. Her recital, then, would go on with a pair of Bach pieces, a Haydn sonata, Claude Debussy's "Arabesque," a hymn and a pair of duets, one with a singer and one with a saxophone player.

The jury experience is high-pressure and valuable, Craven said.

"They're giving their time and feedback so you can sound the best you can," she said. "Your actual recital is the real deal — and you have to have everything as perfect as you can."

But on that Friday night, when her piano teacher, David Fox, stepped into the chapel to introduce her, Craven had to give herself a pep talk. The audience — college classmates, other music majors, her family from Archdale and members of her church — was waiting.

"I told myself, 'Natalie, there is no reason for this. You are prepared,'" Craven said.

A few deep breaths and 45 minutes later, Craven was done.

The recital went well, she said. "I was pretty proud of myself."

The audience agreed. She got a standing ovation and bouquets of flowers from her uncle, brother and a boy from her church.

"I was really relieved because it was over," said Craven, who will be student-teaching at a Greensboro elementary school in the spring semester. "It was a lot of pressure off me."

Grades won't come out until mid-December. But McKinney said students who can impress a jury of music faculty and perform well at their recital usually will get a high grade.

The week before Thanksgiving, Greensboro College cancels classes for a day so its students and faculty can take part in Showcase Day.

Starting at 8:30 a.m. and running until dinner time, Showcase Day gives students a chance to, well, showcase their research and classwork from the semester. There are poster presentations, seminars and art displays all over campus.

That afternoon, music and dance students took the stage inside the Gail Brower Huggins Performance Center. There was ballet, hip-hop, jazz and tap as well as three more modern routines choreographed by a student. The entertaining 50-minute show finished with songs from "The Sound of Music," "A Chorus Line" and several other Broadway shows.

The students shared hugs and smiles and post-performance exhilaration. For students in some of the dance numbers, there was relief that one of their final exams was in the bag.

Hyers, the dance professor, said the lower-level classes are designed to teach the language and the basic steps of each dance discipline. For students in her ballet and tap classes, their Showcase Day performances are worth 10% of their semester grade.

Hyers, who films each performance, said she's looking at how well students can do the dance steps. She's also watching to see how students react if they flub a move.

"Things happen. It's live. You don't get a second take," Hyers said. "You have to figure out right there in the moment how to deal with (a mistake).

"You miss a step? You jump right back in there. Don't show it on your face and the audience probably won't notice."

Hannah Soots, a junior from Greensboro, is majoring in theatre and aspires to be an actor. She's also minoring in dance to help make her a more versatile stage performer. Because she's taking ballet and jazz this semester, Soots was on stage for two different dance routines.

Soots said both classes had been practicing their Showcase Day routines for weeks but didn't rehearse on stage until a couple of weeks before the show. The lights, sound and audience of Showcase Day made their final exam performance feel like opening night.

"It's a new kind of energy," Soots said. "You have to trust that you know the steps and you know the dance and what you're doing."

Samuel Walker, a junior theatre major from Raleigh, took a hip-hop class to round out his performing skills. He thought his hip-hop performance went well, "but there's always room for improvement."

When Walker gets back from Thanksgiving break, he still must take several sit-down final exams. But he said it's nice to have one final out of the way and get applause for finishing it.

A family with century-long ties to the local private college has set up a new scholarship fund.

The Willie and Lisa Bullock Athletic Training Center occupies the site of a former swimming pool in Hanes Gym on campus.

The college will cut tuition and fees by more than a third for the 2019-20 academic year. Only one other private college in North Carolina has made such a big cut to its sticker price.

An estate gift from a Virginia couple will establish an endowment fund for the college's art department.